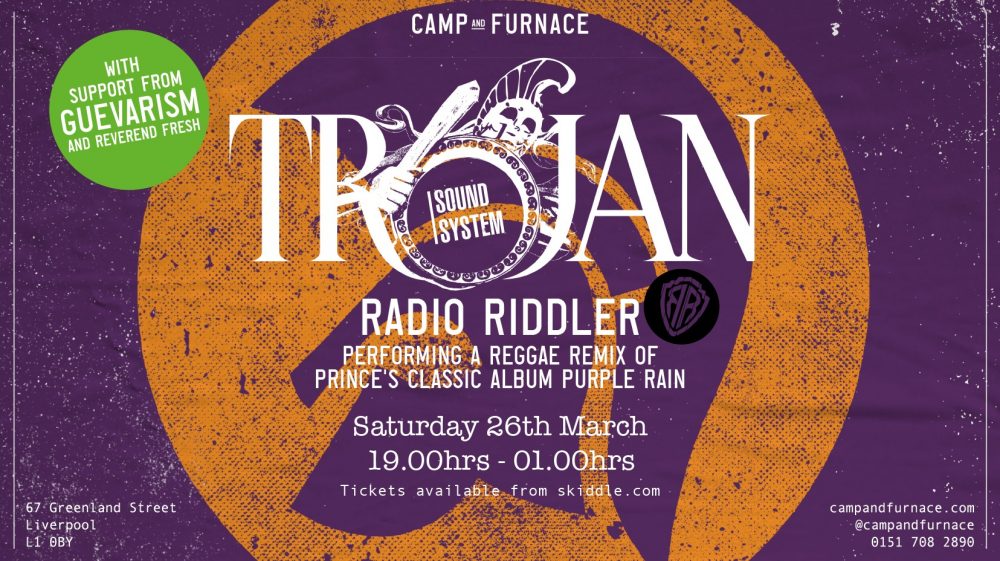 Reggae icons Trojan Sound System are to return to Liverpool for a major event with Radio Riddler, who will perform a dub version of Prince’s classic Purple Rain album.

The critically acclaimed London-based institution play music to satisfy the purest of vinyl collectors while introducing a new generation to the roots of Jamaican culture and music.

Trojan Sound System is a phenomenon, known for having the power to transcend age, race and political barriers through music from selecta Daddy Ad ignited by uplifting vocals from MC trio Supa 4 Creation, Chucky Bantan and Jah Buck.
The idolised quartet have headlined club shows and festivals with some of the biggest names in reggae, such as The Wailers, Luciano, Sly and Robbie, who passed away last week, and the late, great, Gregory Isaacs, to name a few.

Trojan Records was founded in 1968 and was one of the many labels in the UK that fed the ska, rocksteady and reggae craze sweeping the country.

Legendary DJ and filmmaker Don Letts has said Trojan “untied black and white youth on the streets, dance floors and at school [sowing] the seeds for the UK’s love affair with Jamaican music”.

Trojan’s name comes from the Croydon-built truck that was used by Duke Reid in Jamaica, which had ‘Duke Reid – The Trojan Kind of Sounds’ painted on the sides.Reid’s sound system was known as the Trojan Sound, which became synonymous with the new and hip music of the time.

Trojan Sound System formed in 2004 and they relentlessly tour the globe, representing the most seminal reggae and ska record label in history.

Daddy Ad, selecta from Trojan Sound System, said: “Liverpool is a very special place for music and culture and reggae is part of that magical DNA.

“Being invited back to play at the Camp and Furnace after the last few years of hibernation is beyond exciting!’

“We’ll be bringing the love and the bass and have a new album coming out next year celebrating our label’s catalogue and influence over the last 50 plus years, along with our team of vocalists bringing the vibes. Bring it right now!”

The four pioneers of reggae will be joined at Camp and Furnace on Saturday 26th March by Radio Riddler, founded by members of NYC band Fun Lovin’ Criminals.

“Nobody is going to do something better than him, but there is scope to do something that maybe he didn’t think of. We were amazed how well Prince’s music translated to reggae.
“It has our own slant on it and that’s the essence of Jamaican music.”