VIDEO: All the info you need on Liverpool Acoustic Festival…

We caught up with the festival organiser Paul Dunbar for all the info you need. Check out the video above.

On Friday 18th and Saturday 19th March 2016, Liverpool Acoustic and LLTV will be hosting an array of talented acoustic musicians performing ‘in the round’ in the Unity Theatre’s flexible, top floor performance space Unity 2. This is an ideal opportunity to get up close and personal with the musicians as each intimate set will be followed by an opportunity for audience members to question the performers about musical influences, songwriting techniques, and anything else that comes to mind!

16 year old singer-songwriter Lewis Maxwell is a previous LIMF performer and veteran of two national Teen Stars competitions. He’ll be opening the proceedings in Unity 2 at 6.15pm on Friday 18th March. He is followed at 9.15pm by the Country-tinged songs of Omagh singer-songwriter Karen Turley. Finishing off the Festival‘s Friday programme is Joseph Topping, who’ll be filling the late night 11.15pm session with a blend of bluesy Delta-style slide guitar accompanying original songs alongside modern reinterpretation of classic folk songs.

5.00pm on Saturday also sees a discussion panel on the topic of ‘Female is not a genre’ where Roxanne de Bastion, Kaya Herstad Carney, Jo Bywater, and Eleanor Nelly will be considering issues faced by women in the music industry. This is sure to be an interesting and lively debate, and everyone is welcome to attend and contribute to the discussion.

In addition to the official lineup, the Unity 2 stage will also be hosting ‘pop up performances’ and interviews from other Liverpool Acoustic Festival performers, and Liverpool Live TV will be there to capture these on video to share with the rest of the world.

Graham Holland, Liverpool Acoustic co-organiser, said:
“It’s great to be back at the Liverpool Acoustic Festival after having so much fun last time round. This year we’re delighted to be moving up to Unity 2 to join our friends at Liverpool Live TV for what is set to be an incredible two days of live music.”

The annual music festival takes place at Unity Theatre andLiverpool Philharmonic Music Room and a ‘free fringe festival’ programme sprawls out to venues all along Hope Street for what will be a captivating and inspiring event to kick off the festival calendar. 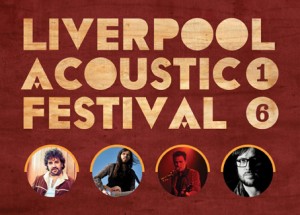 Now in its third year, the Liverpool Acoustic Festival has grown out of Unity and onto the historic and unique street in Liverpool’s cultural quarter, and boasts intimate live performances from some of the most highly regarded UKacoustic acts, including the award-winning and acclaimed Scott Matthews, British blues/rock heavyweight Marcus Bonfanti, Liverpool legends Ian Prowse, Ian McNabb, Tommy Scott and Paul Hemmings along with rising stars Robert Vincent, Gary Edward Jones, Stephen Langstaff, LIMF Academy award winner Eleanor Nelly in addition to over 50 up-and-coming Liverpool artists.

Other highlights of the festival include a specially commissioned work inspired by former Hope Street resident Adrian Henri. Liverpool I love your horny handed tons of soil by Lizzie Nunnery, Vidar Norheim and Martin Heslop will form the centre of a Phrased & Confused stage (Friday night) fusing music and spoken word.  Other artists appearing as part of P&C stage include Ana Silvera, Mark Grist and Hollie McNish. Renowned live music promotersLiverpool Acoustic and Mellowtone will programme two stages of eclecticacoustic music, including an all-female stage at Unity with live performances, Q&As and a seminar on women in music. Finally the festival will also play host to special guest events and masterclasses featuring some of the best musicians and music industry experts in the country.

The festival is kindly sponsored by the 60 Hope Street Group.

Paul Dunbar, Festival Director said about the festival:
“I’m so excited for the festival this year, it’s our third time out and it seemed the logical step to push out of the walls of Unity and onto Hope Street, bringing a bigger offering of acoustic music to the city and a great vibe and buzz around and along Hope Street. All the acts are amazing and I can’t wait for all venues to showcase the incredible talent that Liverpool has to offer. Enjoy!”

Matthew Linley, Artistic Director and CEO of Unity Theatre added
“The Acoustic Festival was one of the first things I witnessed when I first arrived in Liverpool last year.  Lots struck me – the fantastic music, the huge potential of the festival and the warmth and friendly nature of the vibe.  So it’s incredibly exciting to see the festival spread out this year from its natural home of Unity, and, via our friends at Liverpool Philharmonic, out and across what is one of the most extraordinary streets in the UK – Hope Street”

Richard Haswell, head of programme Liverpool philharmonic said
“The opening of The Music Room means Liverpool Philharmonic has a great opportunity to work with artists and festivals in Liverpool in a whole new way. It’s great that the festival is embracing the whole of Hope Street and we are delighted to be playing our part.”

A full line up and festival schedule will be published closer to the event at liverpoolacousticfestival.co.uk