Watch as we take you on board HMS Iron Duke for Armed Forces Day - The Guide Liverpool
Contact Us Advertise with The Guide Our Video Services Follow us: 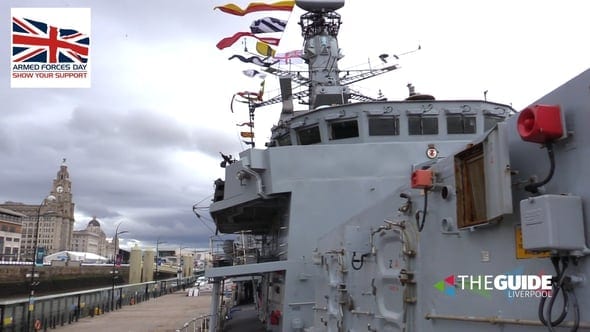 We got a very special tour on board the incredible HMS Iron Duke as it arrived in Liverpool just in time for Armed Forces Day 2017 which is on Saturday 24th June.

Watch as we meet Commander Stephen Banfield who tells all about the vessel, life at sea and why young people should consider joining the Royal Navy.

Visitors to Armed Forces Day can get a tour of the decks from 12pm on Saturday.

The current Iron Duke, which was commissioned in 1993, and the frigate is seen as a strong indicator of the UK’s commitment to security in domestic waters and ongoing support to civil agencies by the Armed Forces.

Her role: built as a submarine hunter, but in the 20 years since the fall of Communism, the frigate has proven her versatility by dealing with virtually every mission imaginable in the four corners of the globe.

It is also responsible for training the next generation of Royal Navy sailors while patrolling UK waters.

We think you’ll agree she is pretty special – watch the video above.

For more on Armed Forces Day head to the website here.