Watch for all the info you need on the 'Liver Birdsong - The Liverpool Blitz Musical' - The Guide Liverpool
Contact Us Advertise with The Guide Our Video Services Follow us: 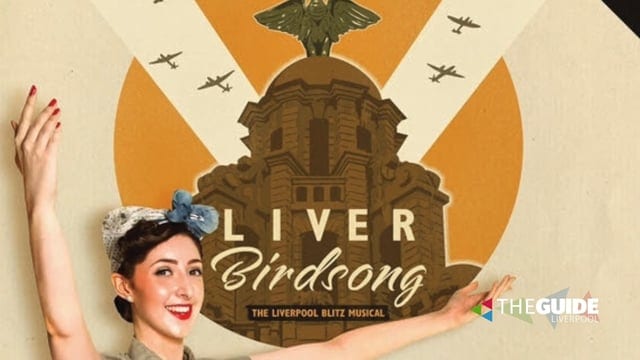 The Epstein Theatre will be turning back the clock to the 1940s just in time for the premiere of a new commemorative war-time musical – Liver Birdsong – The Liverpool Blitz Musical which opens on Tuesday, 29th November and runs until Saturday, 3rd December 2016.

We met the cast and team behind the production – watch our video and find out all you need to know above.

For the duration of the show, audiences arriving at the Epstein ,which will be renamed Cranes Theatre for the occasion, will be greeted by ushers in their 1940s uniforms and serenaded by bluegrass artists whilst enjoying food and drink from the Forties including a glass of London Pride and authentic wartime sweets to munch on while they enjoy the show.

The Theatre has received £46,300.00 from the Heritage Lottery Fund (HLF) to launch the project and felt that the premiere of the new Blitz Musical would be the perfect opportunity to explore the Theatre’s heritage and are encouraging the audience to participate by dressing in 1940s attire!

Liver Birdsong – The Liverpool Blitz Musical commemorates the 75th anniversary of The Blitz, and is brought to the stage by Birdsong Live Productions CIC.

The show is produced by Birdsong Live Productions CIC, who are father and daughter team Tony Bradley and Rebecca Myers. Liver Birdsong is their first joint venture into professional musical theatre, although each has a background in theatre, music or television.

The story of Liver Birdsong remembers The Blitz, when Liverpool was bombarded by the German Luftwaffe during World War II.

An emotionally charged and heart-warming musical, the production is packed with 18 brand new songs, delivered by a professional musical theatre company and a live band.

A talented cast and creative team have been brought together by Tony and Rebecca following months of auditions and searching for the right crew.

The musical is set on the night of 28/29 November 1940, in the early phase of the Liverpool Blitz. The events of that night were, later described by Winston Churchill as “the worst single (civilian) incident of the war”. It involved a direct hit by a parachute bomb on Durning Road Air Raid Shelter near Edge Lane, which killed 180 people.

Although the production is entirely a work of fiction, it is based on the facts of that night and the first-hand experiences of women – much like the four ‘Liver birds’ in the show – from one of Britain’s largest wartime munitions factories.

Join the ‘Liver birds’ – Maggs Williams, Carla Evans, Daisy Mae Beech and ‘Cockney’ Lil Ford from Kirkby Munitions Factory – as they battle not only the Nazis but also their own threats, fears and jealousies. Will they overcome their troubles and find hope?

Theatre manager, Rebekah Pichilingi, said: “We have been busy researching the history of the Epstein which has had several different names since it first opened as The Crane’s Music Hall in 1913.

“At every point in its history the theatre has been an essential part of Liverpool’s creative scene and has left visitors from all over the world with countless happy and life enriching memories.

“Liver Birdsong tells the story of The Liverpool Blitz which gave us the perfect excuse to turn back time and transform the Epstein back into The Crane Theatre.

“We hope the audience will join in the spirit of the 1940s with their tea dresses, peplums, Zoot Suits and Victory Rolls!”

To book tickets call 0844 888 4411, visit www.epsteinliverpool.co.uk or book in person at the Epstein Theatre box office (open Monday to Thursday from 2pm to 6pm, or Friday and Saturday from 12pm to 6pm).

*Tickets include a 50p restoration levy per booking