WATCH: Life is a Cabaret at Grand Central Hall - Find out about 'Sunday at The Grand - The Guide Liverpool
Contact Us Advertise with The Guide Our Video Services Follow us:

WATCH: Life is a Cabaret at Grand Central Hall – Find out about ‘Sunday at The Grand 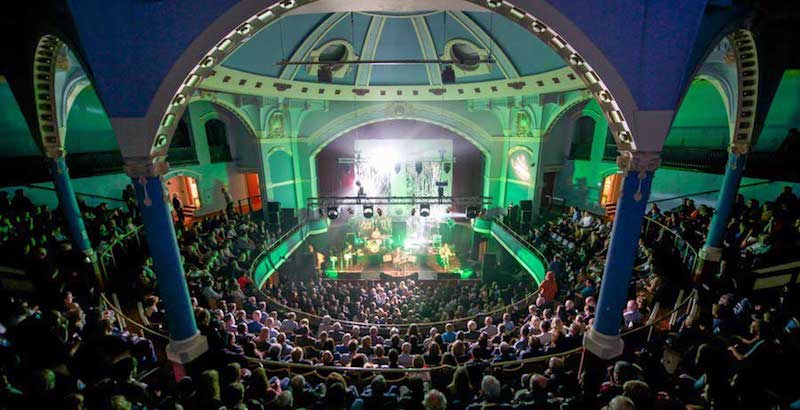 Home › Culture › WATCH: Life is a Cabaret at Grand Central Hall – Find out about ‘Sunday at The Grand

Sunday at The Grand is the latest addition to a popular programme of events launched by the venue. The dinner show will provide opportunity for all the family to enjoy a Sunday roast and live entertainment in the iconic domed theatre on Renshaw Street.

Grand in nature as well as in name, this Grade II listed architectural gem of a building has been a go-to destination for eating, drinking and sleeping in the city centre since it’s relaunch in 2018. A former Methodist church, former cinema and former home to the Liverpool Philharmonic orchestra, to name but a few of the building’s past iterations, Grand Central now houses a 47 room hotel, a bustling food bazaar and, it’s crowning glory, the 1,100 capacity Grand Central Hall.

It is against the impressive backdrop of the hall itself that the cabaret will take place. Organised in association with live entertainment producers Curtis Productions, tickets are already selling quickly for Sundays in March. The launch event on Sunday 10th will see vocal harmony trio The Livertones grace the stage to entertain diners from 4pm. Along with great entertainment, guests will also enjoy a mouth-watering Sunday roast, prepared with locally sourced ingredients by Grand Central Hall’s head chef.

Ryan Edwards, operations director of Grand Central Hall said, “Grand Central Hall is one of the most impressive event spaces in the city and we’re looking forward to showcasing it to full effect with this new weekly event, Sundays at The Grand.

“We’ll be pairing great food with fantastic entertainment from our resident Grand Theatre Cast, who will be joined each week by special guest acts. So far our launch event on 10th March and Mother’s Day on 31st are proving the most popular dates but we’ll be putting on a great show every week.”

Sunday’s aren’t the only opportunities to see live entertainment at Grand Central Hall. The hall has a packed event programme, with upcoming highlights including an evening with singer, songwriter and musician Paul Young and another with Scottish rock band Idlewild.

Liverpool Jazz Club take up residency in Grand Central Bazaar every Thursday from 8pm and Sunday from 5pm. With seven themed bars, including a rum bar, an Irish bar and a cocktail bar everyone’s tipple is catered for in the bazaar, which also serves food from 12 independent food vendors every day from noon (8am on Sundays).

Ryan continued, “Thursday and Sunday jazz nights at Grand Central Bazaar have been a roaring success so far. It’s the perfect setting for a gig because one group of friends can choose from 12 restaurants and seven bars without leaving the room! It’s free entry, then whether you want a pint and a burger, a cocktail and healthy vegan food or a selection of Asian fusion dishes washed down with a tequila from our dedicated tequila bar, the choice is yours.

“Plus, the bazaar has plenty of space so there is no need  to book. Just turn up on Thursday and enjoy some great music from Liverpool Jazz Club.”

Tickets for Sundays at The Grand are £22.50, available from Facebook here. Grand Central Bazaar’s full line-up of events can be found here and complete venue information is online at www.liverpoolgrandcentral.co.uk.