Scouse: A Comedy Of Terrors is up and running and on for four weeks this festive season at The Dome, Grand Central, and is being brought back to entertain audiences by Lantern Theatre Productions. It runs through to Thursday 15 December – offering the perfect choice as an alternative show this Christmas.

We met the characters as they started their protest inside St George’s Hall – watch what happened above!

Keen theatregoers will remember the comedy first time round when it was first performed at the Everyman Theatre in 1997. Its original cast list read like a who’s who of the city’s thriving acting and creative talent and the line-up featured Paul Broughton, Andrew Schofield and Vince Pellegrino.

The cast consists of native Liverpool based actors and the supporting crew all have links to the city. The play features 30 characters played by just 10 actors. 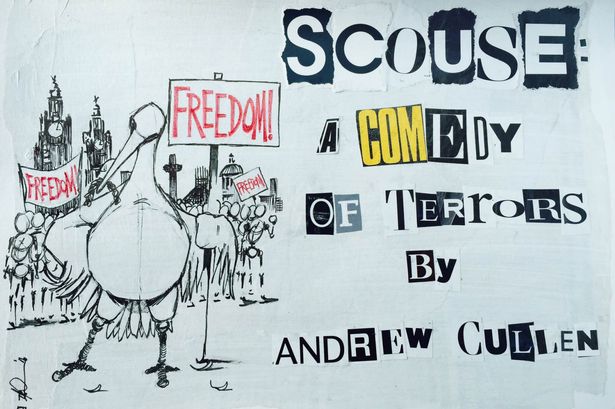 The cast for 2016 features Peter Washington as Tom; Jackie Jones as Kath; Katie King as Susan; James Ledsham as Ben; Curtis Watt as Clive; Reg Edwards as Macka; James McMartin (who played Macka in the original in 1997) as Big Frank; Nicola Ferguson as Lisa; Louise Garcia as Tracey and Michael Hawkins as Darren.

The play is directed by Margaret Connell and the creative team is headed by Jocelyn Meall as set designer.

Lantern Theatre Productions was created following the closure of the city’s Lantern Theatre in July 2016 after the site was sold to developers. In the five years it was open, the Lantern Theatre developed into a genuine fringe venue that supported new writing and emerging artists both locally and nationally. Four plays from its writers group – which were developed through its regular scratch nights – will be staged at Liverpool’s Unity Theatre this Autumn.

The production company was formed by family trio – Margaret Connell, son Daniel Noble and daughter Siobhan Noble, who felt the next natural step for them after the theatre’s closure was to concentrate their efforts in the area of theatre they love the most, the production side.

Scouse: A Comedy Of Terrors tells the story of the Liverpool People’s Party and its calls for Liverpool to be recognised as an independent republic by the UN, the EU, NATO and UEFA. But the UK Government objects and sends in the army. The play follows Tom, Kath and their children Susan and Ben through the bid for independence and the battle and tragedy that follows.

Scouse: A Comedy Of Terrors was written by Andrew Cullen, who has since gone on to critical acclaim for his writing talent. His short story, The Six Day War, won the London Writers Award, while his article on Anglo-Japanese relations won the Japan Prize.

Cullen’s credits also include the play Self Catering (A Short History of the World), which won several awards and was filmed by Channel 4 and published by Josef Weinburger plays; Pig’s Ear, a tale of family life during four general elections, won the Peggy Ramsay Award; his first non-fiction book was From Here To Paternity. He has also screenplays for film and television. Andrew Cullen now lives in London with his family.

For more info and for tickets…