This is the emotional moment a father-of-two from Scotland met the parents of a man who saved his life after he received a double lung transplant.

John Coyle, 47 from Cowdenbeath, Fife received the lungs of William Lloyd who was 38 when he passed away after suffering a brain haemorrhage following a fall in 2012.
John was able to thank William’s parents, William Snr, Phyllis and sister Julie Lloyd when they met on the first day of the Westfield Health British Transplant Games in Liverpool. 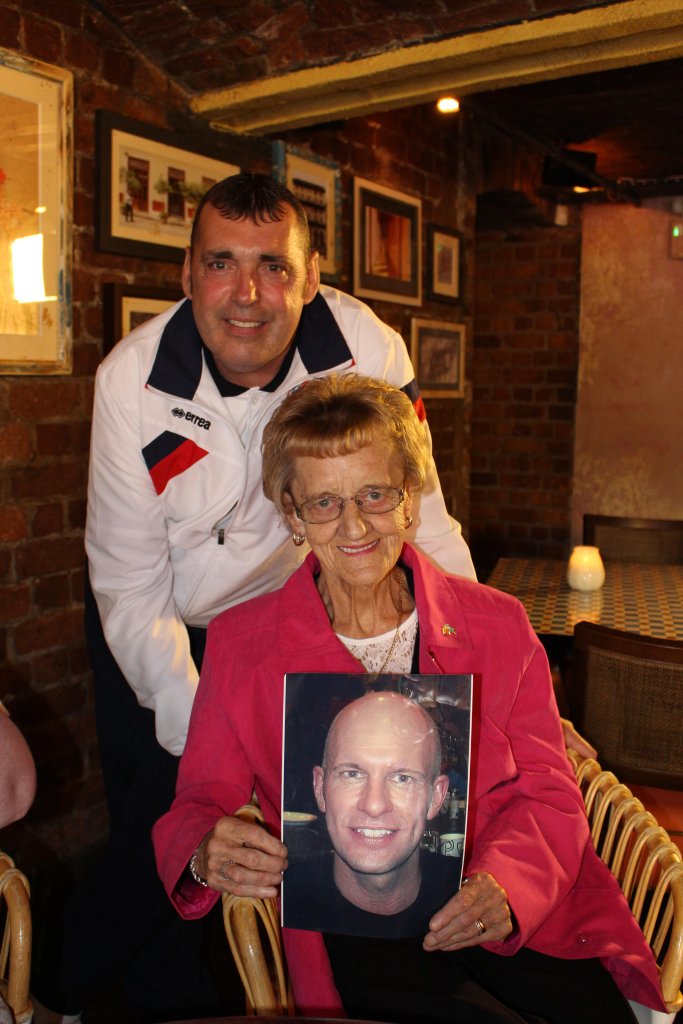 John had started to feel unwell while on holiday in Puerto Rico in 2003. He struggled with shortness of breath for eight years before being diagnosed with Chronic Obstructive Pulmonary Disease (COPD) in 2012 and was given less than a year to live by doctors unless a double lung transplant donor match could be found.
The emotional meeting comes four years after their son and brother William, passed away, with John undergoing a seven hour operation to receive William’s lungs at the Freeman Hospital in Newcastle.
Speaking about the meeting, John said, “There are no words I can say to William Snr, Phyllis and Julie to give my heartfelt thanks for the decision that ultimately saved my life. I had never seen a picture of William until today, the man who has allowed me to live my life to the full, for my wife to have a husband and my children to have a dad. It is a very emotional day all round, and I am so proud and pleased to finally meet the Lloyd family and say thank you face to face.” 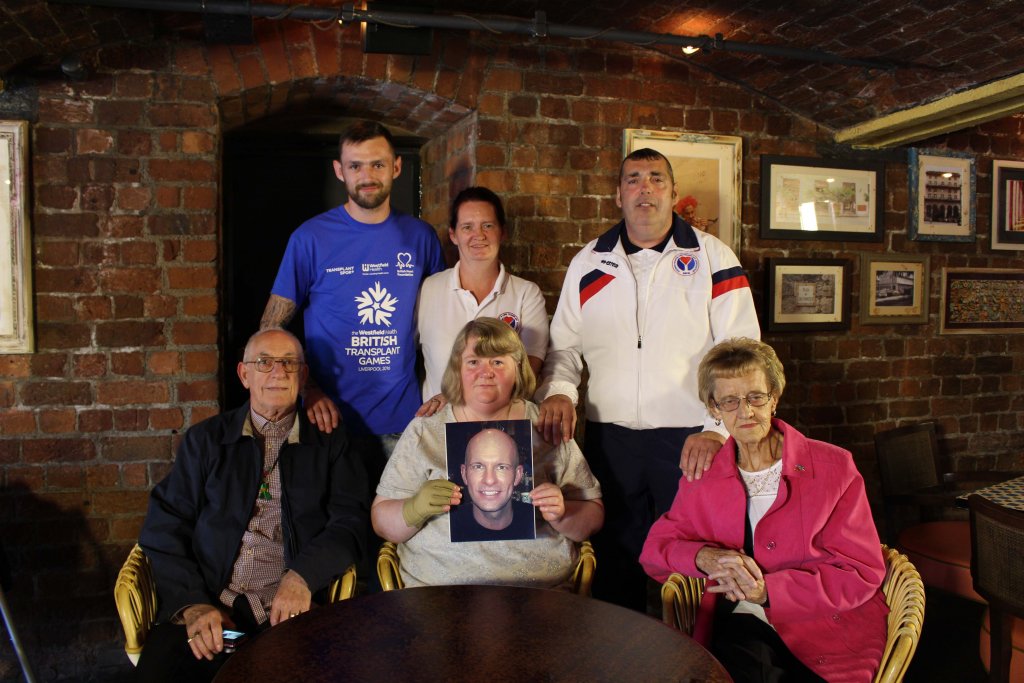 William Lloyd Snr said, “I can’t begin to tell you how much meeting John lifts us as a family through our grief. We will never get over losing William, he was our youngest son, our baby and it was such a shock to lose him so very quickly. Knowing William’s beautiful and generous personality carries on through his gift of organ donation brings such comfort to our family. I’m so proud.”
John and his wife Shirley, 46, had previously connected with the Lloyds through anonymous correspondence managed by transplant coordinators working for NHS Blood and Transplant service. The transplant coordinator at Newcastle Freeman Hospital who was part of the team who looked after John during his transplant was Lynne Holt, who is now a volunteer for Transplant Sport, the charity which organises the Games.
Lynne said, “For a donor family and recipient to meet is a very special and rare moment. The Lloyd family’s decision saved the lives of five others, with William’s wishes honoured on his passing.”
William Lloyd had carried an organ donor card and discussed his wishes with his sister Julie Lloyd.
Julie said, “We were given the devastating news that William was not going to survive his brain haemorrhage and so it was me who mentioned organ donation to the nurses who were caring for him at Arrowe Park hospital in Wirral. William carried an organ donor card, and I knew it was what he wanted.”
While the Lloyd family prepared to say goodbye to their son and brother, 300 miles away in Scotland, John received the news that a donor had been found. He was to make his way immediately to Newcastle Freeman Hospital for the lung transplant he so desperately needed.
“I called my wife Shirley and told her it was time to go. I’d had two false calls for potential transplants in the two months before this final call, so we were not sure whether this would be a positive result for me.” said John.
Shirley added; “The seven hour operation was a nerve wracking time for me and my children Kenneth and Jennifer. We were so relieved that he was finally undergoing the transplant he needed, and knew he was in capable hands with the team at Newcastle Freeman.” 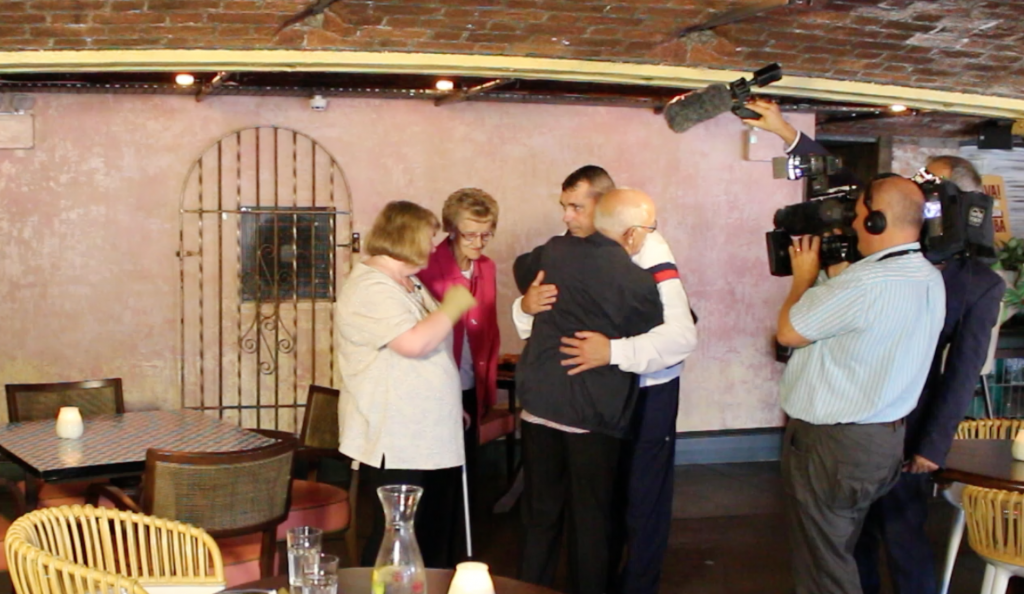 Shirley and her family spent an agonising nine days at John’s hospital bedside, after an unexpected complication from the transplant forced doctors to place John in an induced coma. A further two week stay in intensive care followed, with a total of five weeks in hospital.
“He recovered pretty quickly, all things considered and was itching to get back to work straight away.” added Shirley.
Amazingly, health and safety advisor John, was back at work just three months after his transplant, and the year afterwards completed a gruelling five-day, 98 mile charity walk along the West Highland Way with wife Shirley. Just a year after that, in 2014 John took part in the European Transplant Games in Lithuania and British Transplant Games in Bolton, winning medals for swimming, volleyball and cross-country running.
Phyllis Lloyd, mother of William, said, “In one of the thank you letters that were sent to us by John, he included a medal he had won at the European Transplant Games for swimming. We have this on show in our living room, pride of place, and it is a reminder of how proud we are as a family of what William’s gift of organ donation was able to achieve.”
In total, six of William’s organs were transplanted into five recipients including his heart, both kidneys and liver. The Lloyd family have received letters of thanks from all recipients, which they treasure and refer to often in their times of grief.
John said, “When you have a transplant, you are told the donor’s first name, age and brief details about their passing. The letters between the Lloyd family and mine were able to piece together some more information about William, the man who I owe my life to.”
Shirley added, “Seeing a picture of William today put everything into perspective and was a very powerful moment for us. I’ve always wondered what John’s donor was like, and it is so special to be able to put a face to the man who gave such a gift to us. Julie showed us his handprints, photographs and treasured mementos of William, which allowed us to make an even deeper connection.”
“I also now know I’m half Scottish, half ‘Scouse!” exclaimed John, exchanging smiles and laughter with William Snr at the realisation.
With the two families having now met, the Lloyds are invited as honoured guests at this year’s Westfield Health British Transplant Games which is taking place in their home city of Liverpool.  The Games brings together more than 900 people who have received or are waiting for an organ donation, along with donor families like the Lloyds. The four day celebration of life allows competitors to compete in events such as track and field, swimming, basketball and archery, in gratitude to their donors and donor families. It’s the first time Liverpool has hosted the Games, which has the largest number of competitors in its 38 year history. The Lloyd family will watch John take part in activities including darts and the 5km Donor Run, who hopes with the help of William’s lungs, to bring home more medals from the Games.
“William’s gift has not only given me my life back, but it’s given me a new perspective and a new lifestyle. I have enjoyed a much more active life since my transplant and focused my energy on my family and living in gratitude of my donor, who I now know as William after today, and feel a strong connection with after meeting his family.” said John.
The Westfield Health British Transplant Games has an aim of not only getting people to sign the Organ Donor Register, but most importantly to discuss their wishes with their families.
Lynne Holt who also works as a volunteer for Transplant Sport added, “Currently, 42% of families don’t give consent for organ donation to take place, with the main reason cited as not knowing their loved ones’ wishes. Transplant Sport is campaigning for families to “have the #DonationConversation” and see the current 58% consent rate figure rise to 80% by 2020.”
For more information on the Games, please visit www.BritishTransplantGames.co.uk
Facebook: https://www.facebook.com/BritishTransplantGames/
Twitter: www.Twitter.com/WHBTG
Share