WATCH: The new Merseyside Police Headquarters reaches a new milestone towards completion - The Guide Liverpool
Contact Us Advertise with The Guide Our Video Services Follow us:

A ‘topping out’ ceremony to mark a major milestone towards the completion of Merseyside Police’s new Headquarters took place today.

Merseyside’s Police Commissioner Jane Kennedy and Chief Constable Andy Cooke QPM signed the last piece of steel which will be installed at the £48m centre at the traditional ceremony, which marks the end of the main construction phase of the project.

Once the steel framework is complete, work can begin on kitting out the bespoke four-storey Headquarters, which will act as Merseyside Police’s flagship base on a key gateway into the city centre, overlooking Scotland Road and the entrance to the Queensway tunnel, while helping to regenerate the Everton area.

The state-of-the-art 12,800m2 centre will bring more than 1,100 officers and staff under one roof once it opens its doors in September 2021, freeing up a number of leased buildings and helping the force to save approximately £250,000 a year on its running costs. 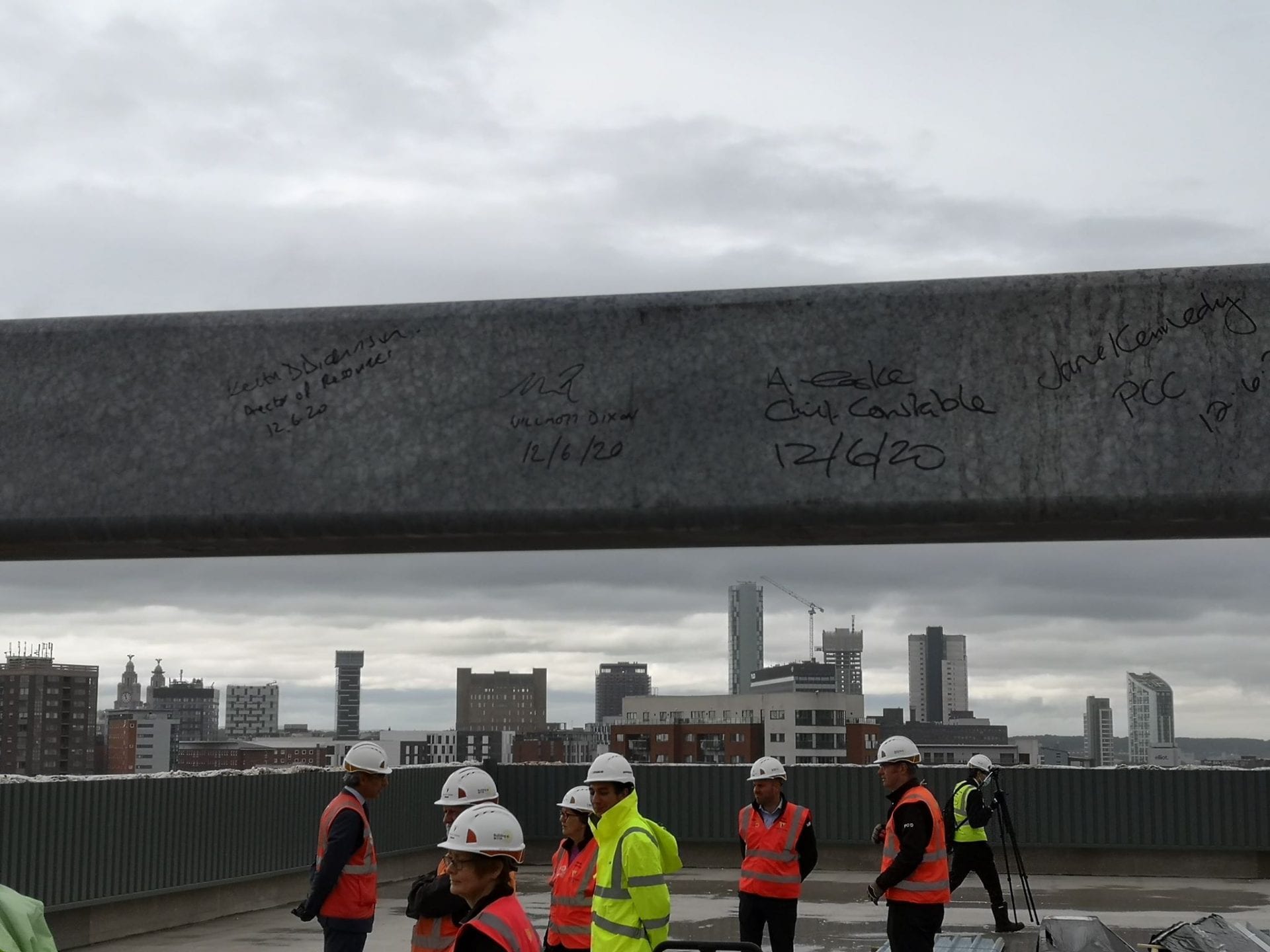 Construction at the site began in September 2019 after the Commissioner and Chief Constable ceremonially turned the first sod at the brownfield site, which is adjacent to the force’s existing station on St Anne Street.

Work on the site has continued apace despite the global Coronavirus pandemic, with social distancing practices being implemented by construction firm Willmott Dixon, in order for today’s major milestone to be reached on time and on budget. 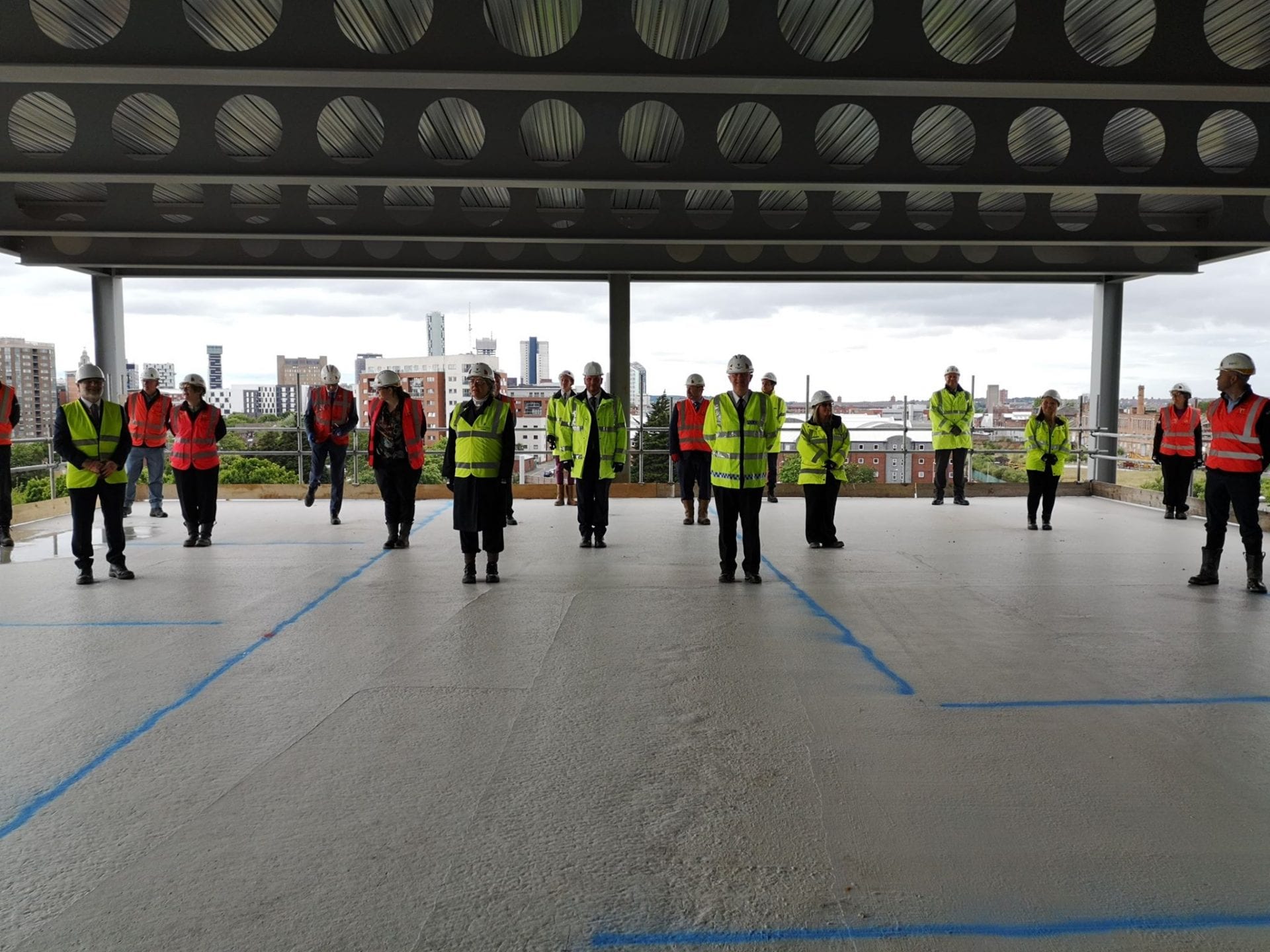 Today (Friday 12th June) the Commissioner and Chief Constable returned to the site to participate in the ‘topping out’ ceremony, take a tour of the site and see how work is progressing.

“What an achievement! Last September, the Chief Constable and I were here to ‘turn the first sod’ on what was a large muddy field but in a fantastic location, looking down over Liverpool city centre and the River Mersey.

“Less than nine months on and in spite of the complications thrown up by Covid-19, this impressive structure has come to life, acting as a proud guardian over this key gateway into the city. We are now a major step closer towards the completion of a brand new, much-needed Headquarters for Merseyside Police.

“Today is an important day for the teams of designers, architects and builders who have been working so hard on this project since planning permission was first granted. It is also great news for local people, knowing that it will help breathe new life into their area.

“This new Headquarters is the visible proof of the determination that the Chief Constable and I share to provide the officers and staff of Merseyside Police with the best facilities we can afford, to help them fight crime now and into the future. 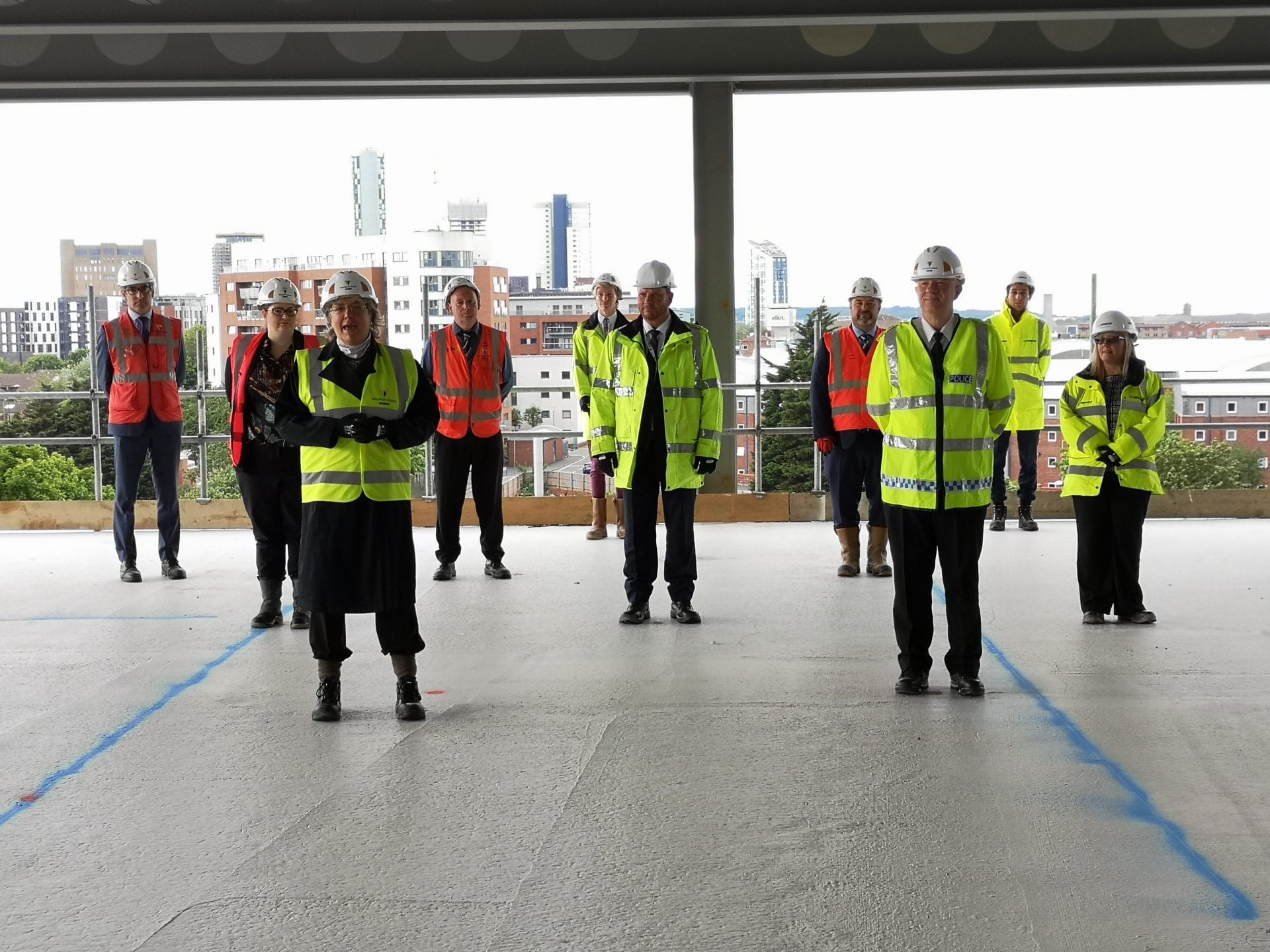 “Canning Place opened its doors in 1977 and it has been a loyal servant for the last 40 years, but sadly it is no longer fit for purpose and it is very costly to run. The force needs modern facilities and equipment which will make them more effective and efficient. This new headquarters will do just that, saving approximately £250,000 a year in running costs compared to the existing headquarters, while helping the force to continue to protect our communities for years to come.”

“It’s incredible to see how the building has progressed in the last eight months and I know officers and staff are excited about moving to the new premises in September next year.

“It is vital that we have a building that is fit for purpose, cost effective and efficient. This new HQ will help us to provide officers and staff with modern and sustainable facilities and equipment, which are vital maintaining our ability to deliver an efficient and effective service for the people of Merseyside.”

All the money saved on the running costs of the new headquarters compared to Canning Place can be directed straight into frontline policing.

The new Headquarters has been part-funded by capital specifically set aside for the Force’s buildings and part borrowed from approved sources, in accordance with the Prudential Code for capital finance. This money is completely separate from the funding used to pay for Merseyside’s Police’s officers and staff and cannot be diverted to fund operational policing.

It is also hoped that a large portion of the cost of the new Headquarters will be recouped through the sale of Canning Place, recently described as ‘the best regeneration opportunity in the entire country’.

10 ways to improve your productivity whilst working from home ?

The Police Commissioner first unveiled plans to build a new police headquarters in Everton ward in September 2016 as part of her 10-year plan to modernise Merseyside Police stations and facilities. The announcement followed a year-long evaluation of a host of potential new sites, as well as the potential refurbishment of the existing headquarters. This process confirmed a new headquarters would be cheaper to build and maintain and more sustainable, efficient and environmentally-friendly.

Planning permission was granted in October 2018, before site contractors Willmott Dixon Construction Ltd began preparing the site ready for construction to begin. Over the last few months, in line with Government advice, the site has remained open and operating in line with Public Health England guidelines and in compliance with the Site Operating Procedures issued by the Construction Leadership Council.

“We’re proud to be delivering such a landmark and important project for Merseyside Police. Ensuring the Merseyside Police headquarters are future proofed for the changing complexities of modern policing is critical and this will be a quality and cost effective environment that will serve officers, PCSOs and staff for years to come. 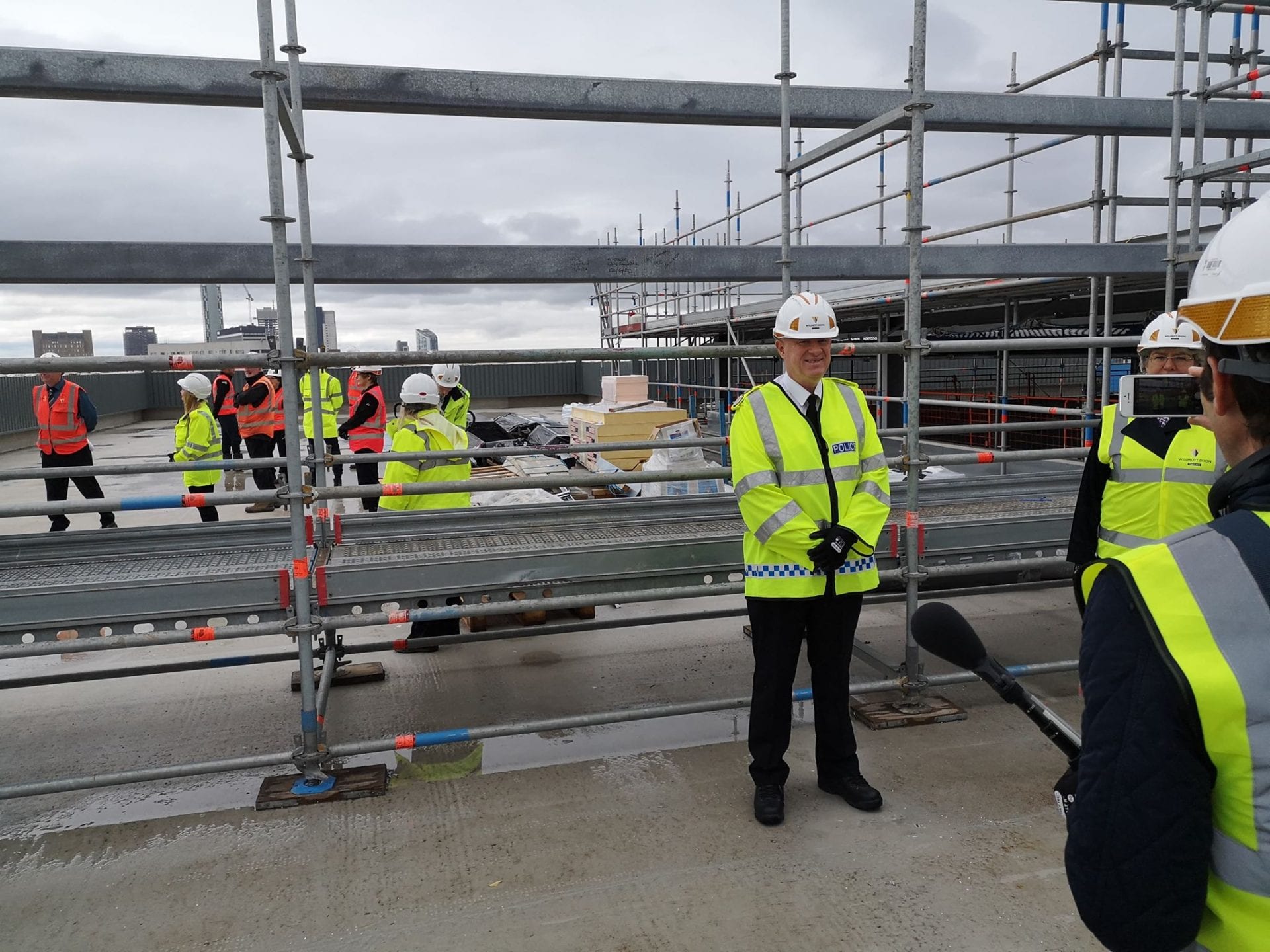 “We share a commitment to leaving a positive and lasting legacy in the communities and economies in which we work, which has seen us invest £23m of our project spend to date with local businesses based within 20 miles of the project.

“The safety of our site teams on site remains the highest priority to us and to reach this milestone in the current circumstances is testament to the strength of the relationships and collaboration between our team, the force and all our local supply chain partners. Over the last few months, the entire site team has been at the forefront of adapting to and innovating new ways of working and embracing technology to keep everyone safe and the project moving forward to completion.”