WATCH: We get set for the Birkenhead OVO Energy Tour Series - The Guide Liverpool
Contact Us Advertise with The Guide Our Video Services Follow us:

WATCH: We get set for the Birkenhead OVO Energy Tour Series 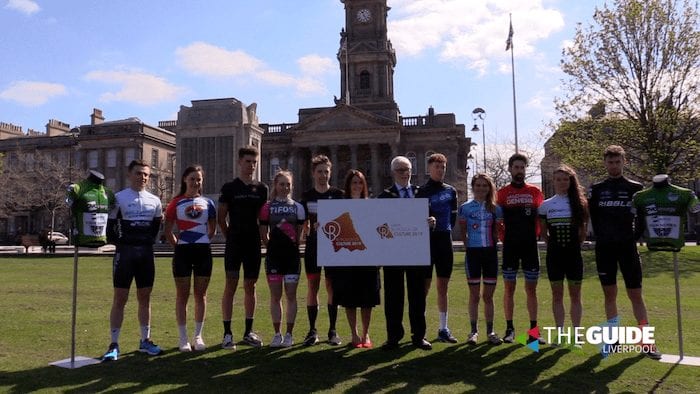 Home › Culture › WATCH: We get set for the Birkenhead OVO Energy Tour Series

Hamilton Square in Birkenhead will welcome Britain’s top men’s and women’s cycling teams this May as further details of the 2019 OVO Energy Tour Series were unveiled at Thursday’s prestigious National Launch in Wirral.

Watch above as we meet the team behind the event as they announced the news.

Held at Birkenhead Town Hall as part of the area’s celebrations as the Liverpool City Region’s Borough of Culture for 2019, the launch also saw the circuit reveal for the series’ visit to Wirral on Tuesday 21 May.

Elite riders from many of the teams who will race in the big day this May, including St Helens’ Johnny McEvoy (Madison Genesis) and recently crowned British Cycling eRacing champion Cameron Jeffers (Saint Piran), were in Birkenhead to mark one month to go until Britain’s leading televised cycle race series gets underway, and also to get their first look at the new route.

Lucy Barrow, Assistant Director for Culture & Visitor Economy at Wirral Council commented: “It’s been fantastic to welcome some of the riders to Birkenhead today and to give them the opportunity to see where they will be racing next month, including the beautiful Hamilton Square.

“We’re delighted that Wirral is hosting the Tour Series in May and a Tour of Britain stage as part of our Borough of Culture programme in 2019, giving our residents and visitors the chance to see some of the country’s top cyclists up close while showcasing the incredible scenery we have here.”

During the afternoon of event day on Tuesday 21 May local schools and amateur cyclists will have the chance to ride on the circuit before the elite women’s race at 17:30 and the elite men’s race at 19:00 rounds out the evening.

Commenting on the event, OVO Energy Tour Series Race Director Mick Bennett said: “This will be a great chance for cycling fans from across the North West of England and North Wales to see fun, fast and free procycling.

“We are excited to be bringing the OVO Energy Tour Series to Wirral as a part of the Liverpool City Region’s Borough of Culture this May and are sure that the Hamilton Square location will prove a great backdrop to the action.”

MORE: 10 restaurants you need to try on Wirral

The OVO Energy Tour Series celebrated its 10-year anniversary and 100th event in Salisbury in May 2018, but last visited Merseyside in 2010.

Road closures around the circuit will be in effect from 6am on Tuesday 21 May and will remain in place for until midnight. For more detailed information on road closures, please visit www.imaginewirral.com.

As well as being an unticketed, free-to-attend event, the OVO Energy Tour Series is unique in the world of cycling, as the focus in both the men’s and women’s competition is on the teams, who battle for the overall title based on the performance of all five of their riders in each round.

Highlights of the OVO Energy Tour Series are screened on ITV4 and broadcast around the world, while event day will provide the opportunity for a range of community and cycling activities to take place on and around the closed road circuit in Birkenhead.

MORE: Watch all of our highlights from an incredible weekend at the Randox Health Grand National 2019

The OVO Energy Tour Series gets underway in Redditch on Thursday 9 May and finishes at the historic Brooklands circuit in Surrey on Saturday 25 May.

Later on this Summer professional cycling will return to the Wirral with Britain’s biggest professional road race the OVO Energy Tour of Britain visiting on Wednesday 11 September.  More details of that event will be announced at the end of the May.

For more news about what’s on in Wirral head to our Wirral section of the site here.