We get a rare interview with legendary film music composer Hans Zimmer - The Guide Liverpool
Contact Us Advertise with The Guide Our Video Services Follow us: 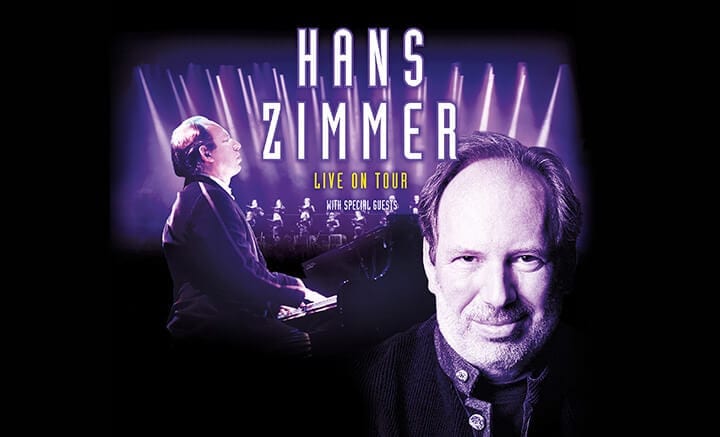 When it comes to silver screen ‘sound-scapers’, they don’t get much bigger, or more accomplished, than Hans Zimmer and our Super Fan Alex Dop caught up with him ahead of his Echo Arena gig.

Award winning film composer Hans Zimmer brings his much anticipated world tour to the Echo Arena on 17th June 2017. We caught up with him whilst he was in-between shows in Australia and after working out time differences and discussing the weather, this humble giant of the film industry gave us an insight into how things have been going during his 55-date world tour.

HZ: Every evening is different because the whole point of what I am trying to do is give my musicians as much freedom as possible, to come up with most of the time and surprise me. Sometimes there will be a bit of an accident as well, but you know, that’s fine too. It’s just slightly less dangerous than juggling with flaming kittens some nights, but that’s all good.

AD: With giving your players more freedom and doing master classes and tutorials, it seems as though you like to nurture the next generation of musicians. Is there one piece of advice, or one moral, that you have stuck by that you would like to pass on?

HZ: Yes (I like to nurture the generation), because I was young once, thank you. Obviously, I’ve been asked this a lot, but I still don’t have that advice. When everybody tells you what a terrible idea it is to become a musician and not to stick with music, you still have to do (it).

You just have to do it because we are just built like that. Everybody that I have in this band has committed their life to playing music because that is what they love. They would rather spend a life of having slightly dodgy hamburgers, but (rather) getting to play music, than a life of whatever else.

I can’t remember when I started playing music. Well I wouldn’t call it music, but I was bashing around on the piano and I just loved it. It’s a love that has stayed with me all my life and is not a job; it’s something you love.

I’ve asked a lot of people at the top of their game, “How did you get there?” And everybody has a different story. But every story involves, somewhere, the word luck and finding someone that believed in them. How can anybody be advised to be lucky? You can’t do that. But what you can say is that…oh God, I mean I wouldn’t trade it for anything else. It is a life well-lived playing music with other people.

AD: Retaining that love over a need to achieve can be a tough thing in today’s world…

HZ: Actually, I’ve got a good one for you, because you’re in Liverpool. I have a friend who went to school in Liverpool with two of The Beatles. He said that it was amazing. In music class, the teacher never realised that they had any talent at all.

He had two out of four of The Beatles in his music class and it never occurred to him that these guys were any good. So, part of it is that people don’t recognise it; people don’t get it. You just have to be persistent so that you don’t have to rely on that music teacher who doesn’t think you’re any good.

So they are my words of advice: if you are passionate about it then take it seriously, it is a short life.

AD: People can get bogged down with the industry, rather than with music itself. Did this have any effect on why you moved towards film?

HZ: Honestly, I think that the industry is crap. Part of the reason that I got in to film was because of the freedom that it offers. You didn’t have to stick with one style; you could be all over the place. If you wanted to write a long piece of music nobody was telling you cut it down for radio-play. Also, I like big speakers; cinemas have big speakers.

I’ve never had a record contract in my life. I’ve always done project after project. I suppose maybe I’ve been a little obnoxious; I don’t like being told what to do.

AD: Your set at Coachella Festival was described as, “the wildest therapy session of 2017” – (Entertainment Weekly). A lot of the audience will be coming to the show not just as music fans, but also as film fans. What can Liverpool’s audience, specifically filmgoers, expect from this intriguingly sounding show?

HZ: The main thing that you get to do is to see these musicians that have contributed to the scores over the years, especially the orchestra. I’m bringing all my players from London who have played on anything from Gladiator to The Batman movies. These are the real guys and that is really what I want the show to be about.

I’m not showing any images from the movies because I always think that there is something that happens when you don’t show the images anymore. People have memories and you just play the music purely and rely on peoples’ memories. They get to make their own little movies in their head.

I wanted to not distract from the fact that the audience can have a sort of autonomous relationship by not disturbing the eye-path between the musicians and the audience. That was what I very much loved at Coachella because it’s not just us on the stage that makes the music; it’s sort of the audience as well. We are nothing without the audience and the audience at that moment in time, truly enjoy or respond to what we’re doing.

I let my musicians show off. I want them to! I am surrounded by absolute brilliance. I am just happy that I managed to persuade everyone to come on this tour with me.

(Also) there’s a lot of staging involved. There’s a lot of lighting involved. Marc Brickman, who is my lighting designer, comes from Pink Floyd and Dave Gilmour. It’s very hard to persuade Marc to just put up one little light. There are 40 tonnes of lights hanging over my head every night and I’m just praying that the riggers have done it right!

You know, once you go, you might as well really go for it, which is how I have always done things. You’ve got to go for it!

AD: Composers seem to be having somewhat of a renaissance in the public domain in recent years, with you fresh from playing one of America’s largest contemporary music festivals, Coachella and then heading on to perform world tours. Plus, horror film veteran John Carpenter recently came to Liverpool as part of Liverpool Music Week. Do you agree and, if so, why do you think this is?

HZ: I think John Williams and John Carpenter will be doing it forever, one way or the other. But, I don’t really know.

The thing that I am just grateful about is that we turn up, we plug in, we play our music and we seem to, somehow, still make a relevant noise. I just feel eternally grateful every night that we get through the set and that people are excited about it.

I can only speak about myself and I just do my own thing, but the things that I try break a little bit or to reinvent a little bit, is just the way that people view an orchestra or the way that you can integrate an orchestra with electronics etc. (and that) you don’t have to be so precious about it.

Over the years you try to keep it interesting for the musicians, so I’m now the one struggling with parts I’ve written for other musicians who are better interpreters and better players than I. I am the one who is constantly still practising before the show.

Honestly, a bunch of my musician friends said, “you’ve got a get out of that room”.

There comes a point where you have to go and look an audience in the eye; you can’t hide behind a screen for the rest of your life. I mean, I still to this day, have crazy stage fright, but you can’t let fear stop you from doing things; so if not now, when?

I’m like the weak link. I’m asking everybody in the band how to survive this tour because they are experts, (all) the others. I’m the guy who has never left a dark room in 30 years. The career is just fine and the career can carry on as it is, but there has to come a point where you just go on an adventure.

Hans Zimmer, his orchestra and his 40 tonnes of lighting come to the Echo Arena on 17th June 2017 and it’s sure to be a momentous occasion at the city’s biggest music venue. When chatting to the man himself it is plain to see why he has had such a successful and lucrative career. He is as gracious as he is talented and after hearing his words of praise for the amazing team he has cultivated, the show has an extra layer of personality to it.

This is one for film fans, music fans and anyone who enjoys an adventure. Click here to get your tickets.

We want to know what your favourite film soundtrack of all time is? A Disney classic? A haunting thriller? Tweet us @TheGuideLpool or email us [email protected] and we’ll share the best on our socials.