Fred Lawless’ brilliant comedy A  Fistful of Collars is back at The Royal Court this summer! We met two of he cast members in the new Royal Court bar to find out what we can expect. Watch our video with Eithne Brown & Alan Stocks above. 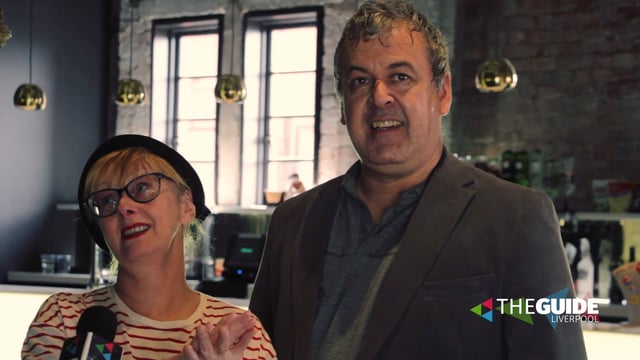 Originally produced in 2010, the crazy tale of a Wavertree Dry Cleaners was a big hit for the theatre. Fred Lawless is probably best known as the writer of the last seven smash hit Christmas shows for the Royal Court, his biggest hits including Scouse Pacific, Little Scouse On The Prairie and Pharaoh ’Cross The Mersey.

The cast includes Lindzi Germain, Angela Simms and Alan Stocks who will transfer straight over from The Royal and they are joined by more of the original cast Jake Abraham, Eithne Browne, Suzanne Collins and Lenny Wood.

The show is directed by Bob Eaton and designed by Mark Walters.

Dry cleaning is a simple business – people bring in their clothes, they get cleaned and then given back. But did you ever wonder why it takes so long?

Pressing Matters is a drycleaners with a difference. As soon as the latest little number from Cricket is brought in by a customer the bright sparks behind the counter will have it on the rack at Foxy Frocks,their exclusive dress hire shop. It’s the only cleaners in town where the clothes work harder than the staff!

There is only one problem – the girls’ landlord wants to up the rent. Well, two problems, because they’ve knocked out a policeman. Well, three because they’ve accidentally kidnapped Colleen Rooney.  And the unconscious girl with the gun in a briefcase is a bit of a worry…

Kevin Fearon, Executive Producer at Liverpool’s Royal Court tells us why he wanted to bring this one back: “I was a massive fan of this show when we first did it and I still am today. I remember the audience reaction on the night, lots of big belly laughs and standing ovations at the end. We nearly brought it back a couple of years ago but the dates that I had in mind didn’t work so it has never been far from our thoughts. Fred has given the script a re-vamp and if anything, I think that it will be even funnier this time around!”

The show contains some strong language and some partial nudity so the recommended age limit is 14+.