You can help choose the name of this new Liverpool station as new CGI's revealed - The Guide Liverpool
Contact Us Advertise with The Guide Our Video Services Follow us:

CGI images and a video fly-through showing what that the new station at the former St James site in Liverpool might look like have been revealed, as a vote opens to decide on its new name.

A shortlist of three potential names has been produced after initial discussions between the main partners on the scheme – Liverpool City Region Combined Authority, Network Rail, Merseyrail and Liverpool City Council.

To avoid any confusion with the existing James Street station in Liverpool city centre, a decision has been taken to pick a new name for the station that will reflect the modern area in which it will be located.

The three names to choose from are:

The public vote is open until 5pm on Friday 18 February and can be accessed on our Commonplace site HERE.

You can view the full CGI flythrough video via the YouTube link below (the full video can also be downloaded in the attachments section):

The artists impression CGI images and video (which show the basis of the basic design of the station but do not necessarily reflect the final finishes and fittings) bring to life the ticket office, cycle storage, escalators and platforms, showing what the station layout will be once completed.

The original St James station opened in 1874 and was named after the nearby parish church. It closed in 1917 as a cost-cutting measure during the First World War and was never re-opened.

Metro Mayor Steve Rotheram has pledged to build a station on the site, which will be located in one of the fastest growing areas of the city, near to the former Cains Brewery and Anglican Cathedral.

The area has undergone huge redevelopment in recent years, seeing it become home to a diverse range of over 350 creative and digital industries, with over 1,000 apartments built since 2012 and plans for at least 3,000 more, alongside the various popular creative and leisure facilities that have opened.

Giving commuters and leisure visitors to the area a direct connection to the Merseyrail network would support the reduction of car journeys to the area, contributing towards reducing traffic congestion, as well as aspirations to improve air quality across the city region. 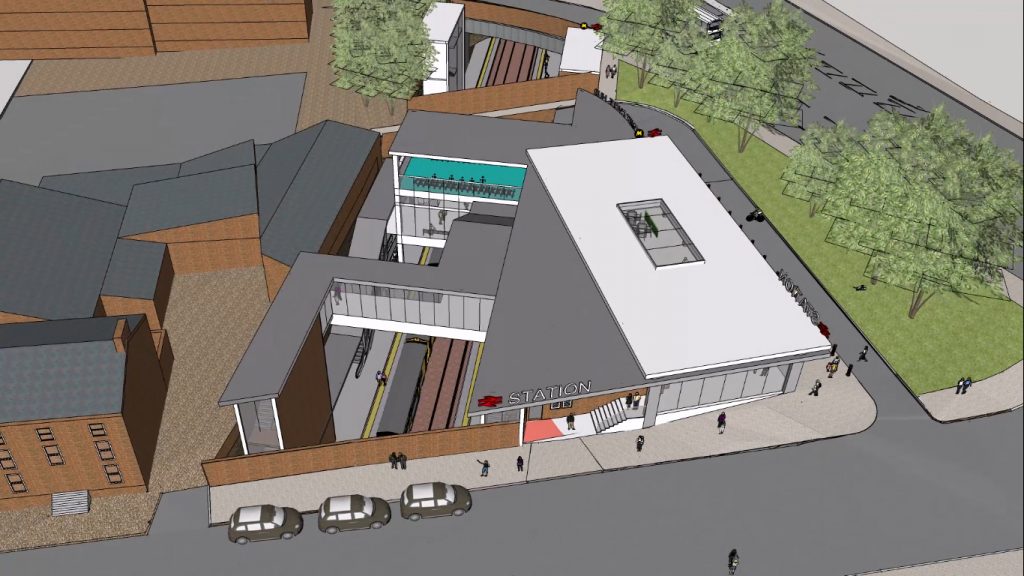 A CGI of the new St James street station.

The station would be located between Liverpool Central and Brunswick Station on the Northern Line and will include passenger toilets, a cycle hub, step-free access to and between both platforms and a passenger drop-off area outside.

The scheme will enter the next stage of design development in the new year. Land has already been purchased to safeguard the site of the new station ticket office building. The current plans aim for the station to be open in 2025, subject to funding being secured for the construction stage.

“I am ambitious about the future of public transport in our region and Liverpool’s new station – alongside another new station at Headbolt Lane in Kirkby – are only the first step towards an expanded Merseyrail for All network. I want our region to have what London has had for years – a transport system that is affordable, reliable, and easy to use.

“But I also want local people to feel a sense of ownership over our system network. Our new trains are publicly owned, as is our new fleet of hydrogen buses and we’re working to take greater public control of the wider bus network.

“As part of that, we’d love to hear your views on what we should call this new station. This area has been one of the region’s success stories in recent years, transforming itself from a left behind area into a vibrant, thriving place to live work and socialise. We think that this new station helps continue that renaissance.”

“It’s exciting to see that we’re now at the stage of looking at designs and renaming this station. It’s a symbolic but hugely significant step in the journey to bringing the station back into use.

“A huge amount of work is going on behind the scenes to ensure this redesign works not just from a transport point of view, but also how it fits into the ongoing regeneration of the area and supports existing residential communities.

“Whatever name the public chooses it’s safe to say the station will be a real game changer in more ways than one.”