10 things you may not know about Liverpool's Mathew Street - The Guide Liverpool
Contact Us Advertise with The Guide Our Video Services Follow us:

10 things you may not know about Liverpool’s Mathew Street

Mathew Street is one of the most famous streets in the entire world, popular with tourists and locals alike. It boasts a colourful history going back hundreds of years. 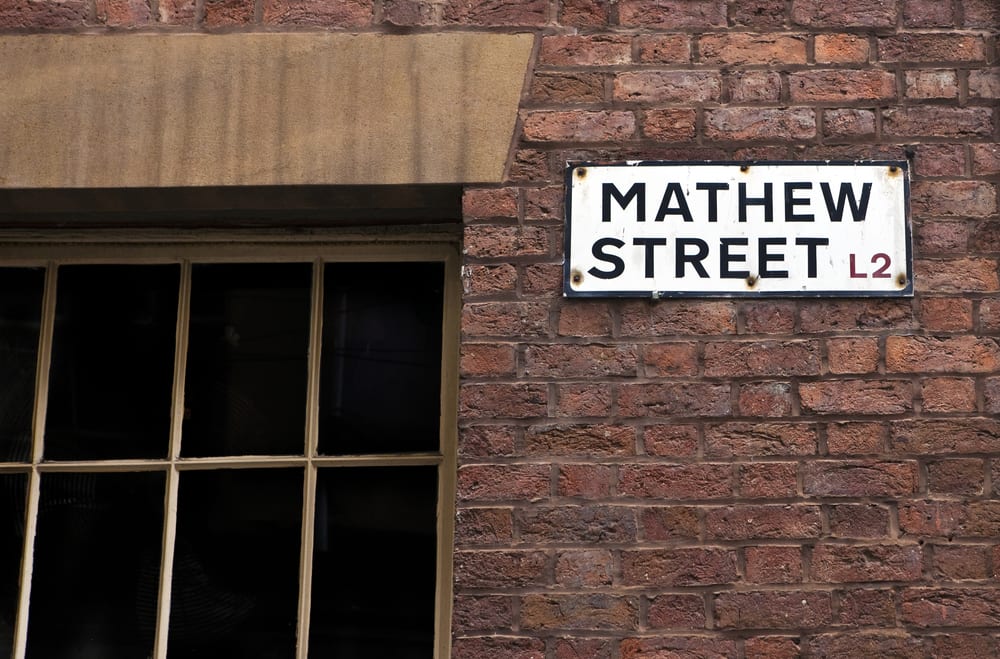 2. Nowadays the street is full of independent bars and eateries and shops but back in 1766, traders included a candle and soap seller, baker, ship carpenter, plasterer, merchant, milliner, a solicitor and more. Warehouses were built in the area for the storage of fruit and other food products that arrived on cargo ships in the Mersey estuary. 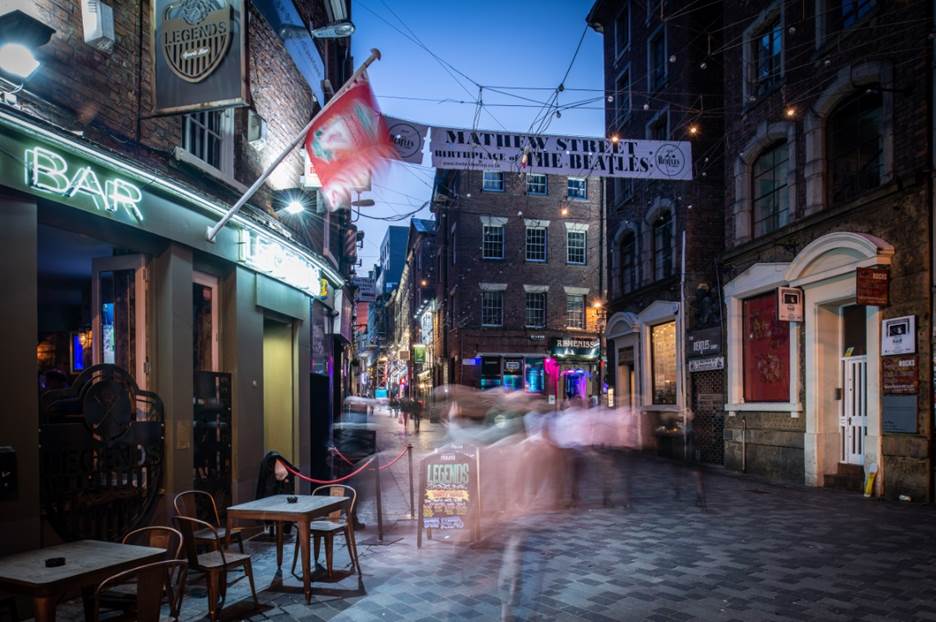 3. In 1927, Swiss psychoanalyst Carl Gustav Jung had a dream which he believed was about Liverpool despite never visiting the city. He recounted this dream in his book Memories, Dreams, Reflections. ‘Liverpool is the pool of life, it makes to live,’ he wrote. Peter Halligan an entrepreneur from Bootle read the book, and interpreted the location that Jung saw in his dream as Mathew Street. In the early 70s, Halligan converted a warehouse there into The Liverpool School of Language, Music, Dream and Pun, a space for Liverpool creatives to network over a brew. The building is now Flanagan’s Apple pub but the bust of Carl Jung on its outside wall recalls that era’s history.

4. The ‘Four Lads Who Shook the World’ mural tribute sculpture to The Beatles by Arthur Dooley originally installed in 1974 was altered after John Lennon’s death six years later. The original version had the Madonna representing Liverpool as the mother city of the band, holding three babies – John, George and Ringo – with baby-faced Paul imagined as a cherub. After John’s death the cherub was removed and another baby added to the side, under the words ‘Lennon lives’. 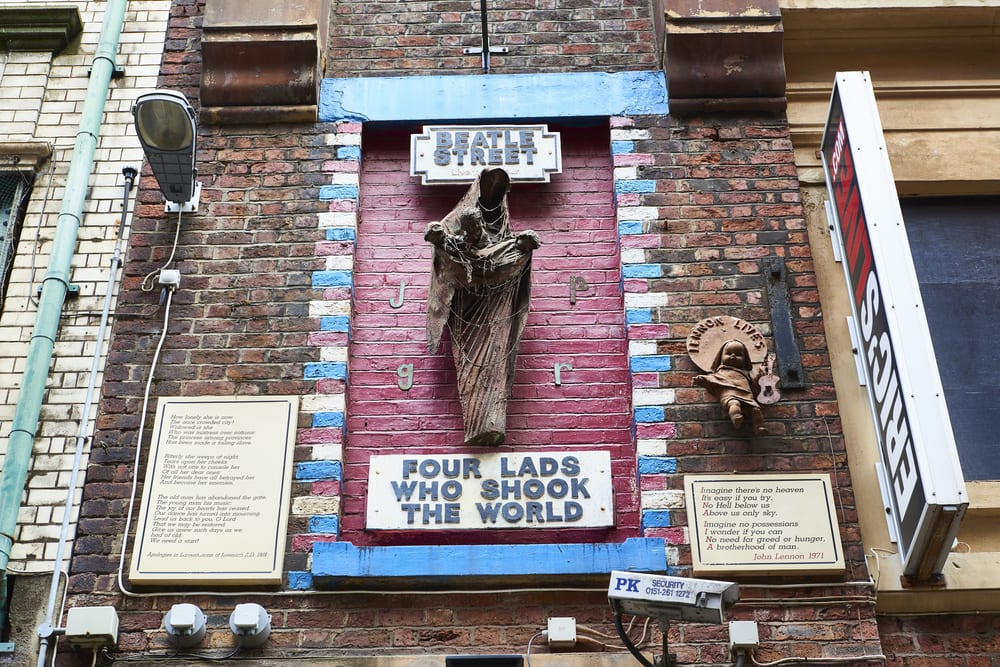 5. The life size statue of a young Cilla Black belting out a tune was unveiled in 2017 as part of the Cavern Club’s 60th anniversary celebrations.  Cilla who had died two years earlier, had worked in the club’s cloakroom before her singing career took off. The statue has her wearing a Swinging Sixties mini dress but closer inspection reveals images from the singer and tv presenter’s life featured  in squares patterned in the fabric.  Cilla stands by the entrance of the original Cavern, making the statue even more poignant.

6.  Liverpool has a great number of sculptures and statues of The Beatles both inside the city centre and outside it. The bronze John Lennon statue on Mathew Street is a necessary one to visit. He leans against the wall outside the Cavern pub, surveying all before him. Created by David Webster in 1996, it was modelled on The Beatles’ pre-mop top days in Hamburg. When the original head was vandalized, it was replaced with a more recognizable version of John, again made by Webster.

12 bands that shook the world during the Merseybeat era

MORE - 10 things you might not know about George Harrison

7. The legendary punk and post punk club Eric’s was a venue that launched so many legendary Liverpool bands including Echo & The Bunnymen and Teardrop Explodes but also hosted many touring acts as well, like The Sex Pistols and The Clash. As well as conventional night time gigs there were matinee shows for younger music fans, so no one missed out. It seems odd that Eric’s was actually only open for four years, seeing as it’s such a big part of Liverpool music history. Eric’s Live opened in the same location in 2011 but although it offers music and comedy most nights, is not related to the original.

8. The Cavern Club of course is synonymous with The Beatles and Merseybeat in the 1960s but it still plays host to many contemporary bands from all over the world, as well as local acts. A few years ago, Adele did an intimate show in the Live Lounge playing songs from her albums 19 and 21 followed by an audience Q&A. In November 2020 NME and Q Award winning band The Cribs launched their album Night Network with a streamed gig from the club. The Wakefield band hadn’t played live anywhere for two years.

9. In 2006, a man in Dallas over in the United States foiled a burglary of Black’s outdoor activity shop on Mathew St. He was checking out our legendary street via webcam from his home and spied three men breaking into the shop. The man then contacted Merseyside Police who went to the scene and arrested the suspects on suspicion of burglary. 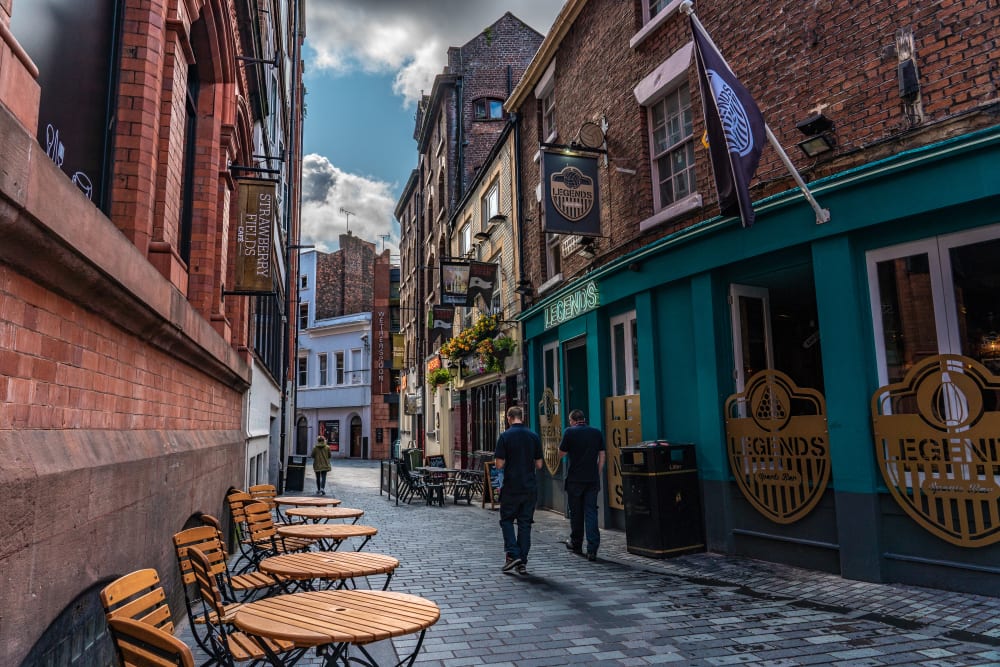 10.  The annual Liverpool Mathew Street Festival, a free two day event each August bank holiday, started in 1992 and each year drew in over 300, 000 people to the city centre. The festival which featured tribute and local acts, many performing covers, became unmanageable so was renamed Liverpool International Music Festival in 2012 and is now held in Sefton Park. Now a paid-for ticketed event, it leans towards contemporary pop, mainstream and chart music, whilst running schemes and providing support for young local Liverpool music makers and DJs.