15 Things you didn't know about Liverpool Town Hall - The Guide Liverpool
Contact Us Advertise with The Guide Our Video Services Follow us: 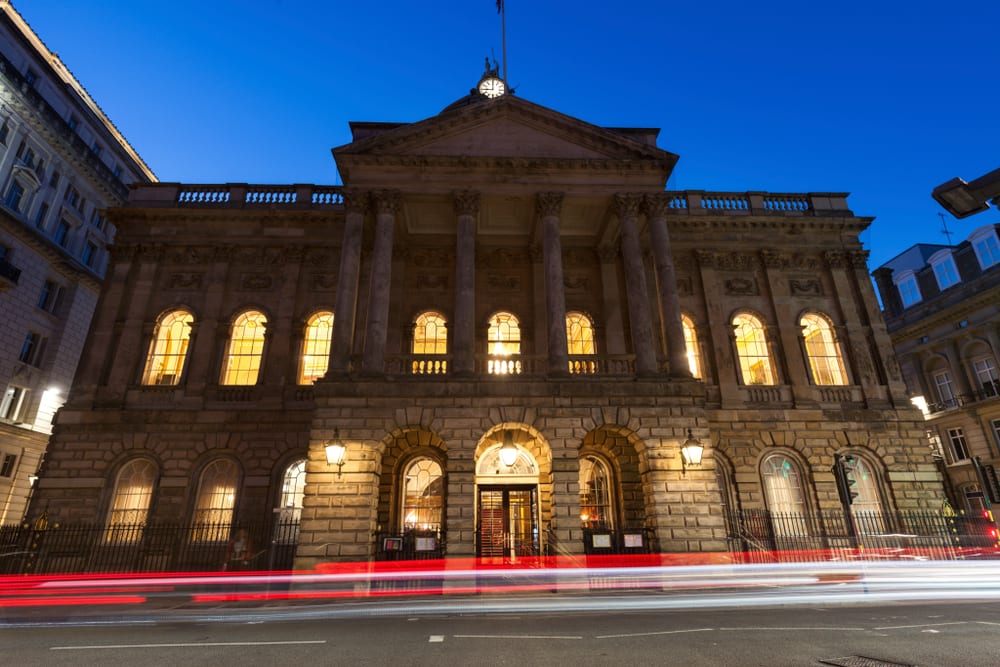 The original Liverpool Town Hall was completed in 1754 and sits on the same site as two previous Town Hall buildings, equating to 500 years worth of history. (The original one was erected at the nearby Royal Bank of Scotland…and it had a thatched roof!)

There’s a nod to our city’s rich history on every wall, and floor within Liverpool Town Hall. From the coat of arms on the stunning Minton tiled floor. Look up the staircase to the spectacular domed ceiling and walls which feature scenes of Liverpool’s free port creation by King John and the city as a centre for education, culture and commerce.

Keep your eyes peeled and see if you can spot the lions, unicorns, golden pineapples, Liver Birds, clocks and more, on your next visit. 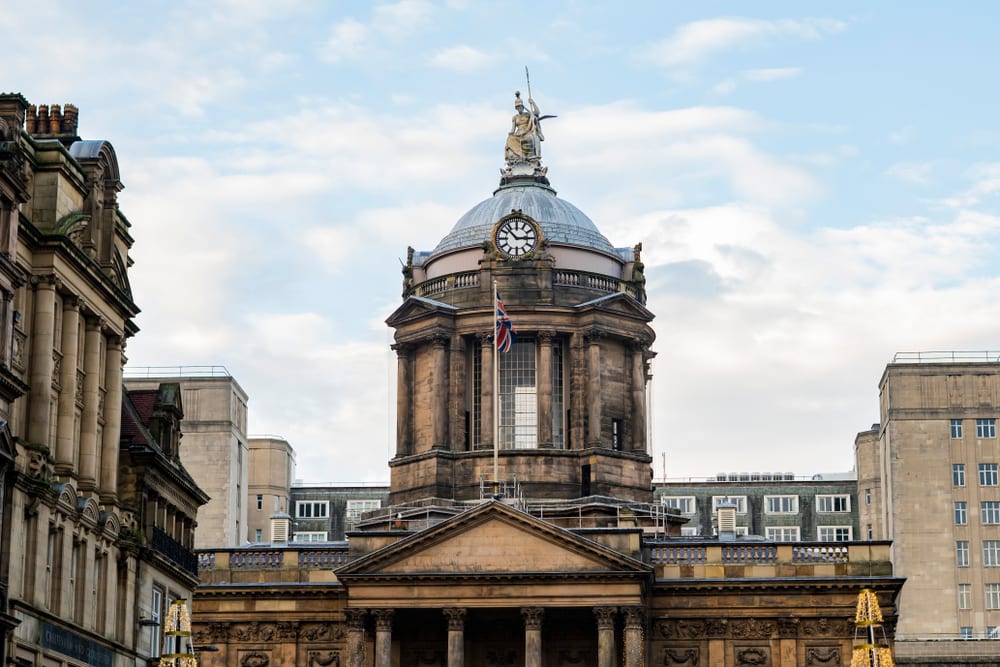 Liverpool Town Hall regularly throws open its doors to the public and is a host venue for Heritage Open Days, Light Night and of course, Remembrance. The friendly, knowledgeable Town Hall staff do a sterling job of ensuring every visitor gets a first class tour and learns something new during their visit. They’re also ace at taking the best pics on the balcony and sweeping staircase and of course featured heavily in the backdrop to our visit from Liverpool Giants.

The Dome, which its above the staircase and at the centre of Liverpool Town Hall is breath-taking. During an early 90’s restoration, decorators discovered a cannister filled with bits and bobs from the previous revamp. They added to it, and put it back before completing the work. We’re dying to know what’s inside and who will uncover it next! 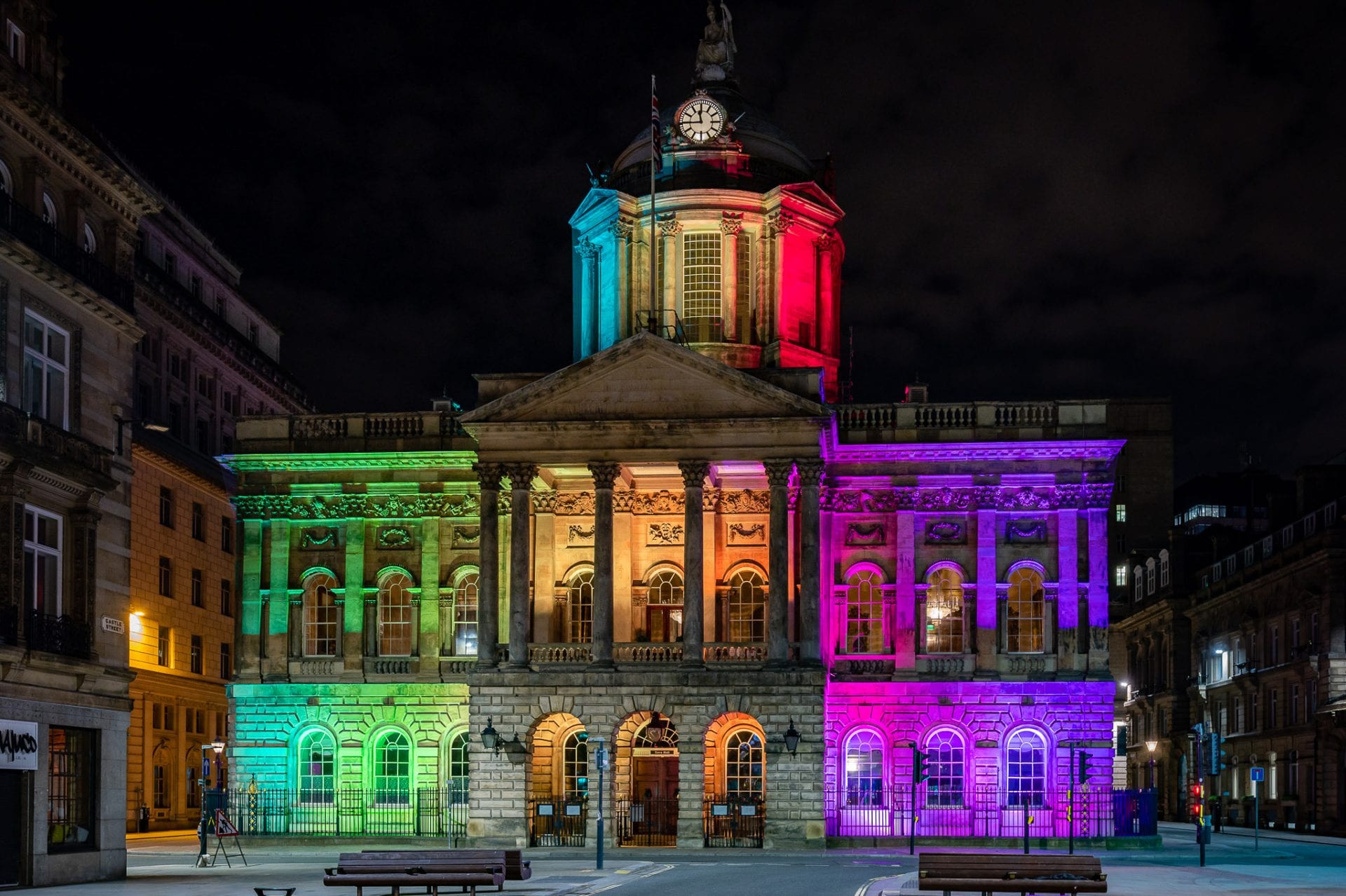 Did you know that the statue that crowns Liverpool Town Hall is called Minerva? The Roman Goddess of Wisdom and Protector of Cities has watched over the city from the Town Hall roof since 1799 and even survived the Blitz.

6 – Friendly Ghosts of Times Gone By

Liverpool Town Hall staff have reported sightings of a few friendly faces over the years. There’s a lady who walks the staircase in full Victorian dress and man, complete with mutton-chops (sideys to you and me) who wanders the basements kitchen corridors too. 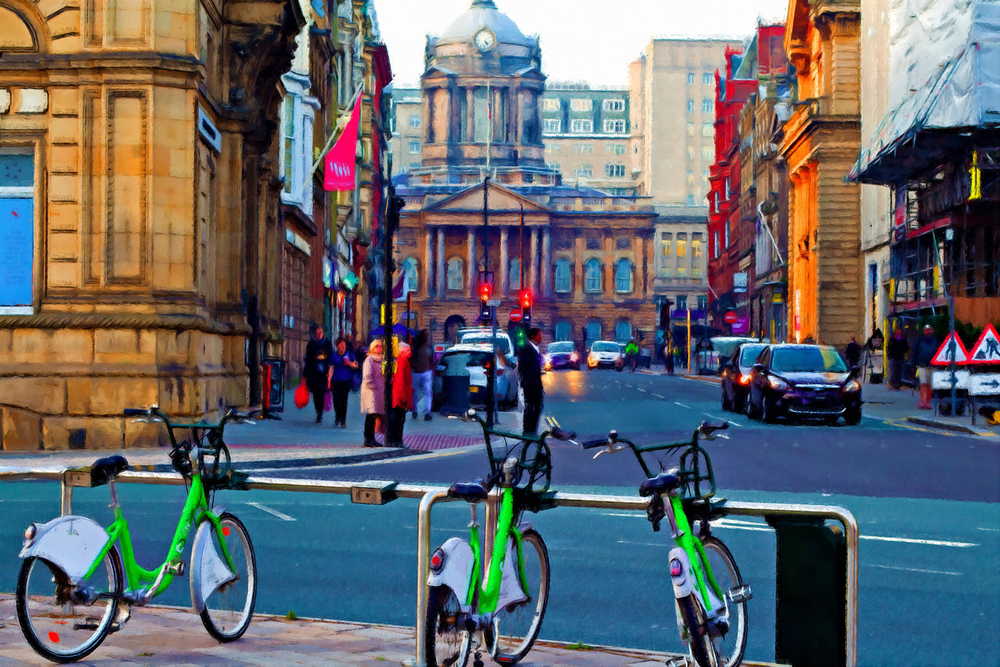 7 – A Georgian Hall fit for a Queen…or two

In 1851 Queen Victoria stood on the balcony of the Town Hall, to greet the merchants in Exchange Flags. Queen Elizabeth and the Duke of Edinburgh followed in her footsteps in June 2016 on a visit to the city to officially open the new Alder Hey Children’s hospital.

8 – Freedom of the City Awards

For those fortunate enough to visit Liverpool Town Hall, rest assured you’re joining a very special guest list. Alongside royalty, the likes of The Beatles, Bob Paisley, Nelson Mandela, Bessie Braddock, Sir Ken Dodd, Roy Castle, Gerry Marsden and many more have been granted Freedom of the City and their names adorn the walls of Liverpool Town Hall with the upmost pride.

Did you know – So enamoured by Liverpool Town Hall staircase, engineers Harland & Wolfe made a replica for their most famous ship, The Titanic! 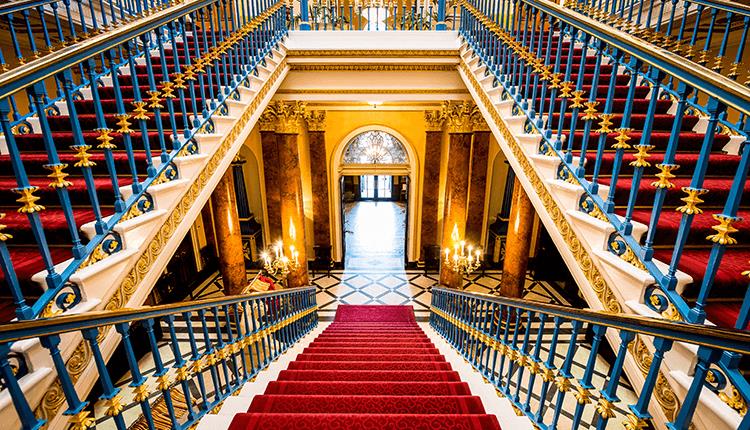 Thousands upon thousands of staff, visitors and guests have walked the stunning town hall staircase, but very few know that the original gas line, that was used to light the gas lamps along the stairs, actually remains inside the bannister! We doubt there’s any genie’s around now.

Liverpool Town Hall sustained bomb damage during the second world war, including cracks in the marble pillars in the main ballroom. As money was needed for essentials immediately after the war, one pillar was replaced with wood and painted to match the others. Can you tell which one it is? 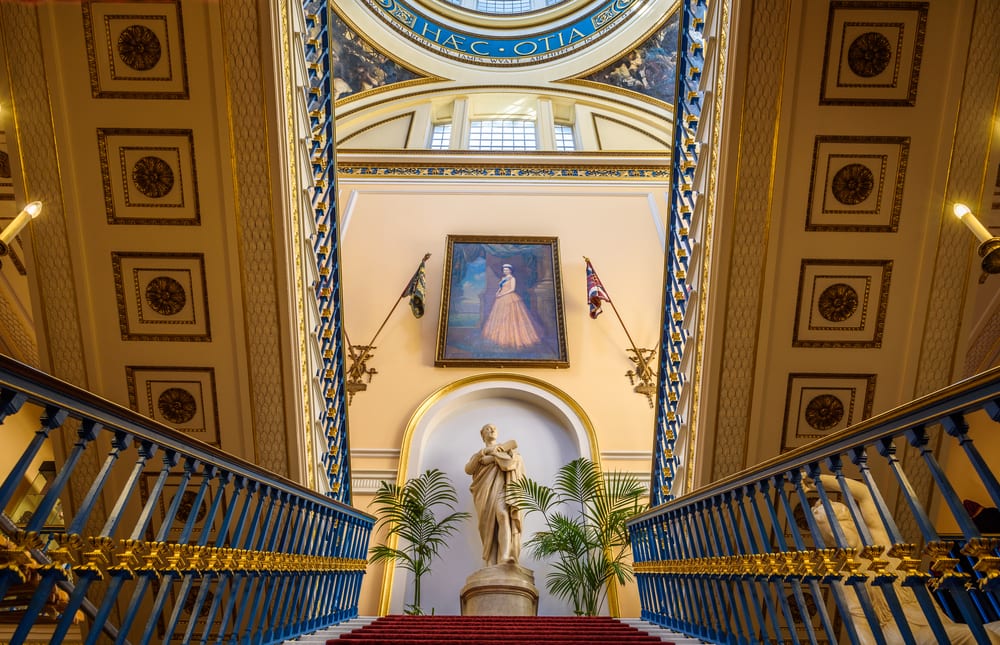 The magnificent main ballroom, on the second floor really does have the wow factor. Hanging from the ceiling you’ll see three incredible Georgian chandeliers, each one measures 28 feet in length and contains 20,000 pieces of cut glass crystal. They also weigh over a ton a piece.

Liverpool Town Hall is a real community hub which celebrates the achievements of Liverpool people with gusto. From school attendance awards to civic meetings, afternoon tea with The Lord Mayor, Freedom of the City ceremonies, weddings, private functions and more. The Town Hall becomes a focal point for the city , not just in during good times but in bad too, giving us some where to grieve and pay our respects, as you’ll see above. 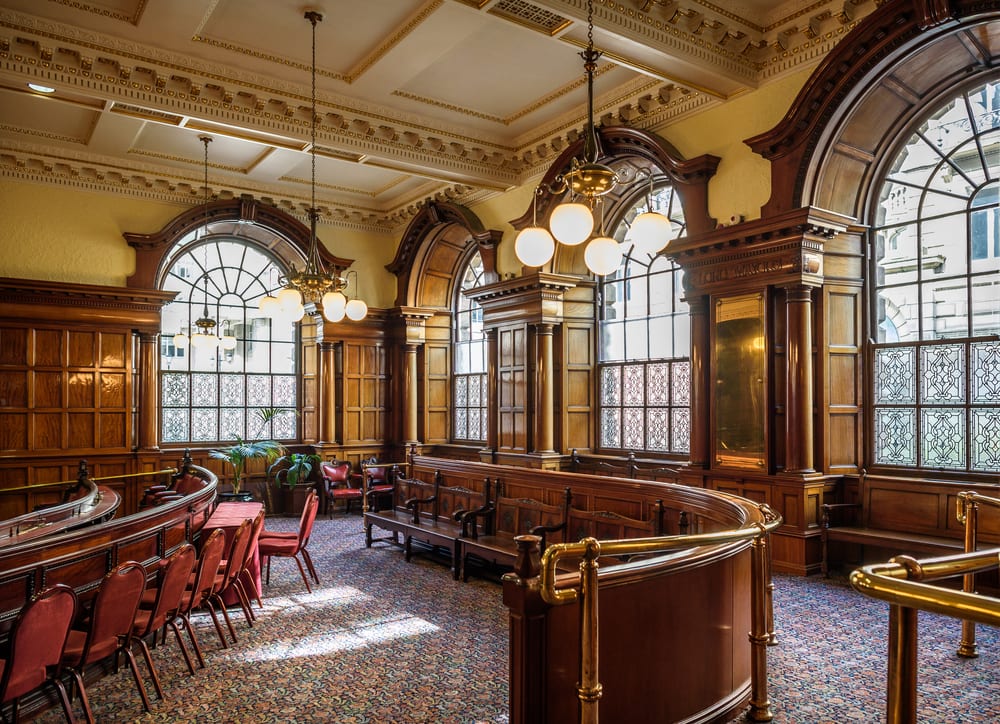 Speaking of civic meetings! Liverpool Town Hall houses the impressive Council Chamber, which hosts Liverpool City Council meetings. The beautiful mahogany panelled room can accommodate 220 guests and can be hired out for civil wedding ceremonies. Just imagine you wedding pics in such a beautiful setting!

Hidden from view and seen only by those granted special access to Liverpool Town Hall roof, there’s a piece of 19th century graffiti that has stood the test of time! ‘Williams August 15th 1898’ is carved into a piece of sandstone and looks as fresh today as it wouldn’t done back then.

Liverpool Town Hall has a permanent Hall of Remembrance which lists the names of almost 14,000 Liverpool men who died during the first world war. To mark the centenary of the end of the Great War, The Guide Liverpool created a video of a scrolling list of the names of the fallen which was projected from Liverpool Town Hall on to Exchange Flags and the Nelson Monument on the lead up to 11th November 2018.

To book your place for Story Time with Santa from 1st December 2018, head to www.liverpooltownhall.co.uk/events or click here. To view the 2018/19 wedding brochure or to book a viewing click here.

Have you attended a ball, ceremony, Santa meet and greet or wedding at Liverpool Town Hall? We want to see your pics and memories. Drop us a line on Twitter, Facebook or Instagram and we’ll share the best on our socials.