5,500 runners will celebrate 25th anniversary marathon milestone this Sunday - The Guide Liverpool
Contact Us Advertise with The Guide Our Video Services Follow us: 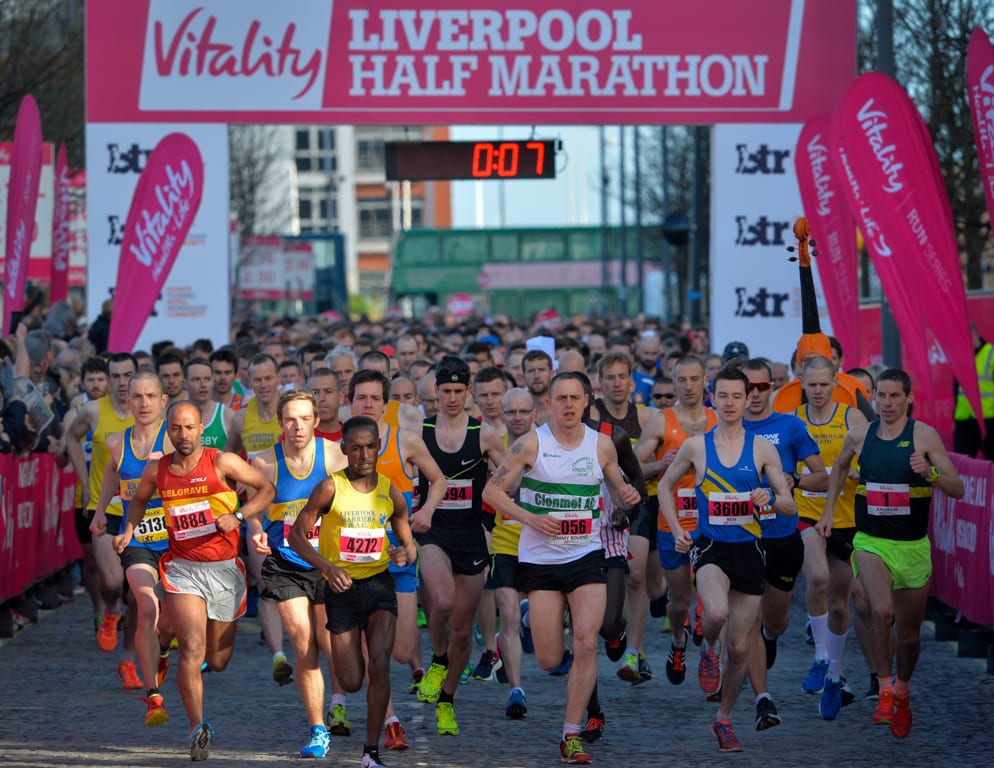 The 25th silver anniversary race of the BTR Liverpool Half Marathon takes place this Sunday (25 March), when 5,500 runners take part in the milestone event.

As well as the 13.1-mile half marathon, the event also includes the third annual BTR 10 Mile Road Race. The official start time is 9am for both distances.

Both races start and finish under the gaze of the Liver Birds at Pier Head Liverpool, an iconic backdrop to showcase the city set against the Three Graces – the Royal Liver Building, Cunard Building, and Port Of Liverpool Building. The course features some of Liverpool’s most famous sights including Liverpool Anglican Cathedral, Princes Park, Sefton Park, Otterspool Promenade, Albert Dock Liverpool, and Museum Of Liverpool.

Runners then cross the finish line at the waterfront, where they will collect their bespoke commemorative finishers’ medal and T-shirt, specially designed to mark 25 years of the race from 1994 to 2018. 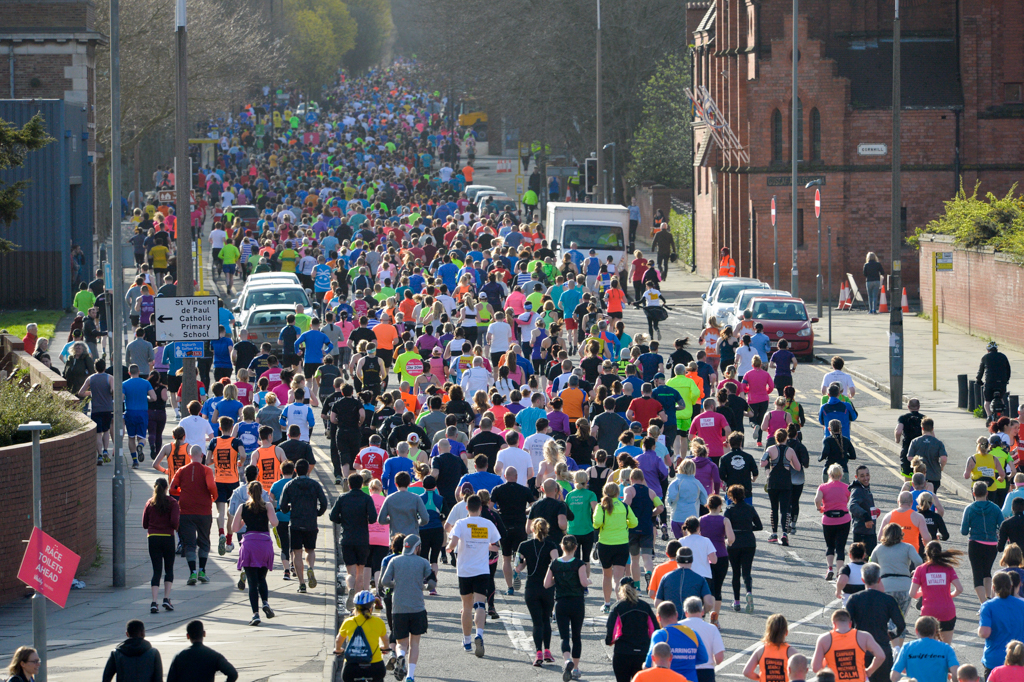 Originally known as the Liverpool International Half Marathon, the event has been staged across a number of courses since 1994. It has survived three buy outs, and was even taken over by the London Marathon Company for a short period.

BTR was delighted to bring the race back into the heart of the city from its Sefton Park home to start and finish at Kings Dock. And since 2013, BTR has been proud to boast a grandstand start and finish area on the city’s iconic waterfront at Pier Head Liverpool – part of the UNESCO World Heritage Site.

During its 25-year existence, the event has firmly established itself as the North West’s premier road race event.

The race will be officially started by Bill Sergeant, Jim Ross and Ronnie Hart – the trio behind the original Liverpool International Half Marathon in 1994.

They will be joined by Wigan-born double World Championship medallist Jenny Meadows, one of Britain’s leading female athletes.

Jenny has represented Great Britain since 2000, including being part of the Olympic team in Beijing in 2008. In 2010, Jenny broke Dame Kelly Holmes’ British indoor record and is still the current record holder. Jenny retired from the sport in 2016 after a long and successful career.

Last year’s event saw four new course records set by the first place male and female in both the half marathon and 10-miler – and this year’s two races are again set to be hotly contested by an impressive field of runners. 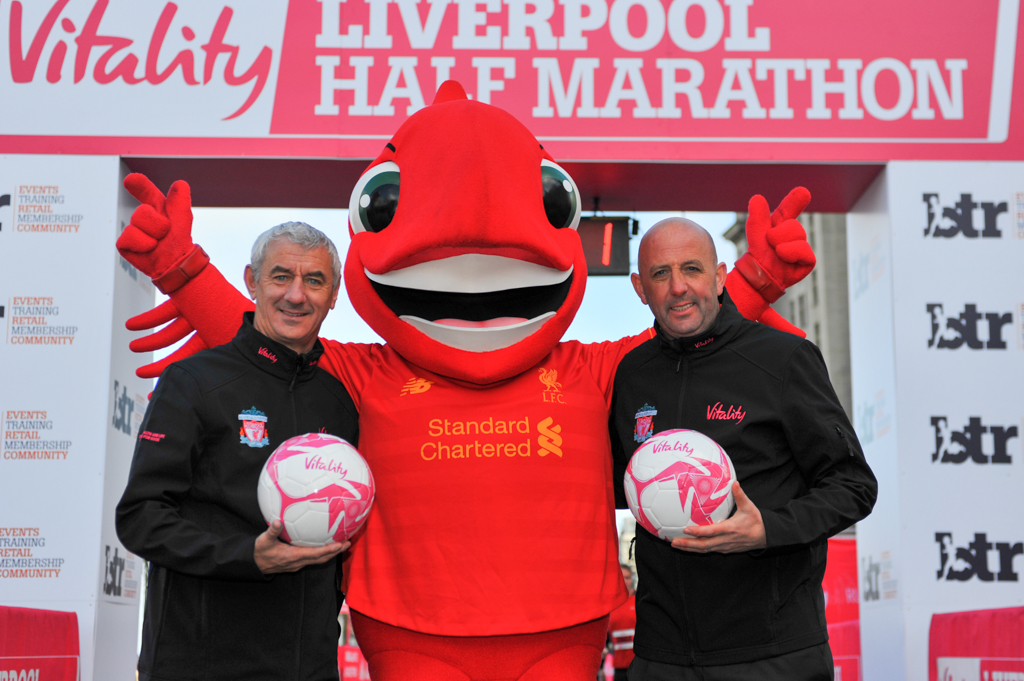 “The 25th anniversary Liverpool Half Marathon is quite a milestone. In recent years, the running market has massively grown and competition is fierce – so it’s testament to the event and its fantastic history that it’s stood the test of time.

“We are honoured to welcome Bill Sergeant, Jim Ross and Ronnie Hart to officially start the race. They had the foresight to create the event in 1994 and their vision has meant that in the region of 100,000 runners have taken part over 25 years – that’s no mean feat. BTR Liverpool is very proud and privileged to now carry the mantle, showcasing the city through running to visitors from home and overseas.

“This year we have introduced a special personal best medal to mark the silver anniversary. It’s proved extremely popular and we have 500 runners taking on a challenge of their own as they hope to set a new half marathon PB.

“Claire House Children’s Hospice is the official event charity so I’d urge runners to dig deep and make a donation. I’d also encourage the public to come out on Sunday and cheer on the runners, that support really does make a huge difference in spurring them on to the finish line.”

Participants are travelling from across the globe to specifically to take part from destinations including Canada, Dubai, France, Germany, Ireland, Isle of Man, Italy, Norway, Qatar, Poland, Spain, Switzerland, and the United States of America.

A team of 22 from Malta are gearing up to run, as well as a team of 15 from Denmark who have even had special running kit designed and produced to make it an extra special occasion.

Also lining up on the start line is 52-year-old Stephen Symons, who is thought to be the only ever present runner who has taken part in every Liverpool Half Marathon – making this Stephen’s 25th consecutive race start. Despite suffering from a brain haemorrhage in November 2012, Stephen still managed his continuous race run in March 2013 and took part accompanied by family.

A team of 35 from the Everton Football Club Academy will take on the half marathon to raise funds for official club charity, Everton in the Community, which is celebrating its 30th anniversary throughout 2018.

Former Royal Marine Commando Andy Grant won Gold Medals at the Invictus Games 2014. He runs wearing a blade. Andy will be running the half marathon.

Claire House Children’s Hospice is the official event charity of the BTR Liverpool Half Marathon 2018 – and runners are asked to show their support. A group of 30 runners are taking part to raise much-needed funds for the charity.

When Claire House Children’s Hospice opened in Bebington in December 1998, just 10 families were being cared for. Now more than 400 families are supported. In January 2018, Claire House Liverpool opened its doors in West Derby offering daycare services including counselling and complementary therapies.

“Claire House is delighted to be the official charity partner for the 25th anniversary BTR Liverpool Half Marathon. Last year 322 children spent time at Claire House, making incredible memories with the team and their families. However, for every child we are currently reaching sadly there is another child we are not supporting. BTR runners supporting our children’s hospice will be helping us to reach more families than ever before.”

You can support Claire House by making a donation by visiting www.justgiving.com/campaigns/charity/clairehouse/liverpoolhalf2018 and get even more info on the website here www.btrliverpool.com