After a stroke at 10 Joey the Legend is making giant strides for himself and Alder Hey - The Guide Liverpool
Contact Us Advertise with The Guide Our Video Services Follow us:

When Joey Devine takes his first strides for Alder Hey’s Oli Safari Walk in May it will be with a mixture of pride and determination.

Pride because of what he is achieving, completing the course and raising much-needed funds for the special children’s hospital.

And determination, because every small step signals a milestone for the St Helens teenager who, three years ago, was left unable to walk – or talk – after suffering a massive stroke.

“It’s that enormous sense of achievement,” says mum Karen. “We thought he might never walk again, we thought at one point he wouldn’t survive, so to see him doing something like the walk is amazing, he’s incredible.

“I know every mum says her child is special but Joey is unique, he has always been known as ‘the kind boy’ and that hasn’t changed in spite of everything he’s been through.

“He wants, as we do, to give back to the people who have given so much to us.”

Known as ‘Joey the Legend’ because of his inspirational courage and constant smile, it’s 13-year-old Joey’s second Oli Safari Walk – he took part first in 2020 – and the VIP fundraiser is encouraging others to join him on the 3km trek around Knowsley Safari’s grounds on Sunday, May 15.

As Karen says: “You don’t have to raise a lot, but the more people who take part and donate money to Alder Hey, the more they will get to continue the work they do to support boys like Joey on the road to recovery.

“Joey will be really excited about doing it and he’ll be geeing everybody along,” smiles Karen. “And I’ll be crying because of the emotion of it all.” 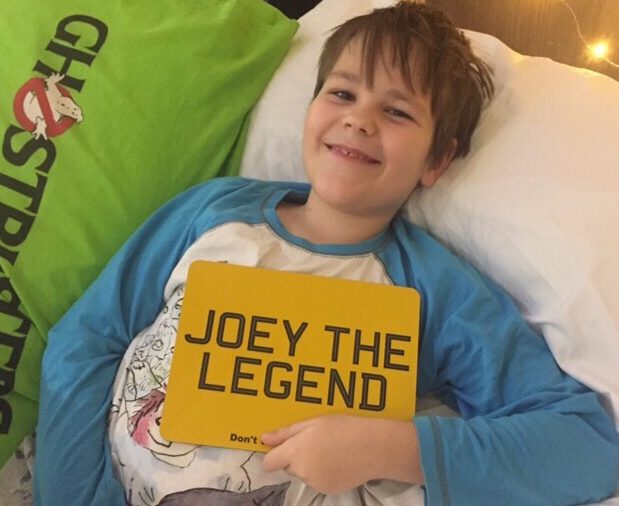 It was in November 2018 that life changed dramatically, and within minutes, for Joey and his family, mum Karen, a 44-year-old midwife at Whiston Hospital, dad Nick, 40, a tattoo artist, and his brother Ethan, 19.

Karen had just dropped Joey off at Queen’s Park Primary School and was still there helping get things ready for its Christmas Fayre, when the Head raced to tell her something was wrong.

“It was a Friday morning and five minutes before it happened, Joey was fine, his usual self. He had gone into his classroom and told the little girl next to him that his tongue was tingling, and he went to get a drink of water,” she says.

“The teaching assistant says he made a yelp, like a puppy, and he lost his speech straight away. He went back to his desk to write down what was wrong because he couldn’t speak, and he couldn’t grab the pen to hold it. 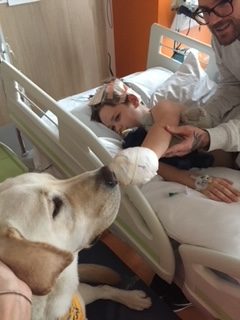 “He walked out of the classroom and, within five minutes, the total right side was completely gone, paralysed.”

Joey lost consciousness on the way to Whiston Hospital – he had to be resuscitated en-route – and was then transferred to Alder Hey, where it was discovered he had suffered a brain haemorrhage due to an arteriovenous malformation (AVM).

“The AVM is like a tangle of vessels which haven’t formed properly. Blood gets in but has no way out, so pressure builds up and then they burst. We have been in touch with families who have lost children to this so we know we are really lucky that Joey’s still here. 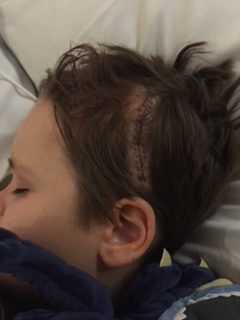 “We were warned that he might not make it through the operation. I think as me and Nick sat there, we planned the funeral he might have, the coffin he would have…it was the worst few days of our lives.”

Joey was placed in an induced coma for three days and when he woke up he was unable to move or speak.

He has suffered brain damage.

“But when he opened his eyes we could see that ‘he’ was still there. He saw his teddy bear, Dylan, that his brother had bought him when I was pregnant, and there was a sparkle in his eyes, so we knew we hadn’t lost ‘him’ and that was a massive blessing.”

Joey started the therapies that would help him as he strives to recover and get back as much as he can: speech therapy, music therapy, physiotherapy and hydrotherapy. He engaged with everybody, and embraced rehab and everything that was being done for him to ensure he would regain as much as possible. 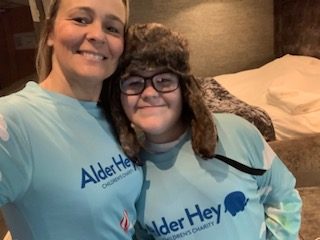 Joey can now talk and walk with a limp, but only for short periods and he uses a wheelchair. His right arm still has limited movement and he tires easily. But that doesn’t deter him.

Karen says Joey, who’s now a pupil at Cowley High School, has never cried or complained about what’s happened to him: “He only once said he wished the stroke had affected his other side so he could still draw, but he’s learned now how to use his other hand.

“Before he could actually talk again he had a laminated keyboard and would spell things out for us if we didn’t know what he was saying. One day we were talking about how he will get better and he started to type ‘D..E..T..E..R..M..’. We couldn’t believe it and interrupted him (which he hated) because we were so overjoyed he was determined to get better!” 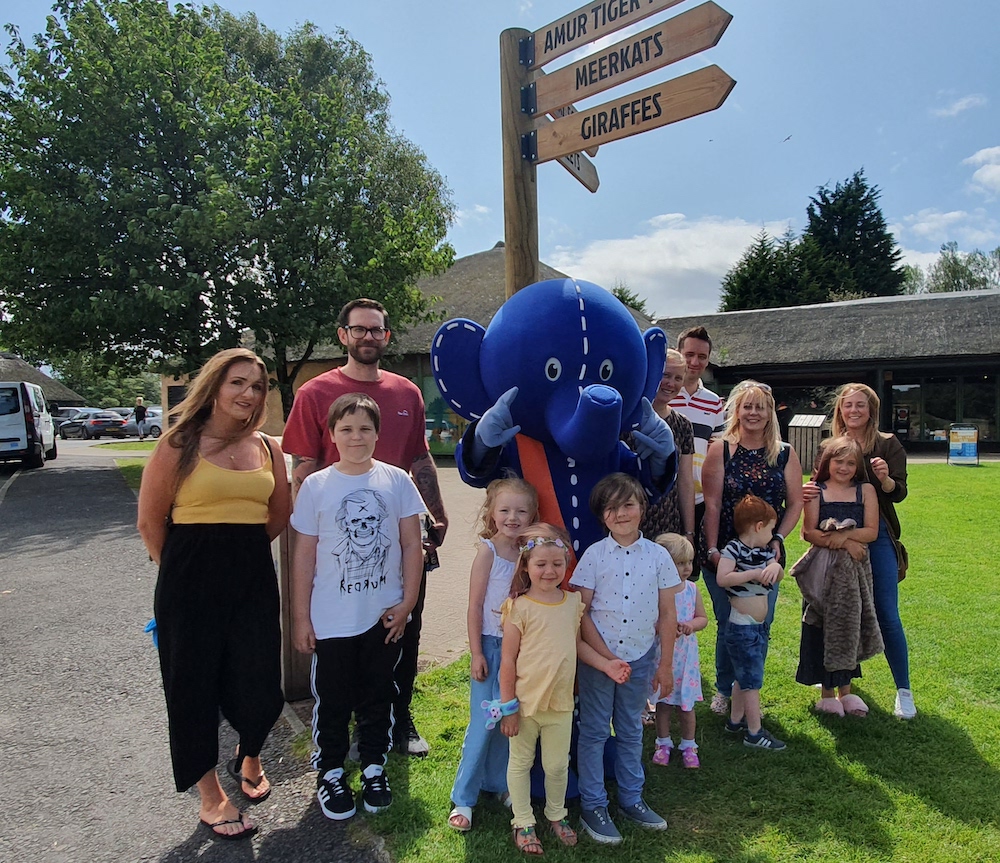 The Oli Safari Walk at Knowsley

Joey and his family have now raised almost £12,000 for Alder Hey Children’s Charity and the Children’s Trust to give back to all those who have helped them.

“Joey is a giving child and he loves doing it,” says Karen. “We look at old videos and photos of when it had first happened and see how far he has come. It has been hard work, at times soul-destroying, but we have come so far – Joey has come so far.

Joined by Joey, Oli will be taking on his next 3km Safari Walk on Sunday, May 15, and to take part all you need to do is buy event tickets to Oli’s Safari Walk on the Alder Hey Charity website – family pass (two adults, two children) pre-booked costs £30; adults, £15, and children, £7.50 – with all the proceeds from sales going to Alder Hey.

Alder Hey asks that you also try and raise as much as possible for them by collecting sponsorships from family and friends.

The walk starts at 10am – gates open at 9am – and you will have full access to the park after the event!

Helen Hughes, community & fundraising manager for Alder Hey Children’s Charity, says: “The Oli Safari Walk has become a bit of an iconic event in the regional calendar – over a thousand people took part last year, despite the rescheduling changes during another difficult year.

“This year’s event is going to be the biggest and best yet, when families and friends can finally come together to enjoy a unique environment at the Safari Park, taking part in the fun 3k walk, catching up and most of all having a laugh, as well as helping to raise really vital funds for Alder Hey.

“Every ticket purchased also entitles people to enjoy the full Safari Park experience after the walk for the rest of the day – so it’s a perfect day out and a total win/win for everyone!”