Atomic Kitten reunite to rerecord fans Southgate version of Whole Again ahead of England's semi final - The Guide Liverpool
Contact Us Advertise with The Guide Our Video Services Follow us:

Atomic Kitten have rerecorded the fan favourite version of their hit Whole Again ahead of England’s big Euros semi-final match.

The song has become a massive crowd anthem, with the original lyrics replaced as a tribute to Three Lions boss Gareth Southgate.

Now, with the team about to face their biggest challenge against Denmark on Wednesday night, the band has got together in the studio to make it official.

Liz McClarnon and Natasha Hamilton have recorded their parts in the Wirral, and Jenny Frost joined them virtually from a studio in Ibiza where she now lives.

OMD’s Andy McCluskey, who wrote Whole Again back in 2001, has also given his blessing to the new footy take on the original.

Liz says they’re hoping the track can bring the team good luck and that England fans have something to sing about heading into Sunday’s final.

You can stream or download the newly recorded version of the track here.

Although she admits it’s been surreal hearing thousands chanting it on the terraces and in bars up and down the country.

“You can hear it so clearly when you’re watching the match on TV and everybody’s referencing it all the time, calling it the Southgate ballad, it’s been very strange,” she says.

“It first happened three years ago for the World Cup and it just snowballed, then obviously we went out at the semi-finals and we thought that was that.

“But with the Euros it’s started up again and people were telling us we should record it. At first we said no, then we got offered this gig at a party in Boxpark in Croydon where everyone was watching the match.

“That was where we decided for the first time ever that we’d sing the Southgate lyrics and the crowd just went nuts. The noise was so loud you could only just about hear us singing, everyone was filming it and the video went everywhere.

“We couldn’t believe the reaction, we only realised afterwards what a massive deal it was.”

Liz says since then her phone hasn’t stopped ringing, and it was then that her friend Scotty who was the Kittens’ marketing manager suggested the new version really needed to happen.

“He said, ‘I think you should record this because everyone’s going mad for it’,” says Liz. “We thought it was a great idea, then a big record company came in and it’s all gone from there.” 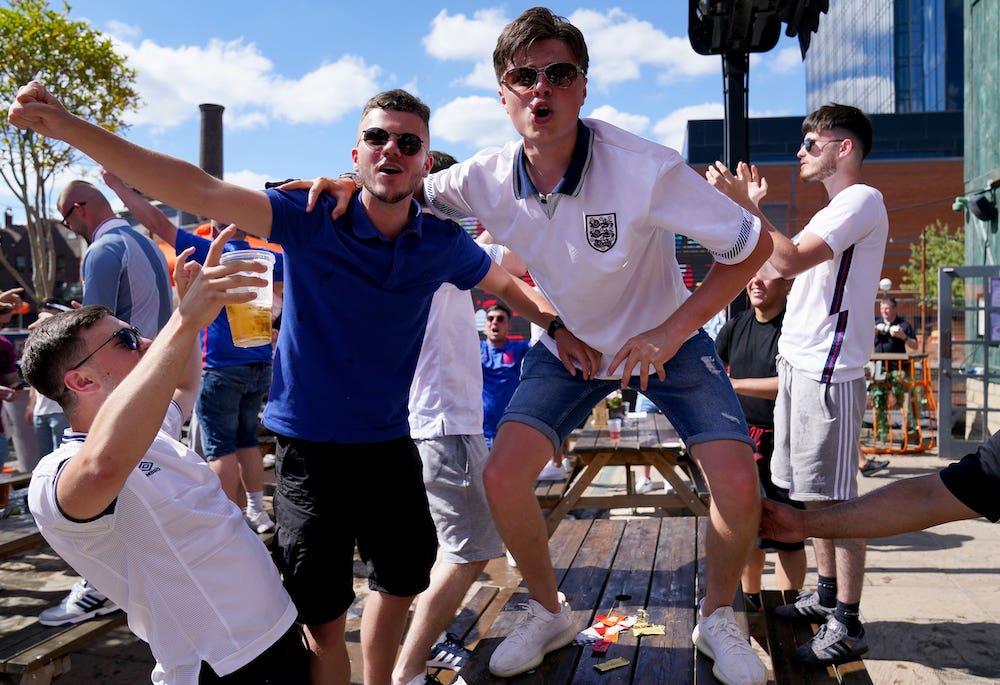 The song, which is 20 years old this year, has been good to the Kittens over the past two decades. It was number one for a month in the UK, in Germany for two months and Australia for nine weeks. It’s been covered by at least three different bands in the US too.

“We can go all over the world, and as soon as Whole Again starts everyone starts singing along, even if they didn’t know Atomic Kitten they know that song,” says Liz.

Now with the Southgate version coming out in time for the England v Denmark game at Wembley, Blues fan Liz says she’s got double the excitement – and double the nerves.

“It’s so exciting but to be honest it’s quite nerve-wracking as well. I want England to win all the time, of course, so now I’m like, I hope the song does well, I hope England do well. And the better England do the better the song’s likely to do as well so we’ve got even more invested in it.”

There has to be a very good reason for me to agree to come into the studio with a hangover… pic.twitter.com/HPH5r8CNcs

She doesn’t really dare think ahead to Sunday, and the what ifs around England in the final – although Jenny has been Covid tested and has flown in from Ibiza so anything could happen.

“I was with my brother Joe after we’d done the recording on Monday night and my phone was ringing non-stop, it was just like the Kitten days. And he said ‘imagine if they actually win the Euros’ but I don’t even think my brain’s gone that far yet.

“Just to hear the fans singing it in the stands was amazing for us, so we’ve been loving this so much and we’ll just see where it goes.”

“Looking back on when we first met; I cannot escape and I cannot forget
“Southgate, you’re the one; you still turn me on
“Football’s coming home again” (or “You can bring it home again”.)