Cage Warriors release CW96 tickets with 20% off for early birds! - The Guide Liverpool
Contact Us Advertise with The Guide Our Video Services Follow us:

Cage Warriors release CW96 tickets with 20% off for early birds! 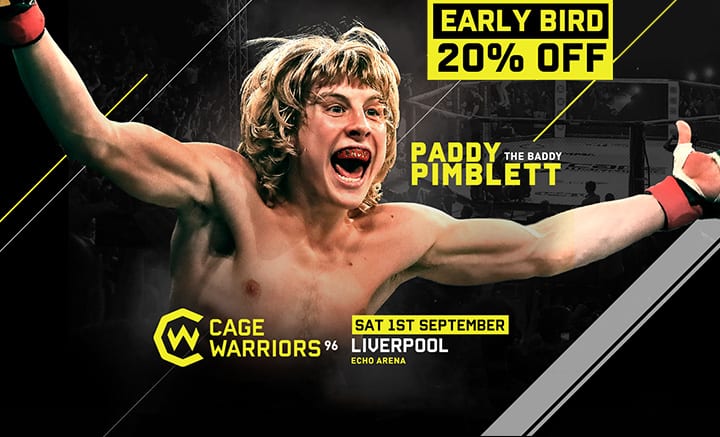 Europe’s leading MMA promotion hit Liverpool’s Echo Arena for CW96 on 1 September, headlined by local hero Paddy ‘The Baddy’ Pimblett, and fans can save 20% on tickets for a limited time only.

2018 is the biggest year of MMA in Liverpool’s history. Just months after the UFC visits Liverpool for the first time ever, Cage Warriors are bringing the MMA party back to the Echo Arena for CW96.

During Cage Warriors’ last visit to Liverpool in February, Paddy Pimblett shocked the European MMA scene with a spectacular second round finish, announcing his return to form. At the same event, Molly ‘Meatball’ McCann became world champion and was signed to the UFC soon after. Darren Till was in attendance and declared Liverpool fans the best in the world due to the incredible atmosphere inside the Echo, and anyone under that roof would have struggled to disagree.

Now, Pimblett looks to put on a performance that will solidify his claim as the number 1 lightweight on the Cage Warriors roster. Liverpool’s middleweight champion Lee ‘The Butcher’ Chadwick, a 37-fight veteran of the sport known for his ferocious knockout power and slick submissions, will also fight at CW96 to defend his belt for the first time.

With many names still to be announced, Echo Arena looks like the place to be on 1 September. Fans are advised to take advantage of the 20% ticket savings while they last – they won’t be around for long!