Cherry Jezebel is coming to the Everyman and tells the story of growing up in Liverpool’s drag world - The Guide Liverpool
Contact Us Advertise with The Guide Our Video Services Follow us:

Cherry Jezebel is a new play by Jonathan Larkin with its heels firmly planted in Liverpool’s LGBTQIA community.

A story of growing up (and growing old) in Liverpool’s drag world, Cherry Jezebel is written by Jonathan Larkin, a graduate of the theatre’s successful writers programmes and currently a writer for Hollyoaks.  The production, directed by James Baker, poses frank and honest questions about why so many queer people still fear for their safety in the city. The production had three sold out rehearsed readings in 2021, ahead of its debut in spring 2022.

After a lifetime of abuse at the hands of family and bad boyfriends, legendary drag queen Cherry Brandy is left scarred and terrified of being alone. When she finds out her best friend Heidi Handjob has fallen in love and is finally embracing her identity as a trans woman, she is terrified that she’s no longer needed. New non-binary queen on the scene, Pearl Reckless, crashes into Cherry’s life and all three clash, but when Pearl is the victim of a homophobic attack, the old and the new realise they may have more in common than they first thought. As one queer family seemingly crumbles…could another one be starting to grow?

As Cherry, Mickey Jones returns to the Everyman after appearing in Our Lady of Blundellsands in September. A member of the Everyman Youth Theatre for many years, he graduated to Radio 4 plays and theatre tours and has appeared in television shows, including Brookside, Family Affairs, Lovejoy and The Bill. For most of his career, he has been a director making short films and is a regular director on Coronation Street, Eastenders, Emmerdale and Hollyoaks.

Heidi will be played by Mariah Louca, who has performed in theatres internationally, from Adelaide Festival to Belfast’s Lyric Theatre. She has also performed on television shows, including Eastenders, Casualty and Doctors for the BBC. For film, her work includes Re-displacement. 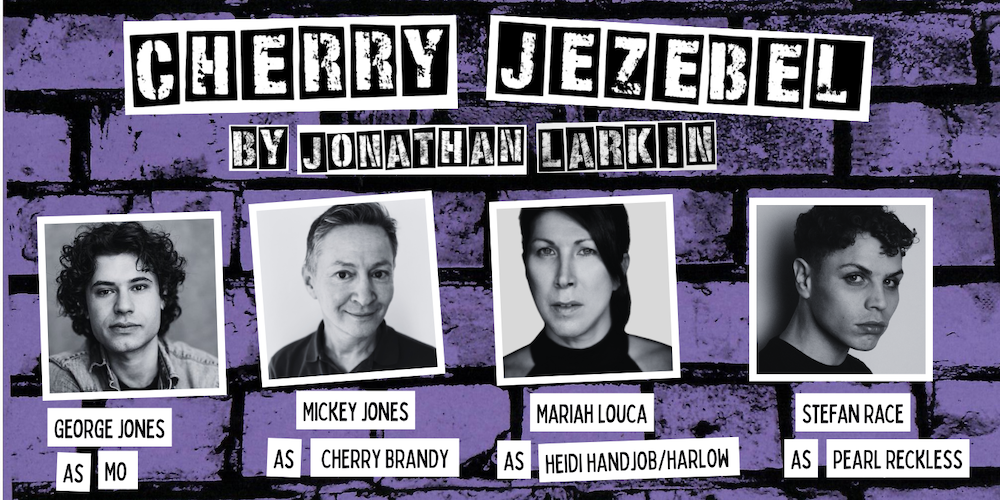 Playing Pearl is Stefan Race whose stage credits include Wendy and Peter Pan (Leeds Playhouse) and Alice in Wonderland (HOME). Film work includes Fantastic Beasts: The Secrets of Dumbledore, The Batman, The Gallery and A Christmas Gift from Bob) and for television, Temple.

George Jones, who plays Mo, graduated from the Royal Central School of Speech and Drama in 2019 and has since performed in plays at Theatre503, Arcola Theatre, The White Bear and, most recently, Royal Court Liverpool in Homebaked: The Musical.

“I started writing Cherry Jezebel about four years ago and it has evolved from a celebration of older queer voices to a piece about trauma, family and the lengths outsiders will go to find a safe space in a violent straight white world. It started out as a collection of nostalgic stories rooted in the past but now has both its high heels planted in the Liverpool of today. I’m looking forward to posing tough questions about how queer people are treated in Liverpool and beyond – but also showing how resilient and fabulous we are.

Watch as we find out what The Vivienne, Pete Price and more audience members think of the show:

“Everyone is looking for family, for safety and for acceptance no matter how they identify, so hopefully people who might not necessarily be LGBTQIA will see Cherry Jezebel and go ‘Oh yes I understand that, I’ve been in her/his/their shoes.’”

Cherry Jezebel is at the Everyman from Tuesday 8 to Saturday 26 March 2022. Tickets priced £10 to £40 are now on sale at www.everymanplayhouse.com