Comedian Tom Stade tells us why Scouse fans are the most hardcore - The Guide Liverpool
Contact Us Advertise with The Guide Our Video Services Follow us: 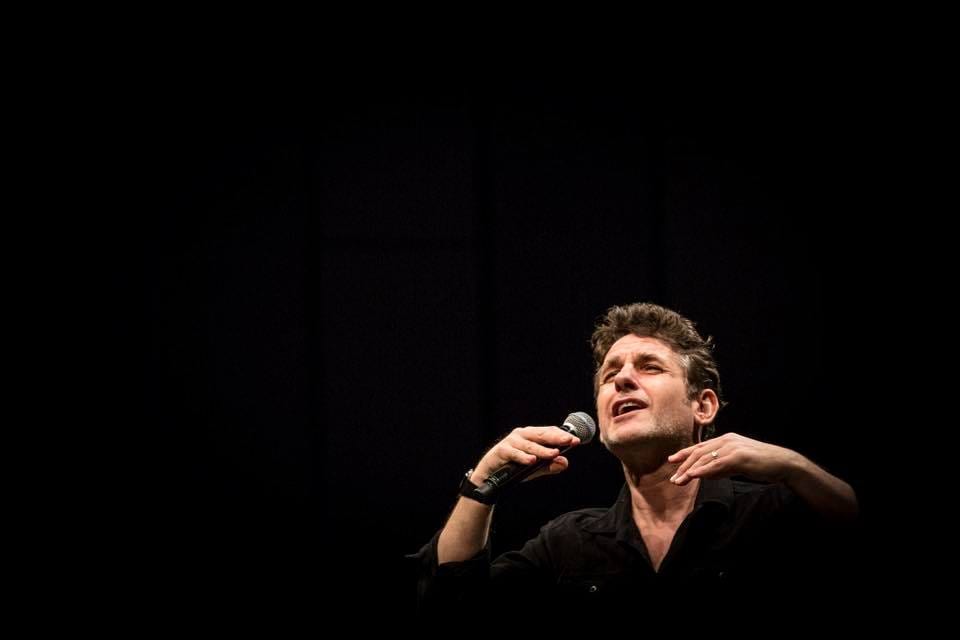 From litter picking to getting the ale in, Comedian Tom Stade is all about giving something back.

Scousers are known the world over for their brilliant sense of humour and we love nothing more than welcoming top comedic talent to our city as more and more big names are drawn to our world class venues. From the huge Echo Arena, stunning Philharmonic Hall to the intimate Laughterhouse Comedy Club, which is where you’ll Canadian export, Tom Stade later this month as he brings his ‘I Swear’ Tour to Liverpool for one very special performance. 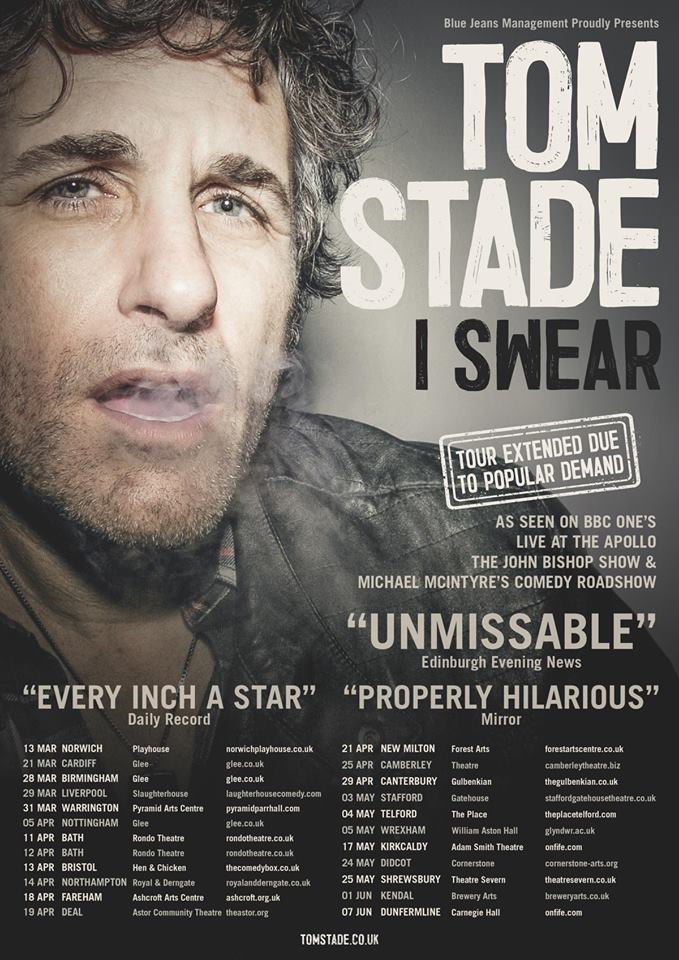 Our Kate had a natter with Tom to find out more about the tour, why he loves Liverpool so much and how he’s saving the world, one ketchup tub at a time.

Tom is horizontal. Even on the phone, his relaxed Canadian drawl comes across as super chilled, naturally hilarious and like us Scousers, he’s a  straight talker. No stranger to Liverpool, Tom has previously played the Philharmonic Hall, Hangar 34 and the Laughterhouse Comedy Club and can’t speak highly enough about his Scouse fan base, he said: “I have such a hardcore fan following in Liverpool, I’ve had fans offer to drive me back to my hotel after gigs and playing the Laughterhouse is cool because I usually go upstairs after the gig for a beer and to hang with fans at the Slaughterhouse. 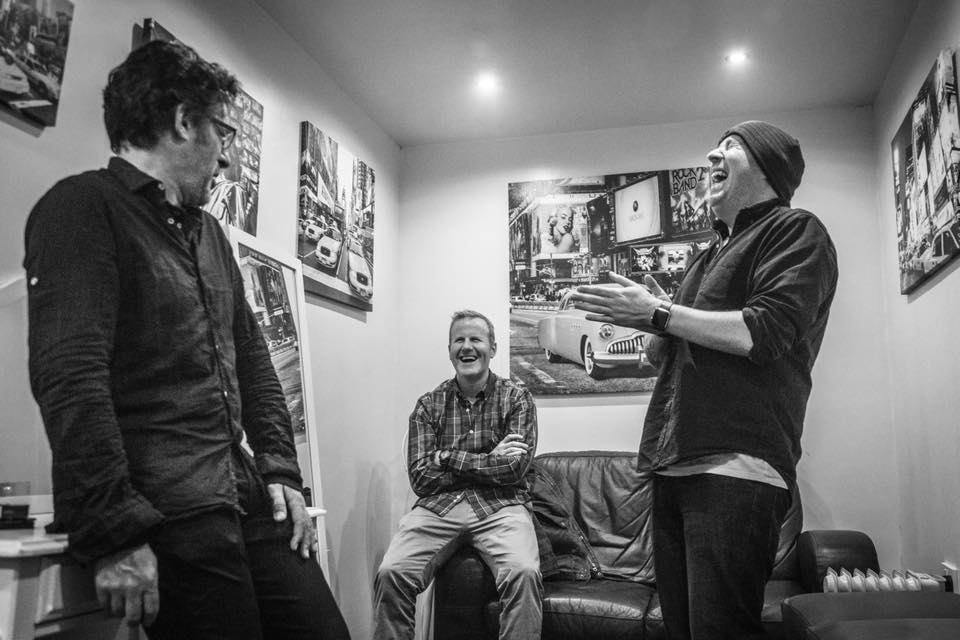 “I mean, I’ve done gigs where I’ve known the entire front row by name you know. I’ve been touring for a long time and knowing these guys just keep coming back for more is a real highlight for me. It’s important to kick back and do something to make their night and if that’s a beer upstairs, then sure, why not?”

Having toured for more than 10 years and appeared on tonnes of TV shows such as Live at the Apollo, Michael McIntryre’s Comedy Road Show, The John Bishop Show and more, Tom Stade never had his sights set on fame, he said: “I first started out as a comedian in 1989, and I sucked. But comedy is something I’ve never gotten bored of you know, fame is just a by-product of that.

“I was persistent and I’ve learned a lot along the way. Comedy is about persistence, just because a joke doesn’t work one night, it doesn’t mean it wont the next, it’s a huge learning experience. If there’s three things in my life I love the most, in no particular order, it’s my kids, my wife and comedy, it’s the constant in my life.” 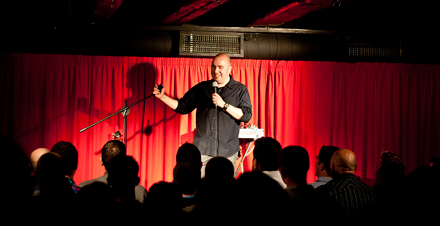 Tom has known Scouse Comedian John Bishop since his early career and is a huge fan of youngster Adam Rowe and Laughterhouse’s very own Chris Cairns, Tom explained: “The biggest, underrated comedian I know in Liverpool has to be Chris Cairns, I mean, he’s so humble, razor sharp and has never had a bad show, this guy is killer and should definitely be featuring on the big shows.”

We asked Tom for some sound advice about breaking into comedy. Having previously accepted invitations to perform at notable comedy festivals worldwide including New York, Aspen, Montreal, Toronto, Amsterdam, Kilkenny, Adelaide, Melbourne and New Zealand, Tom has also entertained British troops overseas, braving the freezing cold Falklands, and been under fire in Afghanistan and Iraq, so it’s safe to say he knows his onions. Tom said: “The best advice I’ve had was from Robin Williams and he said ‘If you want to be a star, start acting like one’.

“It took a few years for me to figure that out and I realised that the way I handled myself was a big part of my future in comedy. I would tell anyone wanting to get into comedy to be persistent. Basically you want to be the opposite of a rock star, okay? Rock stars start out all loud and energetic and they’re rocking hard man, but after a while they’re tired and they can’t rock out like that anymore, you know, like Mick Jagger (Tom likes a little dig at Sir Mick).

“Where as comedy works the other way around. Start out testing your stuff, learning what works and as you get older and more experienced you’re gonna smash it on these tours and big gigs.”

Watch above as our Jay caught up with Chris Cairns at the relaunch of the Slaughterhouse venue following its revamp in 2017.

Tom has a packed UK Tour schedule ahead and 2018 is all about working on his creativity as well as cleaning up his local park. Tom explained: ” In 2018 I’ve set myself some exercise goals, I’ve started picking up garbage in my local park, you know, for no real reason but I do it while I walk my dog or go for a run. Yeah, I’m getting a full on work out squatting to pick up those McDonald’s ketchup pots, those things are EVERYWHERE!

“It’s a good habit to get into, I’m healthier, I’m saving the planet and I get time to let my mind wonder. I only do the garbage picking when I’m on my own, like I wouldn’t make my wife do it, if she was with me, that’s a bit random.”

To get your tickets to ‘I Swear’ at the Laughterhouse Comedy Club on Thursday 29th March 2018, click here or head to www.laughterhousecomedy.com to find out more. Alternatively, you can call 0800 177 7575 to speak to a friendly booking agent instead.
Images courtesy of Tom Stade Facebook.