Cut Throat Pete tells us what going to the barber's in Liverpool will look like after lockdown - The Guide Liverpool
Contact Us Advertise with The Guide Our Video Services Follow us:

Like the rest of the country, it’s been 10 weeks since Liverpool blokes have been able to go to the barber for a decent haircut. But with restrictions starting to be lifted, it might only be a few weeks before they can get the clippers going again.

Barber Pete Cranfield, who owns Cut Throat Pete’s, has been making plans towards a July 4 reopening and he’s revealed what clients can expect when the much-awaited day finally comes.

That includes reduced numbers of chairs in each of his two shops and his own studio, visors and gloves for barbers and masks for customers.

“Barbering is such a hands-on job so we can’t take any risks,” he said. “I really enforce cleanliness and hygiene anyway, that was something I was taught when I became a barber, but now every shop is going to have to enforce that level of sanitation because we’re in such close proximity with people.  Everyone’s going to have to up their hygiene games.”

Pete has taken out chairs in his shops in Gradwell Street in the Ropewalks and Jamaica Street so only two barbers will be cutting at any one time, allowing chairs to be well spaced. In Jamaica Street, which is a two-storey building, there’ll only be one client on each floor.

“In September last year all our barbers became self-employed, so they are freelance but we are still part of the same team so since the virus outbreak started and the restrictions came in I’ve enforced everything.

“When we do reopen staff will all have to wear full protection – visors and gloves – and we’ll be asking every client to wear a mask while they get their hair cut. We also won’t be offering any facial treatments so no beard trims or shaves in the initial reopening phase.”

With the focus on hygiene and safety for clients and staff, Cut Throat Pete’s will also extend appointment times to allow for additional cleaning between each cut.

“My personal appointments used to be 1hr and 15mins but that will go to 1hr and 30mins,” explained Pete. “I normally disinfect my chair and workstation at the end of every day and in between each haircut I disinfect my tools, but now we’re going to disinfect the chairs and the whole work area in between each client so everything is fully sanitised before anyone sits down.

“That’s why we’ve allowed an extra 15 minutes between clients to make sure everything is safely ready to go again, and I’ve found a company which does a disinfectant spray clean that lasts a month so we’ll be getting them in regularly to do the entire shop too.”

Out and about & off the stairs☀️Today @Calderstones Park, with news from The Reader & more?

Also the #EFC fan taking on a challenge with a difference for #NHS, a new Liverpool beer listings site?& news from @Liverpool_ONE. @RISE_liverpool & more.

MORE - A new project is showcasing female artist’s creative response to coronavirus, as part of the city’s RISE season

Pete says, like lots of salons and barber shop owners, he’s been inundated with messages from clients eager to get their hair cut by a professional again.

“I’ve had a crazy amount of phone calls and emails every day from people asking for updates and I’ve also had people offering me silly amounts of money to cut their hair during shutdown. They’ve basically said I could name my own price, that’s how desperate they are for a good haircut!

“They want me to go to their houses which I wouldn’t do – I haven’t cut hair for 10 weeks and we had a baby at the end of March so I have to be extra careful, so I haven’t even been tempted.

“But people are that used to feeling good about themselves and barbering is a precision job. I’ve had so many people talking to me on social media saying they never understood or respected just how hard it is because they’ve been trying to trim their own hair or get their wives or girlfriends to do it.” 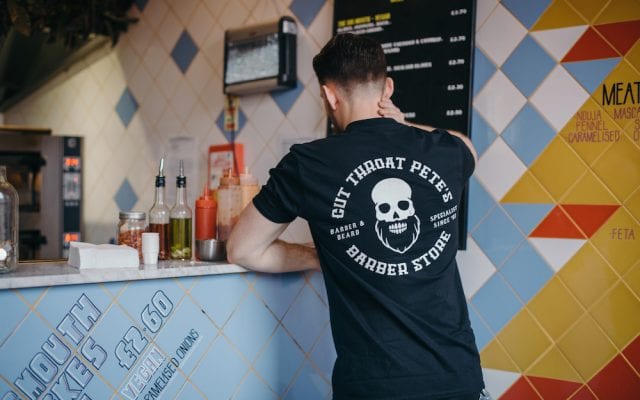 With capacity halved, Pete admits it’s going to be tough to sustain the new model in the long-term, so he’s hoping restrictions will ease further as testing increases.

“We’re going to hopefully open on July 4 and then reassess on September 1 to see if we’re able to reintroduce shaves and beard trims and maybe put appointment times down and increase customers,” he added.

And in the meantime, he’s looking to other countries to see how they’re coping.

“Germany is back open and I’ve got a couple of friends there and in the States who I’ve been contacting to find out how things are going. I’m looking at disposable gowns because that was one of the stipulations in Germany, that’s on their guidelines, so it’s really just about seeing what’s working for them.

“The priority is to get the doors open, get back to work and make sure everything’s really clean and safe for everyone.”