Dingle's Park Palace Ponies make doorstep visits to cheer up their neighbours in lockdown - The Guide Liverpool
Contact Us Advertise with The Guide Our Video Services Follow us:

Meeting up with neighbours might still be under lockdown restrictions but that hasn’t stopped a group of lucky streets in Dingle from welcoming some special guests.

Ponies from Park Palace Ponies on Mill Street have been going door-to-door during the school half term holidays to cheer up youngsters and adults with doorstep visits.

And a couple of cheeky ones have made themselves right at home, nudging their way into hallways to say hello! 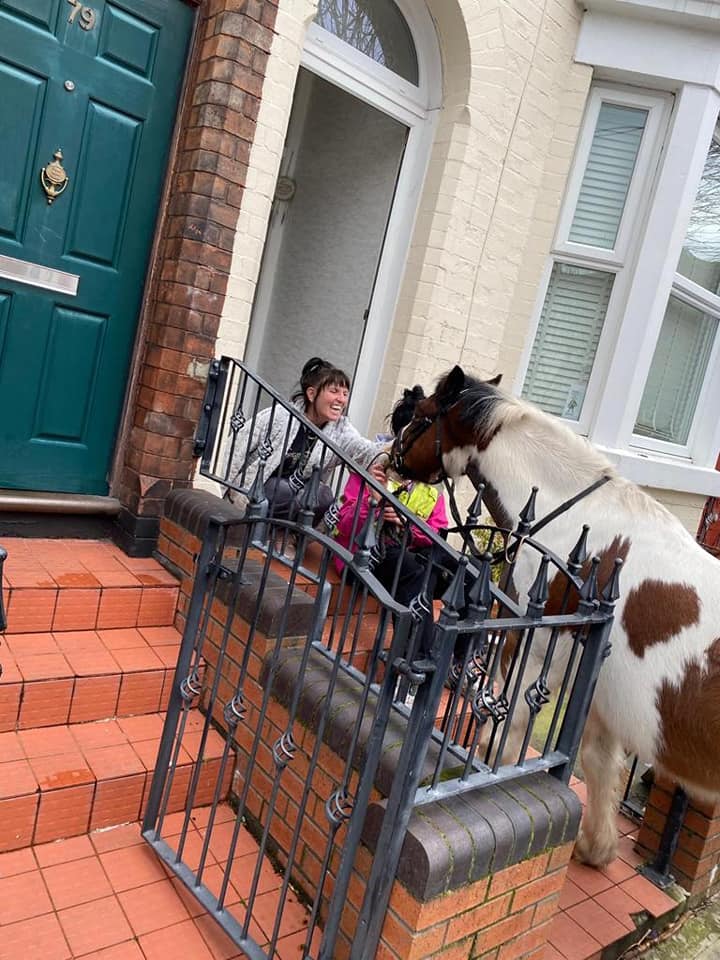 Park Palace Ponies has been a fixture in L8 for almost four years, and its six equine residents have become a familiar sight in the area.

But, with the usual classes temporarily suspended because of Covid, this is the first time they’ve ventured up and down streets to get to know everyone better.

Director Bridget Griffin says the idea came from the launch of The Great Big UK Art Exhibition, asking people to create an artwork at home and display it in their front windows, and its first theme of animals chosen by Sir Anthony Gormley.

“Usually over half term and school holidays we get a grant from Merseyside Play Action Council to put on a free holiday scheme but obviously this time we couldn’t do that,” she explains. “We thought it was such a shame not to do something, so when we saw the art exhibition we thought we could make the ponies into live models who could walk up and down different streets every day.

“The idea was for mums and dads to come out, take a photo and the kids to draw that. But then we realised it also gave us the chance to have a chat and just a general wellbeing boost for the community. 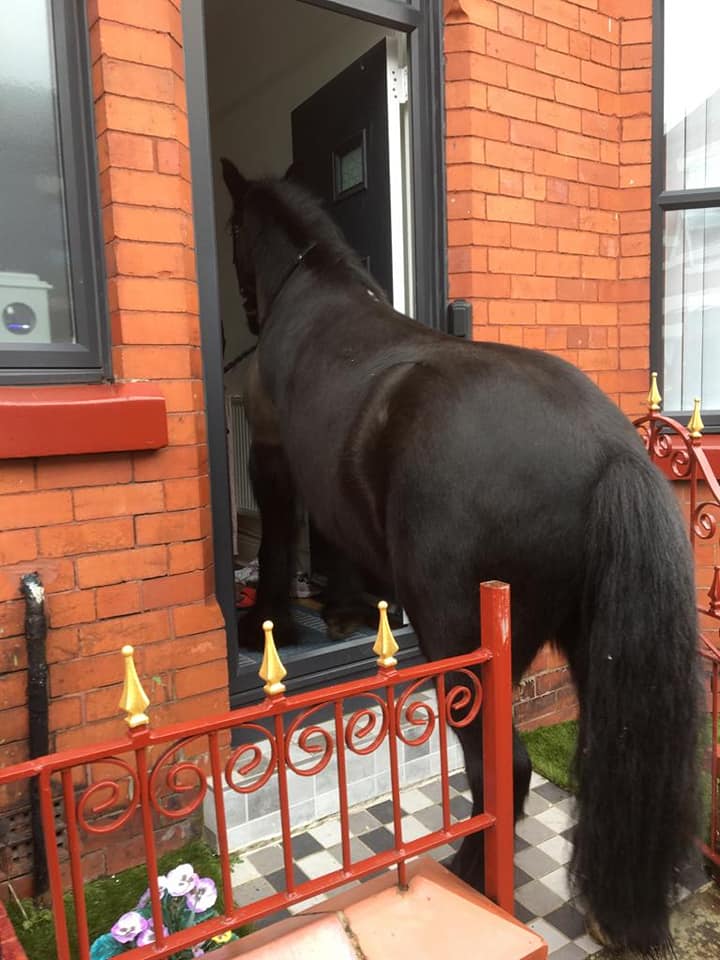 “A lot of the kids who ride with us live in the local area so they haven’t seen the ponies up close for months. Walking them down the streets and up to people’s doors, the response we’ve had has been incredible. Everyone’s been so welcoming, they absolutely love them.”

Park Palace Ponies opened in Dingle almost four years ago, intended as a six-month project set up by the British Equestrian Federation to look at the feasibility of inner city riding.

But at the end of the six months, everyone had fallen in love with the ponies and refused to let them go!

“There was uproar from the local community so we managed to stay,” says Bridget.  “We started with funding from British Equestrian Federation and the city council, as well as quite a substantial private donation, and since then we’ve had a grant from Sport England so we’ve been able to keep offering riding lessons and pony care courses to kids aged 4 to about 11.

“We’ve also been very lucky to have people who sponsor the ponies, and as time’s gone on we’ve established good relationships with the Aintree Equestrian Centre and the Peter O’Sullivan Trust who help us out.

“It’s run as a social enterprise so all our directors are volunteers, and then we have paid staff from the local area who really want to work with horses but would never have had the opportunity.

“We all know how good it is for physical and mental health to spend time outdoors and also time with animals so for us, it’s about bringing those benefits to as many people as possible.”

For 25-year-old student Bridget, who comes from L8, Park Palace Ponies isn’t just a pastime, it’s become her way of life. She actually lives with the ponies, in a converted shipping container, on land next to the centre where they’ve built a stable complex. 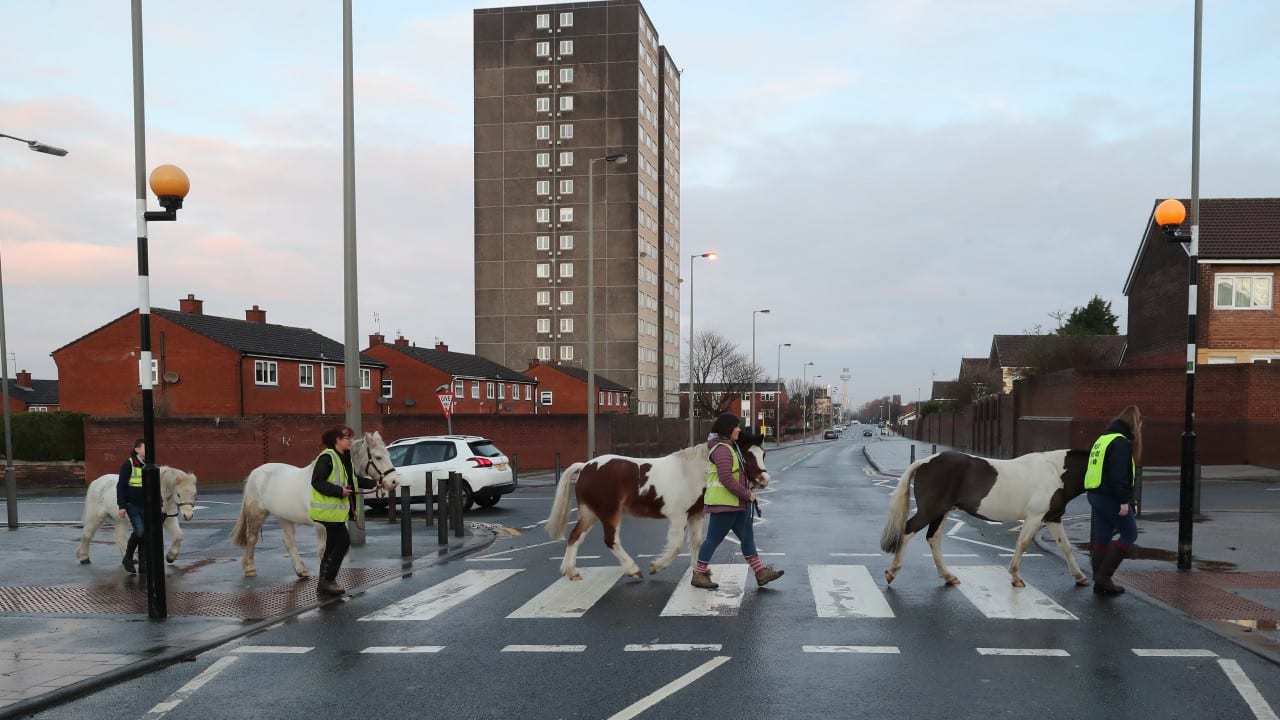 “I stay there for on-site security, but it’s in case of fire rather than damage because we’ve never had any issue with that. I think because we’ve embedded ourselves in the local community, we’ve been welcomed with open arms. They are the Dingle Ponies, they’re not our ponies, so everyone treats them as their own and that’s what we’ve always wanted.”

In the first lockdown, the ponies all went off to graze for six months. “They were on furlough!” jokes Bridget. “When they were away, the community was always asking where they were, when they were coming back and when they could see them again. Their field is by Park Hill allotments, so they walk down there and the kids going to school always say hi to them.

“They missed them so much when they weren’t here so this time we’re thrilled they’ve stayed at home and it’s a bit of normality for everybody.”

Bridget says the lockdown walks have only made families love their ponies more.

“People’s faces just light up when they see them coming and they’ve been waiting for ages on the doorsteps so they don’t miss them. They know them all by name – there’s Magic, Malu and Millie, and we’ve got Kev, Will and Moses – and people are always drawn to one or two, they always have their favourites.

“We’ve been out right through half term and we’ve seen so many kids and adults, a lot of whom have been shielding on their own and haven’t really left the house for almost a year.

“The ponies are such a calming influence, even a couple of minutes spent with them is an absolute joy, so to bring that to so many other people been a real pleasure. It’s something so small for us but it means so much.”

Find out more about the Park Palace Ponies on the website here.