“Don’t ignore bowel cancer symptoms out of fear or embarrassment” Clatterbridge patient shares his story - The Guide Liverpool
Contact Us Advertise with The Guide Our Video Services Follow us:

A man who thought his rapid weight loss was down to working too hard and not eating properly is urging others not to ignore symptoms that could be bowel cancer.

Rob Gore, 40, from Warrington, was initially diagnosed with bowel cancer in 2019 after wife Kirsty persuaded him to go to the GP about his unexpected weight loss. He had also been passing blood when he went to the loo.

Now three years on, Rob continues to have regular check-ups from his team at The Clatterbridge Cancer Centre and he is keen to raise awareness of bowel cancer so that others don’t ignore the early signs out of fear.

“By the time I received my diagnosis, I’d resigned myself to the fact it was something serious,” says Rob. “I had bowel cancer and it had spread with nodules in my liver and lung. I always tell friends, family, anyone – if you have any signs at all, please go and see someone.

“It feels huge when something in your body isn’t right but there’s no need to be scared. Getting diagnosed with cancer isn’t all doom and gloom. There’s treatment available so it’s always best to get symptoms checked out and either put your mind at rest or get the care you need.”

After his diagnosis in March 2019, Rob had six rounds of chemotherapy at The Clatterbridge Cancer Centre’s outreach clinic in Halton Hospital’s CanTreat unit, followed by further treatment to help stop the cancer from spreading further. He sees the Clatterbridge team in Halton every few weeks to collect his cancer medication and get his ‘port’ flushed – the port is a little catheter that stays under his skin for when he is having chemotherapy.

He also has regular scans and check-ups from his team at Clatterbridge to monitor his cancer. A scan a year ago showed Rob had nodules in his lung so he had another six rounds of chemotherapy to shrink the tumours. He has also since had lung ablation – a non-surgical procedure that uses heat to kill cancer cells – at the Royal Liverpool Hospital to treat a nodule that looked like it was returning. 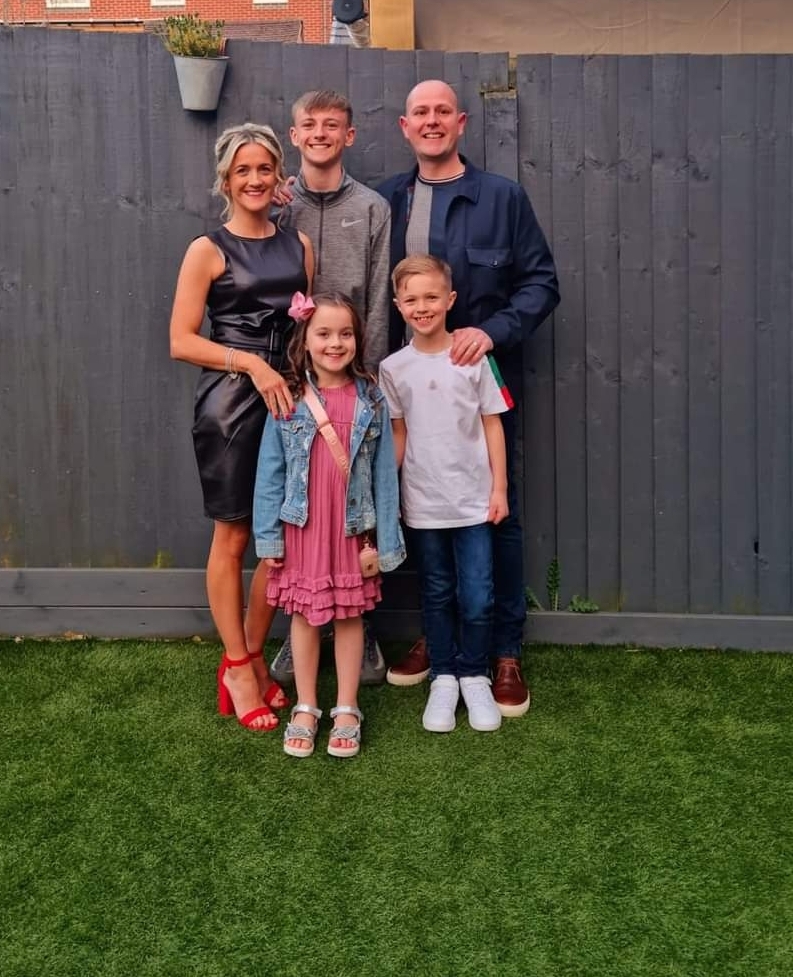 Rob is currently doing well and back at work full-time. A few weeks ago, he celebrated his 40th birthday with a fantastic family holiday in London with his wife and children, followed by a luxury trip to Belfast with his wife.

He wanted to share his story during Bowel Cancer Awareness Month this April to help others who may be worrying about symptoms or a recent diagnosis.

“My wife and the kids have been brilliant. I have two stepchildren and a daughter and they’ve just climbed Moel Famau in north Wales to raise money for a charity that supports children whose family members have cancer. They were really keen to give something back and I’m so proud of them.

We’re just making the most of everything we can – trying to get out there, do stuff and enjoy life,” says Rob, a supply chain logistics manager. “It’s been really nice to be back in work as well, seeing people, because I’m not one for sitting around.

“The care I’ve had from the NHS has been great – I can’t say enough about how amazing everyone has been. I see my nurse consultant, Jeanette, regularly. She’s fantastic and I have a lot of trust in the team. I’m just getting on with things and living my life.

“I tell everyone – if you have any symptoms or are worried you may have bowel cancer, please go and get checked out. Don’t put it off.”

“Rob did the right thing by going to see his GP when he noticed blood in his poo and that he had lost weight without trying. People sometimes dismiss early signs of bowel cancer, either from embarrassment or thinking it’s just a dodgy tummy.

“If you have persistent changes in bowel habit lasting three weeks or more, blood in your poo or abdominal pain or bloating when you eat, ask your GP for advice. It’s also important to take part in bowel cancer screening if you’re invited to do so.”

More than 90% of people with bowel cancer have one of the following combinations of symptoms:

See a GP if you have any of these symptoms for three weeks or more.