Eli the cat is living his best pub life in Liverpool - The Guide Liverpool
Contact Us Advertise with The Guide Our Video Services Follow us:

Eli the cat is living his best pub life in Liverpool

Finding a café or restaurant that’s dog friendly isn’t that unusual, but it’s not often you come across a cat enjoying a night in the pub.

But Eli the Adventure Cat loves nothing better than going out and about in Liverpool, people watching and making new mates.

In fact his owner, veterinary student Molly Bradshaw, says he’s got so used to being the centre of attention, he can’t quite understand why everyone wouldn’t want to say hello and give him a cuddle.

“I think he actually gets offended when people don’t approach him because he fancies himself as a bit of a celebrity now,” she laughs. “We were in the Baltic Market and he was on a bench next to me, but because of his ginger coat he blended in and people didn’t notice him. After a while he rolled on his back and started purring and reaching his arms out. It was almost as if he was going ‘hello, I’m still here!’.”

Molly and Eli have been going on adventures together since he was a kitten. She got him when he was nine weeks old and noticed how confident and relaxed he was straight away.

“When I first picked him up, I had Rocky my boxer dog in the car on the way home with him and he was this tiny little kitten sat at the window, looking out and watching the views. He was playing with everyone in the car, completely unfazed by everything. 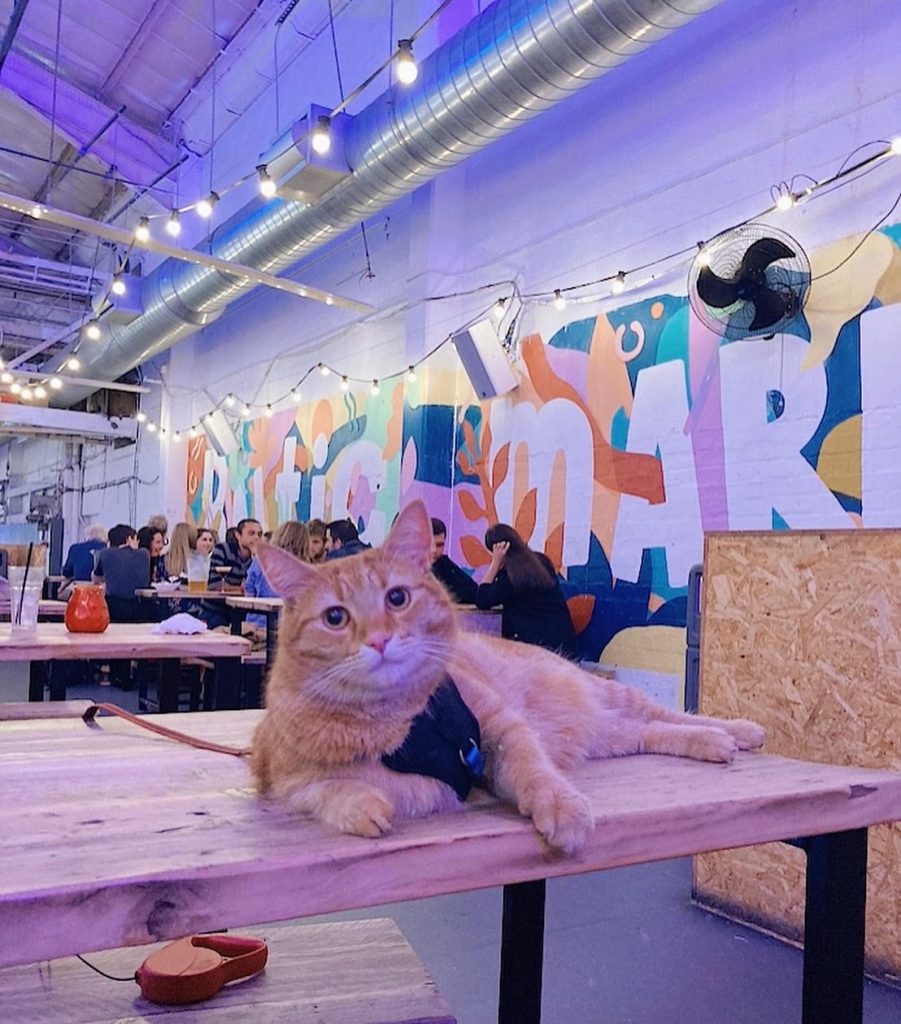 “I’d had an idea in the back of my head that I might try and lead train Eli because there’s a guy on Instagram – 1bike1world – and he travels around on his bike with this little kitten he found in a basket on his bike. I saw he was on a lead and he was really happy with that and I thought I’d give it a try.

“I got a teeny baby harness from the pet shop and on the second day I just popped Eli in it and he wasn’t bothered at all. I gave him loads of treats so he always associated it with something positive and then as soon as his vaccinations were done I just started taking him to friends’ houses at first and then on little woodland walks.

“I carry him a lot of the way, then I put him down and let him sniff and get used to wherever we are, but he’s just been so easy. This little cat is so confident, I’ve absolutely hit the jackpot with him as an adventure cat.”

Molly says ironically the first bar she took Eli to was Brewdog, but he’s been on quite a pub crawl since then, especially now they’ve moved to live near Smithdown.

“We go out in the city centre, and we’ve started exploring the pubs around Smithdown and Lark Lane. He’ll basically go anywhere he’s allowed. Anywhere I take him to I generally say beforehand ‘are you pet friendly? I have a cat but he’s lead trained and really confident’. I’ve only ever had one place say no, and that was because they were worried he’d stress the dogs out.

“But I find that when we’re in pubs, dogs don’t seem that bothered by him. Eli is usually above them on a chair or the table so it makes him feel more secure and because he’s not running away they think he’s one of them! 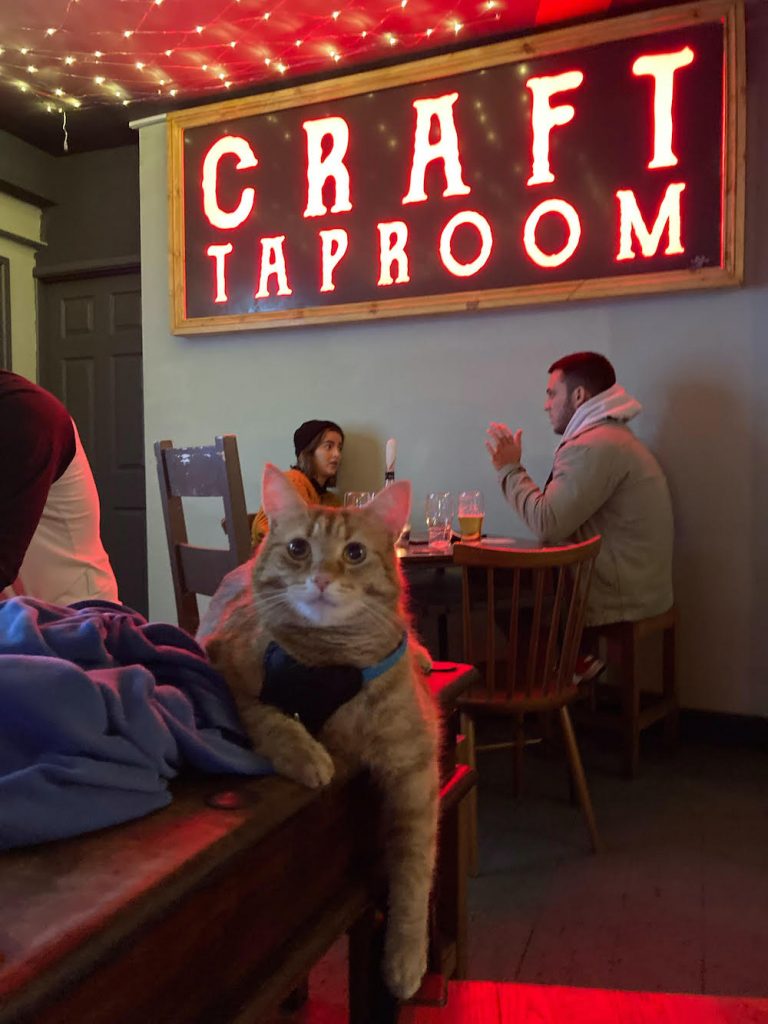 “In Kelly’s Dispensary on Smithdown Road they have a shelf that runs along the back and he likes sitting on that, surveying the room and when he spots new people come in he’ll hop down and go over to say hello. He’s so nosy, he’s straight over to sniff them and say ‘hi’, rubbing his head on them. He honestly just wants to be everybody’s friend.”

Eli the Adventure Cat has his own Instagram account where his new mates can keep up with his busy social life.

“That wasn’t my original plan, I just wanted to take him to the pub purely so he wasn’t at home on his own and I also think part of the reason he loves it so much is cats prefer going out at night, so pub life is perfect hours for Eli. 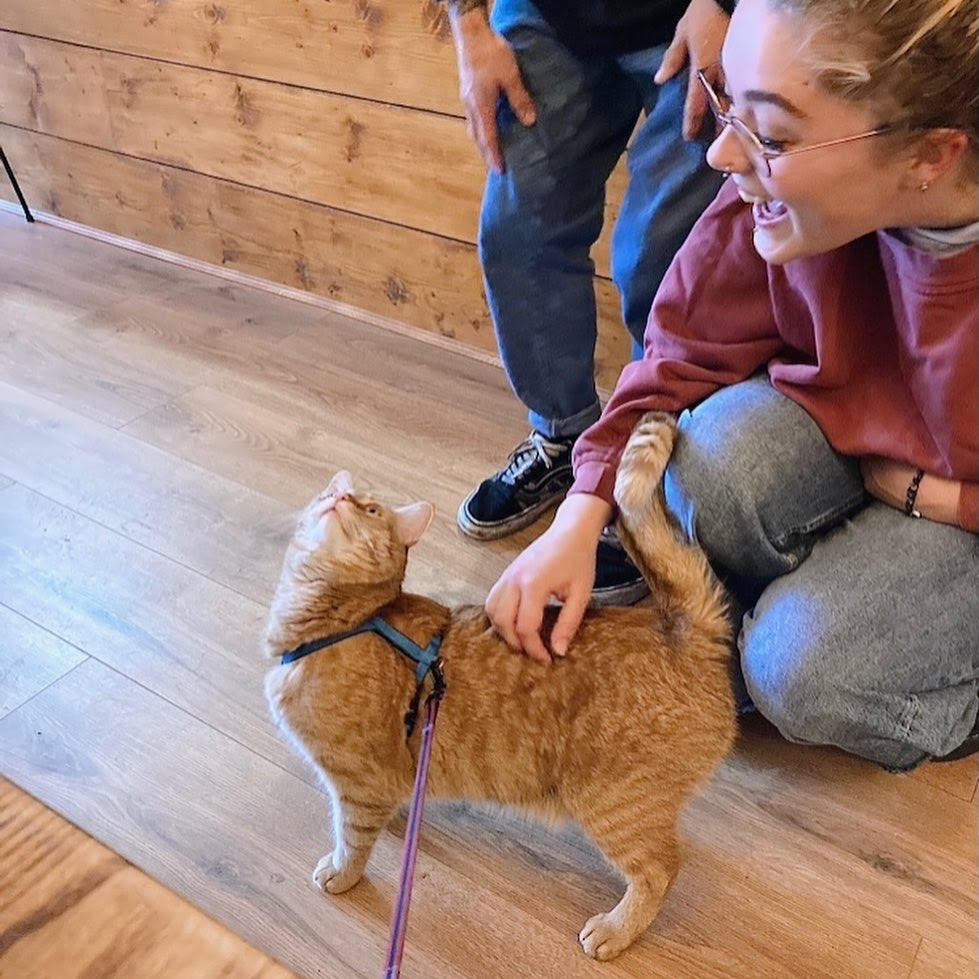 “I was taking pictures of him, more because he’s so cute, and then I had quite a few friends saying I should start an Instagram.

“Now in Liverpool when we’re out I get people coming up and asking ‘is this Eli?’ and they already follow him or their friends have told them about him.

“In Bedfordshire where I’m from people find it a bit strange, but in Liverpool they’re just so friendly and 99% of the time they go ‘oh my god it’s a cat on a lead, can I say hi, can I stroke him?’

“He loves it and I love the positivity and how much happiness he brings wherever he goes.”

MORE - Meet volunteer team, Care for the Paw who are helping Liverpool homeless people look after their dogs