Everton fixture against West Ham United is dedicated to BBC Children in Need - The Guide Liverpool
Contact Us Advertise with The Guide Our Video Services Follow us: 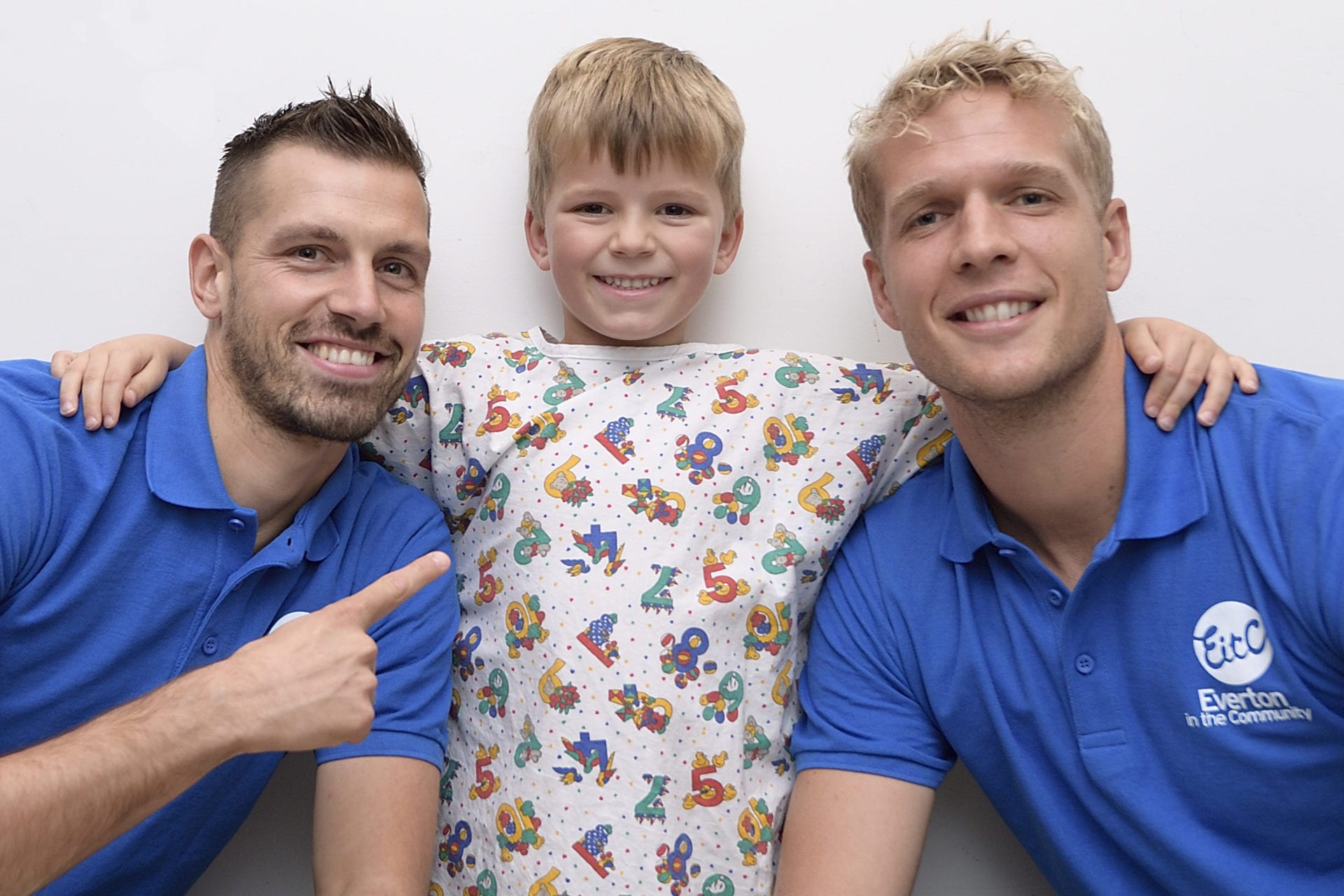 Everton Football Club and Everton in the Community have joined forces with BBC Children in Need and the Premier League to dedicate Saturday’s home game against West Ham United.

Everton stars Morgan Schneiderlin and Jonas Lössl visited Alder Hey Children’s Hospital earlier this week to find out more about the morale-boosting play therapy sessions that Everton in the Community staff deliver on the wards.

The Blues duo joined Everton in the Community’s disability coach Mark Dolan on his daily rounds at one of Europe’s busiest children’s hospitals, where the Club’s official charity have been providing play therapy sessions for more than 10 years.

Schneiderlin and Lössl accompanied Dolan as he made his way around wards 4A and 4C with a trolley full of toys and games, all designed to provide fun activity, interaction and support for children and their siblings. 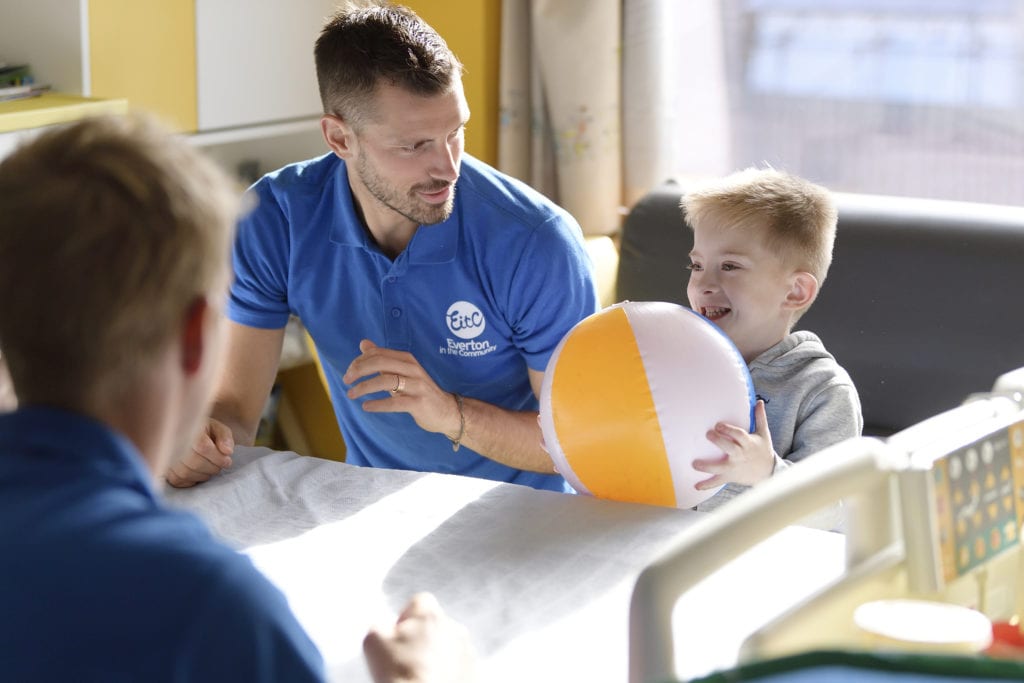 Everton Football Club and Everton in the Community have joined forces with BBC Children in Need and the Premier League to dedicate Saturday’s home fixture against West Ham United to raising awareness of Children in Need’s quest to ensure that every child in the UK has a childhood which is safe, happy, secure and allows them the chance to reach their potential.

Pudsey Bear will make an appearance pitchside and on the Fan Zone, while both teams will be warming up in BBC Children in Need t-shirts. All match-worn shirts will also be auctioned off following the game to raise vital funds to support Children in Need’s work across the UK.

As part of the matchday build-up, Everton has gifted important matchday roles to young children from BBC Children in Need funded projects in the North West, including a junior Club photographer, stadium safety officer, stadium announcer, junior reporter and Premier League matchday manager, as well as a behind the scenes first-team staff experience. 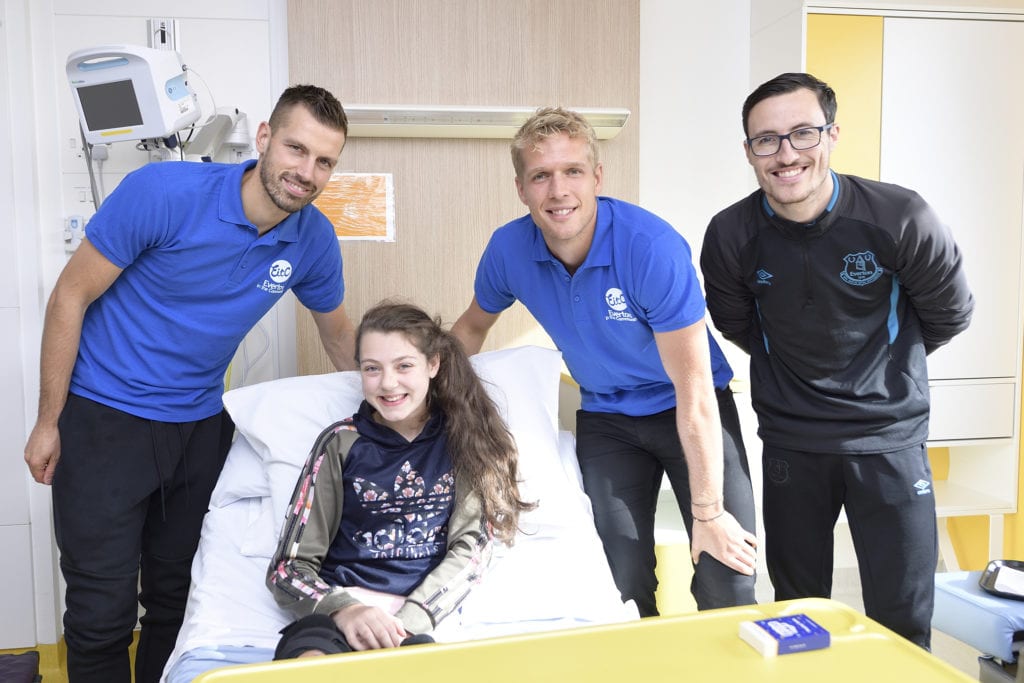 After learning more about the work Everton in the Community does in conjunction with BBC Children in Need, midfielder Schneiderlin said: “We have had a really fun day with the children at Alder Hey and played some card games and board games with them. It was beautiful to interact with them and spend a few moments with them because they have been through a difficult time. It just puts reality into perspective, and when we can help others it is the best thing we can do in our job.”

The visit to Alder Hey was summer signing Lössl’s first trip to the children’s hospital. He said: “To see the work that everyone does here is incredible. It is fantastic to come here and just feel the presence that a lot of people have here to bring a smile to the kids’ faces. I’s really nice to be a part of that.”

In June 2018, Everton in the Community’s disability programme was awarded a three-year grant of £89,823 from BBC Children in Need which has helped to support the charity’s work in providing football and sporting activities to disabled children across Merseyside, giving them the same opportunities as their non-disabled peers.

The funding received from BBC Children in Need also helps to part-fund Everton in the Community’s daily play therapy sessions in Alder Hey Children’s Hospital. Staff from the Club’s official charity currently work in Alder Hey five days a week, engaging with around 100 children a month, with the sessions also providing light relief to parents and siblings during a difficult time. 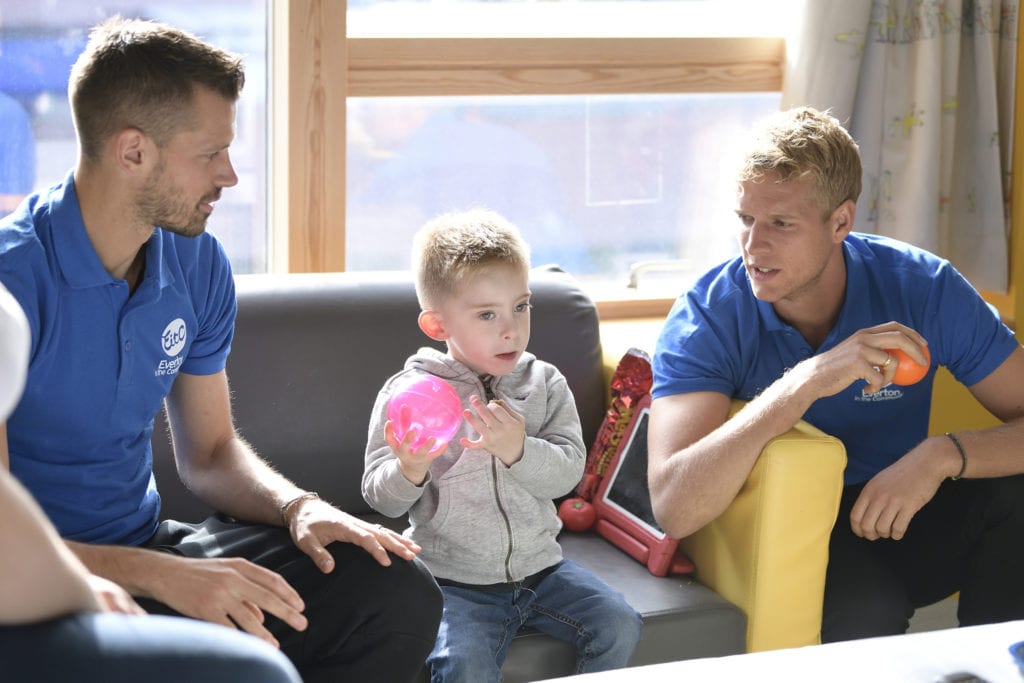 “Children in Need fund us to be able to deliver our work so it’s massive to us – without them we wouldn’t be able to come in and do this all the time,” said Dolan.

“The funding helps go towards some of the equipment, it helps goes towards the coaches’ time, and it is a massive and vital part of our programme so we can’t thank them enough.”

Everton in the Community’s work in Alder Hey Children’s Hospital is just one element of how the charity works closely with BBC Children in Need. They also partner on the Premier League Kicks social inclusion programme, which sees coaches engage young people across Merseyside in positive sports activities and workshops, supporting them to build more positive behaviours and attitudes and contribute to stronger and safer communities.

To find out more about Everton in the Community and its programmes, visit www.evertonfc.com/community.