Everything you need to know about Virgin Voyages Scarlet Lady and Liverpool Cruise Terminal - The Guide Liverpool
Contact Us Advertise with The Guide Our Video Services Follow us:

After successful journeys into the rail and airline businesses, it seemed space might be the final frontier for Sir Richard Branson… but that was until he set sail on a mission to conquer the seas too with Virgin Voyages and the Scarlet Lady.

The entrepreneur has launched the first of his Virgin Voyages cruise ships, Scarlet Lady, and Liverpool was treated to an early viewing as she weighed anchor in the city’s cruise terminal today (February 25) on her way to Miami from where her maiden voyage will begin on April 1.

Delivered on Valentine’s Day, February 14, by Fincantieri of Italy, she is Sir Richard’s very own love boat, but we reckon it’s cruise passengers who are going to fall head over heels with the luxurious liner. 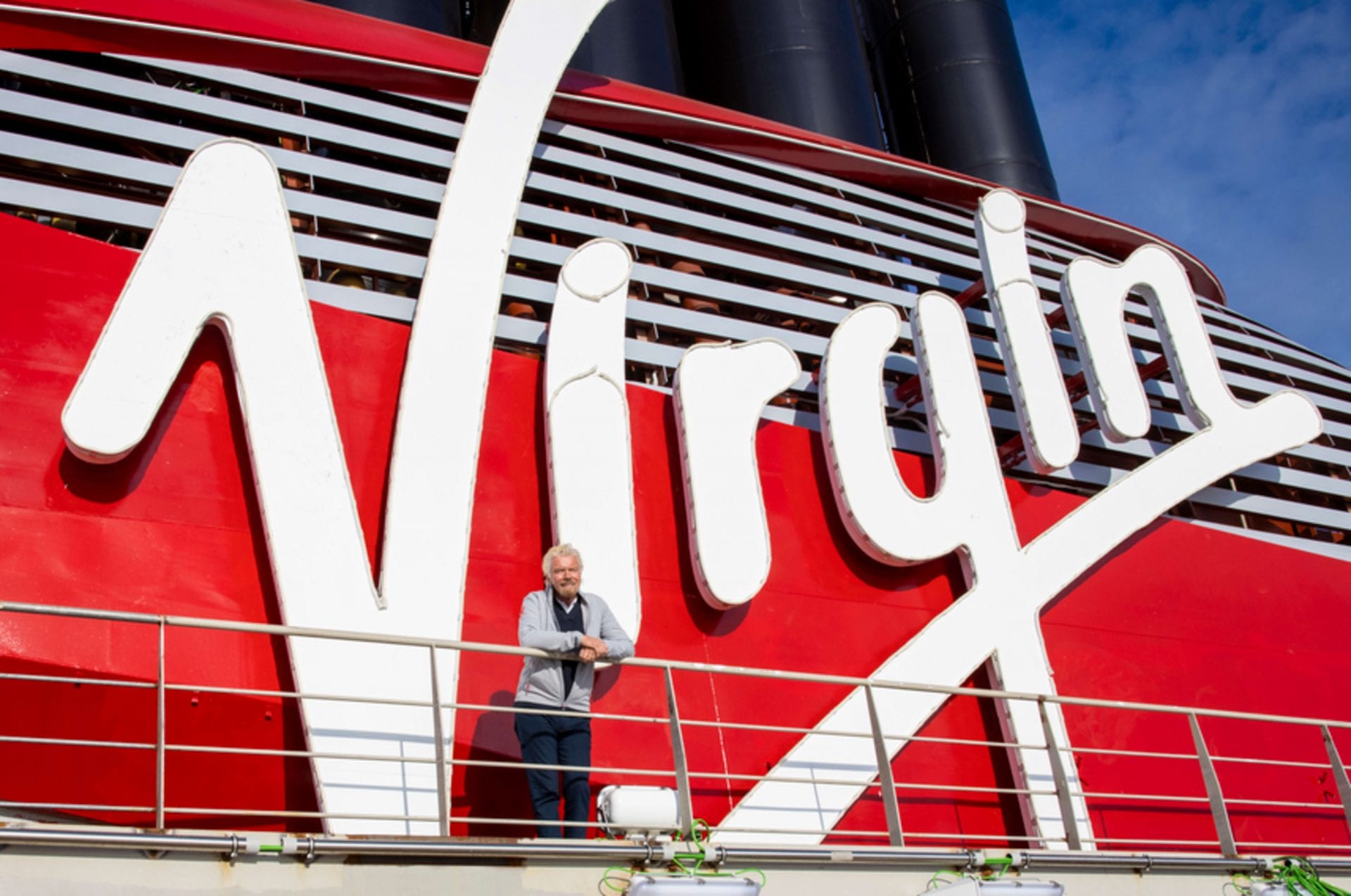 Scarlet Lady was designed to reflect a yacht’s sleek luxury and, with spaces created by top designers, she aims to be a sanctuary at sea for the over-18 traveller.

Scarlet Lady will sail from Miami to the Caribbean and, looking after its sailors, will be a crew of 1,150.

Scarlet Lady will be one of four ships.  (The second ship will be Valiant Lady and will homeport in Barcelona, with cruises around the Mediterranean).

Where would I sleep? 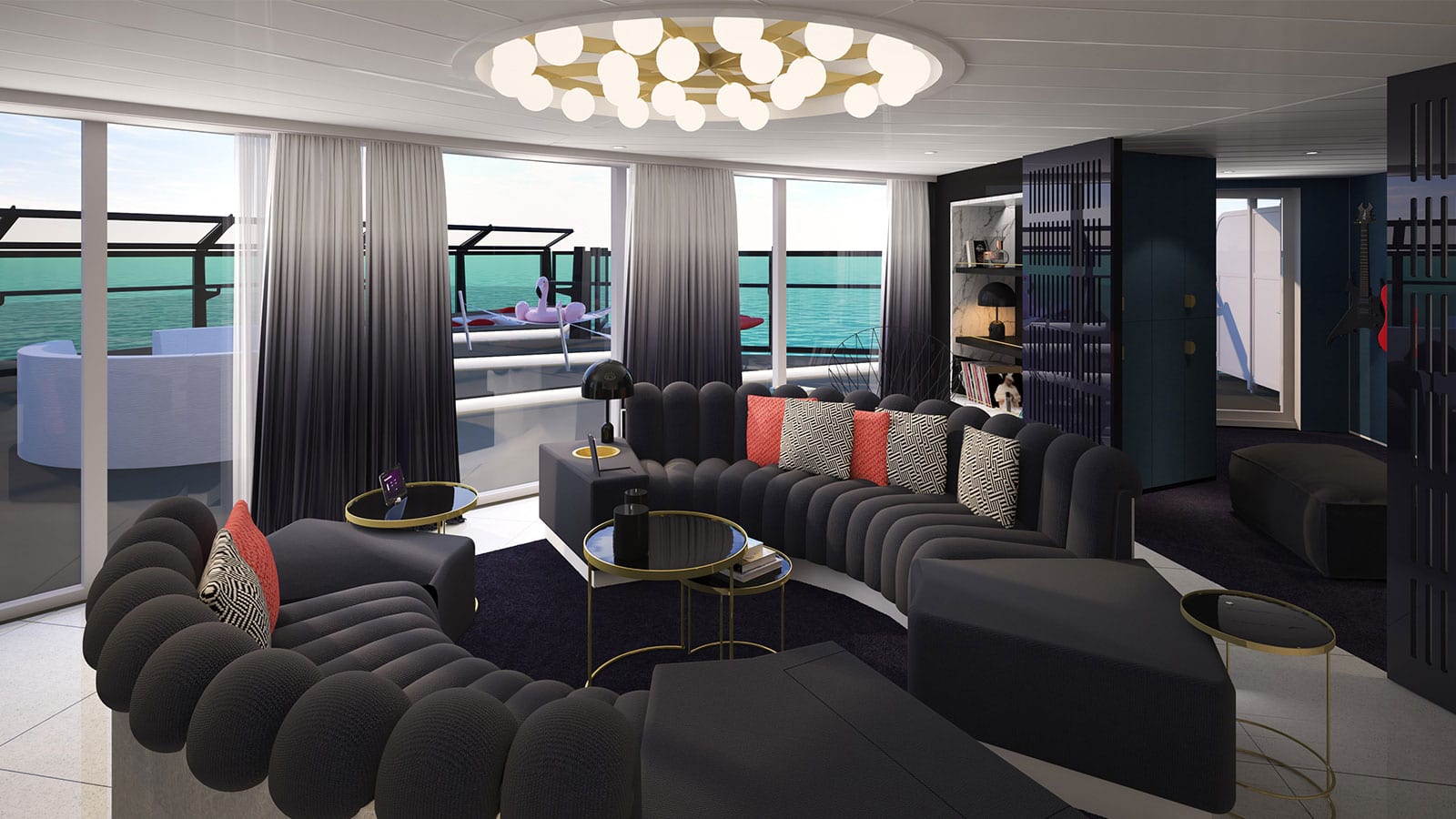 There are four types of cabin aboard Scarlet lady, from the Insider, to the Sea View, to the Sea Terrace and the ultimate RockStar Suites.

They all include WiFi, there’s 24-hour room service and they’re eco-friendly. Among the hi-tech functions to make life on board easy and enjoyable are automatic lights systems, temperature adjusters, 4K flat-screen 43in HDTVs, and mini-bars.

The Insider: for between one and four people, the Insider cabins (no ‘windows’) are still luxurious; they have mood lighting to enhance the cosy feel and roomy rain showers in the bathrooms.

The Sea View: A room with a (porthole) view for one to three people, they have super-large single beds and nautically-inspired window seats.

The Sea Terrace:  Glam and gorgeous, you can relax and gaze at the ocean while you sit at your table with a glass of wine, or chill on your terrace hammock. Designed for two to four people, double doors allow you to get a sweeping view of the horizon, while the mood lighting matches the light from the oncoming sunset. 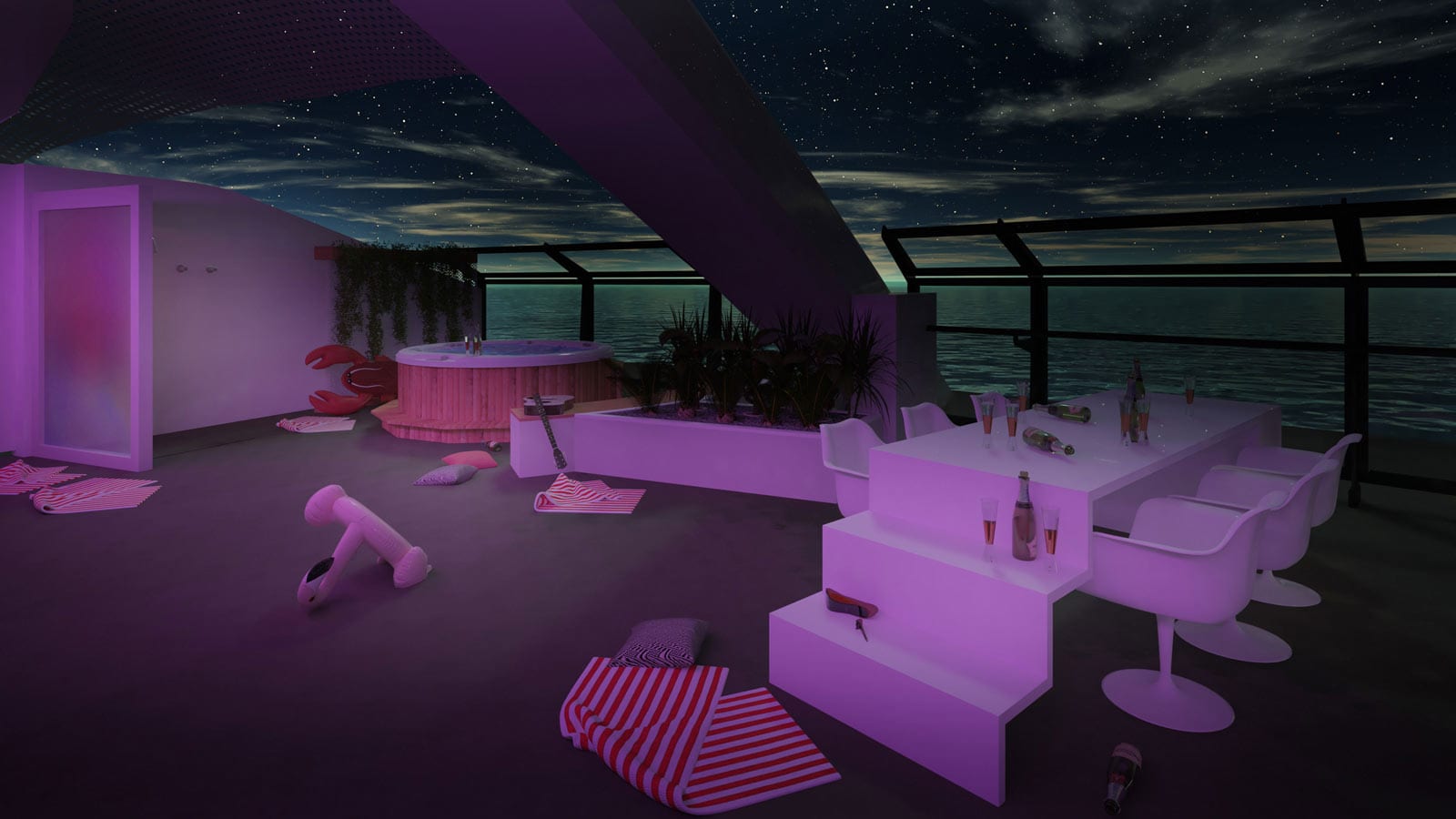 RockStar Suites: Stunning marble bathrooms, spacious stargazing terraces, champagne tables and exclusive treatment are yours in these VIP suites – there are 78 – designed by Tom Dixon.

Of course, there are also Mega RockStar Suites. This is the most exclusive, top-tier luxury living on board; granting prime access, 24/7 agent attention, and personal riders. They boast large marbled bathrooms with Peek-a-Boo showers, hand-woven terrace hammocks and outdoor Peek-a-View showers for when rinsing off requires a little help from the moonlight.

Where will I travel to? 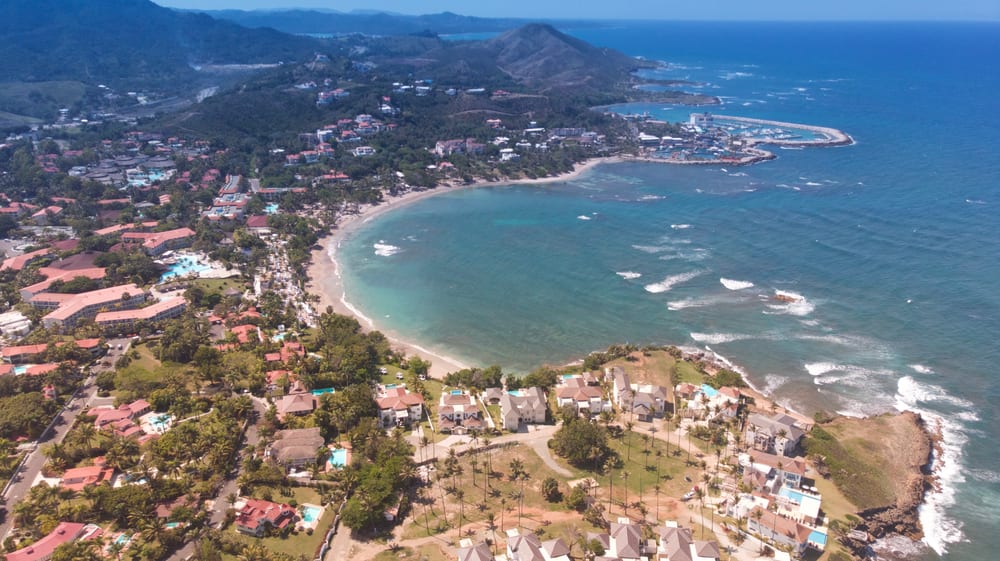 There are a number of differing length cruises to look forward to as Scarlet Lady travels around the Caribbean from the port of Miami.

From there you can explore the waterfalls of Puerto Plata (above), discover ancient ruins in Costa Maya or lose yourself in the famous sunsets of Key West.

You can venture to the stunning coral reefs of Cozumel (a gateway to Mexico’s hotspots like Tulum and Playa del Carmen), and get a welcome at Virgin Voyages’ private beach experience at Bimini, Bahamas.

How much will it cost? 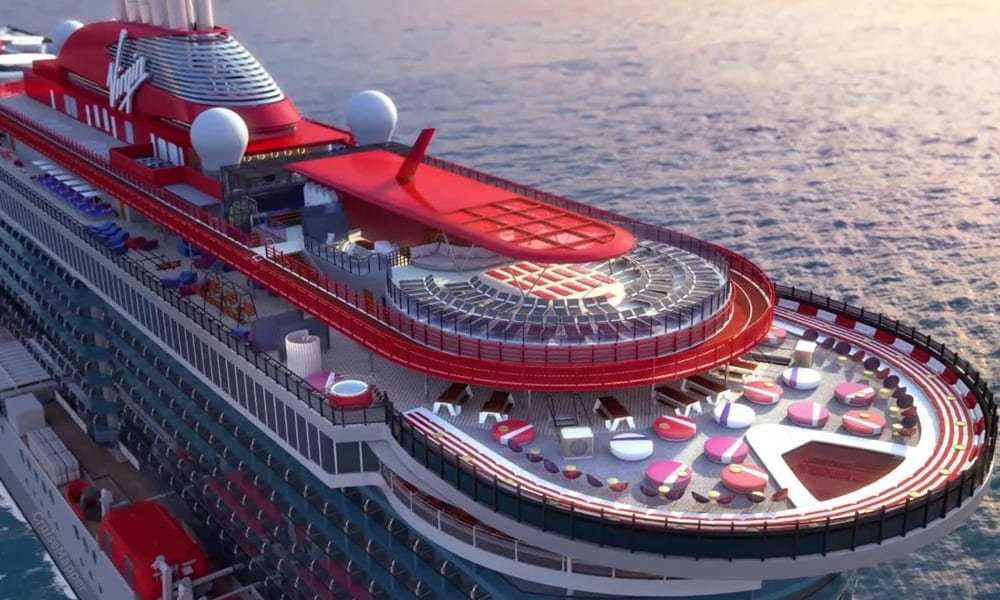 Prices currently start at around £640 per sailor – that’s for a five-night Riviera Maya Cruise taking in Miami, Cozumel – Playa del Carmen, The Beach Club at Bimini and then back to Miami, staying in an Insider cabin (two people sharing).

What about dining and drinking on board? 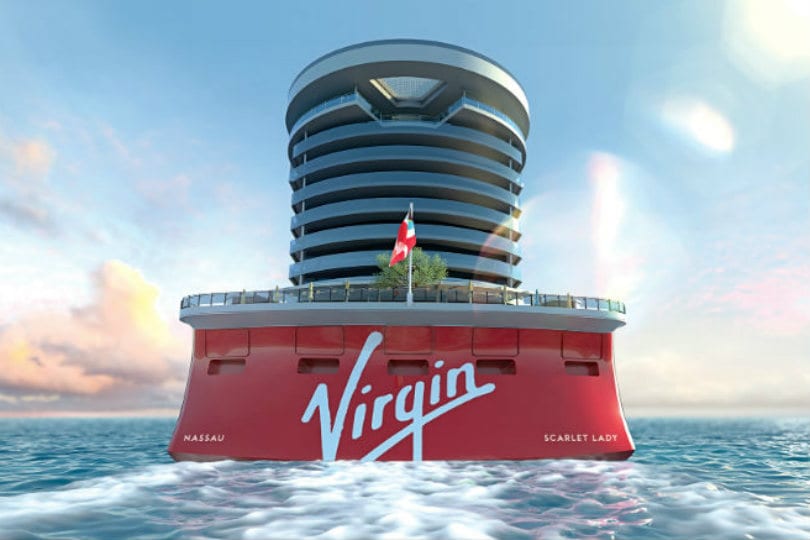 There are more than 20 restaurants on board, offering everything from a steakhouse (The Wake) and Korean BBQ (Gunbae Restaurant);  to drag brunches (where drag kings and drag queens perform while the audience feasts on typical brunch foods and drinks) and an international food market called The Galley.

Extra Virgin is an Italian restaurant, The Pizza Place a more casual pizzeria and The Test Kitchen is part cooking school, part restaurant where guests can learn as well as eat!

World-class chefs like Brad Farmerie (of PUBLIC in NYC) and Sohui Kim (of The Good Fork and Insa in NYC) are a few of the names behind the menus.

When it comes to drinks, Virgin has partnered with some of the industry’s most esteemed mixologists, from the Bar Lab and the Cocktail Cartel, to global bartending phenomenons like Charles Joly and Julia Momose, to offer, they say, quality drinks crafted with the best ingredients 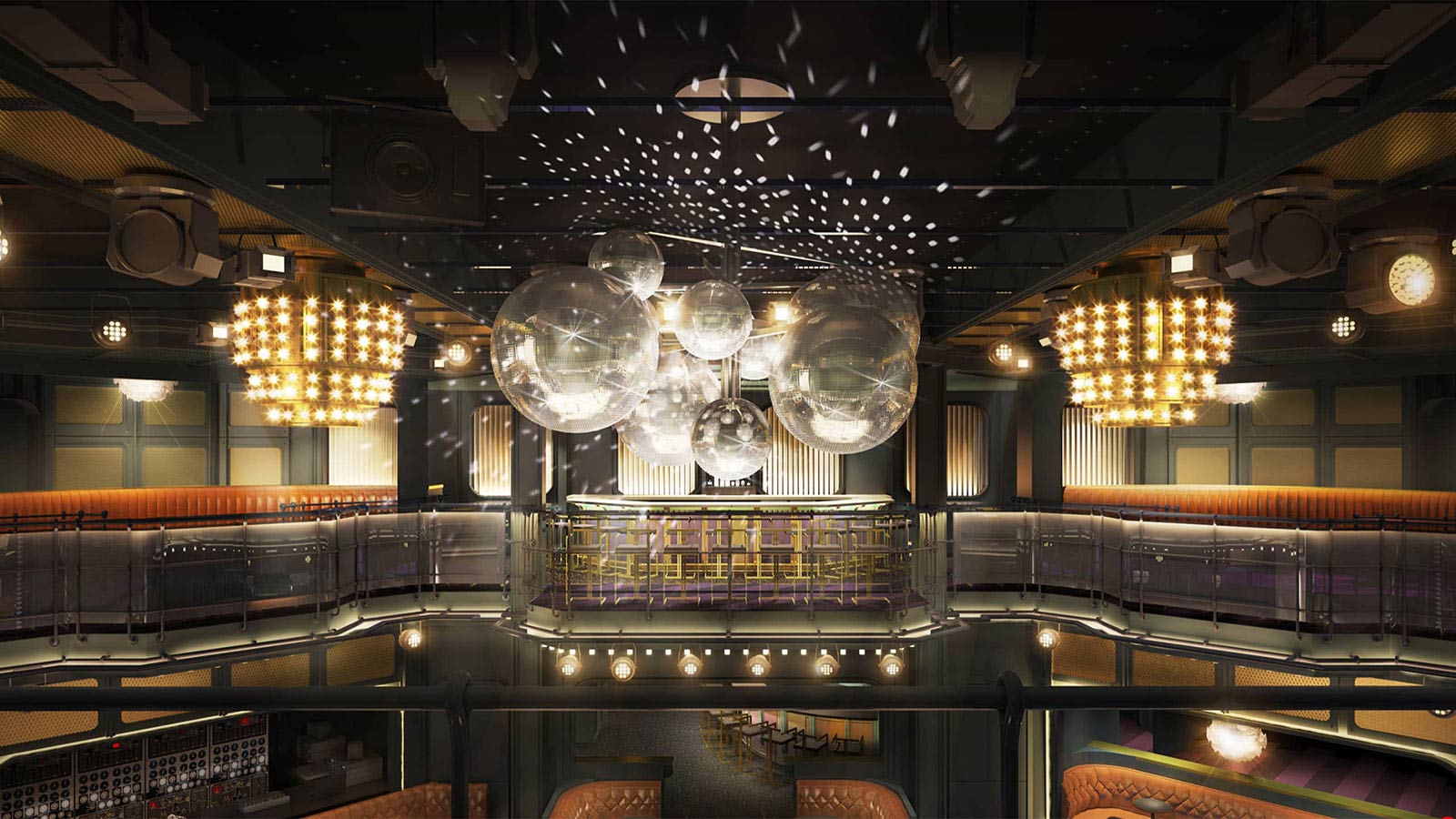 Scarlet Lady is swapping some of the traditional Broadway and cabaret style entertainment often offered on cruises for more contemporary productions and festival-like shows from world-class producers, directors, choreographers and artists, including:

Duel Reality by The 7 Fingers, a retelling of Romeo and Juliet with an elaborate circus twist.

Ships in the Night – a contemporary dance production and,

The Creative Collective is charged with the task of delighting its audience and, with music being at the heart of Virgin’s DNA, that now includes DJ Mark Ronson who, with Diplo, is set to perform at The Beach Club at Bimini this year.

Other talent lined up to perform includes MK and Sofi Tukker. 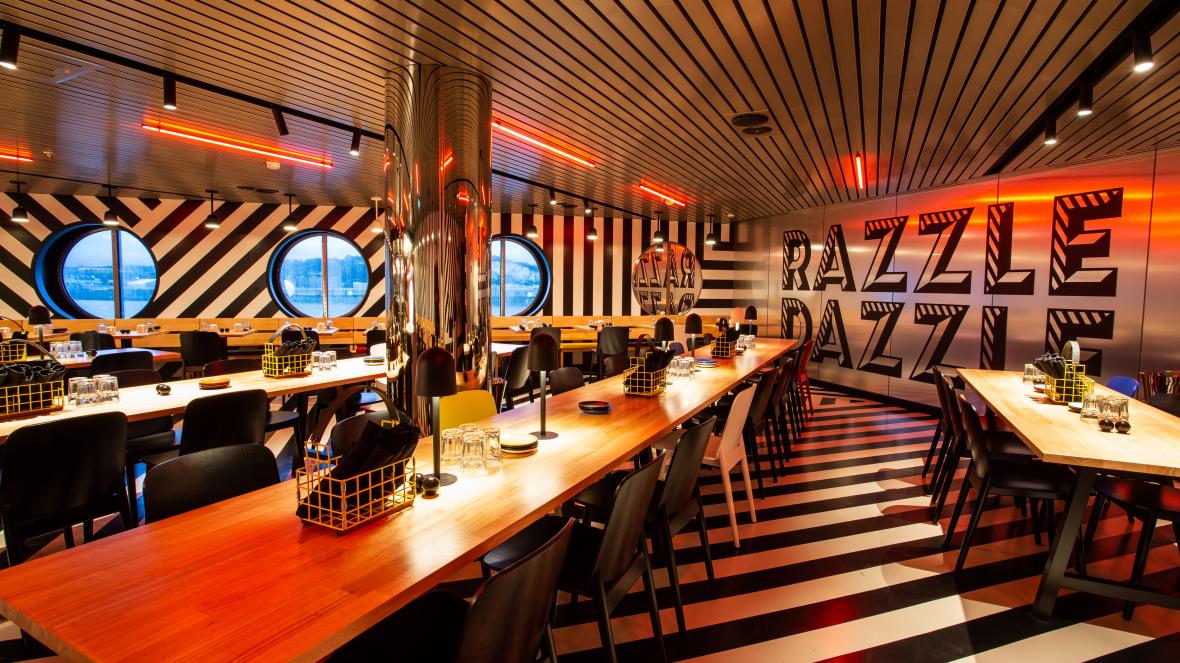 Must-see ‘venues’ to visit include:

The Manor – a two-storey, three bar space, named after Richard’s first recording studio with a sexy ‘70s, punk vibe. Ground-breaking shows will kick the night off before it transitions into a ‘mind-blowing’ nightclub.

Aquatic Club – A yacht-like pool deck for mornings spent sunbathing or for an evening dip.

The Beach Club – Virgin’s private beach club in Bimini, Bahamas, where you can spend mornings filled with meditation and slow-flow yoga, afternoons spent floating through clear, azure waters of the pool or enjoy an evening bonfire and DJ-led bash by the pool.

Anything else? What about keeping fit and healthy

Scarlet Lady has her own B-Complex Gym with weights and machines galore so you leave could stronger than when you arrived, yoga to balance your chi, and cycling classes – there’s even an indoor running track.

The Athletic Club has everything from sun-rise yoga to outdoor boxing, meditation to HIIT workouts, and even offers specifically curated hikes at the ports. If you just want to sweat it out and take a run, there’s an outdoor jogging track called The Runway.

The luxury Redemption Spa is the place for a variety of treatments from hot stone massage, mud therapies, saunas and seaweed wraps.

And, to cap it all Scarlet Lady has her very own tattoo parlour, The Squid Ink Parlour, offering tattoos, permanent make up and piercings.

Find out more abut Virgin Voyages on the website here. 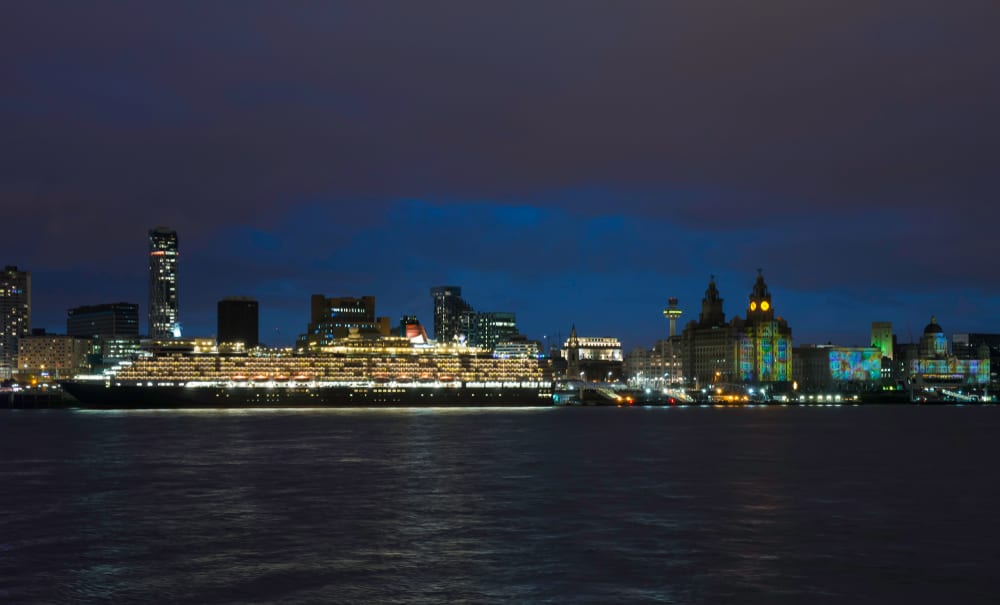 Who is next to the city?

Cruise Liverpool is the city’s £19 million terminal, created to allow vessels of 345 metres (1,132 ft) to visit the city without entering the closed dock system or berthing mid-river and tendering passengers to shore.

It was opened in September 2007 when the Queen Elizabeth 2 arrived in the city, and has now welcomed more than 500 cruise ships carrying in excess of one million international
passengers and crew and generated £72m to the local economy.

The next five years will see Liverpool Cruise Terminal undergo an extensive transformation, relocating to the Princes Jetty at Princes Parade allowing it to accommodate 3,600 embarking passengers at any one time.

But that doesn’t mean it’s taking it easy till then, with a host of vessels set to sail into the city in 2020.

Over the next couple of months alone it is set to welcome several ships – and a very important one this Friday, HMS Prince of Wales!

Find out more about Cruise Liverpool on the website here.

Fred Olsen’s ‘Black Watch’ will visit five times between March 26 and April 28 with up to 868 on board.

Then, in May, Celebrity Cruises’ Celebrity Reflection will drop anchor twice – May 7 and 10 – with up to 3,000 passengers and half as many crew. Paying a visit in between is Viking Ocean Cruises’ Viking Sun, with up to 930 travellers on board with 480 crew, on May 8; and Princess Cruises’ Regal Princess with up to 4,098 on board, and 1,346 crew members, on May 9. 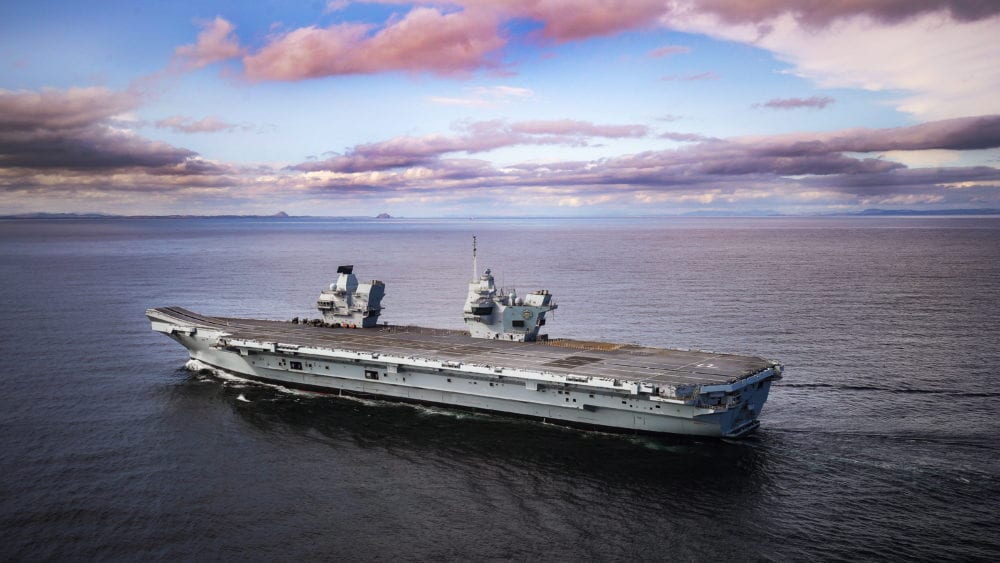 Thousands are expected to go aboard the HMS Prince of Wales when she arrives this Friday (February 28) to commemorate the naval service’s close ties with the city.

The second of the Royal Navy’s giant new aircraft carriers, the 65,000-tonne vessel will be in the city for a week of celebrations.

Nearly 13,000 free tickets for 50 sessions to go on board on Saturday, February 29 and Sunday, March 1, were issued online more than a week ago.

With all tickets taken, organisers are urging those with unwanted tickets to return them in a bid to fulfil requests from people who weren’t lucky enough to get them initially, but people will still be able to view HMS Prince of Wales at the Cruise Liverpool Terminal.

Commander Gareth Mawdsley, 41 from Liverpool, is the Commander of Logistics on board HMS Prince of Wales. He said: “Having grown up in Liverpool it is always special to be able to sail back along the Mersey, and I have been lucky enough to do so in several ships before.

“But being able to bring the largest ship in the Royal Navy fleet into my home port is fantastic. The city is always welcoming to visitors, and mariners in particular, so I am delighted we have the opportunity to return the hospitality.

“This aircraft carrier, like her sister ship HMS Queen Elizabeth, is vital to the work we do in the Royal Navy to help keep Britain safe. I would encourage everyone to come and take a look at us while we are here.”

MORE - Global Scouse Day 2020: Everything you need to know