Friends team up to buy popular south Liverpool cafe which closed in lockdown - The Guide Liverpool
Contact Us Advertise with The Guide Our Video Services Follow us:

When their favourite family coffee shop closed for good during lockdown, friends Sean Gleeson and Liz Wilson were sorry to lose the place they loved to take their children.

But instead of looking for somewhere new, they decided to team up and buy it.

Now the popular Wigwam on Rose Lane in Mossley Hill has been reborn as Little Peacock Coffee Shop and Sean and Liz are looking forward to not just saving a much-loved space, but bringing their own ideas to it too.

The pair, who met at a parents group picnic in Sefton Park, have already reopened for takeaway coffees and food and, restrictions permitting, they plan to host playgroups and pop-ups from April 12 then a full sit-in café from May 17. 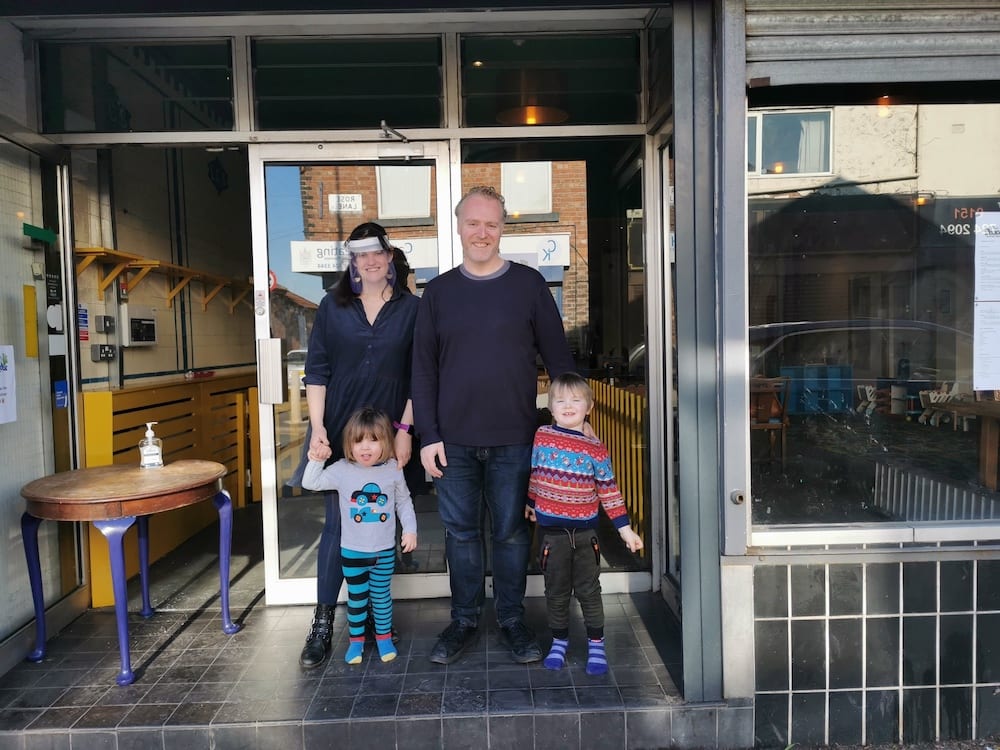 Sean and Liz with Xander and Teddy

“What we’re really hoping to do is make this a community hub where people know they can come and see friendly faces and we want to have interesting things going on not just for toddlers and babies,” says Sean.

“When we’re allowed to fully open we want to have things going on in the school holidays, after-school clubs for older kids, and we want eventually to be opening in the evening and doing things for grown-ups like book clubs and writers groups.”

Sean and Liz, who both live in south Liverpool, first became friends when their sons Xander and Teddy were babies – they’re now three-and-a-half and three.

“We met through an app called Mush which is like Tinder for babies!” says Sean. “It’s actually marketed as an app for mums but my wife was working and I was a stay-at-home dad so I went on and reached out to a few people.

“On the app they suggested having a picnic so people could get together, so I thought I’d organise one in Sefton Park and Liz came along to that. We now have a group of a dozen of us who are very close and we used to meet up all the time at Wigwam because it was a perfect place to sit and relax and have a chat without worrying about losing your kid or having to crawl through soft play to find them.” 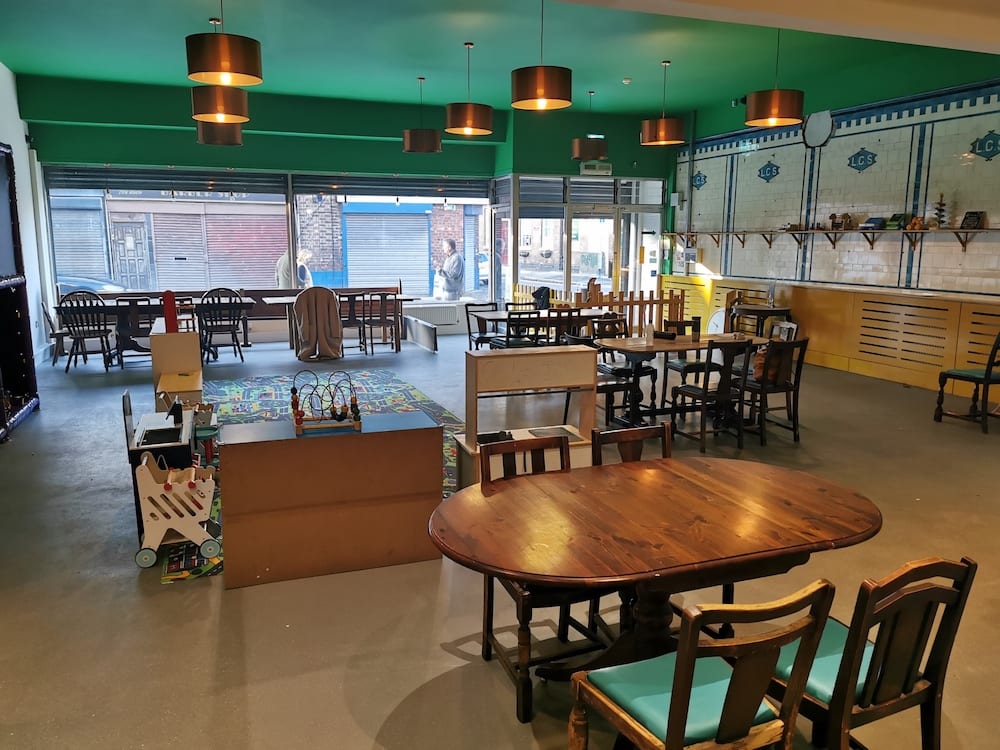 When the first lockdown came in March last year, Wigwam closed its doors but the mums and dads all hoped it would re-open in or after summer. But then a notice appeared on the window confirming its permanent closure.

“By then they’d missed a lot of time and I think they just decided that Wigwam had come to an end,” says Liz. “We spotted the sign up in the window saying it was closing and our first thought was we were just absolutely gutted. We thought, what are we going to do now? It’s so hard, especially with boisterous toddlers, just taking them to a regular coffee shop so Wigwam was pretty special in that respect. Then we thought about taking it on ourselves.”

Neither of them has any real hospitality experience, beyond having worked in pubs and cafes many years ago, but the seed of an idea just grew.

“It was something we’d talked about before when we’d been in here, going ‘can you imagine what we could do?’ ‘I’d do this …’” says Sean.

“We’d said it so many times messing around and then when it was a possibility our first reaction was ‘we can’t do that can we?’ and then we thought maybe we could.  And we realised that if it wasn’t us who did something, it might be someone who’d take the space for something completely different and then this resource for parents and families would just be gone.”

So Little Peacock Coffee Shop became a reality and, instead of looking at Covid restrictions as a hurdle, they treated them as an opportunity for a dry-run at their first venture together. 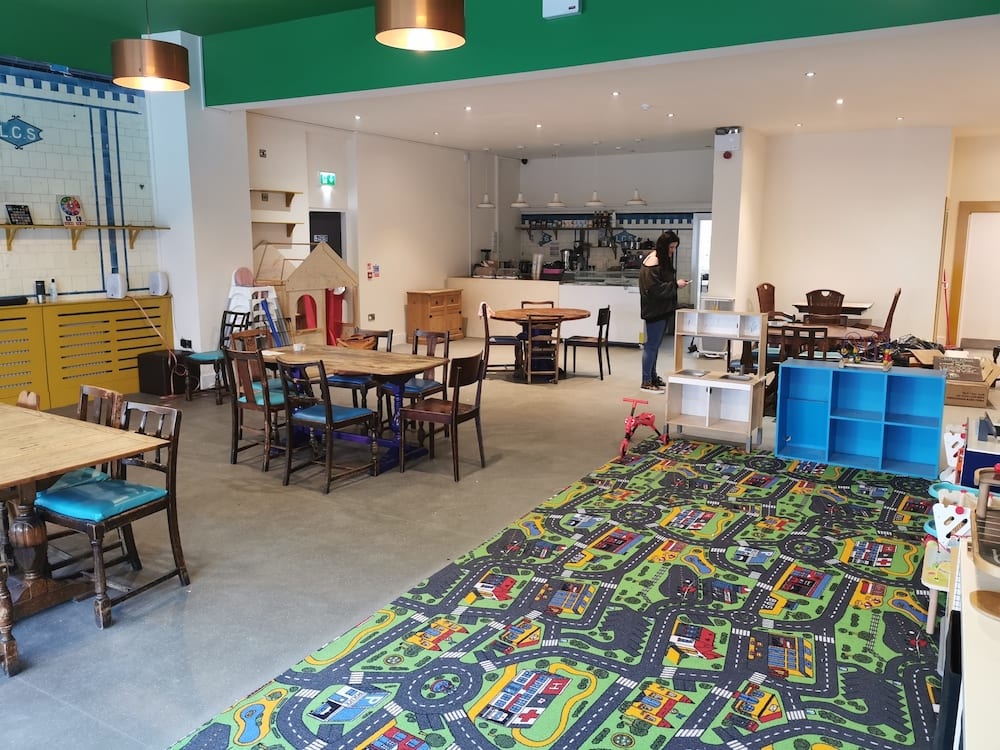 “These first weeks have given us a chance to smooth out any issues, and we’ve managed to keep on two of the previous managers and the chef which is brilliant because they all know what they’re doing so that’s been a huge help to us,” says Liz.

They’ve already got plans to introduce new elements to the space, like a sensory room, reading corner and dedicated baby area. Their friend Linzi is going to be setting up a mini kids hair salon in there and they’ve been canvassing friends on social media to find out what they’d like to see.

“We got so many replies and suggestions, and people have been telling us they can’t wait for us to open fully – some of them have been here when it was Wigwam and now they’ve had another child during lockdown so they’re really keen to have somewhere like this to go to,” says Sean.

The pair both have supportive partners and other children – Liz has a 12-year-old daughter Eva and Sean has an eight-month-old baby Jack.

And the two boys who brought them together are playing their part too.

“While we’ve been doing the work and organising everything, Xander and Teddy have been coming in every Monday and running round and playing and trying out all the new toys so they’ve been like our little market research team!” laughs Sean.