Helping kick poverty into touch: footie players running marathon to raise cash for Liverpool foodbanks - The Guide Liverpool
Contact Us Advertise with The Guide Our Video Services Follow us:

A post-Christmas beer-belly blitz has led four footie players in Liverpool to embark on an epic running marathon for charity.

The four – three brothers and a friend – from Kirkdale, plan to cover 200km in 30 days to raise money for Fans Supporting Foodbanks.

And they’ve already gone way past their original £200 target – with more than £1,400 in the bank already.

One of the runners, Josh Cavanagh, says: “It’s just blown up, it’s incredible to have raised so much already and now we just want to collect as much as possible.

“With people furloughed and those who’ve lost jobs in the pandemic, more and more people are using foodbanks than ever before, and we know that the money we get will go to help people in our community.

“So that feels good.”

MORE - How to get cultural in Liverpool during lockdown

The four runners are Josh, 21, who works in traffic management for BT and Scottish Power; his plumber brother Callum, 22; older brother Stephen, a 30-year-old taxi driver, and their mate, Johny Brannigan, 21, and an electrician.

Josh says the four, who play football together in Clubmoor every Sunday, came up with the idea around the end of December.

“We’ve played football together for years but, after Christmas, we all had a bit of a beer belly to lose, so we decided to start running,” he explains. 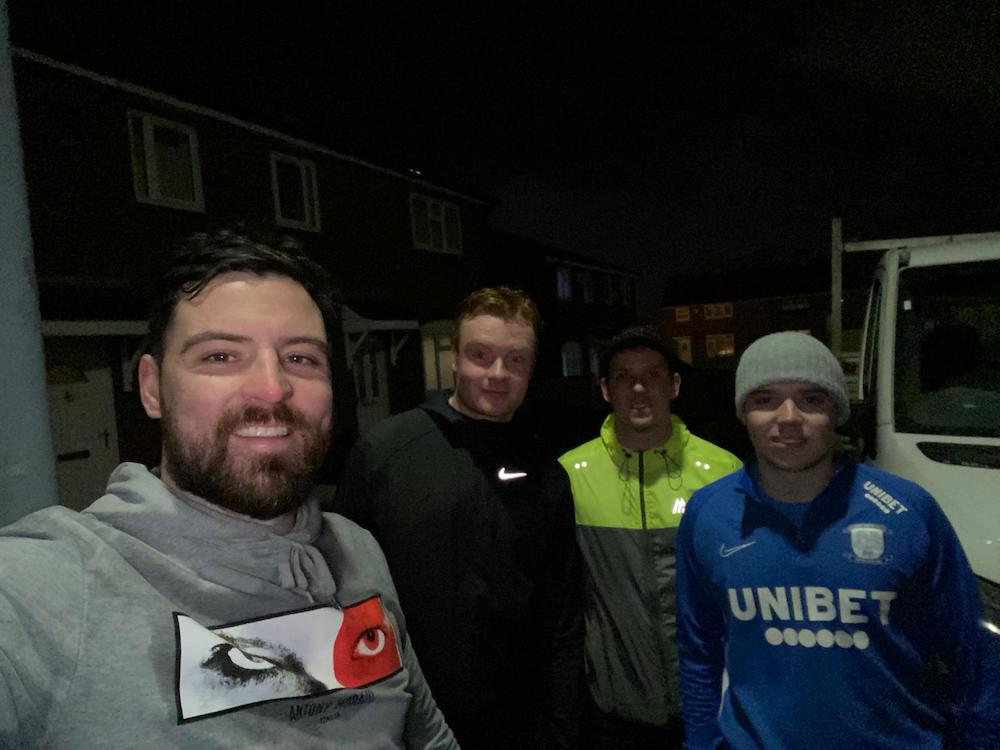 “We really enjoyed it but we thought that maybe we could get a bit more out of it and wanted to see if we could push ourselves and test our mental strength as well as our physical.”

The lads hit on the idea of 200km in 30 days, starting on Monday, January 18, and it was Callum’s idea to set up a GoFundMe account and raise money for Fans Supporting Foodbanks.

Josh adds: “When we play football on Sundays – it’s a team just full of the lads – we often have collections for them.

“We reckoned that people who we all know may be relying on foodbanks without telling anyone. This way we, and people who donate money, will be helping others in our community with food, toiletries, gas, electricity and more.”

Fans Supporting Foodbanks is an initiative set up by Reds and Blues supporters, to get food and other help to those who are struggling with poverty.

The four lads have a schedule worked out with runs of between 6km and 12km and rest days in between.

“The idea is that we run 50km each week to get to the 200km. We often run first-thing – we ran at 4.50am before work today – and go along the Dock Road down to Otterspool Prom and then back, finishing at the Titanic Hotel.

“We’ve had a few aches and pains, but a bit of stretching and yoga in between the runs is keeping us fresh, and it’s brilliant to know that so much is being raised which will go, not to some big national charity, but to people in our community.

“The support has been brilliant, so let’s see what we can get to before we finish.”

And have the beer bellies gone? Josh laughs: “They’re a work in progress!”

You can donate and support the lads here.