How a sculptor created two huge heads which will star in Brazilica parade - The Guide Liverpool
Contact Us Advertise with The Guide Our Video Services Follow us:

Brazilica, the largest Brazilian festival in the UK, returns to Liverpool on Saturday 6 August

Chainsaw sculpture artist Simon Archer is used to creating amazing works of art in wood but he’d never tackled anything quite like a commission from Liverpool’s Brazilica carnival.

Organisers of the parade, which will fill the city centre streets with samba on Saturday, wanted him to sculpt two huge heads representing gods in the Candomblé religion popular in Brazil.

Simon, from Formby, spent four days tackling giant polystyrene blocks, transforming them into what will be a stunning traditional showpiece for the carnival.

He says the pair, a male and female, were his first ever work in polystyrene and quite a learning curve. 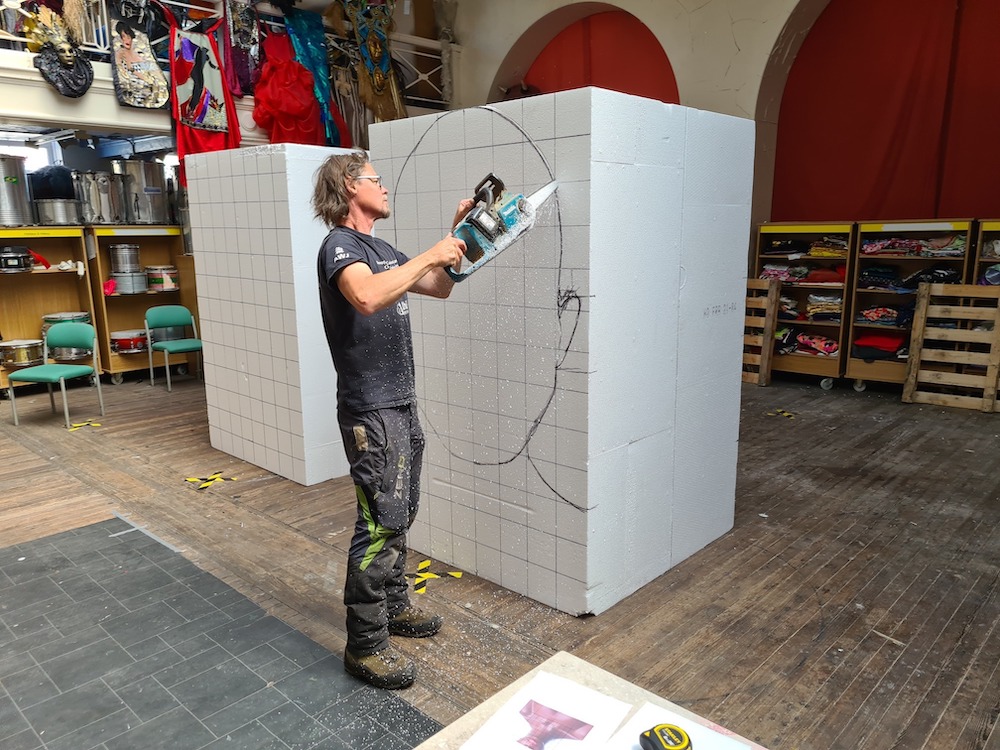 Simon starts on the sculptures

“This is the first time I’ve worked in polystyrene and it’s very different, it was definitely a bit of an eye-opener,” he admits. “A fellow sculptor in Canada is a wood chainsaw carver like me but he’s done a few projects in in polystyrene so I was picking his brains on what was the best method and I’m quite thankful I did to be honest. He warned me that the dust from the polystyrene can get sucked into petrol saws and wreck the engines so if I hadn’t spoken to him I could have ended up with a lot of downtime.

“But as soon as I started using the battery saw, it was still incredibly messy. Because of the static, it literally stuck to everything so after five minutes of carving and I was just absolutely covered in white. I was finding it in the house for months afterwards!”

Simon worked from the Liverpool Samba School workshop in Lodge Lane, using internet images of the deities to build up a 3D picture which could be transferred onto the models. 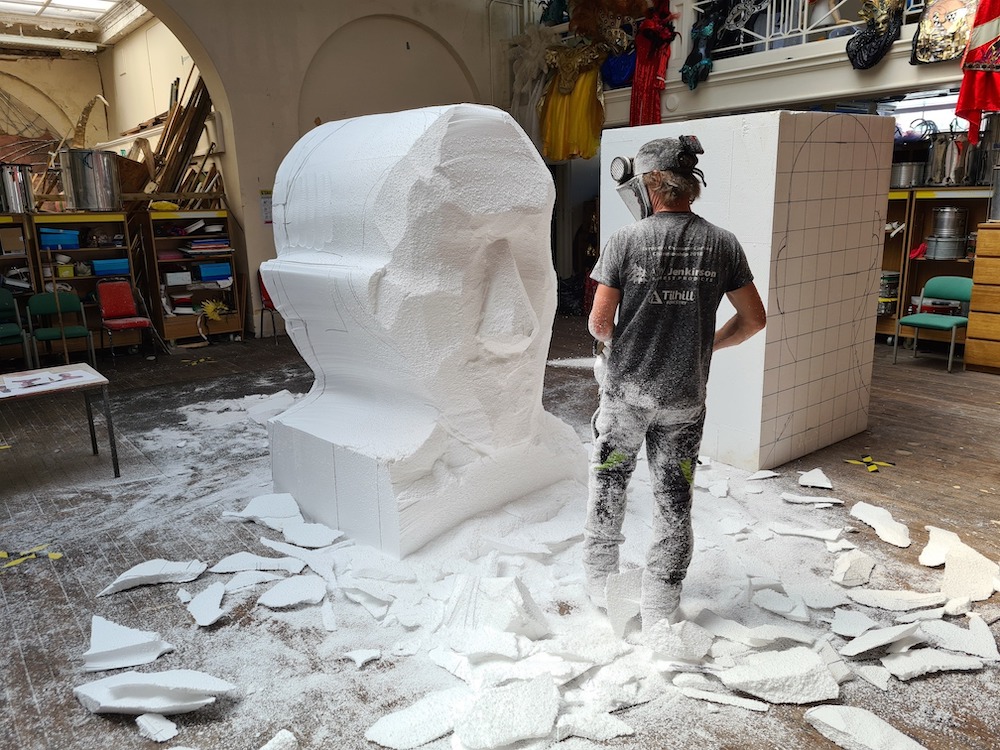 The sculptures start to take shape

“We started with four blocks which we glued together to make two which were about 8ft tall x 4ft wide x 4ft deep,” he explains. “I sketched out the lines we had to follow from the photos, and we used a long hot hire on a bow to slice through and remove as much waste as possible.

“That gave us basic profile shapes and then I used the chainsaw to add all the features and the detail of the faces.” 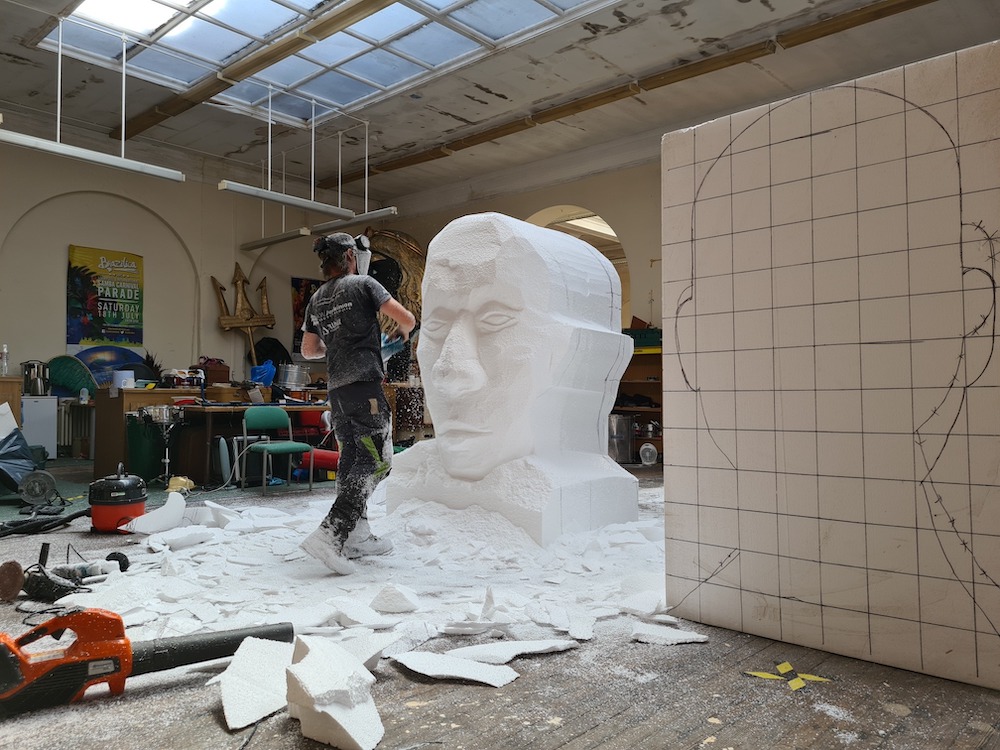 Carving the features of the sculpture

Once his two all-white head sculptures were finished, Simon handed them over to Liverpool-based artist Ron Bentley to paint them and really bring them to life.

The pair were completed last summer, in the hope that Brazilica 2021 would be able to go ahead. But when that had to be postponed, they were kept in storage at the Samba School until they were ready to be brought out and decorated for their starring role in this year’s celebration.

Carnival founder Maeve Morris says it will take around four or five people to lift them up onto floats on Saturday morning.

“You think they’re going to be light because obviously they’re polystyrene but they’re not hollow, they’re solid and quite dense, so they’re actually pretty heavy and difficult to move,” adds Simon. 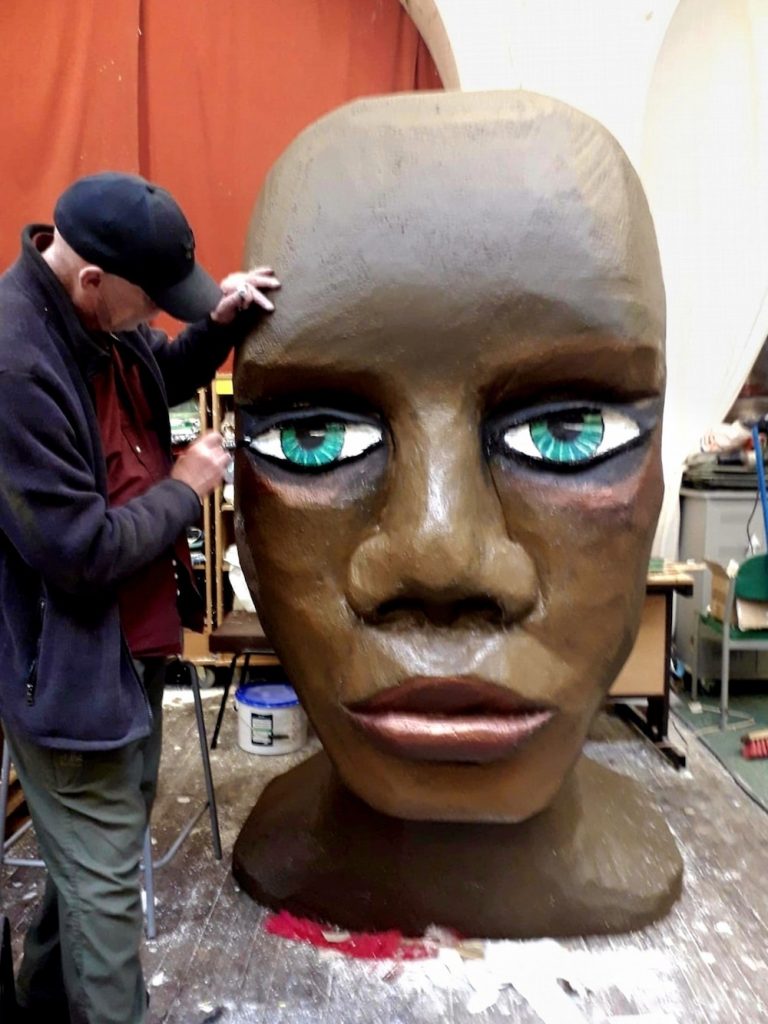 He’s planning to join crowds lining the streets on Saturday evening to see his artwork in all its glory.

“I do have some work on display in public spaces, but most are private commissions and I’ve never had any be part of a parade before so I’m looking forward to that.

“Brazilica is a fantastic community event so I was just really pleased to have been asked to be a part of it,”