How Prescot's Shakespeare North Playhouse has stayed on track despite Covid - The Guide Liverpool
Contact Us Advertise with The Guide Our Video Services Follow us:

The new Shakespeare North Playhouse in Prescot has taken a huge step forward through lockdown after not a single day’s work on site was lost due to Covid.

Construction was able to carry on throughout the summer, and now into the second lockdown, meaning the £28million project is still on its original schedule for a spring 2022 completion.

Giant girders and a skeleton of the replica Elizabethan theatre are clearly visible to passers-by as the ambitious design really begins to take shape.

Ian Tabbron, interim chief executive for the Playhouse, says the keys should be handed over in March/April 2022, with a big star-studded opening planned for September.

“That was always our schedule and I’m happy to say that at the moment Covid hasn’t caused any delays so we’re still on for that. Our construction didn’t stop at all, we’ve been able to keep going throughout. Partly that was down to luck because the nature of the building is that the early part of the construction involved single contractors being on site so we didn’t have the complexity of lots of different contractors and the difficulties of keeping them all safe in close proximity.

“We were pouring thousands of tons of concrete which meant there were very few people on site, just cranes and a few operators.

“Now we can actually stand on what’s going to be the stage and get a real sense of the size of the auditorium and imagine what it’s going to be like because what’s there is very substantial.”

Ian says the 350-seat Playhouse, which has been described as the third point in a ‘Bard triangle’ connecting London and Stratford-upon-Avon, will be one of the most exciting in the country in terms of proximity between audiences and performers. 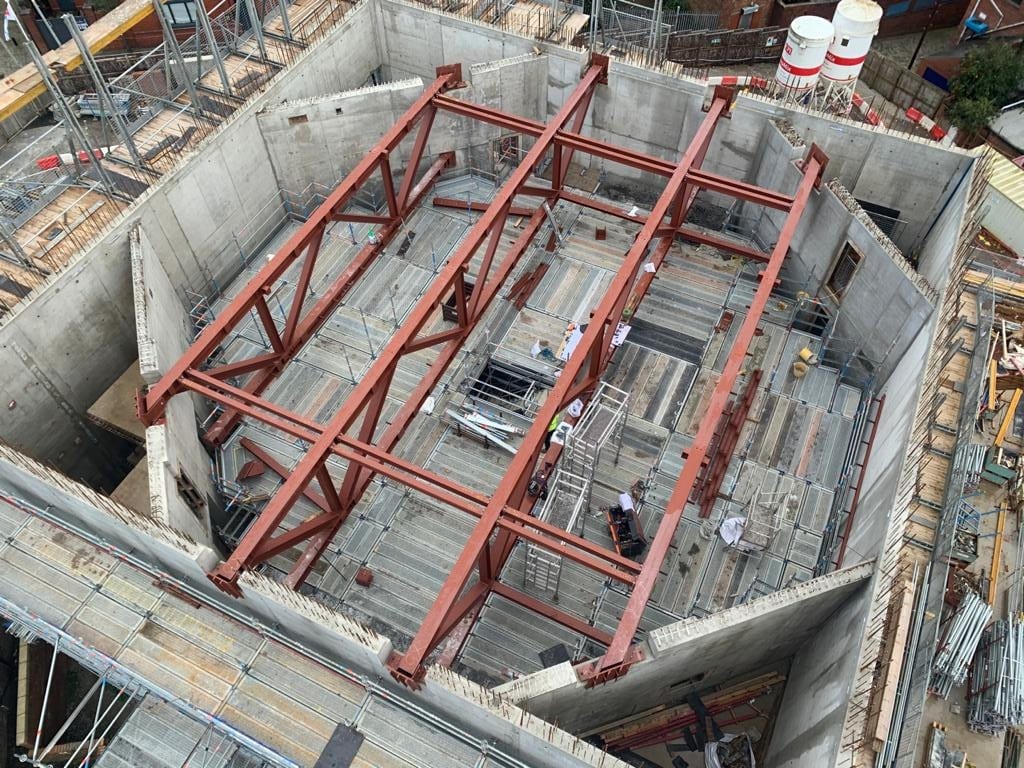 “It’s quite a small theatre, which makes it a very exciting space, so you’ll feel you can reach out and touch the actors. And we’ll have this wonderful oak auditorium with a calico ceiling in blue and gold, which is just gorgeous – it will be very very beautiful, a little palace.”

As progress continues hopefully through the second lockdown and into the New Year, all eyes are on February when McCurdy, the world’s leading authority on oak-framed buildings, will be bringing the auditorium up in pieces from Berkshire and assembling it in the middle of the concrete building.

“That’s going to be a big splash, because that’s the moment when, for me, it starts to become a real theatre rather than having to use our imagination,” says Ian.

In the meantime, it’s about gaining momentum around the project, and starting work with artistic and business partners to create the Shakespeare North company.

“It’s not just about the building, it’s about the activity,” he adds.  “Very importantly we’ve got Laura Collier on board now as our creative producer who is a nationally acclaimed theatre producer who has worked at the National and Battersea Arts Centre. So the actual theatre side is developing behind the scenes, that’s not stopped, at the same time as the building develops.”

The Playhouse is attracting more and more supporters too in the local community and further afield – from direct debit £5-a-month donations via its website, to substantial financial backing from the Ken Dodd Charitable Trust. It also has some big names like Dame Judi Dench and Danny Boyle lending their names and their practical help too.

“Dame Judi has been a massive supporter and she actually donated part of the set of Shakespeare In Love to us. We own that now, so we’ve used some of the oak timber in our own theatre and we’ll be upcycling what’s left for bar tops in our Shakespeare In Love bar.

“We’ve also most recently got Danny Boyle behind us. He has close links with Frank Cottrell-Boyce, they’re very good friends, and Frank contacted Danny for us and asked him to be a patron. Danny generously said yes and he’s giving us his time and his contacts which are really important.”

2020, with so many theatres forced to close their doors albeit temporarily, might not seem like the best time to build a new one, but Ian hopes it will be.

“I do know a lot friends and colleagues in theatre who’ve been suffering this year but we’re looking at it as coming out the end of the tunnel by 2022 when we open.

“We’re really hoping for our colleagues and ourselves that in the spring things will start to improve and by the end of 2021 we’ll be full steam ahead again.

“We’re very much social animals, we like to be with other people, and the whole idea of theatre is built on that – the shared experience of being entertained. I’m hoping that will kick in and people will want to safely get back to theatre as soon as they can.

“We’ll be like a little ray of hope because people are looking ahead to better times.”