How Speedo Mick's supporters are helping him get through his 2400-mile trek - The Guide Liverpool
Contact Us Advertise with The Guide Our Video Services Follow us:

He’s well over halfway on his epic Giving Back Tour, he’s shattered and his knees are aching, but Speedo Mick says the stories supporters are sharing on his walk are helping power him on to the finish.

Mick has already completed more than 1,500 miles of what’s now become an extended 2,400-mile walk across the UK and Ireland.

The aim is to give out up to £250,000 along the way through his charity, the Speedo Mick Foundation, to small charities that are making a massive difference in communities up and down the country.

But Mick says there’s actually been an incredible extra benefit from the trek, for him and for lots of the people who’ve come out to see him and walk alongside him. 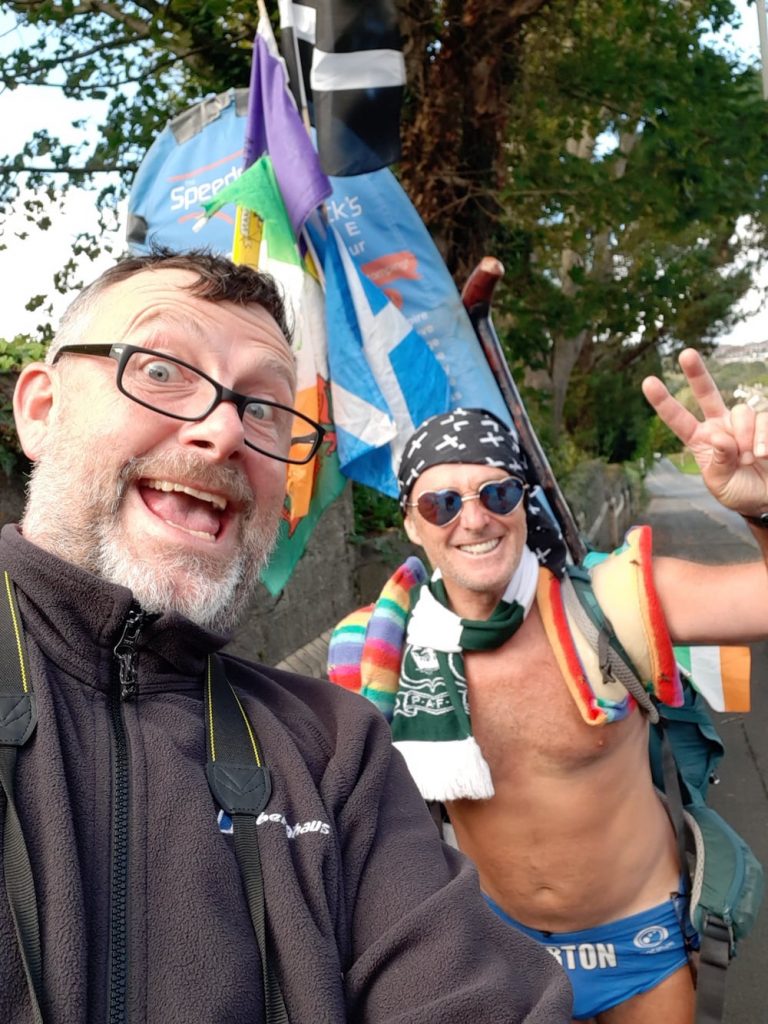 One of Speedo Mick’s supporters

“Walking so many miles every day would get very monotonous if I didn’t get stopped and honestly you wouldn’t believe the interactions I’ve had with people,” he says.

“I get people with mental health issues talking to me about their own experiences and getting honest about mental health because I’ve talked about mine and about being in recovery.

“I’ve talked about the mistakes I’ve made and how I’ve been able to face the future after making those mistakes and start again, and I get so many people coming over to me and sharing their stuff because of that.

“People are going through their own traumas, they walk with me for a little while and chat to me along the way, and that’s where the real connection’s made.”

MORE - Beyond the Fringe: Everything you need to know about this weekend’s new Liverpool festival

For Mick, having those kind of conversation every day has helped him keep stomping in his Speedos, collecting more money as he goes and giving out thousands from his previous walk.

It’s not easy, and there have been sacrifices which people don’t see.

“I’ve been on the road for four-and-a-half months now and I’ve only seen my beautiful wife twice on this walk which is hard. When she joined me, that was a big highlight for me. We’re on the phone every single night but we really miss each other. 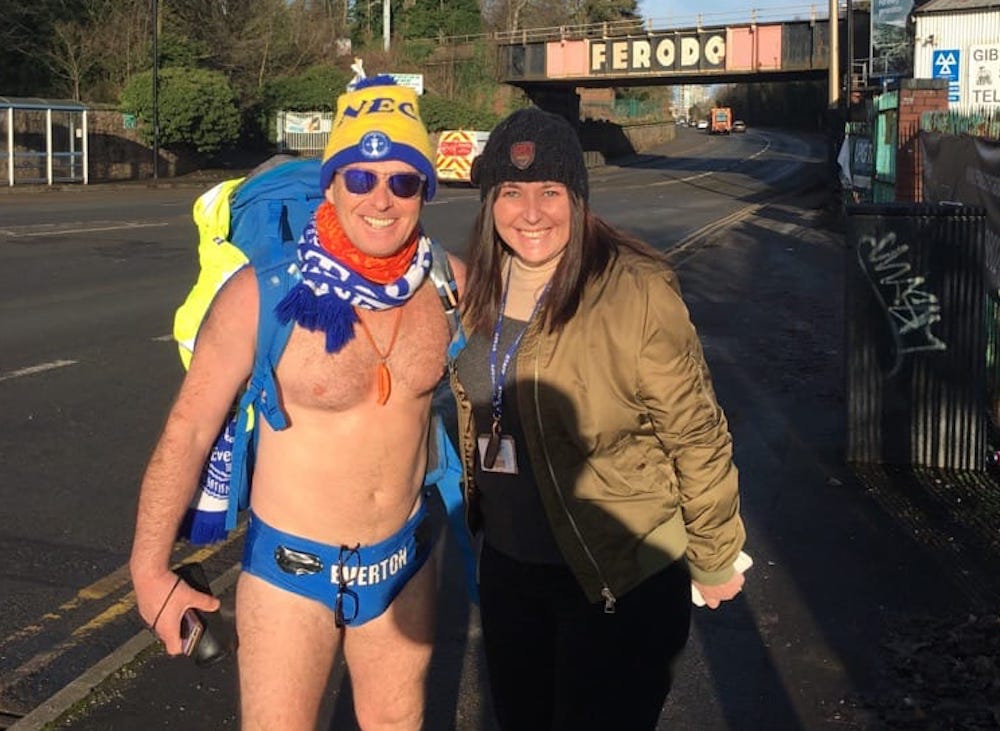 “There are some days when I’m tired and I just want to go home and see my wife and my family but then I see the fundraising total going up and that makes a massive difference.

“We’re over £85,000 now on this Giving Back Tour which is really phenomenal, especially when you remember that people have been putting a bob in the bucket for eight years, with me doing these walks and at the games I’ve been to.

“I’m not sure if people realise, but all that support has taken me in a really positive direction. The giving back stuff gives my life substance.” 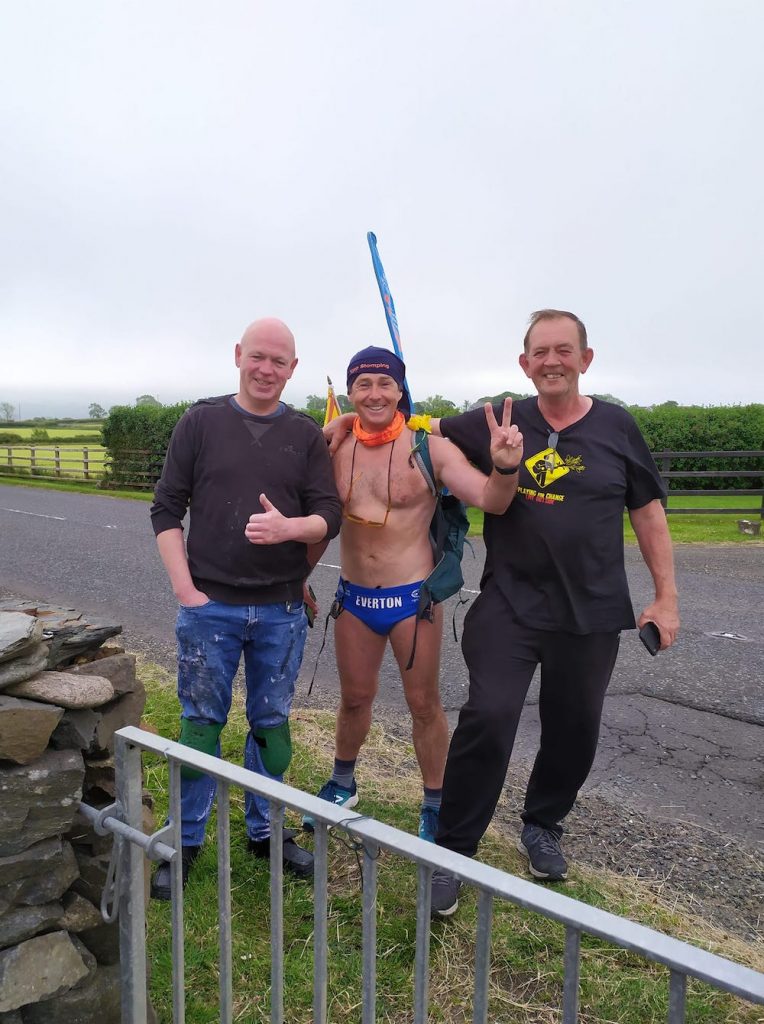 Mick had originally planned to walk 2,000 miles this time, but it’s gone up to 2,400 because he made a couple of alterations to the route.

He included Cornwall, where he finished his previous walk in February 2020, and a few other changes put the extra 400 miles on the total.

He admits he might have accidentally added a few more too.

“I have ended up walking in the wrong direction a few times and I hate walking round roundabouts, that can take me about an hour!” he jokes. “I come up to them and it’s pointing left on the road but then Google Maps is asking me to do a right – it’s confusing the hell out of me and I’m easily confused!”

As the trek goes on, Mick’s setting three alarms every morning to get him up and back out on the road.

Then it’s miles and miles to tackle, punctuated with selfies, chats and lots of thank-yous to people giving him money.

A cheeky few don’t just hand it over either … 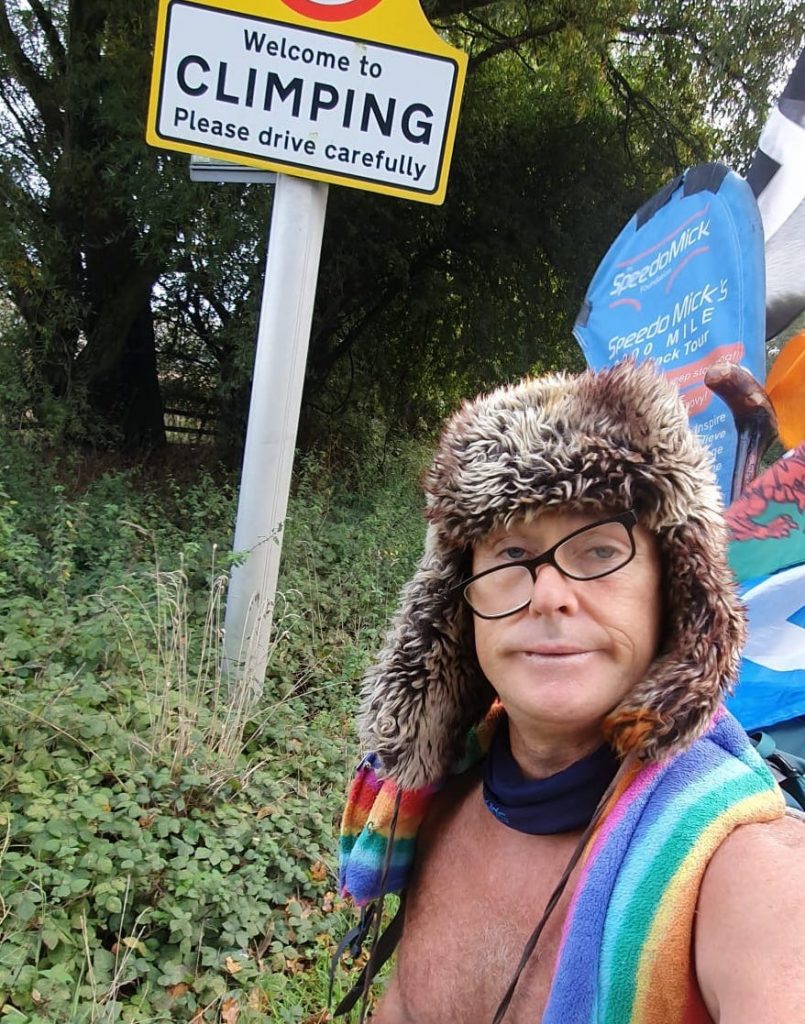 “They like to put it in my knickers!” he laughs. “Luckily I’ve always worn two pairs, just in case you get some silly Billy coming along trying to pull then down, so I get these ladies who put notes and coins in there.

“They’re dead funny, I don’t mind a bit of that, they’re just giggling and chuckling away.

“Some of them have just come over to say hello and then once they’ve seen someone else putting nickers in my knickers they get a couple of bob off their friend just so they can have a little rummage in my pants!”

To support Speedo Mick’s Giving Back Tour, go to the website here.