Knife Angel leaves Wirral after month-long stay at Birkenhead Park’s Grand Entrance - The Guide Liverpool
Contact Us Advertise with The Guide Our Video Services Follow us:

The iconic Knife Angel sculpture has now departed Wirral after a month-long stay at Birkenhead Park’s Grand Entrance but the legacy it leaves on the area is set to continue.

The Knife Angel is made from more than 100,000 weapons that had been surrendered as part of the knife amnesties co-ordinated by police forces across England and Wales.

It is designed to raise awareness and get people of all ages talking about the impact of knife crime and all forms of violence and aggression in our communities. 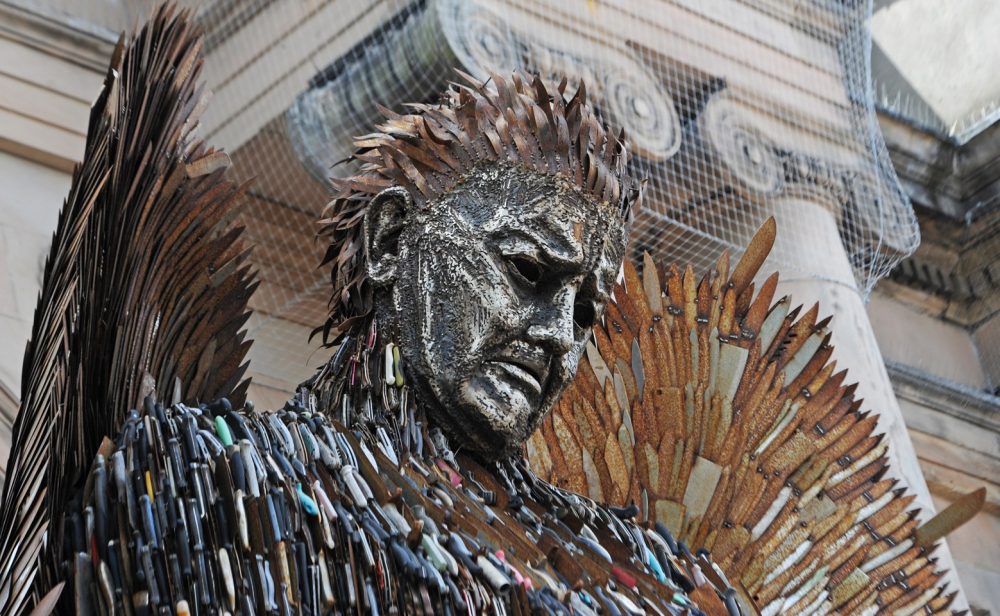 For the four weeks it has been in Wirral, it has certainly done that – and much more. Aside from the tens of thousands of visitors it received during July, Merseyside Police are also reporting a reduction of 54% in the number of offences involving a knife in July compared to the previous month.

Add to that the fact that 350 knives have been surrendered and taken off the streets of Merseyside over the course of July as part of a weapons amnesty launched on the back of the Knife Angel’s visit, it is clear the anti-violence message of the statue has resonated with local people.

“It has been a great privilege for Wirral Council to host the Knife Angel for the last month. I’d like to thank Alfie Bradley for creating such an iconic national symbol against violence and aggression; we have seen first-hand how it has stimulated conversations in households, classrooms and workplaces across our borough. Those conversations – and the many posts on social media – all help to spread the anti-violence message far and wide.

“It will move on to the next town now, but the legacy it leaves in Wirral will last a lot longer as so many people have reflected on the futility of violence and the tragedy and grief it causes.

“I’d like to say thank you and well done to community safety partners across the borough, who have joined together with a range of other organisations to deliver an outstanding programme of related events and activities to communicate what the Knife Angel stands for; from football tournaments in Beechwood and Leasowe, a candlelit vigil led by Tomorrow’s Women Wirral, sessions from Tranmere Rovers in the Community, multiple schools visits, a Community Day in Birkenhead Park or any number of youth diversionary sessions.” 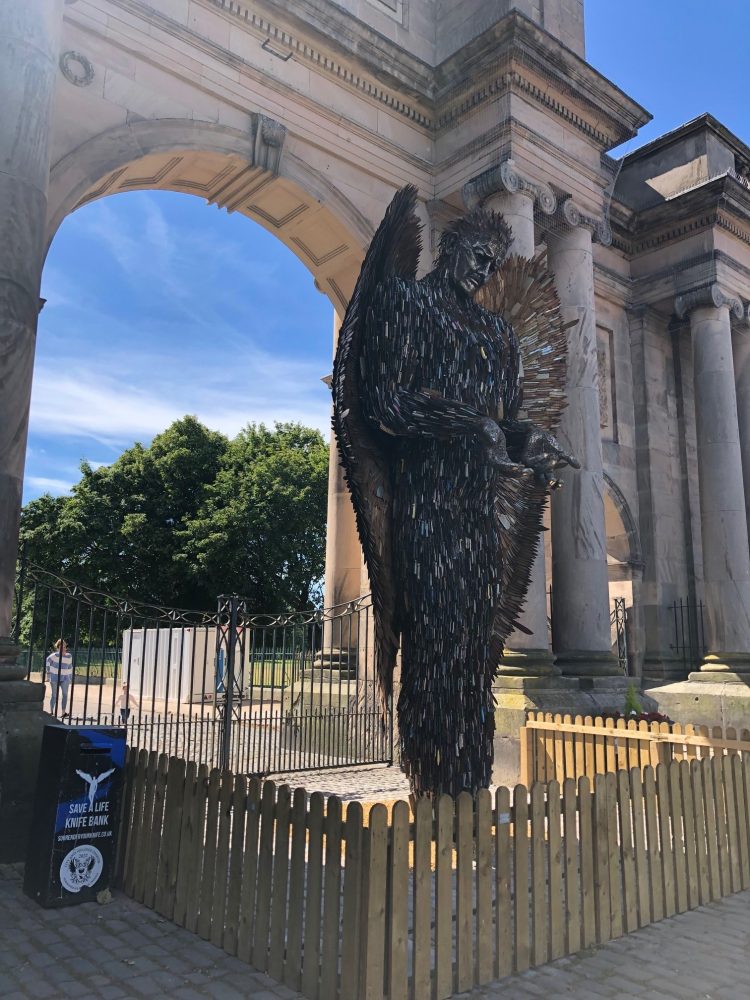 “For the last month, the Knife Angel’s presence in Birkenhead has been a catalyst for a real dialogue about the work we undertake to tackle the scourge of knife crime.

“It has also acted as a powerful call to action, inspiring a whole range of events and activities for people of all ages, but particularly young people focused on raising awareness of the dangers posed by knives, as well as helping to remove a large number of weapons from our streets.

“We all have a part to play in tackling knife crime – Government, councils, the police, communities, schools and individuals. I truly hope the conversations which are happening now will continue, so we can reduce the use of knives in our communities and prevent future tragedies.

“I’d like to thank Clive Knowles from the British Ironworks for making all of this possible and everyone at Wirral Council, Merseyside Police and all the community safety partners who made this campaign such a success.” 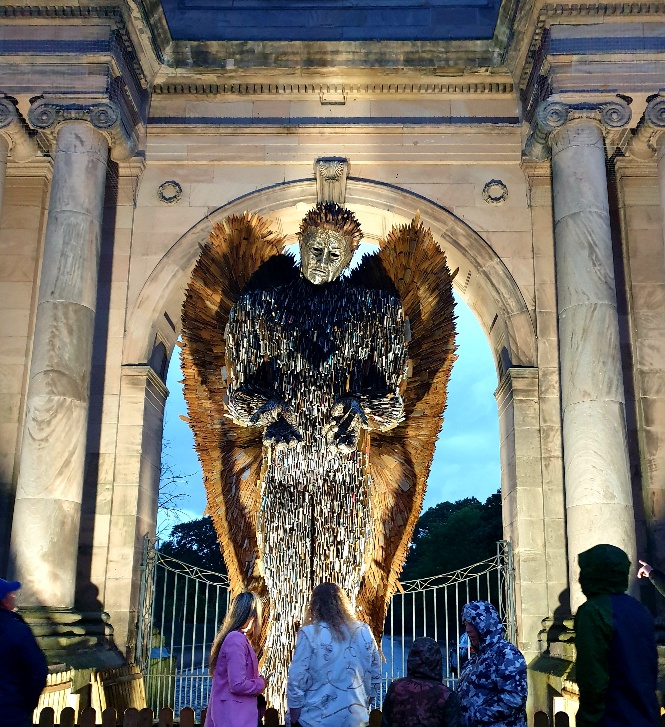 “We’ve had a fantastic month of activity around the Knife Angel in Birkenhead, working together with our partners across Wirral to raise awareness of the impact of knife crime in our communities.

“Throughout the month, hundreds of weapons have been surrendered at the amnesty bins we’ve placed across the borough, meaning that they can no longer be used to cause fear and harm in Merseyside as a result of this campaign.

“Together with the success of our amnesty bins we’ve also seen more than 80 youngsters participate in the Beechwood football tournament and had lots of positive engagement with schools who’ve visited the Knife Angel and had talks with our Safer Schools officers.

“Rest assured, all year round our officers are committed to tackling knife crime. We conduct open land searches, stop searches, targeted operations and high visibility patrols, as well as working closely with our communities, visiting schools and involving safeguarding partners.

“By collaborating with our partners, through fantastic initiatives such as the Knife Angel, we hope that we can work to educate our communities and make people think twice before picking up a knife.” 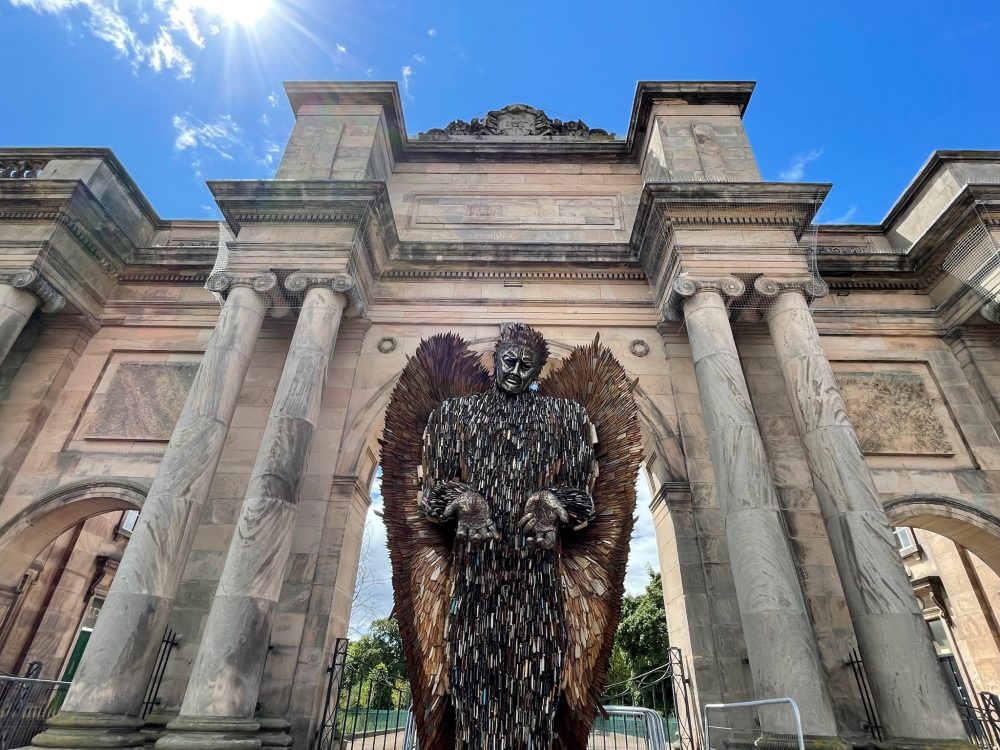 The Knife Angel was developed by the British Ironwork Centre in Oswestry and created by sculptor Alfie Bradley. It tours towns and cities around Britain raising awareness of the issues of knife crime and all forms of violence and aggression.

The British Ironwork Centre created the Knife Angel as a vehicle to voice the concerns of the nation, its communities, families, and the victims that have tragically bee n affected. The Knife Angel, under the ‘Save a Life, Surrender your Knife’ campaign, spearheads change and seeks to ensure there is more of a focus on early intervention, awareness raising and education throughout the UK.

The sculpture also encourages the surrender of knives and was constructed using weapons handed in to police forces as part of an amnesty appeal in 2015 and 2016. Surrender bins for the safe disposal of knives in Wirral were in place in a number of locations during July, including next to the sculpture itself at the Grand Entrance to Birkenhead Park.

Find out more about the Knife Angel here.