Liver Bird Street Artist Paul Curtis on creating art during lockdown and his plans for 2021 - The Guide Liverpool
Contact Us Advertise with The Guide Our Video Services Follow us:

Ever since he created the Liver Bird wings in the Baltic Triangle, Paul Curtis’s art works have become iconic tourist attractions in their own right, appearing on tens of thousands of Instagram photos every year.

He’s stopped counting exactly, but Paul Curtis reckons there must be at least 150 murals with his signature now on the walls of streets and businesses in and around the city.

So 2020 ends with a whimper. At least I was able to work so I count myself very lucky. Thanks for all the support and I wish you all a much much better 2021!

Thanks particularly to the listed in the comments.#paulcurtis #2020Ends #year #review #streetart #mural #newyear #art pic.twitter.com/4ogCfvmzz6

Even in 2020, when work came and went with Covid restrictions, he managed to add about another 50, including a massive tribute to Grand National legend Red Rum in Southport where the world-famous racehorse was trained.

“Because I’m classed as a tradesman, I carried on working after the first lockdown but for me 2020 took with one hand and gave with the other.

“A lot of people cancelled which is an occupational hazard for anyone who’s self-employed, and I was worried that if people were tightening budgets then maybe a mural wouldn’t be top of their list of things to get. But the flip-side was a lot of people reassessed their business so that actually led to more work.

“It was like the housing market – there was this pent-up demand so as soon as the restrictions were lifted I was flat-out, I could barely get a day off.” 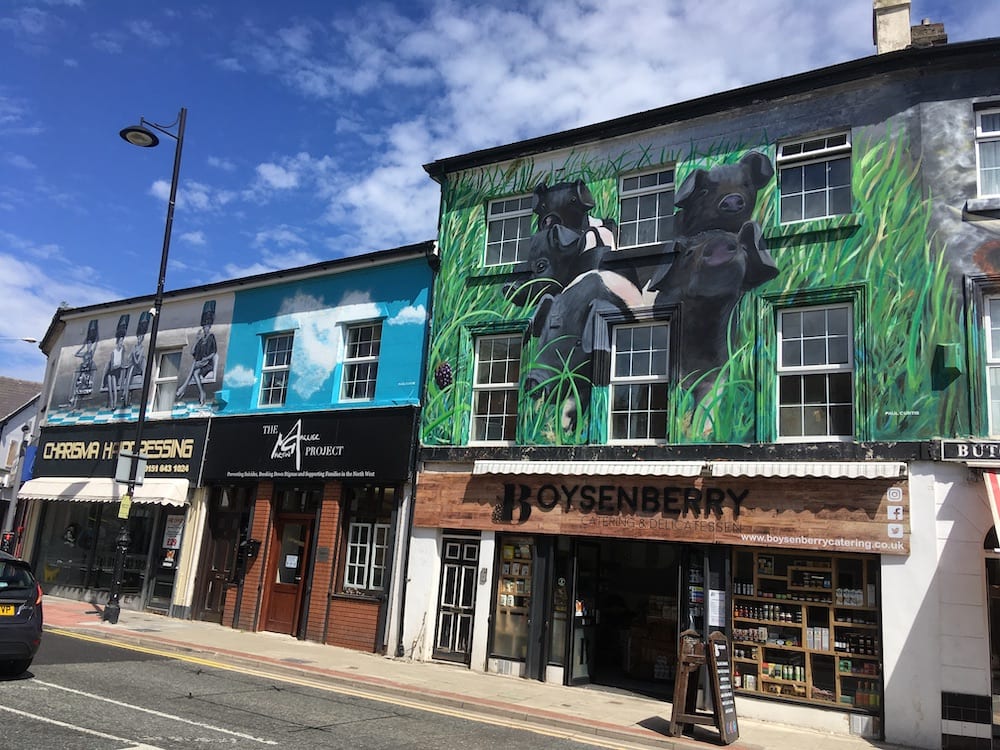 Although he’s legally allowed to work, 42-year-old Paul’s been more selective and careful about his projects for safety reasons.

And the cold weather has had to be factored in too – freezing temperatures and outdoor murals aren’t a great combination.

“From the clients’ point of view, they seem to always want outdoor stuff in January and indoor in August,” he laughs. “I do try and suggest they hold things back until summer, but when they’ve got an idea they’re so excited about getting it they want it yesterday.

“So I try to keep a mixture of indoor and outdoor during the winter and I’ve invested in a lot of thermals!

“The biggest problem with the freezing weather is the paint takes so long to dry if it’s below about six degrees, it seems to stay sticky for hours. I can go home and if it rains at midnight, and it’s still not fully dried, it washes off. It’s heart-breaking. 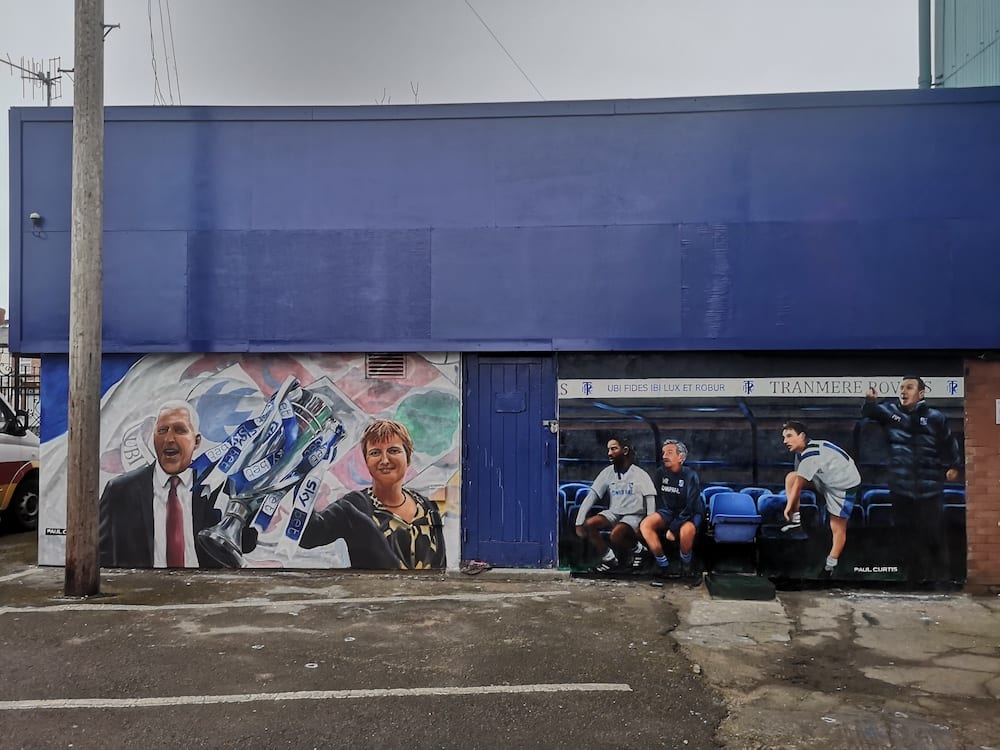 “The last one I did for Tranmere Rovers was a nightmare because that kept happening. I actually took the photos and went ‘it’s finished now’ and then came back the next day and it was gone.”

There are two new Prenton Park murals which Paul added in 2020, including an interactive one in the car park which fans will be able to enjoy as soon as matchdays are back to normal. The club has taken a bench from the dug-out and Paul has painted behind it with some of the players from the past like Pat Nevin and Ian Goodison.

“The idea is you sit and look like you’re on the bench with them,” he explains. “It’s meant to be for the kids but no doubt there’ll be a few dads who have a few beers and get on there!”

The Tranmere pair, Red Rum and a whole corridor of Peter Rabbit murals for Anfield Primary school have been Paul’s biggest projects over the past year.

Some jobs can take just a day, others can be three or four weeks depending on the detail and scale.

Happily, he says, he no longer gets so many requests to replicate the Liver Bird wings. “When I first did them in 2017, I was getting asked to do wings all the time but I think if I’d done them more than once it would have got really tiresome for everyone.

“If they were in all these bars, what would be the attraction of going to see the original? 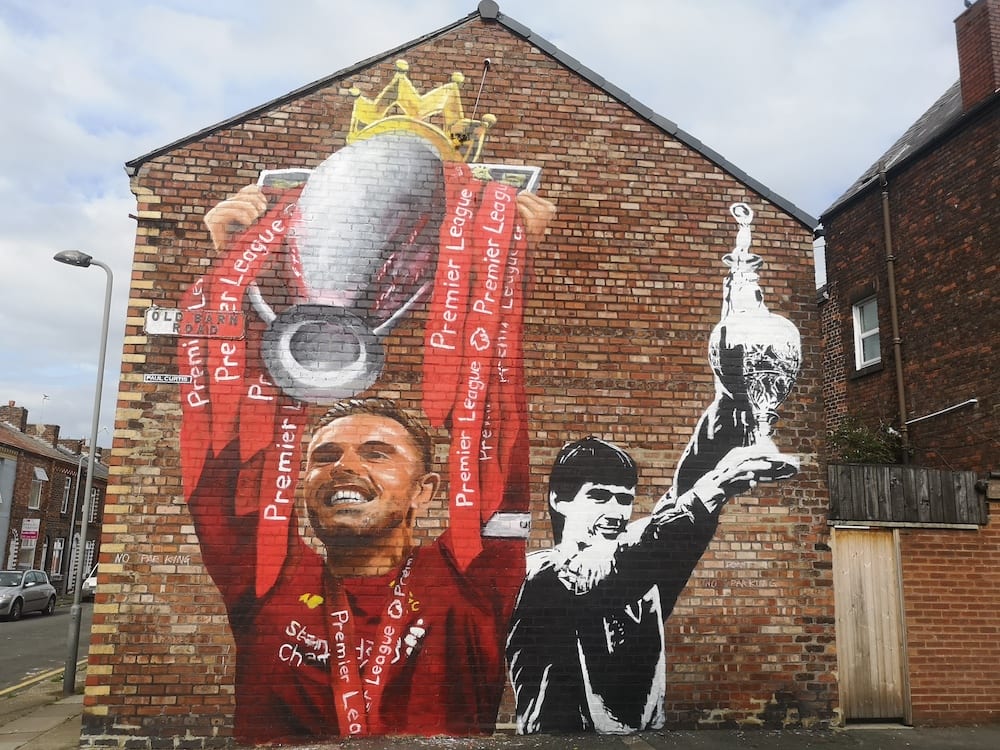 “So now I just go and touch up the one in Jamaica Street every now and then. It’s been graffiti-ed a couple of times so I just go and try and fix it quietly without too much fuss.”

Paul’s 2021 diary is already filling up with commissions including a piece for Liverpool ONE that he’s hoping to start soon, and phase two of a series of murals he’s done as part of the New Ferry regeneration.

He accepts not everyone’s a fan of street art, so he keeps that in mind when he chooses his themes.

“To me, it’s brightening up the area and we’d never do anything if we tried to please 100% of people, but I do bear in mind that everyone has to walk past it. 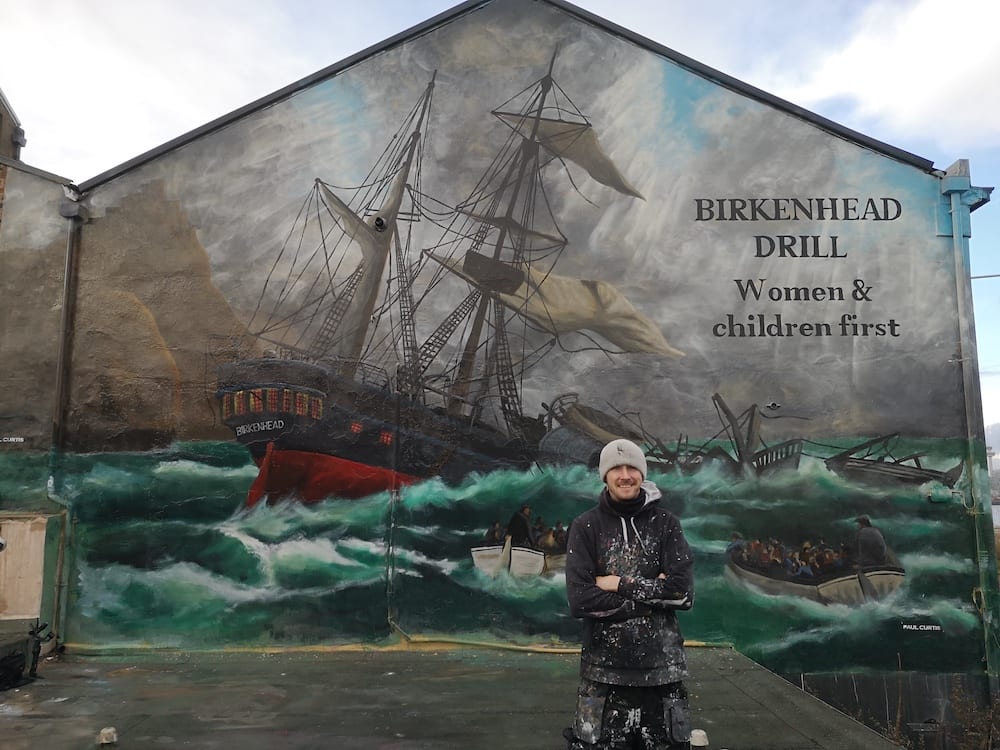 “None of my work is really pushing the boundaries of taste or politically divisive because I’m hoping people like it but even if it’s not their cup of tea I don’t want it to offend or upset them.

“When I’m looking for somewhere for a mural, I’m not so much looking at the building as the wall. If it’s a nice flat wall, in good nick and it doesn’t have any features. I wouldn’t want to paint on something architecturally significant, so I tend to look at the more dishevelled buildings.

“I want ones that are a bit unloved where by doing the work I’m improving it not destroying it. The art is the icing on it.”