Liverpool artist's tribute to 97th Hillsborough victim shared by fans worldwide - The Guide Liverpool
Contact Us Advertise with The Guide Our Video Services Follow us:

A painting by a Liverpool artist in tribute to Andrew Devine, the 97th victim of the Hillsborough tragedy, has been shared around the world.

Alan Murray was moved to create ‘And They Waited’ following Liverpool fan Andrew’s death last week, 32 years after he suffered life-changing injuries in the disaster.

The tiny canvas measures just 6in x 4in and only took Alan 45 minutes to complete, but it’s gone on to have a huge impact.

Painted in oils, the piece depicts Andrew – who was in his early 20s at the time of Hillsborough – climbing a staircase to heaven where the 96 are waiting for him.

“I heard about Andrew’s death on the radio and it was going through my mind about Hillsborough and I just got this feeling that I didn’t want him to be alone. The idea of that just bothered me but then I thought, he’s not on his own is he?

“I wanted to create a metaphor for it and then this image popped into my mind, and I remembered an old black and white film with David Niven, A Matter of Life and Death, where there was a big stairway going to heaven in it.

“Sometimes as an artist you see half a painting in your mind, or a quarter of a painting, but this one just went bang and the whole painting was there in my head.

“So I just did the staircase and painted him in, this little forlorn character with his bag and his trackie top on, and the crowd just appeared. 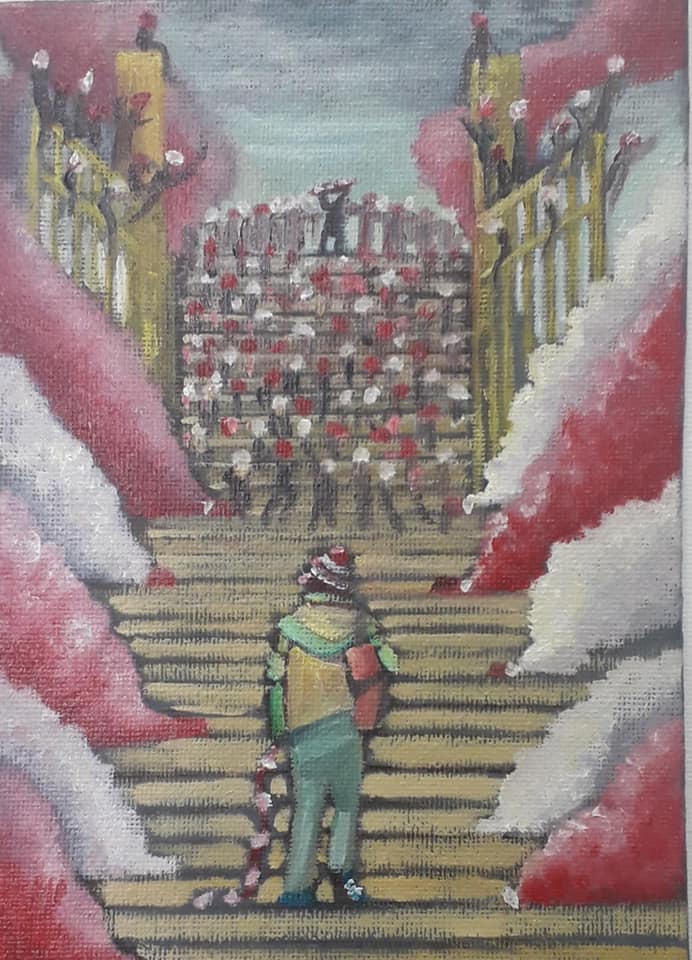 Alan’s work ‘And They Waited’

“They’re actually just dots but when people look at a painting, their eyes and their mind fill in the blanks so even though it’s only 96 red and white dots, it becomes this crowd of fans waiting for Andrew to ascend the steps and join them.”

The Toxteth-born artist’s dad and brother were both at the match in 1989 and Alan had originally planned to give the small colour study canvas to his dad.

“He has a Liverpool room in his house where he’s got all his memorabilia and I was just going to give it to him,” he says. “I posted it on my page, and I’d done a painting for Carragher’s Bar in New York about five years ago and the guy who owns it, Brian, shared it and it just snowballed from there.

“It popped up on Twitter and then it just kept going. Thousands of people have now viewed it and shared it across the globe and the amount of positivity there’s been around it has been amazing, I don’t think there’s been one negative comment.

“One of the best I read said it would bring a tear to a stone, that really got to me.

“I genuinely hadn’t expected it to do what it’s done. It’s a tiny painting, like the warm-up ones I do before I get into my bigger work, but it just hit a chord with people.”

One of those people was Gill, Andrew’s sister. She got in touch with Alan after seeing the painting and he has now framed it and intends to give it to Andrew’s family.

There will be no prints, despite many requests, because he wants them to have the only one.

He is working on a larger version, though, which he plans to exhibit publicly for everyone to see and reflect on, reinforcing a powerful message that the city wasn’t to blame for the tragedy.

As a former winner of the Liverpool Art Fair People’s Choice Award, Alan is used to seeing his work be critically acclaimed and reach a wide audience. He has created many public artworks in Liverpool, including the Titanic on Park Road and Shankly mural in the Shankly Hotel.

But this one has had a particular resonance and he hopes it will give some comfort to Andrew’s family.

“Everyone who’s seen it has said that even though it is really simple, it’s honest and it says so much.

“The best part for me is that it’s offered something for the family, so now whenever they think about where he is, they can imagine him on that staircase heading up to his mates.”