One of the most exciting children’s authors in the UK today, Natalie Reeves Billing is set to release her latest book today, ‘Bernie & Boatie’ with all proceeds going to mental health charities in a bid to tackle the crisis facing young people as a result of the pandemic.

‘Bernie and Boatie’ is Natalie’s fifth independent offering and follows the magical journey of Bernie and his faithful vessel, Boatie, as they set sail on their sometimes perilous but ultimately epic adventure across the Atlantic.

All proceeds from the new book will go to the national Boat of Hope campaign, which will see Liverpool charity guru and adventurer, Bernie Hollywood OBE embark on a 90-day solo sail from the Canaries to Antigua in 2022 to raise £1m for various causes. ‘Bernie and Boatie’ will be released on the same day that Boat of Hope has its national launch at the National Maritime Museum in Greenwich, London.

‘Bernie and Boatie’ has also been produced as an audiobook and an animated trailer, with narration from Spice Girl, Melanie C and Doctor Who star, Sacha Dhawan.

Speaking about ‘Bernie and Boatie’ and the importance of the ‘Boat of Hope’ campaign, Natalie Reeves Billing, said:

“I can finally unleash ‘Bernie and Boatie’ into the world, and I’m so excited to see this important collaborative book in action. Like with all my works, behind the story is a very important message about mental health, particularly in young children – and how through talking openly and honestly with our families and friends about our thoughts and feelings we can overcome the storms that life throws at us. In this story, the sea represents our emotions, our ups and downs, as we try to find the light beyond adversity. 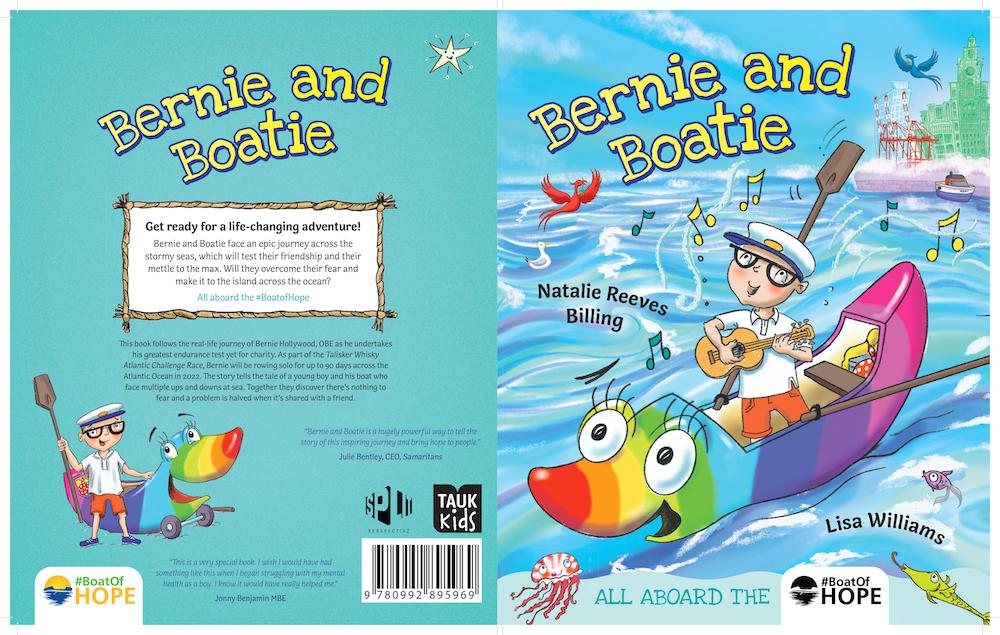 “Of course, ‘Bernie and Boatie’ is inspired by my dear friend Bernie Hollywood OBE and all proceeds from the book will go to the Boat of Hope campaign which aims to raise money for some incredible mental health charities, and open up a conversation about depression in young people – a subject that I am passionate about.

“By purchasing this book people will be helping a family who are struggling with child mental health and how to navigate it, as well as getting a really beautiful, useful resource for talking about mental health in the home.”

Author of The Monstrous Me Collection and Ben and the Bug, Natalie Reeves Billing is a storyteller with a mission, whose wicked sense of humour and quirkiness creates worlds and characters that not only enthral young readers, but talks to them openly and honestly about mental health issues. Through her split perspective stories, which explore multiple points of view and narratives, the author speaks to children and their parents in ways few authors have before – making them understand that it is good to talk openly together about their thoughts and feelings, and learn from each other by listening.

MORE - Adele is launching her new album with an Oprah interview

The Boat of Hope campaign will open up a conversation on depression and in particular the young adults it affects, with a view to help destigmatize it to a UK and global audience of 950 million children and adults. The aim is to raise over £1 million for two supporting charities – Samaritans and LOVE Rowing, British Rowing’s Charitable Foundation. Natalie is the early years and primary ambassador for the campaign.

‘Bernie and Boatie’ is published by Natalie’s own publishing imprint, Lollipop Lodge, and is available to buy on Amazon from Tuesday, October 12.