Liverpool cafe launches suspended coffee act of kindness where customers pay it forward - The Guide Liverpool
Contact Us Advertise with The Guide Our Video Services Follow us:

Childwall coffee shop Fika Coffee is running a ‘suspended coffee’ scheme, where customers pay it forward and buy a second cup as an act of kindness for a stranger.

The idea began in Naples back in 2013, but with the pandemic hitting so many people in the Liverpool, Fika owner Anthony Grice decided the time was right to launch it here.

And within its first week, he’s already had more than 100 coffees bought by customers for someone else. 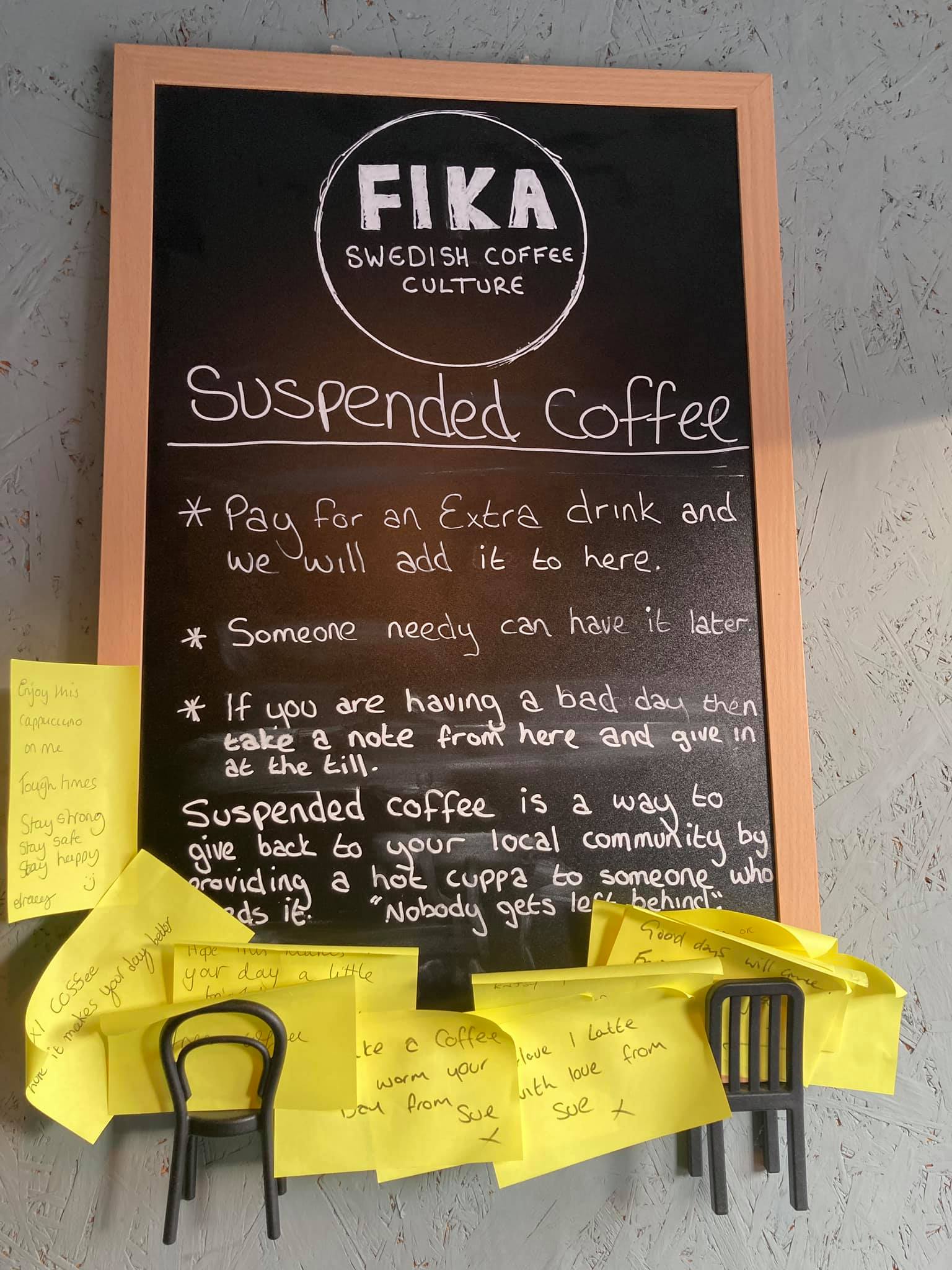 Anthony explains: “I’d heard about it a couple of years ago but then I thought, let’s execute this now because lots of people have lost their jobs, their circumstances have changed over the past few months, or even just because someone might be having a bad day or struggling with what’s going on.

“Since we started, the reaction and the generosity we’ve seen has been unbelievable. On social media we’ve had loads of messages from people who follow us asking how they can get involved, from all different parts of the country.

“One lady messaged me from Leeds and said ‘how can I send you some money?’, so I think the idea of being able to help someone else in such a simple way has really caught on.”

Anthony says the suspended coffee idea works really easily and discreetly – customers who want to buy another coffee just pay for it when they buy their own, then a sticky note is put on Fika’s A-board and anyone wanting to claim the coffee takes the note and hands it over the counter.

“Our board is covered in sticky notes already so I’m going to put it in the window where people can see it from inside and outside the shop. If they’re in here having a drink then it might prompt them to ask more about what we’re doing, and if someone is walking past then hopefully they could see it and think it’s a little pick-me-up. 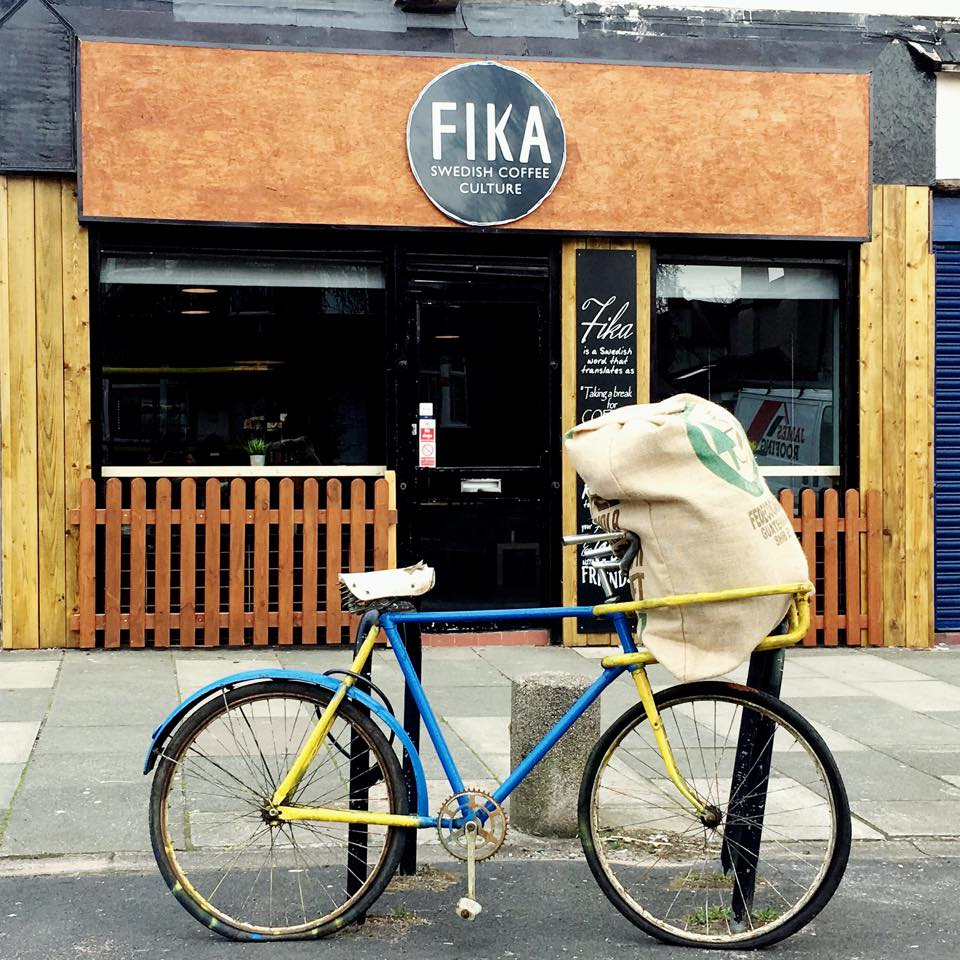 “All they need to do is come in and take a post-it off the board, hand it to one of our staff and say, ‘can I get one of these?’ It’s as simple as that. There’s no fuss, other customers wouldn’t even notice, so we want to stress that people don’t have to feel embarrassed or too proud to do it.”

Anyone buying a second cup is given the option to write a little note to whoever claims it. 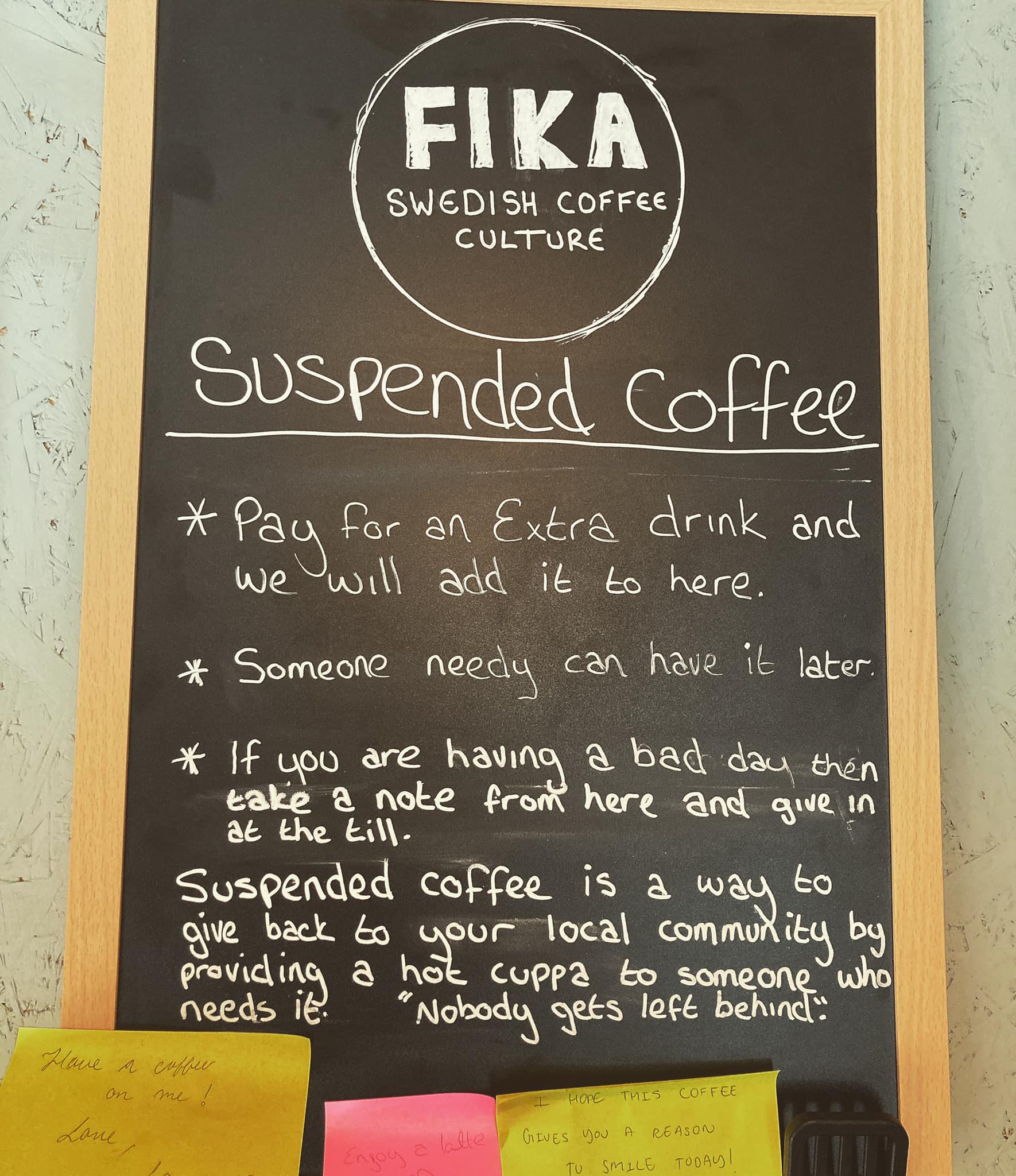 After putting together and delivering a huge amount of care packages at the beginning of lockdown, Anthony says he’s seen how much some people have suffered financially and emotionally, even though they might not always seem to be.

“We had so many people contacting us and saying ‘any chance of a few bits, I’ve lost my job’ or ‘my husband’s lost his job’ and we saw people struggling, it was a real eye-opener.

“People can look like they’re doing fine but you can’t judge a book by its cover. Picking up a coffee could be one little thing that just lifts someone’s day and makes that difference.

“We’re right on the border of Childwall and Wavertree and I really want us to be a hub for this community. The word Fika means to sit down and meet new friends and this is the perfect example of that – you don’t have to have any money for a coffee but you can still come in, there’s a drink there for you and there’s always someone here to have a chat to.”

Anthony plans to run the suspended coffee scheme until at least Christmas, and any left unclaimed by then will either have their payment donated to charity – the café runs a Christmas toy appeal for children – or the coffees will be given away free to a good cause.

“I can’t believe the response we’ve had so far, with so many already purchased, now we’d just like more people to come in and collect one,” he says.

“Suspended coffee is a win win idea because it helps generate extra revenue for independent businesses like ours which are struggling in these times, for people purchasing the coffees it’s a way of doing a bit more to support the community, and then obviously the people who are getting one for free benefit as well.”

MORE - We celebrate Hollyoaks 25th anniversary with one of its stars, Liverpool’s Alex Fletcher