Liverpool Chef, Dave Critchley gets set for Great British Menu - The Guide Liverpool
Contact Us Advertise with The Guide Our Video Services Follow us:

Liverpool chef Dave Critchley has been revealed as one of the competitors in the new series of Great British Menu.

The creative genius behind fine dining Chinese restaurant Lu Ban has been selected to represent the North West in the popular BBC2 programme, which challenges professional chefs from eight different regions to design the perfect menu.

Dave, 38, from Liverpool, said: “It feels amazing to have been asked to take part.

“It’s something I have been a huge fan of since I was young. There have been some fantastic chefs on there so to have been selected to be involved is a huge honour.

“It’s an ambition of mine fulfilled and, while I’m sure there will be a lot of pressure, I’m going to try and enjoy myself and enjoy representing the North West, Liverpool, and Lu Ban.”

Great British Menu returned to our screens last month for the 16th series of the top cookery show and we can see Dave from May 5.

Chefs who have already notched up great success challenge those at the start of their careers and, with three episodes a week, the regional heats all take place before the ‘finals’ week culminating in the Banquet.

Initially Dave will compete against three others from the North West – Kirk Haworth from Plates, London, who’s originally from Blackburn; Liverpool-born Dan McGeorge, from Rothay Manor in the Lake District and Ashwani Rangta, executive chef at GupShup in Altrincham who’s originally from Shimla in northern India.

Dave said: “To appear on the programme you have to be nominated by someone and they watch you and research you before asking you to appear on the show.

“I put pressure on myself all the time, to get the best results I possibly can, and I’m sure it will be really stressful trying to do my thing under the glare of the cameras, but I need to remember why I’m there and just be me! I think the tactic will be to just try and relax and perhaps forget I’m competing against the other chefs. 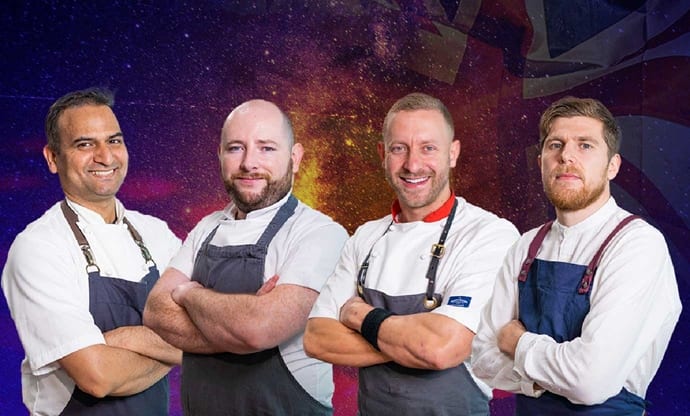 Dave has been in kitchens since he was 15, although he trained at university as a graphic designer and children’s book illustrator. It was after university that Dave decided to become a chef and learned on the job.

He ran some of Liverpool’s, and the North West’s, flagship restaurants including Alma de Cuba, The Noble House and Australasia, and became executive head chef at the city’s prestigious London Carriage Works.

In 2019 he took a different direction, having been selected as the last ever apprentice of a world-famous Chinese chef, Master Wu. He spent time in China exploring traditional Chinese cookery, inspired by the region of Tianjin.

This year’s theme for Great British Menu is British innovation, as 2021 marks 30 years since Sir Timothy Berners-Lee first made the internet widely available, as well as Helen Sharman becoming the first British astronaut to go into space.

Dave has chosen ‘local heroes’ as inspiration for his menu, ‘going a little off piste’ to select people who have been innovators in Liverpool.

“I have chosen people who many might not be aware of, but who have helped people in the city,” he revealed. “I wanted my dishes to reflect their characters and be about Liverpool and these people, their community – my people, my life, my city, and my community.

“They are people who helped others, which I hope reflects me and my philosophy, they are people who have inspired me to do the work I do,” added Dave who set up LIDS, Liverpool Independent Delivered Service, during the pandemic, which brought together local independent suppliers to offer families a high-quality delivery service of essential fresh foods, and helped found a new charity, Knowsley Kitchen, to provide food for those less fortunate and help them beyond a ‘handout’.”

His menu includes a flavour of Lu Ban but also Dave’s 20-plus years of experience elsewhere.

“It’s incredibly exciting,” added Dave, who says he wants to highlight the fact that there are great chefs and great restaurants in areas other than the capital.

“Afterwards, I would like to see more people come and try the food we are doing at Lu Ban and really showcase the hard work we have done at Lu Ban over the last two years.

“Long term, who knows? I will be happy to see where it takes me from now.  Would I like to do more television? Yes. But it’s just nice to have recognition after a lifetime of work.

“Of course, I would love to go and win but I will certainly go and take in the experience and enjoy it …as much as that’s possible.”