Liverpool has launched an International Song For Kindness contest in memory of John Lennon - The Guide Liverpool
Contact Us Advertise with The Guide Our Video Services Follow us:

To mark the memory of John Lennon on the occasion of his 80th birthday the city of Liverpool has launched a worldwide contest to find another great songwriter to inspire and brighten his hometown as it faces one of the darkest times in its history.

The Liverpool International Song For Kindness Contest aims to find an anthem that will follow the example of John Lennon’s Imagine and will raise spirits and inspire hope and goodwill as the city plans its recovery from the devastating effects of the Covid-19 pandemic.

The contest – launched by Liverpool City Council in association with the kindness charity tuff.earth and the world-famous Cavern Club – will run for 11 months and will be open to every songwriter and band on the planet, amateur and professional, “from buskers to Beatles”.

The contest will work to highlight the Mayor of Liverpool’s Liverpool Economic Recovery Plan, which in part aims to stimulate the city’s creative industry. The winning song will be announced on September 9th 2021 – the 50th anniversary of the release of John Lennon’s Imagine.

The Liverpool Song For Kindness Contest was announced by the Mayor of Liverpool, Joe Anderson OBE. 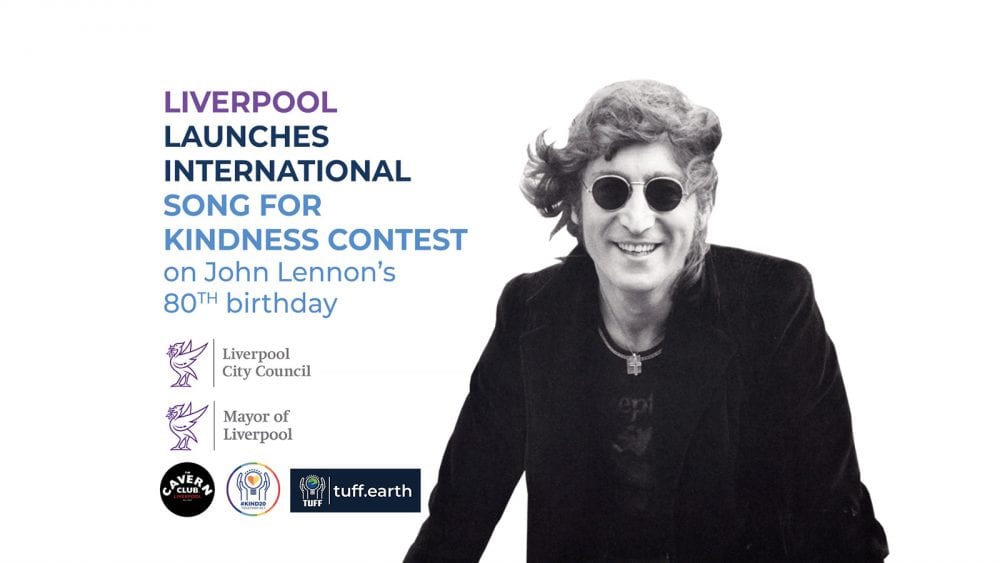 “Liverpool needs a positive and uplifting story in these current days, so we are turning to what this city does best – making music.

“Liverpool is the world capital of music and we need now to hear it loud and proud again. Music heals, it inspires, it brings happiness and it brings us hope.

“This contest will help to unify the people of Liverpool, encourage acts of kindness in the city and inspire the songwriters of both here and around the world. It will bring new energy to the legendary Liverpool music scene, encourage young people to learn an instrument and make music, and who knows what great songs could come out of this?

“It is fitting that we are launching this initiative on the 80th birthday of John Lennon, the songwriter who was one of this city’s greatest sons. The songs that John wrote with Paul in The Beatles and the classics like Imagine that he created as a solo artist and with Yoko changed the sound of music and uplifted the world. Now we need to be uplifted again.”

We spent the day at Strawberry Fields, celebrating John’s 80th and speaking to some people who knew him very well. See below.

The contest to find an official Liverpool Song For Kindness will run annually, with a different song elected each year, and in perpetuity. It will form part of a community programme to encourage kindness, peace and compassion in the city which is being developed for Liverpool City Council with the kindness charity tuff.earth as part of its international KIND20 Covid-combatting project with has reached over 6 Million people worldwide.

The tuff.earth charity works in scores of countries to encourage acts of kindness through its #KIND20 projects in communities and schools around the globe. Details of the charity’s humanitarian work can be found here.

“The Liverpool Song For Kindness Contest is inspired by the message of Imagine, the world’s most-popular anthem for unity, peace and kindness. And that song pretty much says what this is all about – in the grip of Covid-19 Liverpool, and indeed the world, must come together and be as one. The launch song for the contest, Jimmy Coburn’s Together As 1, pretty much says what it’s all about – in the grip of Covid-19 the world must come together again and, as John Lennon’s Imagine also puts it, be as one.

“Songs and music in all and any styles and genres can be entered in the contest; it can be your song or a cover, it can be rock ‘n roll or rap or classical and orchestral, and the contest is unique in that it is open to every musician on the planet, unknown or famous, from buskers to Beatles – literally, if Paul or Ringo want to submit a song they would be very welcome to.

“We are inviting entries in any language, it doesn’t matter what language as this is all about the power of music, which we all understand. Who knows, maybe this contest will reveal another Imagine?”

Gem & Josh are @strawberryfield as we celebrate #JohnLennon80. This week we filmed a very special Liverpool #JohnLennon tour, curated by @cavernliverpool's Dale Roberts. ?

Bill Heckle, Director of The Cavern Club where The Beatles first performed on the lunchtime of February 9th 1961, said:

“Next year marks the 60th anniversary of when and where it all began. The Cavern Club is supporting this contest in the hope that it will begin something truly great again.”

The winning song will be chosen by public vote on Facebook, with the most Likes deciding the winner, and it will be given its premiere performance at The Cavern Club on September 9th 2021. Organisers are planning for the song to then be performed at every major Liverpool music festival and at other landmark festivals.

To enter the entirely free contest, songwriters, bands and all musicians around the world are invited to simply upload a video of themselves performing an appropriate song of their own composition or their cover of another’s song to the KIND20 page on Facebook.

Alternatively, contestants can also upload their song to a Dropbox link here.

MORE - “How will we survive?” Liverpool family taxi firm faces its toughest fight in 50 years