Liverpool reflects on visit of Nelson Mandela's family and week-long series of events to mark occasion - The Guide Liverpool
Contact Us Advertise with The Guide Our Video Services Follow us:

The family of Nelson Mandela returned to Liverpool for a week-long series of events in the city which saw them take part in arts events, a gala dinner, and an engraving of the stones to be used as part of a new memorial soon to be opened in Toxteth.

The former President’s eldest daughter Dr Makaziwe ‘Maki’ Mandela and his granddaughter Tukwini Mandela, travelled to the city to make their mark on artwork which will form part of the city’s permanent Nelson Mandela memorial in Princes Park. Dr Maki and Tukwini last visited the city in February 2019 to give their blessing to the Princes Park location for the memorial which is set to be completed by the end of the year.

The series of events organised by Toxteth-based charity, Mandela8, began on Mandela Day itself – Monday 18th July, with the Queen’s Baton Relay for the Commonwealth Games journeying down Princes Avenue to Princes Park. Following this, a parade of placards designed by local schoolchildren, in partnership with Writing on the Wall, also travelled the length of the avenue, starting at the new Nelson Mandela mural on the wall of the Kuumba Imani Millennium Centre and finishing in the park with a picnic and speeches from those involved, including the Mayor of Liverpool, Joanne Anderson.

This was at a special as part of #MandelaWeek. Follow @Mandela800 to find out what else is happening.@CultureLpool pic.twitter.com/Icl77tdSPj

The first official engagement for the Mandela Family came on the Wednesday with a Civic Reception at Liverpool Town Hall attended by the Mayor, Lord Mayor, local dignitaries and invited guests from across the region.

The reception was followed on the Thursday by a special ‘Audience With…’ event in St George’s Hall, which saw the Mandelas in conversation with the Anti-Apartheid Movement leader, Lord Peter Hain, and hosted by writer, Marcus Ryder MBE. Prior to the event, the Mandelas officially opened the newly renamed ‘Mandela Suite’ in the Hall, which houses Nelson Mandela’s original sketches, known as the ‘Struggle Prints’. 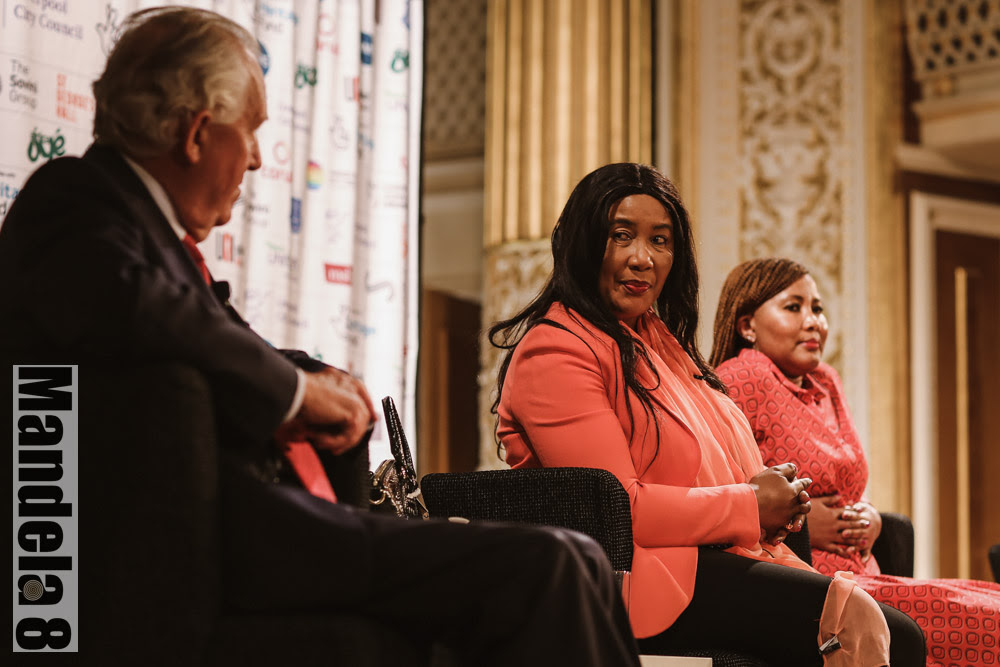 The event saw the Mandelas take questions from the public in attendance in the beautiful setting of the main hall and also featured live music and spoken word from Congolese and Liverpool artist, Dorcas Seb.

MORE - 15 things to do this summer on the Wirral

On the Friday of Mandela Week, Maki and Tukwini took a visit to the Museum of Liverpool to view the ‘Liverpool 8 Against Apartheid’ display, which tells the story of how Liverpool’s Black community supported the anti-apartheid campaign in the 1980s. 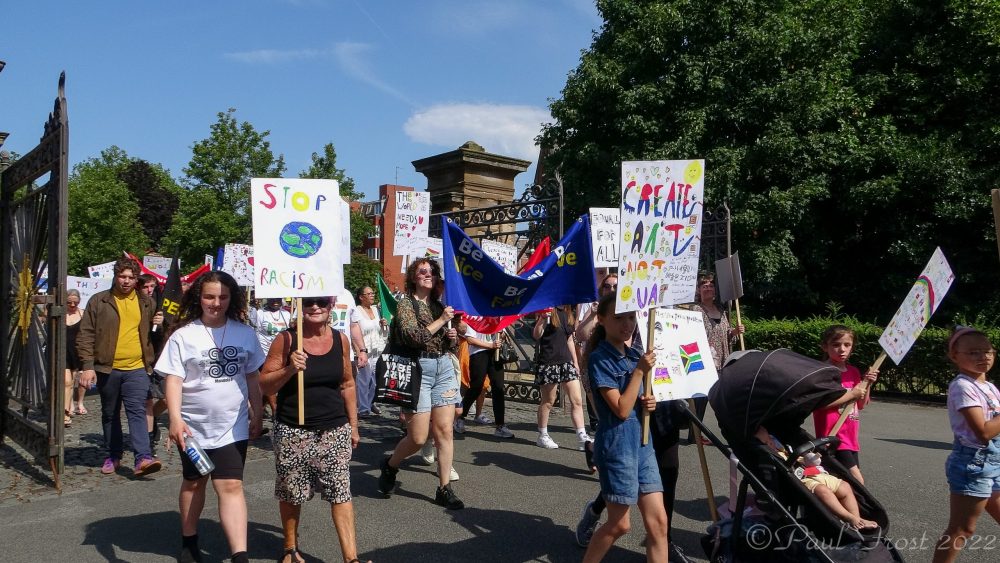 On the Friday evening, The Hilton Liverpool hosted a black tie Gala Dinner for the family with those in attendance treated to live music from both international and local artists, as well as stand-up from the event’s host – Britain’s Got Talent star, Daliso Chaponda. 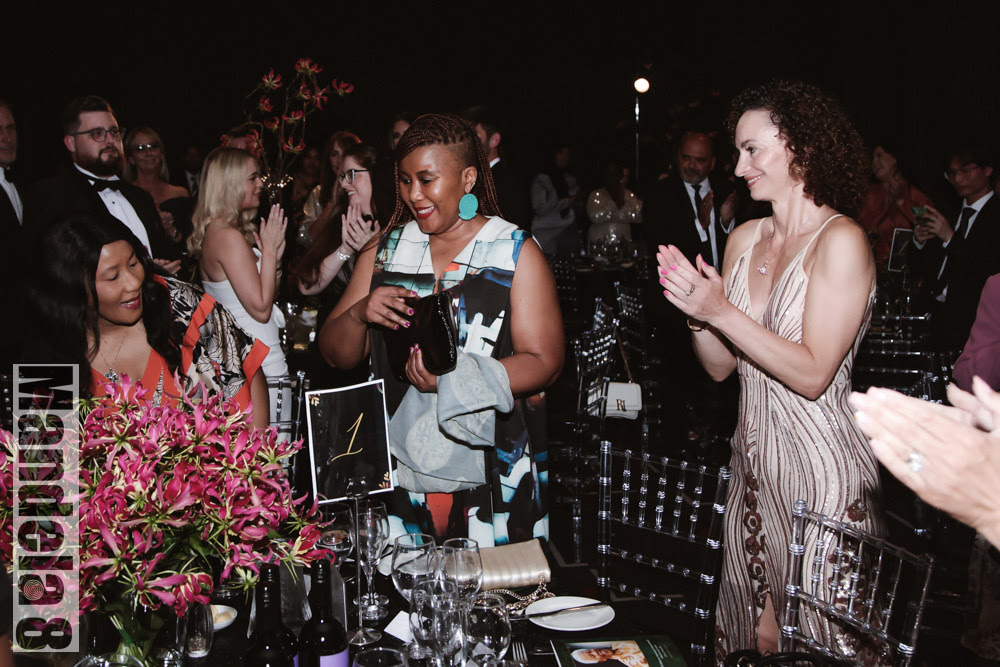 The Mandelas taking their seats at the Gala Dinner at Hilton Liverpool (Photo: John Hollingsworth)

On Saturday morning, the Mandela family and members of the Mandela8 Board visited Crosby Memorials where the new memorial’s stones are being engraved. Both Maki and Tukwini Mandela assisted in the engraving of a stone featuring a quote from Nelson Mandela himself.

The completed memorial will include a ‘Freedom Bridge’, a pavilion and the engraved 32 cylindrical stone-work pedestals. These pedestals represent the oil drums used to grow an allotment on the rooftop of Pollsmoor Prison where Mandela was held for part of his prison sentence.

The work will reflect Nelson Mandela’s love of gardens and horticulture along with his struggle for freedom, equality and humanity. The spaces will be used for future activity in the park, acting as a focal point and an area to visit, reflect and educate. 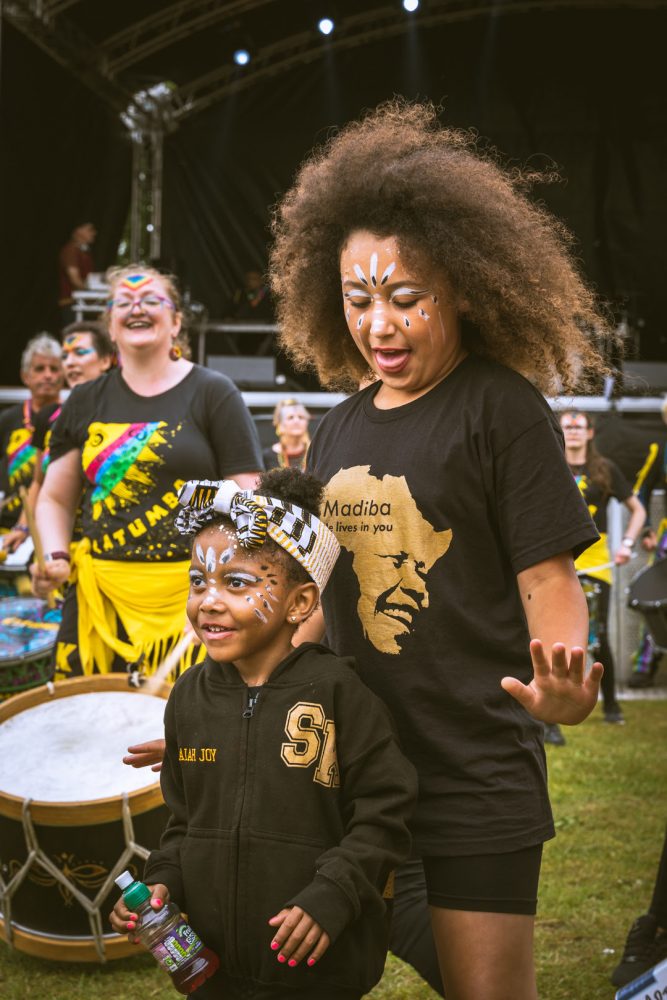 The week’s events concluded in style on Saturday afternoon with a free family festival in Princes Park that saw artists from South Africa and Liverpool come together for an eclectic celebration.

South Africa’s own BCUC and Nkulee Dube headlined the live music line-up, whilst community workshops led by the likes of world dance charity Movema and drumming troupe Katumba delighted festival-goers of all ages. 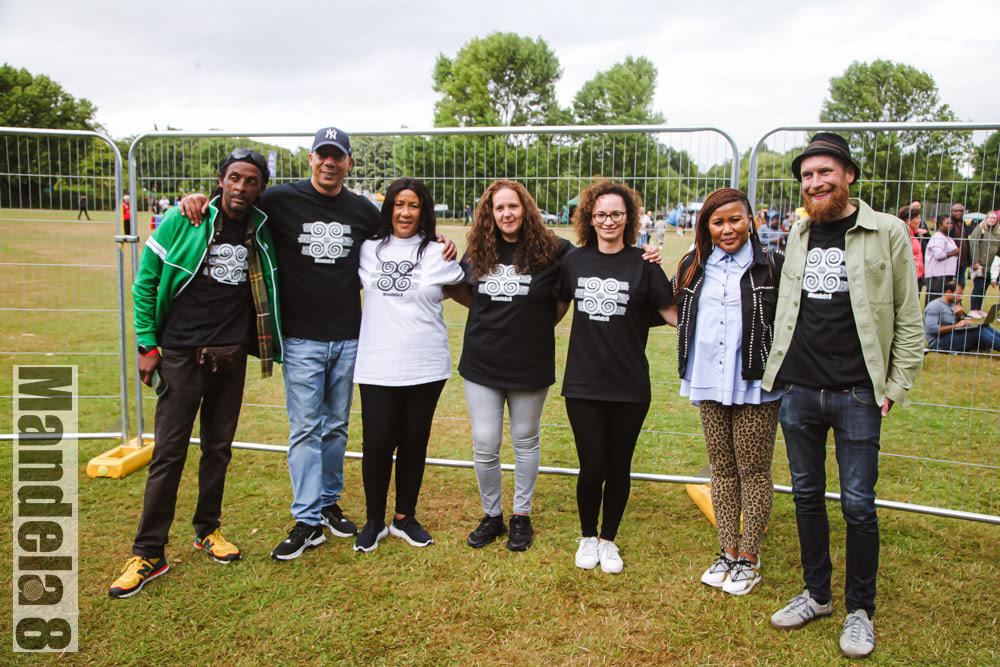 “It was wonderful to welcome Maki and Tukwini back to Liverpool. The city shares a special bond with the Mandela family and we are honoured to have this international friendship.

Nelson Mandela had all the qualities that Liverpool aspires and fights for. His passion for social justice and rejection of hate are issues that are never far from our minds.

I’d like to thank Mandela8 for their incredible work and for creating this lasting legacy to a man of courage, wisdom and bravery who continues to inspire us today.” 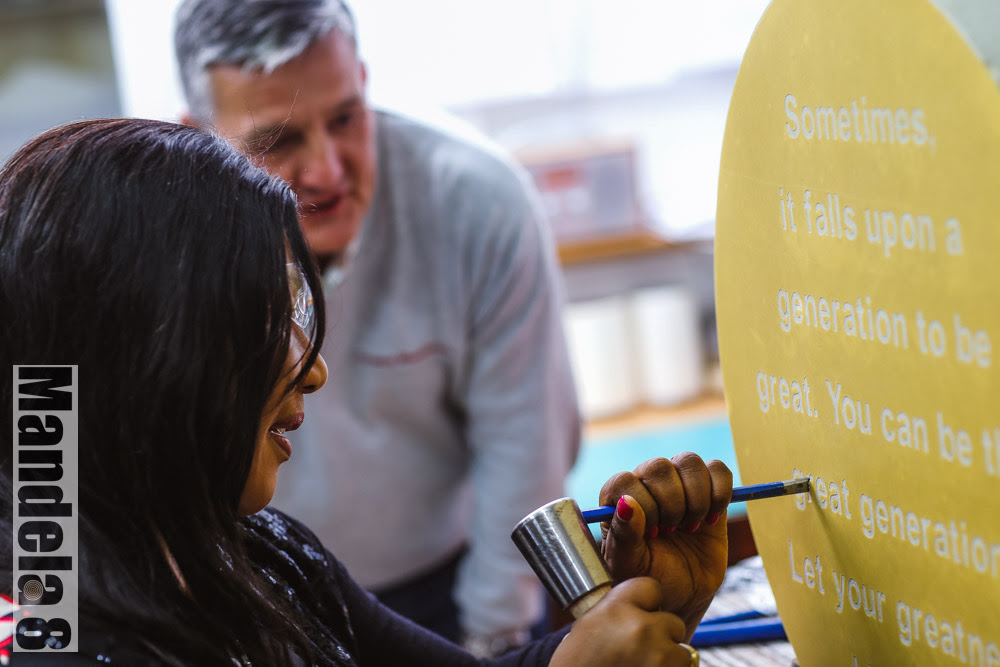 “As a social purpose group serving a diverse tapestry of North West communities, being part of the work Mandela8 has been developing, has been a proud moment for the Torus group. Teams across the group take pride in investing in projects that help to enrich our core communities and with over 14 years of working alongside local organisations, we’re delighted to see opportunities being enhanced and communities growing stronger.

“It was an exceptional week of events and we’re looking forward to seeing the positive impact on the wider community in the future for a more just and inclusive society.”

“The Trust of St. Georges Hall were honoured to welcome Maki and Tukwini Mandela on the auspice occasion in the renaming of one of our rooms to the Mandela Suite. This suite display’s the Struggle Prints by Nelson Mandela which are of historical significance. The renaming of the suite is of major significance to the Trust and our strategy to have a hall that is inclusive and reflects all of our communities. We especially want our children and young people to come to the hall and see people that look like them and be proud of the great contribution they have made to the world.

We have had a wonderful response to the event “in Conversation with the Mandela’s with Lord Peter Hain” and it was so expertly chaired by Marcus Ryder MBE. It was also wonderful to work with Sonia and the Mandela8 team; congratulations to you all for bringing us such a joyous week.” 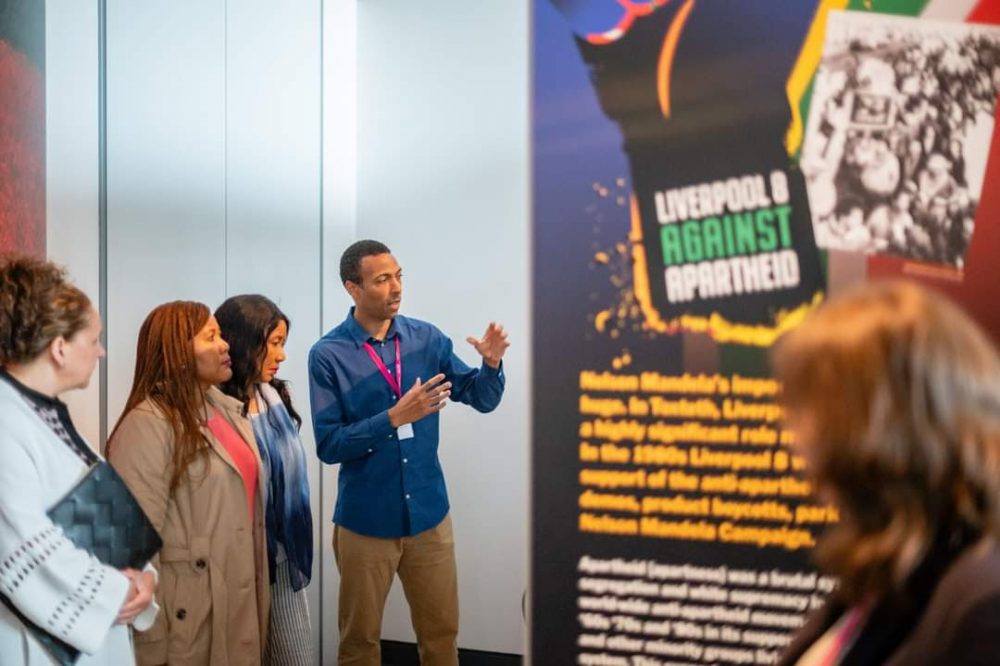 “Never did we think when we started this journey we would witness something so special; the visit will go down in history as one one of the best Black events in Liverpool. I want to give a huge thank you to the machine that is Mandela8. Especially our board, our advisors, patrons and ambassadors – who alongside me listened to what our community wanted and had the vision to see what was possible when you dream big. I am truly grateful for you all.

There were so many powerful and emotional moments during the visit but I won’t ever forget the Mandelas being there for the renaming of the suite in St George’s Hall and the incredible sight of them engraving Nelson Mandela’s quotes into the stone that will be used in our memorial in Princes Park. It was a truly special week for the city.”