Liverpool's new Mayor officially opens The Spine at the Knowledge Quarter - The Guide Liverpool
Contact Us Advertise with The Guide Our Video Services Follow us:

The landmark building, The Spine, based in Paddington Village, has been designed according to the scientific and medical research principles established in the international WELL Standard to achieve WELL Platinum. It is on track to be one of the healthiest workspaces for mental health and physical wellbeing in the UK.

Costing £35m to construct, it is the first Grade-A office building in the Liverpool City Region for more than a decade. It will also be the highest in the city, sitting proudly at the eastern gateway to the Knowledge Quarter Liverpool (KQ Liverpool) Innovation District.

The 200,000 square foot, 14-storey building, designed by architecture and building consultancy practice AHR and built by City Council appointed contractors and construction partners Morgan Sindall Construction, stands more than 500ft above sea level, commanding spectacular views across the city and as far as Snowdonia, the Lake District and the Pennines.

MORE - Everything you need to know about the Knowledge Quarter, Liverpool

In what will be their first joint public event since being elected, Mayor Joanne Anderson and Metro Mayor Steve Rotheram will take a tour of the building, which will include meeting some of the 90 young apprentices who have helped to construct The Spine over the past four years.

The Mayors will be greeted by Dr Andrew Goddard, the President of the Royal College of Physicians (RCP). The RCP represents over 40,000 doctors throughout the world, and RCP at The Spine will be the organisation’s northern home and its first significant presence outside of London, providing events, activities and services closer to its northern members. The historic medical institution, whose roots go back to the reign of Henry VIII, has spent £13m fitting out its offices across seven floors to accommodate exams, education facilities, conferences and meetings at a world-class standard.

The Spine’s unique layout and design also uses biophilic design principles, with strong connections to nature established throughout the building. The distinctive façade takes inspiration from the human skin, with the striking Voronoi pattern including 23 million individual polygons applied in a frit pattern to 1,400 glass panels. 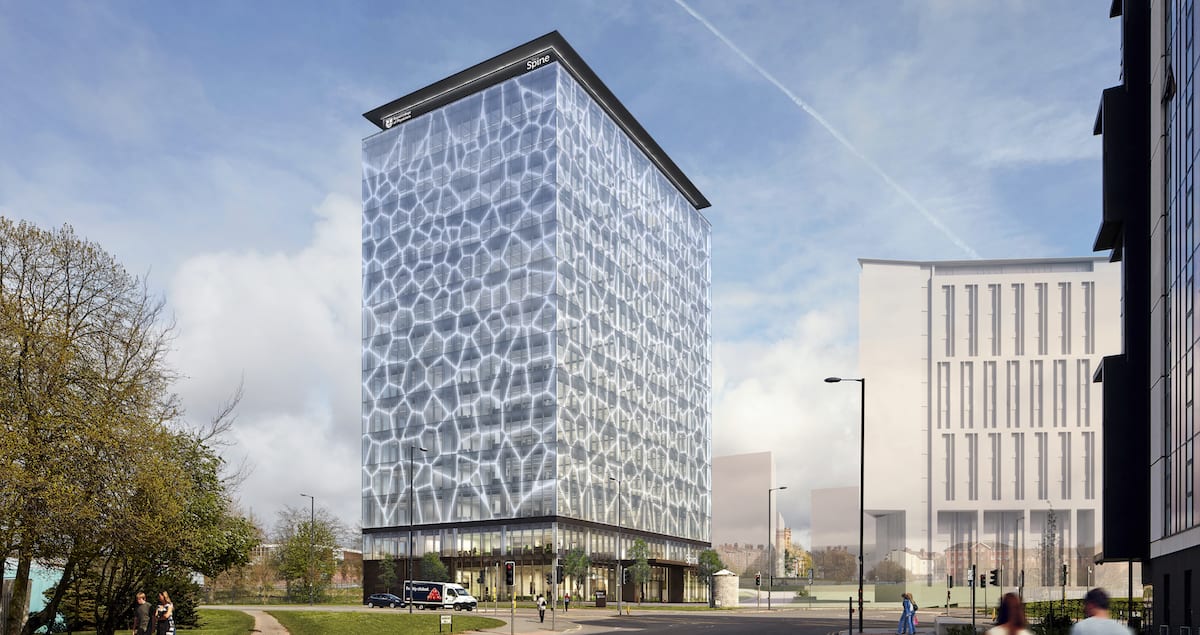 The Spine’s eco-credentials are also boosted by three double-height spaces on the ground, 10th and 12th floors, with planters containing high-oxygen-producing plants to improve the internal environment, a large number of cycle spaces and electric car charging points installed at the nearby car park.

A dedicated exhibition space on the first floor will connect via a staircase to a ground floor café and foyer, while the higher floors, which are circa 11,550 square feet, will enjoy some of the best views of the city thanks to floor-to-ceiling glazing throughout.

The building, which has generated a social value to the local economy of £28.9m, will be heated by a low-carbon heating exchange based within the ground floor of brand new 14-storey car park, which is due to open in July this year.

As well as The RCP, which has taken seven floors within The Spine, Clatterbridge Cancer Centre has taken a floor, with the City Council in negotiations to complete the occupancy of the building.

When complete, Paddington Village, which received £12m from the Liverpool City Region Combined Authority towards a £20m infrastructure programme, will feature several other buildings, some of which are already occupied. The University of Liverpool’s International College and The Rutherford Cancer Centre NW, opened in 2020 and a new hotel by Novotel will follow in April 2022.

Plans for further developments on Paddington are also being progressed, with designs for HEMISPHERE, a new health, life sciences and tech focused building, soon to be revealed by Liverpool Science Park owners, Sciontec Developments Limited.

At 30 acres, Paddington Village, which was once the site of a now relocated secondary school, is being developed by Liverpool City Council in three phases: Paddington Central, Paddington South and Paddington North. The £1 billion KQ Liverpool expansion site lies east of the city centre which, when complete, will be a key part of Liverpool’s world-leading innovation district – incorporating new science, technology, education and health space.

“The Spine is simply stunning and very much reflects the Liverpool we all want to see develop in the 21st century. Its unique design and distinctive look also symbolises the ambitions we have for Paddington Village – to create an innovation district to rival any in the UK and Europe.

“I’m delighted the RCP will be calling this their northern home. They are joining a fantastic roster of world class institutions and am sure will help attract others to join them. Of course, it’s not just about beautiful buildings. Paddington Village is stimulating new investment, creating apprenticeships and high quality job opportunities that will strengthen Liverpool’s economy for decades to come.”

“RCP at The Spine will deliver what our members tells us they want the most – for the RCP to be educating, improving and influencing – with our state-of-the-art assessment centre and educational facilities. It will allow us to have a base for our health improvement work as we continue to set high standards in educating physicians to provide the best care for patients in the UK and across the world. Our major investment in RCP at The Spine shows that we want to get closer to our members in the north and demonstrates that we’re all about health and healthcare right across the UK today.’

MORE - Liverpool on the look out for school crossing patrol staff