Look inside the new-look Café Tabac on Bold Street - The Guide Liverpool
Contact Us Advertise with The Guide Our Video Services Follow us:

Look inside the new-look Café Tabac on Bold Street

One of Liverpool’s best loved and most historic venues has undertaken a facelift during Lockdown.

Café Tabac has been a Liverpool institution for more than four decades.  Established in 1974, in the style of the great bohemian cafes of Europe, “the café at the top of the hill” has always been a hub for the creative residents of Liverpool, attracting artistes, singers and performers amongst it’s varied and colourful clientele. 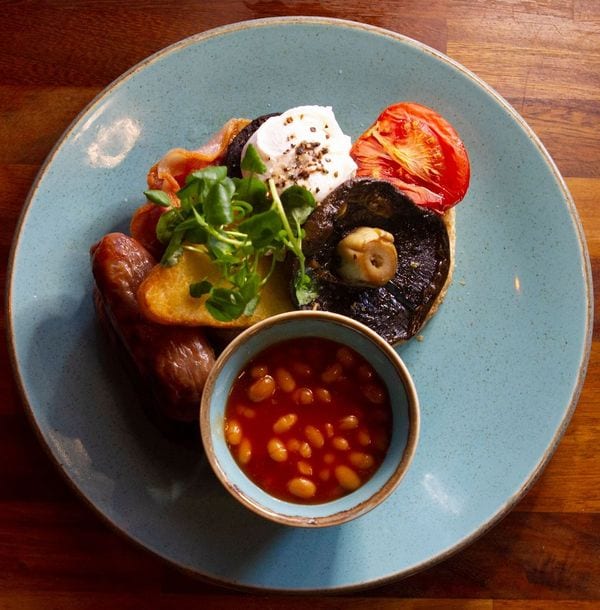 For many years, Café Tabac was owned by Rita, who was never shy to tell customers what she thought of them or those who made their cuppa last three hours.  The Café has never shut it’s doors and is now the longest running café bar in Liverpool, still independently owned by Rita’s family, and retaining the charm and authenticity that only comes with serving the city for forty plus years.

It is a real team effort behind the scenes.  In 1984 Elaine Clarke was just 16 when she began working for her Aunty Rita at the quirky Bold Street cafe.  As the saying goes, From small acorns grow mighty oaks; Elaine is now recognised as a powerhouse of the hospitality industry in the North West.

Operations Manager Kirsty Clarke oversees all sites and has supervised the transition:

“It’s rather difficult,” says Kirsty.  “when you want to change something and have a revamp yet want to keep so much of what makes the place what it is – there’s a fine line that we cannot cross.  The times that we are living in, unfortunately, gave us a period where we needed to be closed and so we felt like the perfect opportunity to change things about a little.  When life gives you lemons…..” 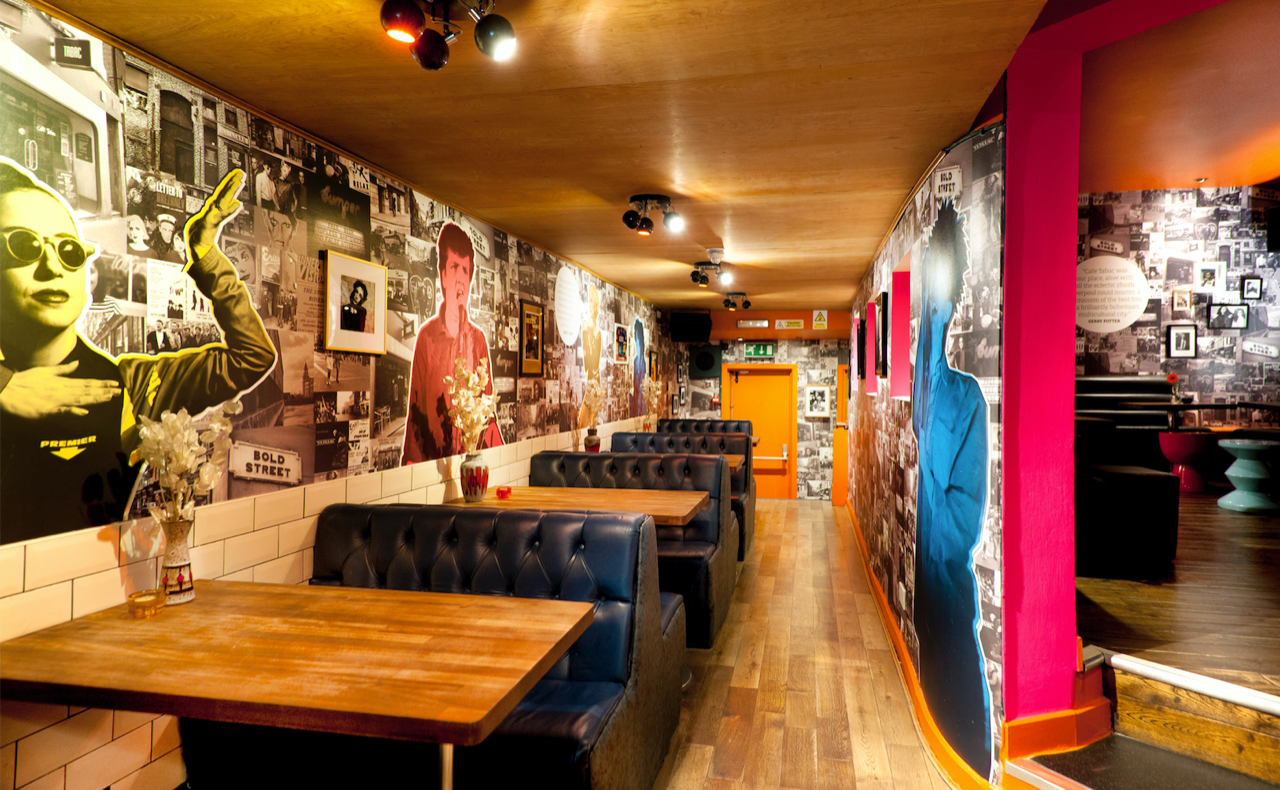 And that’s exactly what they have done at Café Tabac.  Made Lemonade.  Soo Wilkinson of Igloo Design is behind the new look Café Tabac.

“Elaine approached me a few years ago to help inject some design cohesion back into Tabac. We discussed Tabac’s history and the idea of doing a memory wall took shape, in homage to a period of Liverpool’s musical heritage that often gets totally over- shadowed by The Beatles. Tabac played a genuine role in the lives of the young movers and shakers of the Liverpool vibrant 80’s music and art scene. Bands like The Teardrop Explodes, The Mighty Wah, Echo & The Bunnymen, Frankie Goes to Hollywood, The Icicle Works and Big In Japan were all regulars at Tabac.” 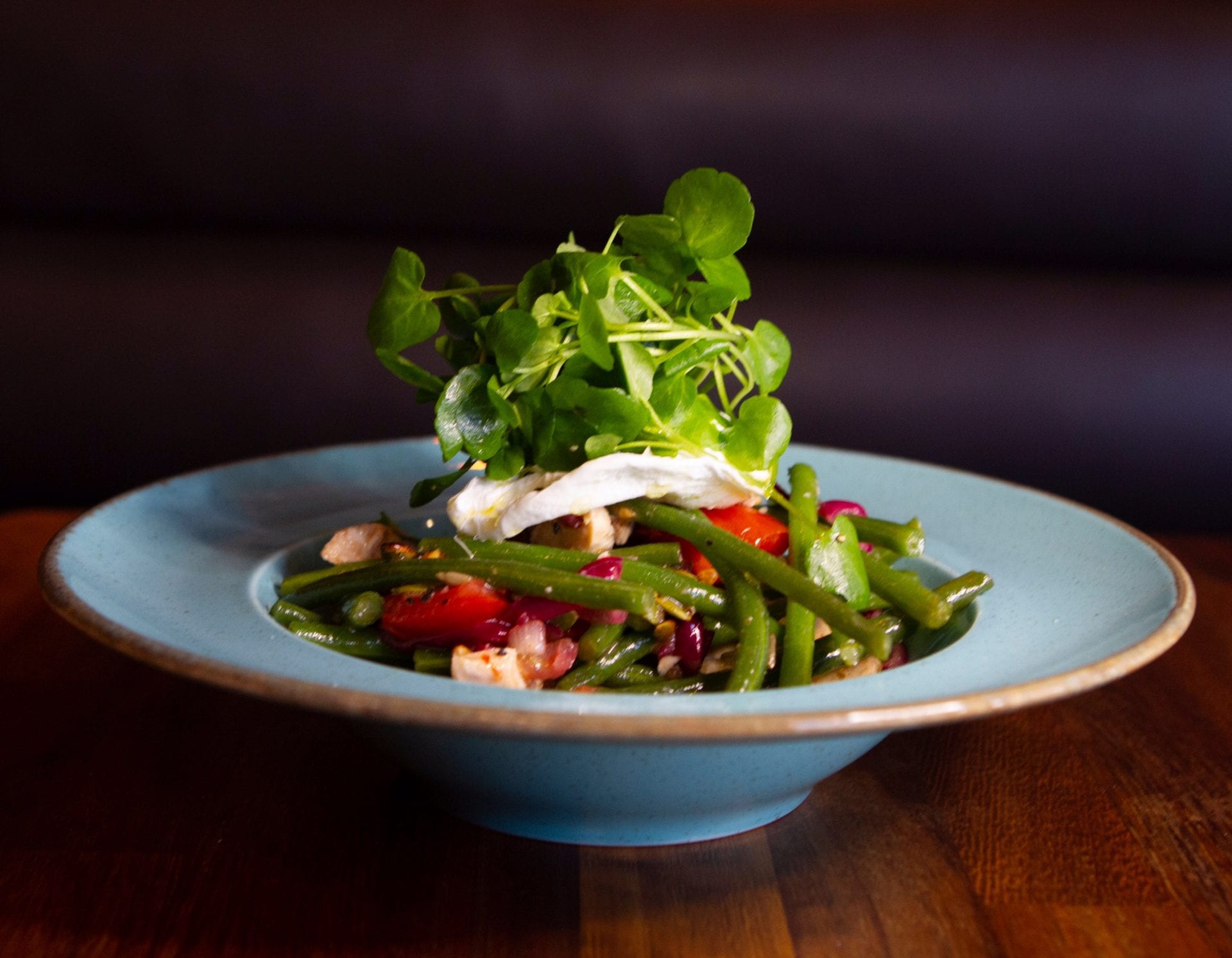 Soo’s collaborator was graphic designer Andy Garside, a fellow art student of hers in the 80’s in North Wales. “We used to travel to Liverpool to go to gigs and we’d go record shopping at Probe, where we’d be sneered at by Pete Burns, which was both intimidating and thrilling in equal measure! Needless to say we jumped at the chance to create an homage to the bands and artists that we were huge fans of at that time (and still are to this date if the truth be told.”

A huge collection of old posters, flyers and images of Liverpool were brought together and a backdrop collage was created. Some of Liverpool’s best loved legends from that time were highlighted; Pete Burns, Ian McCulloch, Pete Wylie, Margi Clarke, Jayne Casey and Chloe Poems (alter ego of punk poet Gerry Potter). They feature alongside a collection of framed images taken by Liverpool photographers Mark McNulty and Francesco Mellina. 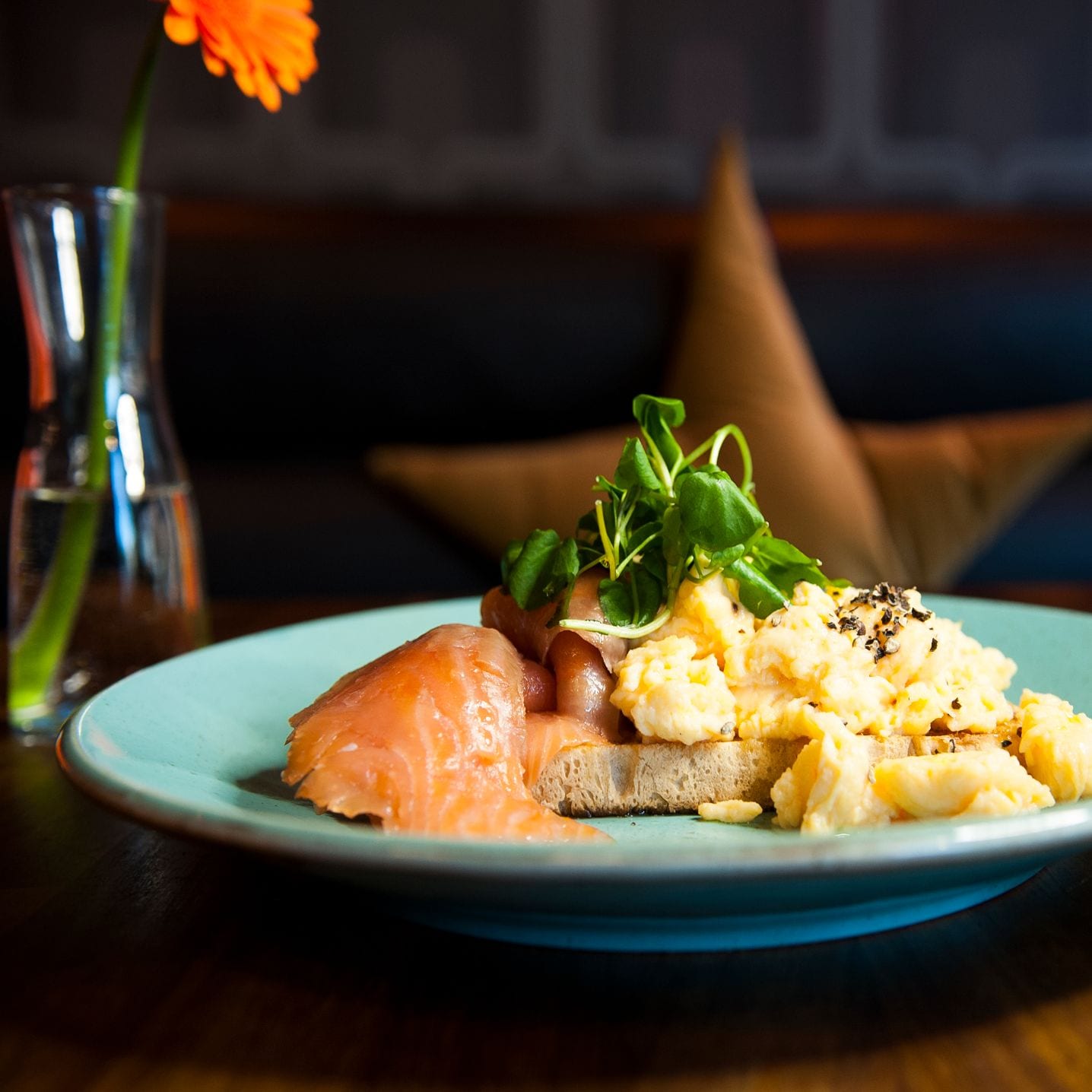 Referring to the design of the new look Tabac, Soo adds “We haven’t made too many changes to the bar area of, the 70’s wallpaper is still there, but we’ve added classic 70’s Verner Panton flowerpot lights and gave the place a lick of paint to add warmth and a pop of colour. On entry you are transported back to 70’s Tabac and then taken on a journey through to the 80’s. It’s been a privilege to play a part in Tabac’s legacy and an absolute joy to be able to highlight and remind people about one of the most significant eras in Liverpool’s cultural history. Long live Café Tabac!”

As part of the works, some of the interior is now a fantastic back catalogue of who’s who in Liverpool royalty. Memories of the venue, during the seventies, eighties and nineties – including photographs and memorabilia now adorn a number of the walls. Some of the city’s best known sons and daughters have been regulars since the doors opened and still frequent thefunky hangout. Former Frankie Goes to Hollywood frontman Holly Johnson said, “If I ever had any money for food back then, it was always spent on a sausage and apple sauce sandwich at Tabac, whether it was with the kids from the Everyman Youth Theatre or Anne Yvonne Gilbert who illustrated the cover for Relax!”

Actress Margi Clarke, who starred in the cult smash film ‘Letter to Brezhnev’ recalls the days of pre-mobile phones and hanging out at the Bold Street venue: “Tabac has always enjoyed a great position at the top of the Bold Street hill and it was a microcosm for Liverpool’s creatives. It was also my ‘office’ as it was the only cafe with a public phone. In the days of no mobiles, Tabac was essential for getting a job, as my agent would telephone the cafe, as they knew I’d be there! The lovely Rita used to field calls from international agents, and I remember she once told me I had a job in Monte Carlo!” 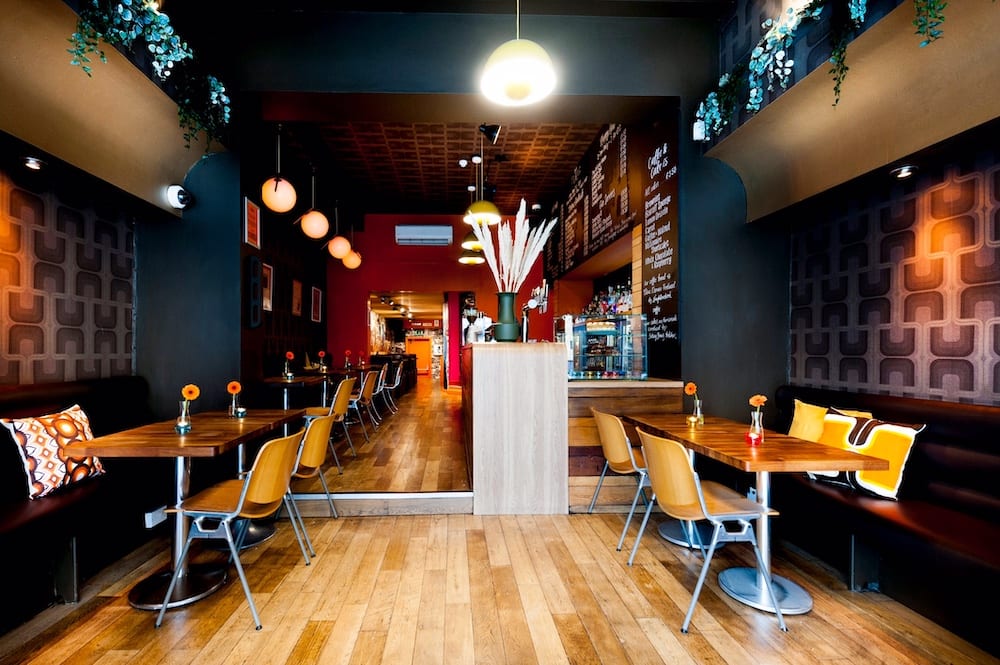 Performance Poet Gerry Potter adds, “I can’t recall the first time I actually went in, but completely remember the feeling of becoming part of it. We spent hours around one flapjack and a far too refilled pot of earl grey tea.  We were morphing into the adults we were because of Tabac. The place was instrumental in making my teenage/young adult life truly memorable and joyous and for that I can’t thank Tabac enough.”

Along with the interior refurbishments there has been some changes to the Tabac menu, whilst retaining all that has made Café Tabac so popular, we’ve introducing some new seventies and eighties inspired dishes that have been beautifully executed by our Head Chef Bozena Stalij.

So maintaining many of the dishes which helped give Café Tabac the label of ‘Best for Breakfast’ in Liverpool but also introducing a few cult classics. And like all seventies get togethers, no sit down meal is complete without a tasty pud, so hold on to your hats for Tabac’s all new dessert menu which features a Knickerbocker Glory, Black Forest Gateaux, Sherry Trifle and a lip smacking cheese board!

Our new bespoke coffee blend is ‘Tabac espresso’ – as expected, it is a modern take on a classic. A blend of two distinctive coffees, which combine to produce an espresso with a deep, rich chocolatey body, pronounced toffee sweetness, a complex fruity edge, and a hint ofbittersweet cocoa at the finish. It’s well balanced and combines beautifully with milk, where it adds punchy caramel, smooth milk chocolate notes and gets even sweeter. Produced in Liverpool by Neighbourhood Coffee, the cities first speciality roasters.

Café Tabac is open 7 days a week from 9am – 11pm (Under current government guidelines). Usually close at 1am.