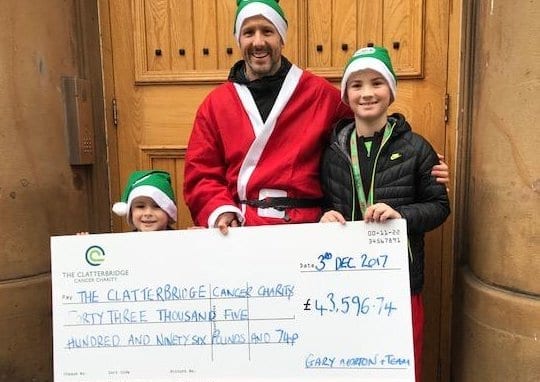 The 5k course round the city was a relief for Gary, 43, who completed 26.2 miles every day for a month, finishing his marathon challenge on 29th October at the hospital in Wirral where his mother in law Gillian Walker is being treated.

Gillian, 62, from Wigan, is receiving immunotherapy treatment at The Clatterbridge Cancer Centre NHS Foundation Trust after being diagnosed with skin cancer four years ago that spread to her liver and lung. She is responding well to treatment and Gary was so inspired by the dedication of staff he decided he wanted to do something to help. 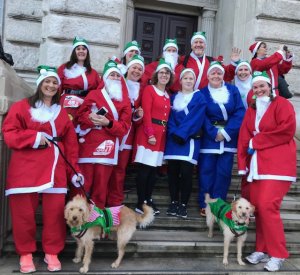 Many of his marathons were run from his home in Rossendale, Lancashire, to work in Wigan. He wasn’t deterred by the 3.30am starts and also fitted in marathons during working trips abroad.

Handing over the cheque, Gary said: “The work that goes on at the hospital is vital and I wanted to do something to help with care and research.

“There were tough days but I had a great support team around me. The thought of what we were trying to achieve kept me going.”

Gary was part of a 25 strong team running for The Clatterbridge Cancer Charity at the Liverpool Santa Dash. He was joined by sons Dominic, 11, and five year-old Albie who ran the Mini Dash.

Wearing green hats for Clatterbridge, the team included dogs Bailey and Maisie, as well as staff and fundraisers. 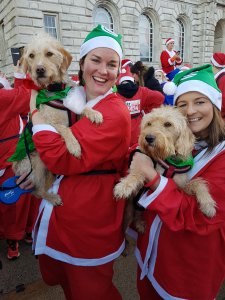 Jeni Nugent, Fundraising Manager for The Clatterbridge Cancer Charity, said: “It was really kind of Gary and his family to run The Liverpool Santa Dash for us this year, particularly after all the running he has done for the charity already.

“We are in awe of the challenge he completed and the amount of money he has raised. It will go a long way to helping us transform cancer care for people in the region.”

The Clatterbridge Cancer Charity is working to raise £15 million towards the building of a new specialist hospital in Liverpool and improvements to the Wirral site.

If you would like to take on a challenge or make a donation, you can contact The Clatterbridge Cancer Charity on 0151 556 5566 or see www.clatterbridgecc.nhs.uk/charity/home