Meet the artist behind the huge Shenanigans mural which pays homage to Liverpool's Irish heritage - The Guide Liverpool
Contact Us Advertise with The Guide Our Video Services Follow us:

Graphic artist Calum Medforth has paid homage to the city’s Irish heritage with a 100-metre square mural on the side Shenanigans pub.

26-year-old Calum Medforth from Formby has spent several weeks turning the side wall of a well-known Tithebarn Street pub into a massive work of art, showing the strength of the bond between Liverpool and Ireland and the shared history of the two.

“I really enjoyed working on it,” he says. “It was quite challenging, and there was quite an intense brief to fulfil. But to create something that will live in the city and be seen by so many people for so many years feels great. 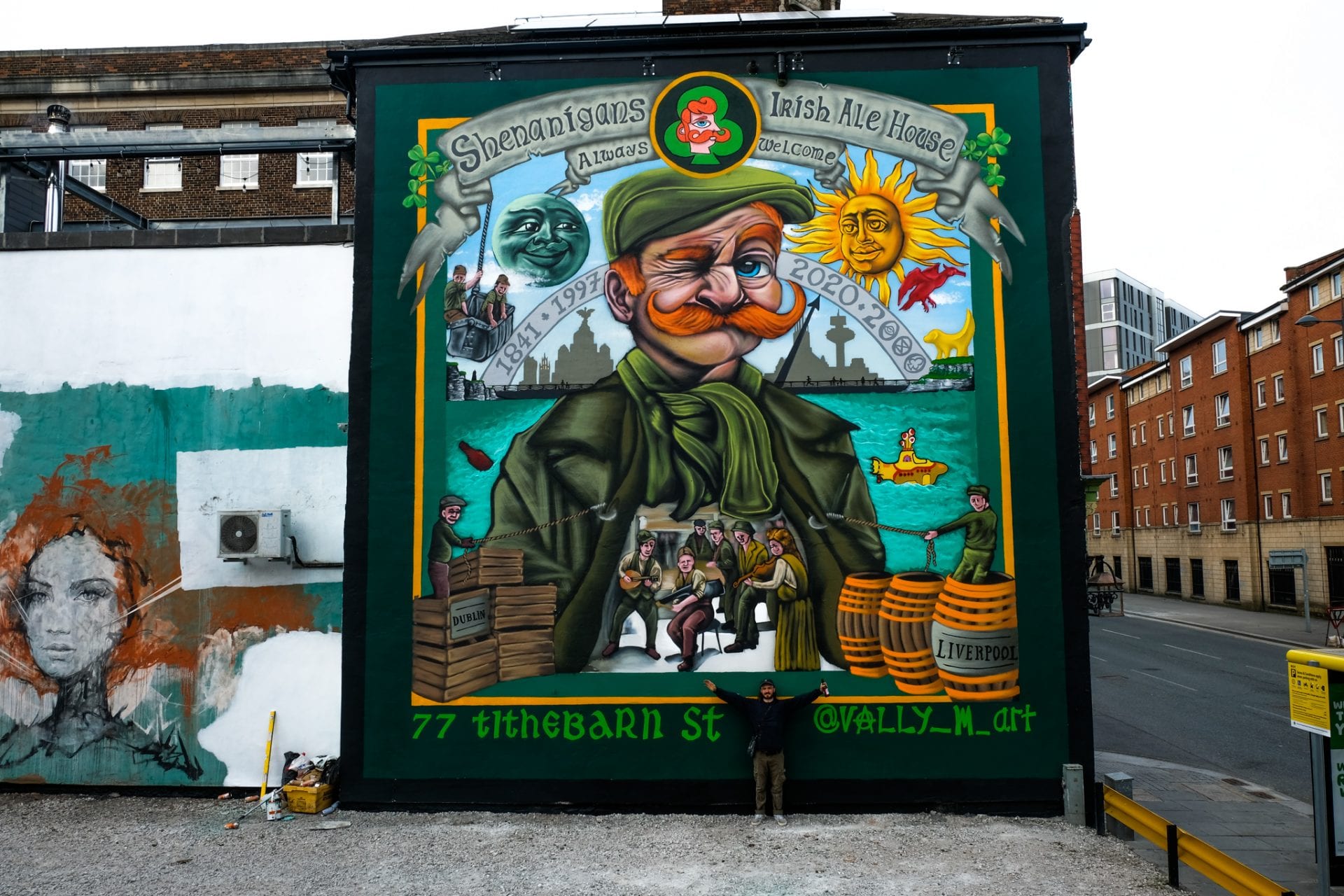 “It’s already made a lot of people happy.”

Calum, who completed work for Ten Streets Liverpool’s market, discussed the idea with  Shenanigans, aiming to create something that connected Liverpool and Ireland and depicted the past as well as the present – and future.

“The mural is on the Liverpool sightseeing tour so it was important that the vision was met,” adds Calum. “There had to be a reference to music, to the history, but it also had to be thought-provoking and fun, and show the passage of time and the character of Shenanigans itself.”

MORE - 14 unforgettable reasons why we miss M&S Bank Arena, and the videos that prove it

The tallest – if not the widest – mural he’s created so far, Calum spent four weeks planning the work which includes the following dates:

1997 – when the pub became Shenanigans

And an indiscriminate date showing how the history will love on long into the future.

The Liverpool Skyline is there along with the people who have made the city great. 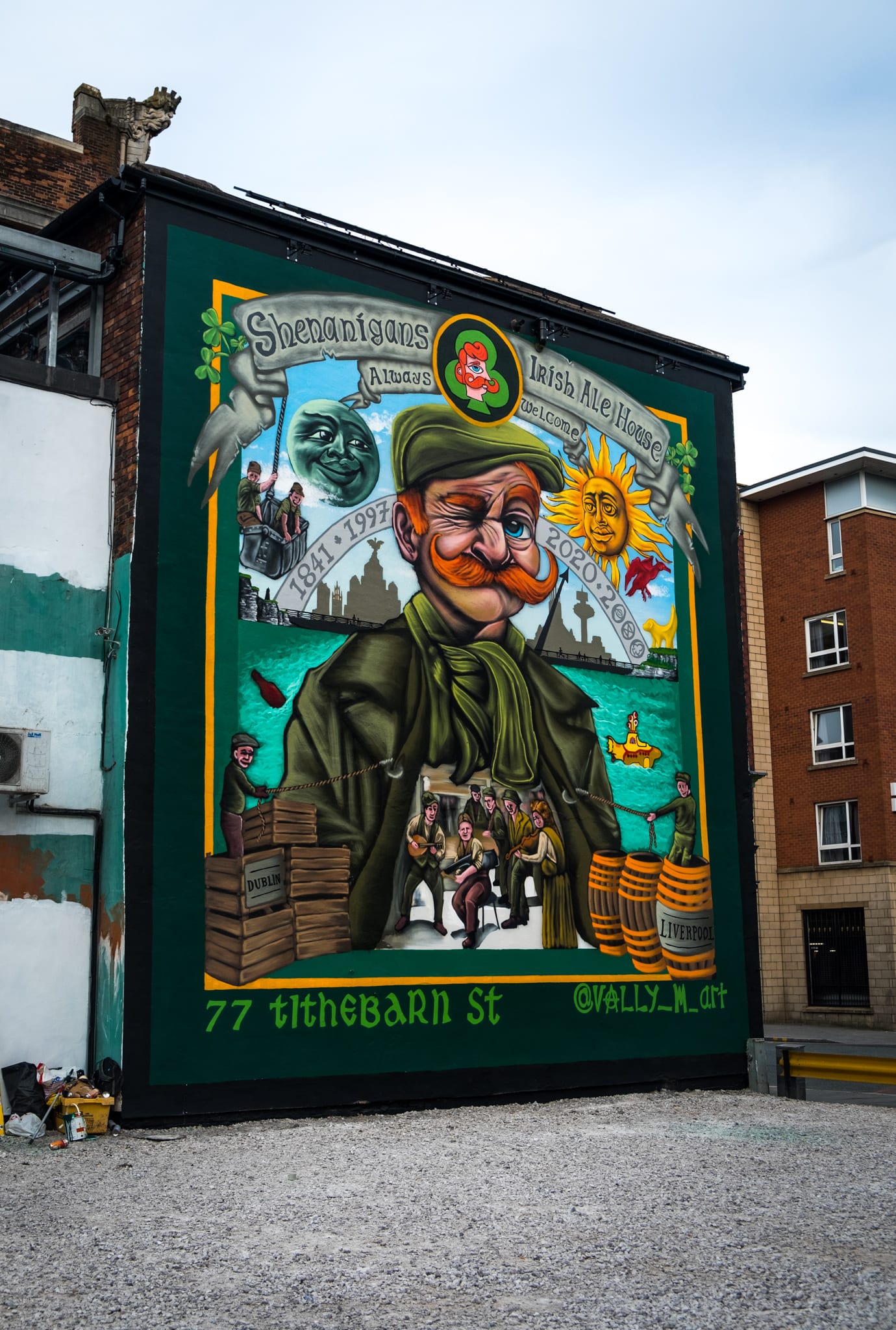 One of the main features of the mural is a Irish gentleman with a gleam in his eye and a red moustache, perhaps one of the first to come to the city before the Irish Famine (there was already an established Irish community here) or afterwards.

Irish settlers dominated the docks, helping the city to progress; employed as ‘carters’ carting tobacco between the port and private warehouses, ‘lumpers’ loading and unloading ships’ cargo and even helping to construct the docks. More found work as stevedores, sailors and ships firemen too.

And the growing Irish community begin to establish its own cultural centres and associations, so there was always plenty of Irish music and dance. 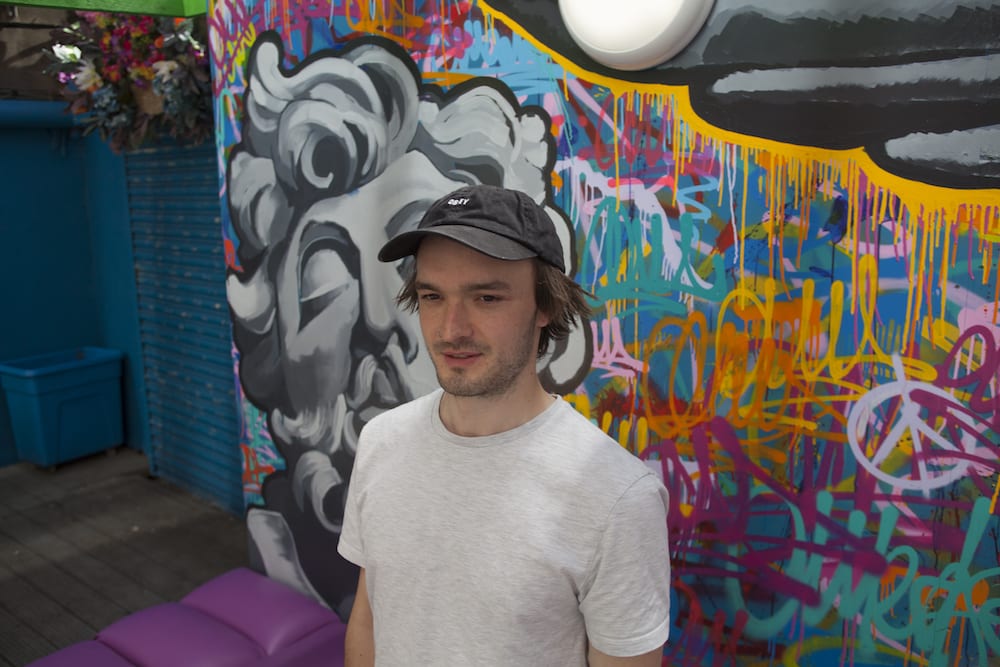 “I mostly paint portraits so I wanted someone to feature as a main part of the portrait and he is inspired by imagination, but influenced by history. To me he is a dock worker who’d have been around at the time the pub was built, and where manty Irish immigrants would go drinking, but there’s also a link with The Giants because of his size in relation to the rest of the features,” says Calum.

“There’s a yellow submarine and an Irish band, both links to the music of the city; as well as the Superlambanana.

“There’s a sun because the pub used to be called The Rising Sun, and, in the banner, the pub’s motto, Always Welcome, as much a sign to people visiting the city as to the customers going into the pub.”

These are the hidden treasures of Liverpool’s Baltic Triangle ?https://t.co/lcMm8CVPpn pic.twitter.com/RdM73wXZvZ

Calum continues: “I love it whenever I get to do a mural because I have to do a lot of research and so I learn so much more about places. I was aware of course of the history of Liverpool and its links with Ireland, but perhaps not how strong those links were – or still are.

“The mural is a symbol of that but I wanted it to be a work that people can enjoy and there are lots of different elements so people may see something different every time they walk by.” 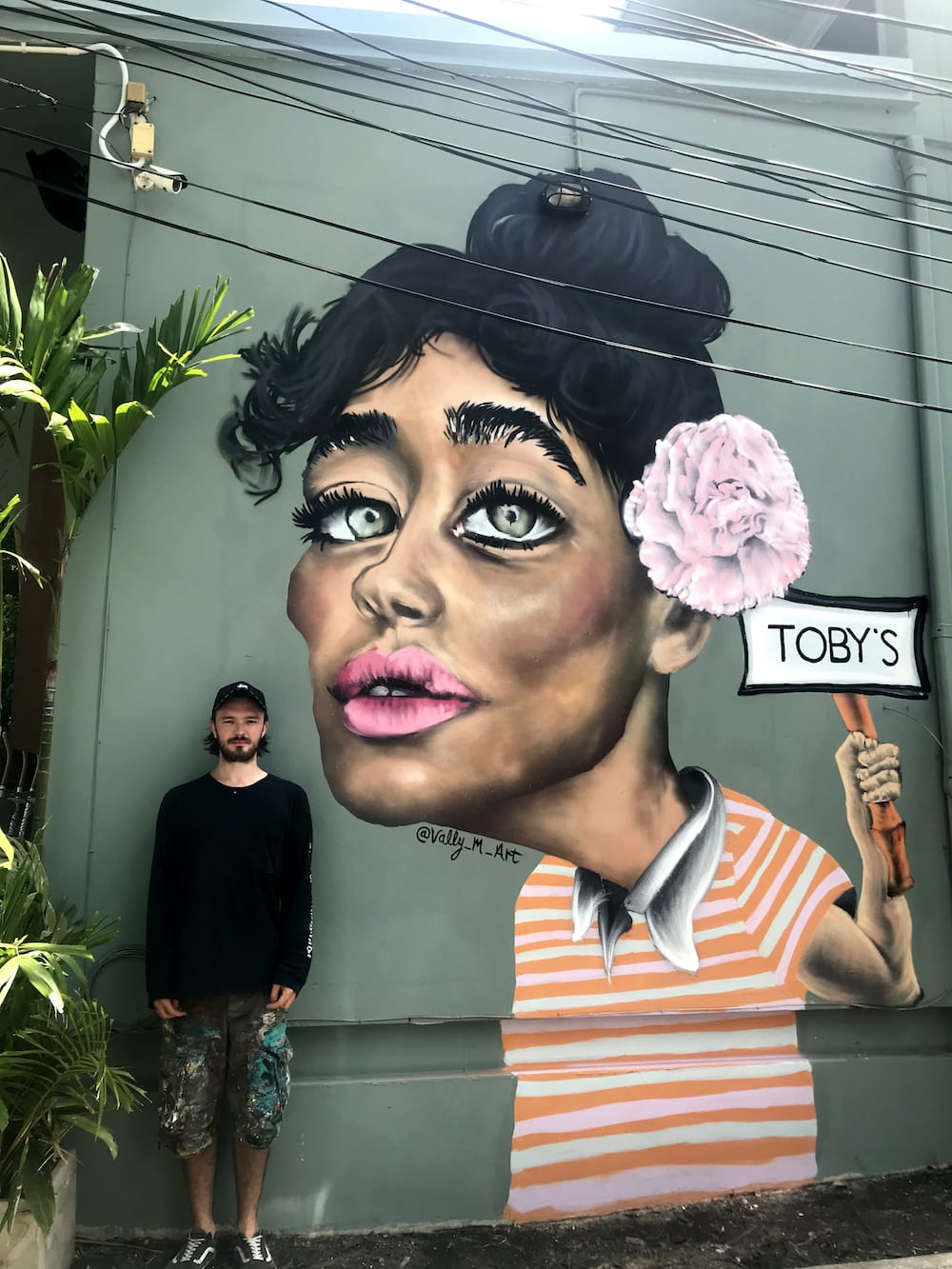 Despite having painted on the streets and, occasionally, murals for businesses, painting murals wasn’t what Calum had in mind for a career when he studied graphic art and illustration at John Moores University, but he’s delighted with the direction in which he is now heading.

A chance commission for a French restaurant in his native Formby at 18, has led to many more in Merseyside, as well as London where he lived for two years, and across the world, including Southeast Asia and America.

“There are two buildings near Shenanigans where I would love to paint and my ambition is to go back to America where I spent some time on a project teaching students mural painting, and this time doing more of my own work. 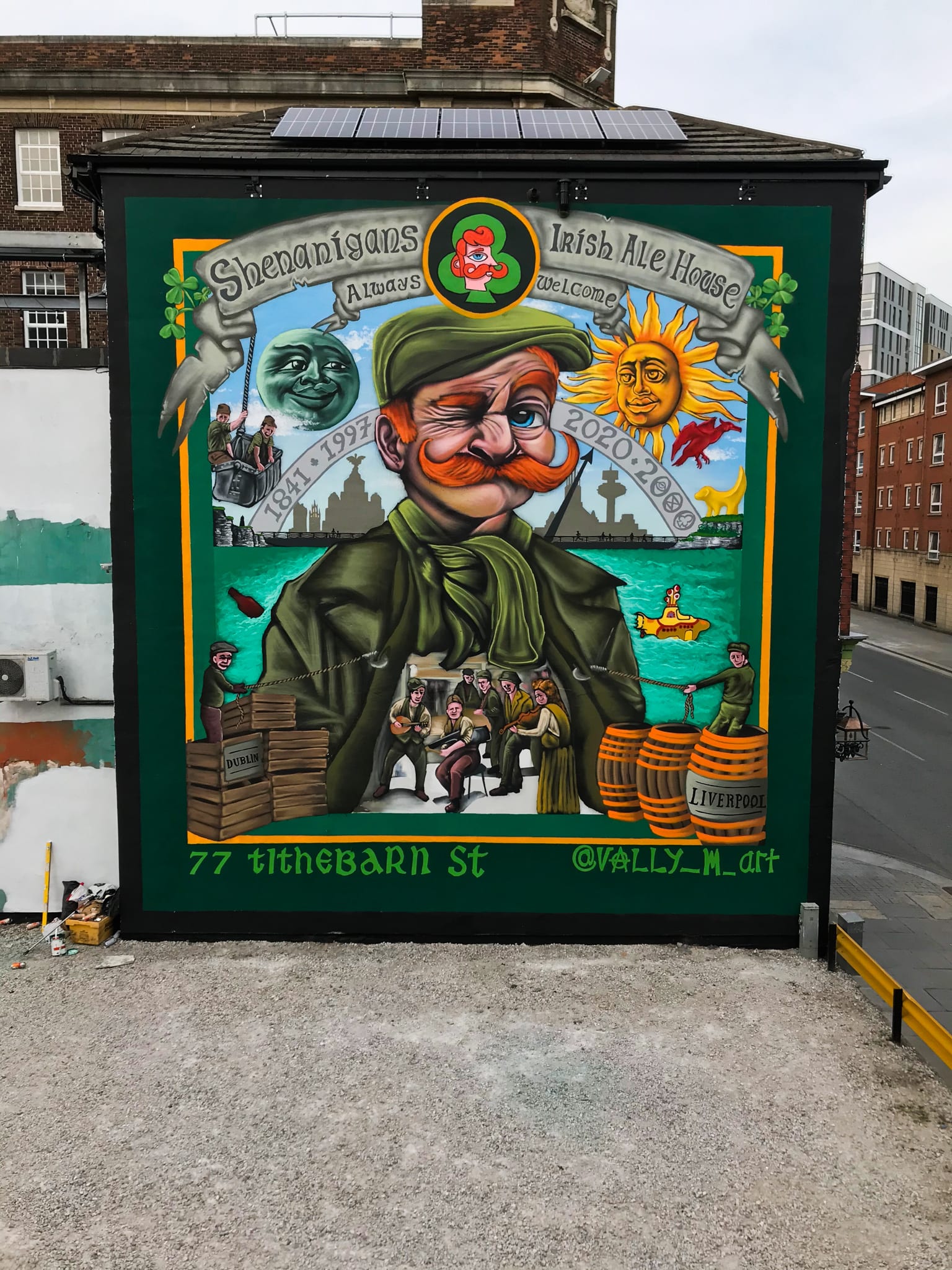 “It’s not the career I’d imagined but I love it. I love large pieces and how, when you’re up there painting, you can zone in and forget about anything and everything else.

“And I’m really proud of the work I’ve done in Merseyside, not least at Shenanigans, which will hopefully live on for years after me.”

Find out more about Callum Medforth here and Shenanigans here.