Meet the volunteers who are creating a nature reserve on park land they saved from development - The Guide Liverpool
Contact Us Advertise with The Guide Our Video Services Follow us:

Acres of Calderstones Park which were saved from development by campaigners are being transformed into a beautiful nature reserve.

Liverpool Open and Green Spaces CIC and Friends of Harthill and Calderstones Park successfully blocked plans to build housing on the Harthill estate land at the beginning of 2019.

Now a team of volunteers is transforming it into a nature reserve, which features a wildflower meadow, new varieties of trees and ponds.

The project, which has received £20,000 from the People’s Postcode Lottery, covers four-and-a-half acres of the park near to Calderstones School.

Now the group aiming to secure additional funding and hopes to be able to complete planting and landscaping of the site and hand it back to the park to be opened to the public by next spring.

The nature reserve will return valuable extra green space to the city which has been out of use for almost 30 years.

Liverpool’s renowned botanical collection was moved to greenhouses on the land in Calderstones Park in 1964 after the greenhouses in Wavertree were destroyed by a bomb in WWII. They were at the centre of a dispute with the then Militant-run city council which resulted in 15 of the 16 greenhouses being bulldozed in the mid-1980s.

“Only one still stands, the Harthill vestibule,” explains Caroline Williams from the Friends. “After the others were demolished, the area was used as a council depot until it was cleared to make way for the proposed sale to Redrow.

“After the High Court ruling to quash the planning permission, the pastures where the horses were obviously had a use, the stables had a use, the miniature railway had a use – the only part of the jigsaw that didn’t was the old depot.

“We offered to go in and tidy it up and after about a year we asked for permission from the council to apply for a Postcode Lottery grant and develop the site into a nature reserve.”

Volunteers faced the challenge of the site’s former use before they could begin planting. The greenhouses had been built on concrete bases, so much of the funding needed to be spent on bringing in diggers and excavating small areas of concrete so they could plant trees.

Advice from Richard Scott, Liverpool-based Director of the National Wildflower Centre at the Eden Project and founder of Scouse Flowerhouse, helped them to plant a wildflower meadow on a large area of the site.

The expert, who was overseen other wildflower meadows across the city, advised that with the right recipe as a base they could actually sow wildflower seeds on top of the concrete. That included 100 tonnes of Mersey grit – sand dredged from the river – and 20 tonnes of chipped stone, laid in a very very thin layer for the wildflowers to take root.

“Wildflowers don’t like rich soil, they like poor soil, so planting them on virtually nothing worked really well,” says Caroline.

“Now we’re going to experiment with growing into different aggregate like chalk and tiles, to create habitats that will attract different types of plants and a bigger variety of insects and pollinators.”

Three quarters of the site is already ‘wilded’ so volunteers are focusing on the remaining area, with plans to plant up the bog garden and create ponds if they get the necessary funding. 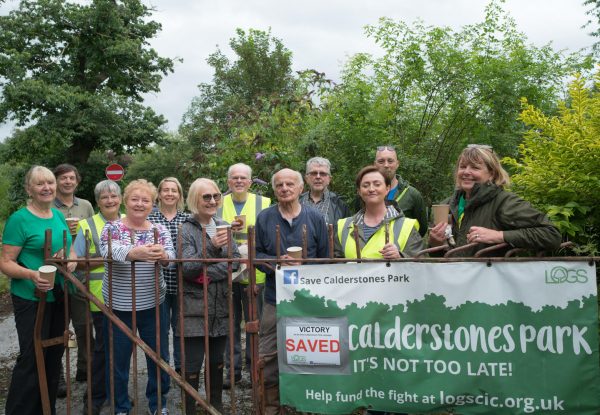 This summer, year 7s from Calderstones Park School helped out with hand-sowing the meadow, and volunteers have planted 130 small trees gifted to them by the Mersey Forest. Hedging has also been requested from the Queen’s Jubilee Fund.

“It’s still a work in progress, but we did have some open days in the summer and when the wildflowers were out it was just so beautiful,” says Caroline.

The Friends have more than 100 volunteer gardeners registered, and on a typical day around 10 to 15 arrive armed to help out. In spring and summer they were tending the area twice a week, although Caroline says autumn and winter will be mostly about rechipping and weeding paths, cutting back and clearing leaves.

“Lockdown really made us appreciate all the green space we have in the city, it’s so important for people’s wellbeing, and we’re lucky to already have as much as we do in south Liverpool.

“This nature reserve will add an extra four acres which should make a big difference and once we hand it over, hopefully early next year, it will become a useable part of the park again and be there for everyone to enjoy.”