Meet the woman behind some of Liverpool's fabulous restaurant window art - The Guide Liverpool
Contact Us Advertise with The Guide Our Video Services Follow us:

For Molly Cotterill, art was a way to pass the days when she was furloughed from her restaurant job.

But, what started out as a hobby, drawing on paper in her own home, has become a very visible second career.

Because the 29-year-old is now in demand from restaurants and cafes around Liverpool to create fabulous artwork on their windows. 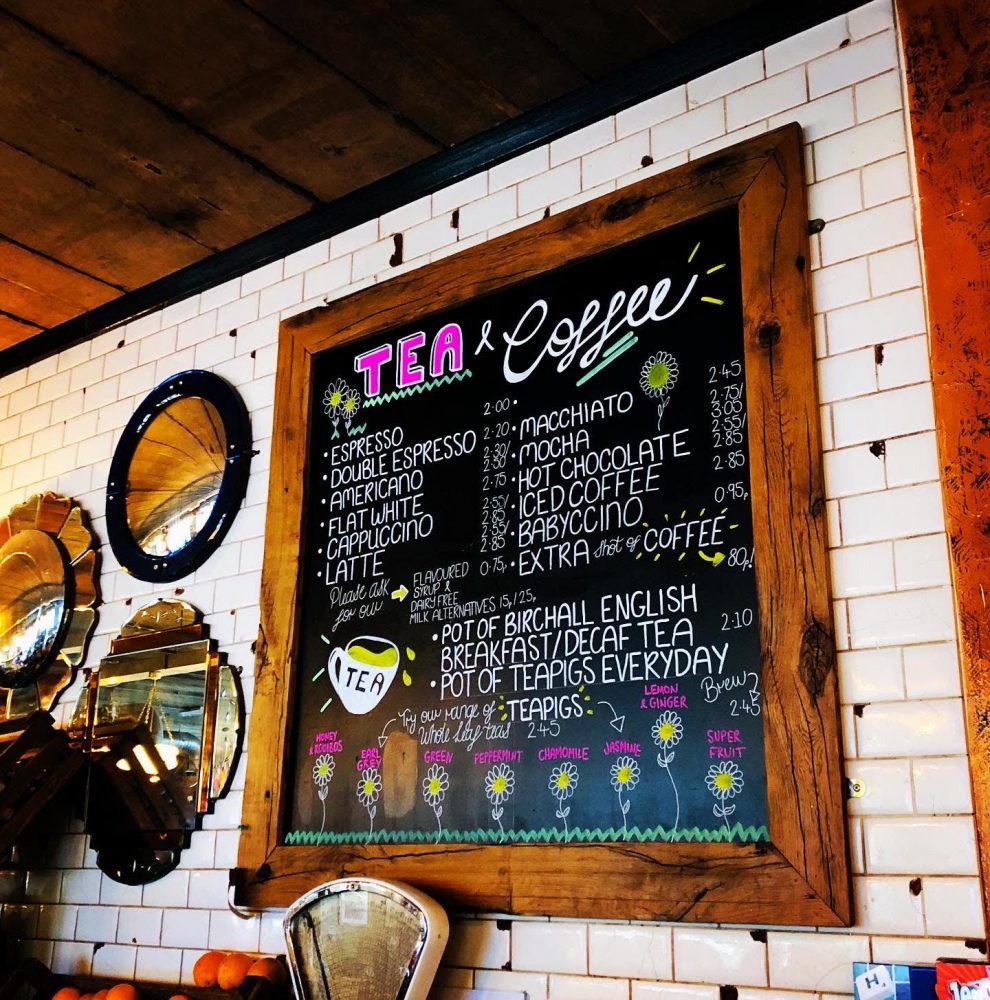 Molly’s bold designs for Christmas, Valentine’s Day and Chinese New Year and other landmark celebrations have become a familiar sight around the city centre over the past year.

“It can be a bit scary because if I’m working on a really busy street, somewhere like Bold Street, then I have people watching me from the inside and the outside, so it becomes almost like performance art,” she says. “But I’ve had lots of great compliments and I’m super-grateful to have the chance to showcase my work to such a big audience.”

Self-taught artist Molly, who works at Brasco Lounge at Mann Island, focused on drawing during the first lockdown.

“I was furloughed so I had all this time on my hands and it gave me the opportunity to draw every day, literally just using pen and paper. I started posting things on Instagram and got really good feedback, then a few friends asked me to do drawings for them, so I was doing that too.

“When I went back to Brasco, they asked me to do some window displays and chalkboards there, really just because they knew I liked drawing. Someone else saw my work and asked me to do their restaurant and chalkboard, I said ‘of course’ and it just spiraled from there.” 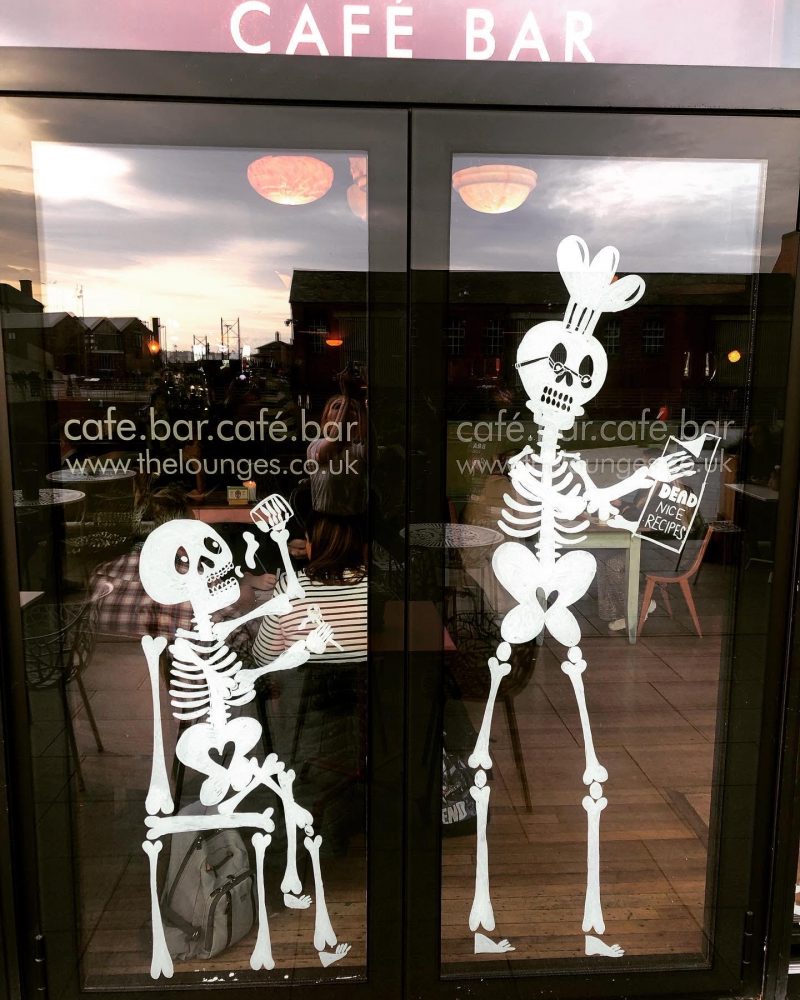 Molly, who moved from Stafford to live in Liverpool six years ago, admits she did find creating artwork on such public display quite daunting in the beginning.

“To be honest I was absolutely terrified when I first started doing it, it was really quite scary for me to go from the comfort of my own home where it was just me, with no-one else watching, to doing something lots of people can see and someone is paying for.

“But I would always get through it and with every job I’d get more confident in my abilities.

“One of the challenges was adapting to the change in scale because I was used to drawing on A3 size so obviously the windows were much larger. I tried a few methods to get my proportions right with it. 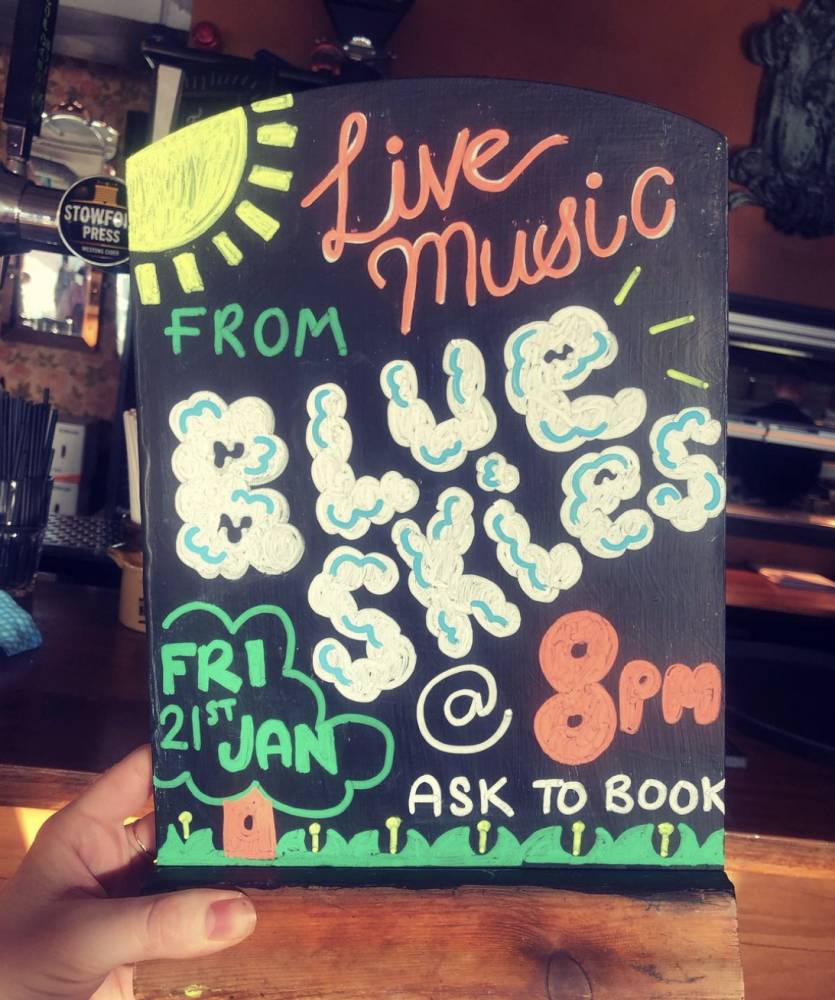 “At first I would take a photo of the window then put that on my iPad and draw out the design on there. For my first windows I used a grid method, so I had massive pieces of tracing paper which I gridded out, then did a draft on that, put it on the window and sketched from it.

“Now I still always take a picture and sketch out the design on my iPad so I can see exactly where I want things to go and how big I want them to be, but instead of the grid can just do it freehand. I’m quite lucky that because once I can see something in my head, my brain can transfer that onto the window so I don’t need the tracing paper anymore.”

Molly creates her windows using Posca pens, which don’t rub off easily, and she’s learned to draw on the inside to make a design which faces outwards.

Businesses contact her via her Instagram, through the Liverpool Hospitality Facebook page or just by stopping her while she’s working to hire her for their own venue.

Each window takes between four and eight hours to complete, so there is lots of time and talent invested in them. 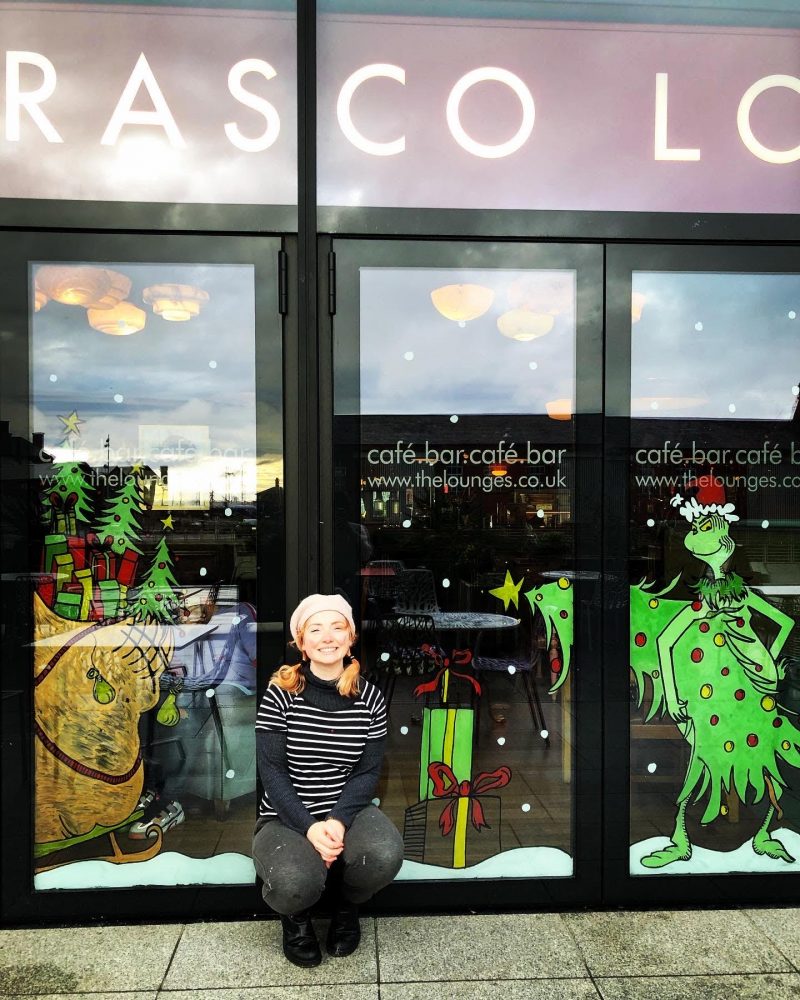 But she tries not to get too attached to her pieces, knowing that quite soon they’ll disappear.

“The longest one I’ve done so far took about eight hours and that was a full Grinch themed window which I did for Brasco at Christmas.

“It is kind of sad when they get scrubbed away, because it does mean so much to me to do a good job, but actually the art has been there and had its time and when it’s gone it makes way for new things. So then I can get really excited to plan my next project for the space.”