Meet the young Liverpool entrepreneur who's started a successful lockdown candle business, with a difference! - The Guide Liverpool
Contact Us Advertise with The Guide Our Video Services Follow us:

When Covid hit last spring, make-up artist Elle Ball found herself facing an empty diary of cancelled appointments and an uncertainty about when her business would ever restart.

So instead, she decided to launch a new business based on the latest interior design trend.

Now the 24-year-old’s eye-catching wax designs have proved so popular that there’s a batch of bums on its way out to Beverly Hills next week and extra-large versions are heading on a secret mission to one of the UK’s biggest TV shows. 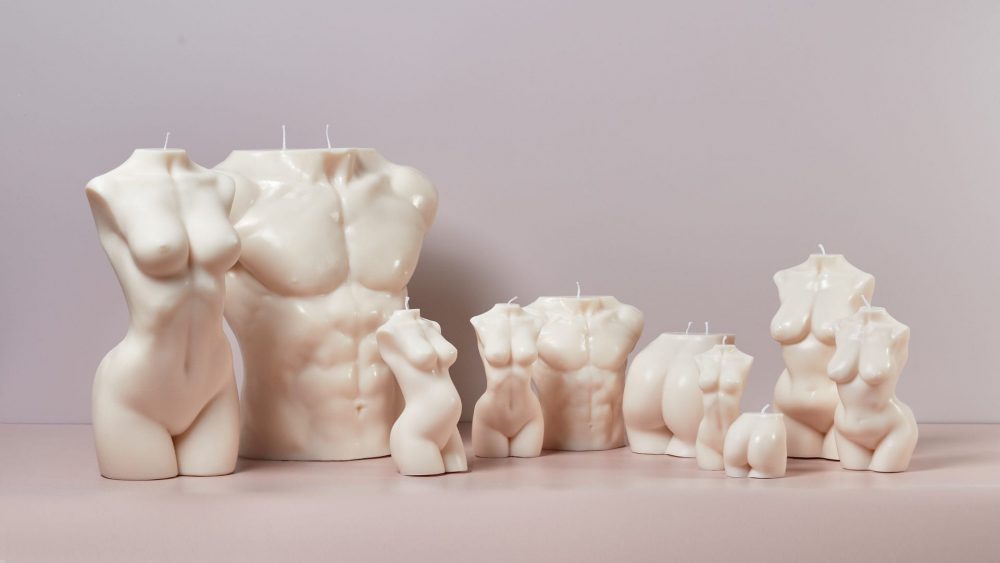 The idea for Melt My Nudes first came about last summer after Elle began making aromatherapy candles to help out her mum, Sharon Hilditch, who owns Crystal Clear on Rodney Street.

“Before Covid, I’d been working as a make-up artist for six years, mainly doing bridal, but then obviously all of that stopped,” she explains.

“My mum was having problems with stock because of a combination of Covid and Brexit, so she asked me to help out and make the aromatherapy candles for her. 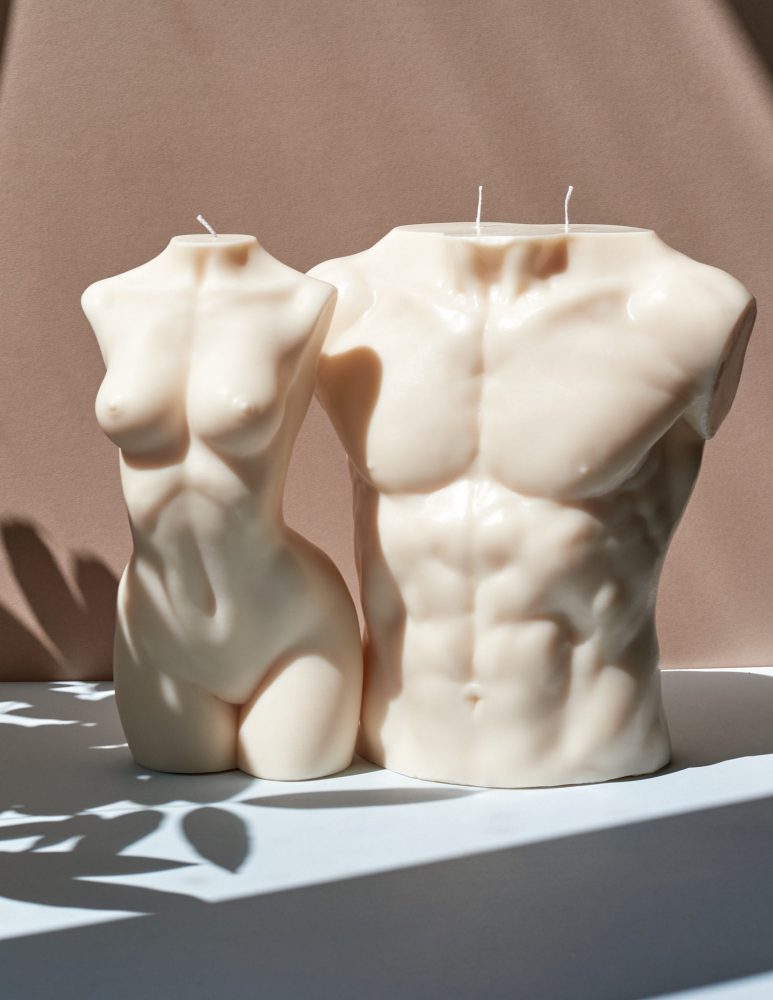 “I really liked doing it and I love working with her, but I’ve always worked for myself so I really wanted to do my own thing.

“There were so many candle brands out there and I was struggling to find a gap in the market until I came across the body candle moulds. There are other companies out there doing them, you see them on Instagram, so I started to look for ways to do it differently.”

With four initial designs – Serena, the female nude, Adonis the male torso, Gigi the bum and Maya the pregnant woman – Elle began working with suppliers to create something unique to her business.

“I found my own suppliers and got them to make the moulds in a massive version, so the new ones I’m launching next week are actually 25cm high,” she says. 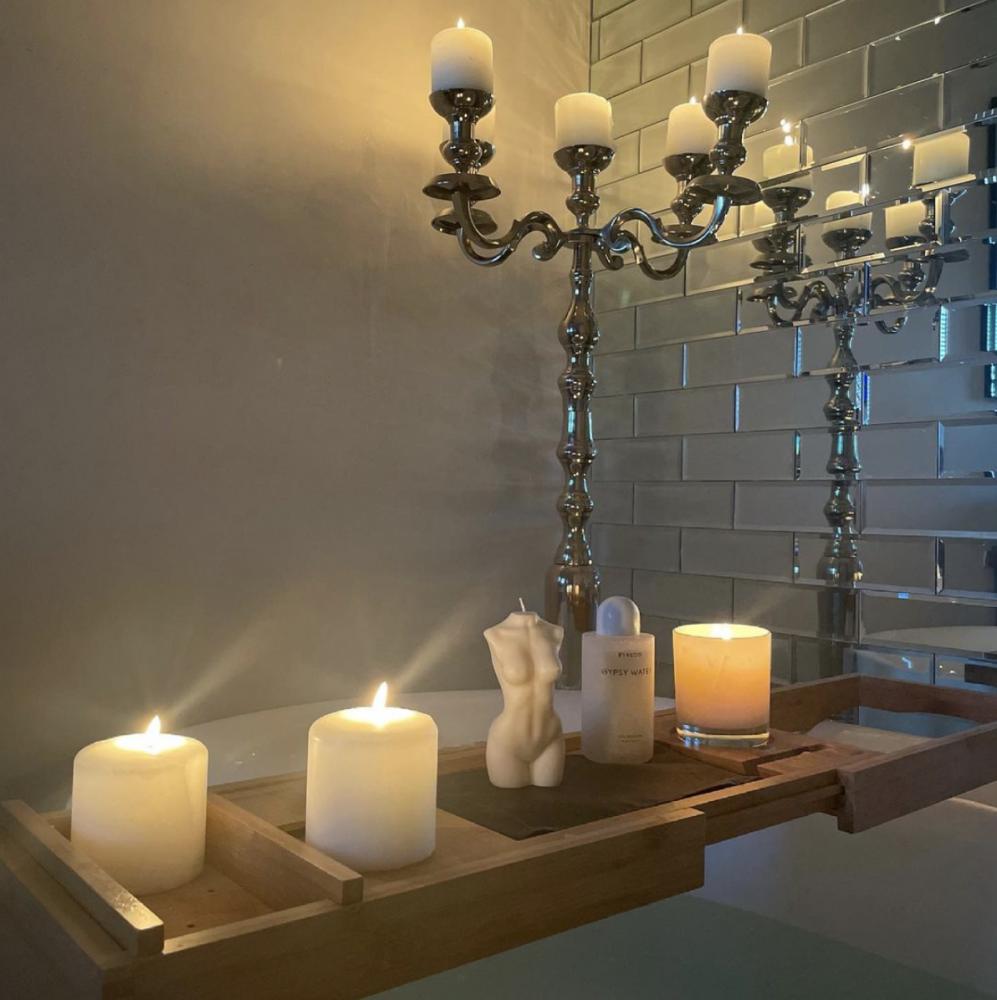 “It might not sound that huge, but once you factor in the width too – especially of a male torso – then it really is because it’s solid soy wax.”

And it’s not just the size that matters, it’s the weight too. The large Adonis weighs just over 4kg compared the to weight of a standard candle which comes in at around 250g.

Having launched just a few months ago, Elle is still making all the candles in her kitchen at home. 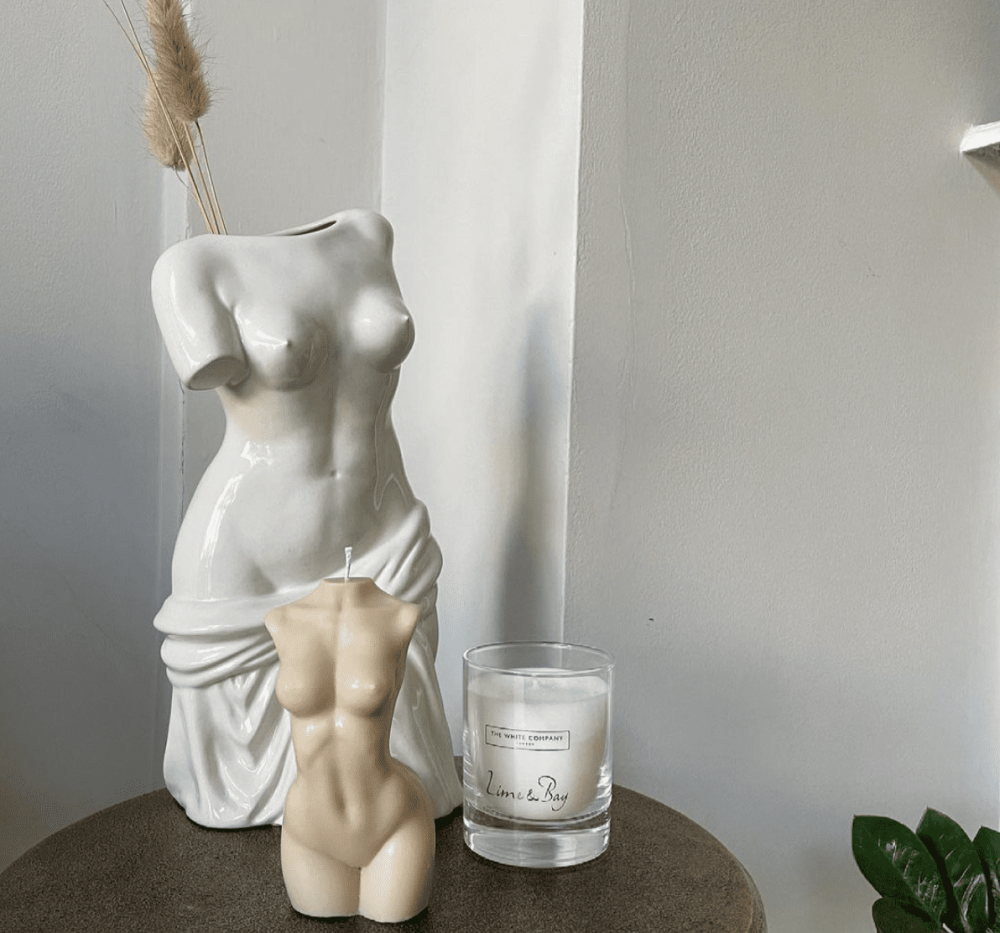 With sizes now ranging from the mini, which is 10cm tall, to the large 25cm, the process of creating just one can take up to a couple of days.

“The large ones have to be left for about 36 hours to set, otherwise they go soft in the middle,” she says. “If they’re taken out of the mould too soon they’ll collapse and all that wax is wasted so with prepping, pouring and setting, then refining, they take two days to make.” 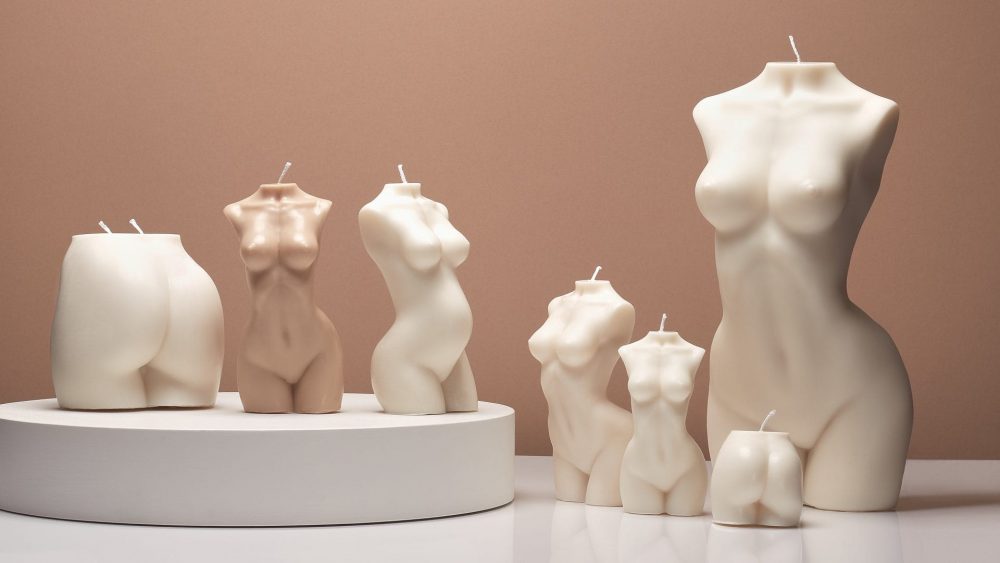 Elle has just added a curvy female nude to her range, the Thea, which she worked on with designers to make as realistic as possible.

But, she stresses, her nudes are always discreet and tasteful – Adonis is torso-only so there’s no extra bits to burn!

The best-sellers so far are Serena, the classic female nude, and Maya which is proving to be a popular and unusual gift for mums-to-be.

Although, says Elle, there’s been extra trans-Atlantic interest in her bums recently.

“There’s a skincare brand in Beverly Hills which is bringing out a cellulite mask for bums so I’ve got a big order of Gigi candles on its way for them,” she adds. 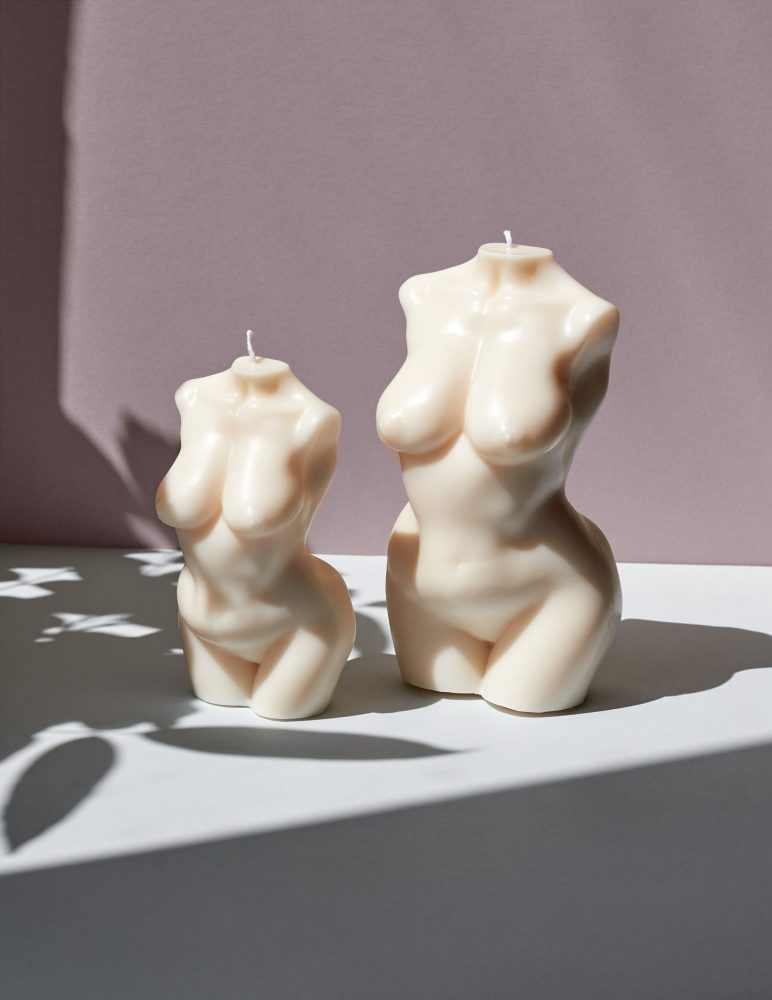 Closer to home, Elle has already won plenty of fans for her designs – although owners can’t quite agree on the burning question … to light or not to light.

“They’re obviously fit to burn but most people do buy them as an ornamental piece,” she says.

“Because of the soy wax and the shape of the nudes they do drip down so I find some people want to keep them perfectly and others really like the look once they’ve burnt down a bit and dripped. It’s down to everyone’s different preferences.

“Nudes are very on-trend in interiors at the moment because they’ve featured in such a lot of high-profile homes on Instagram. 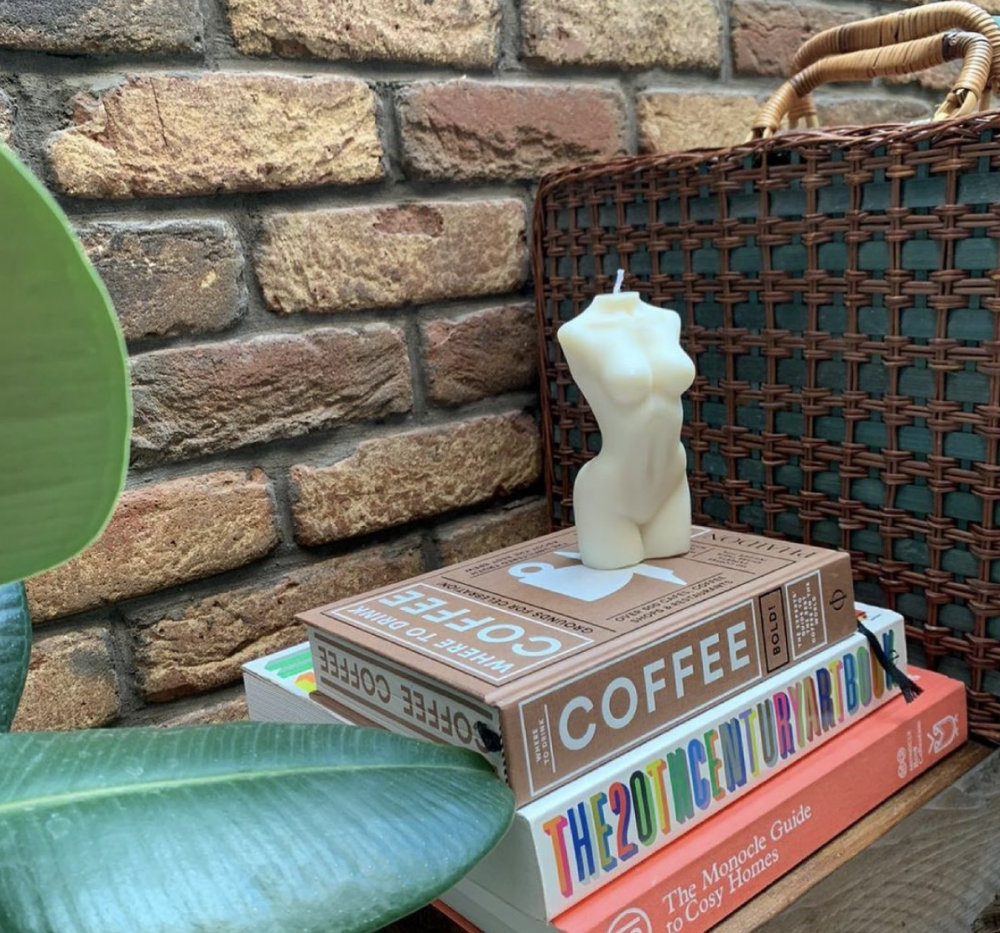 “I think the Anissa Kermiche Love Handles vase was what kicked off the trend and I’ve noticed if someone tags us in a photo, they’ve often got that vase so they’re pairing them together.

“More people are finding out about it and like it. The small ones are a perfect little shelfie piece or for a bathroom or bedside table, and the larger ones are more of a coffee table or dining room piece. It all depends on how big a statement you want to make.”