Noel Gallagher to join Jamie Carragher and more at Football For Change fundraiser - The Guide Liverpool
Contact Us Advertise with The Guide Our Video Services Follow us:

Noel and his band, High Flying Birds, will play a sensational set at the annual fundraising gala to an exclusive audience of footballers, celebrities and business leaders at the event on 22nd September.

The rocker joins host Vernon Kay as well as fellow performers Emeli Sandé and Melanie C at the gala evening sponsored by Swinton Insurance, while Liverpool football legend and Sky Sports presenter Jamie Carragher will be involved in a high profile Q&A with a sporting superstar on the night.

There will also be a major auction aiming to build on the £350,000 already raised by Football for Change, with exclusive prizes donated by Robbie Williams, Sir Rod Stewart, Manchester United, Manchester City and Formula 1.

Gary Lineker is an ambassador too, alongside Steven Gerrard and Brazilian international Lucas Moura.

“It is amazing to have Noel and his band supporting Football For Change by playing at our annual fundraising gala next month. He is a music icon and we’re all looking forward to it.

“This event follows our launch in 2021 which was attended by our patron Sir Rod Stewart. It is going to be a great night.” 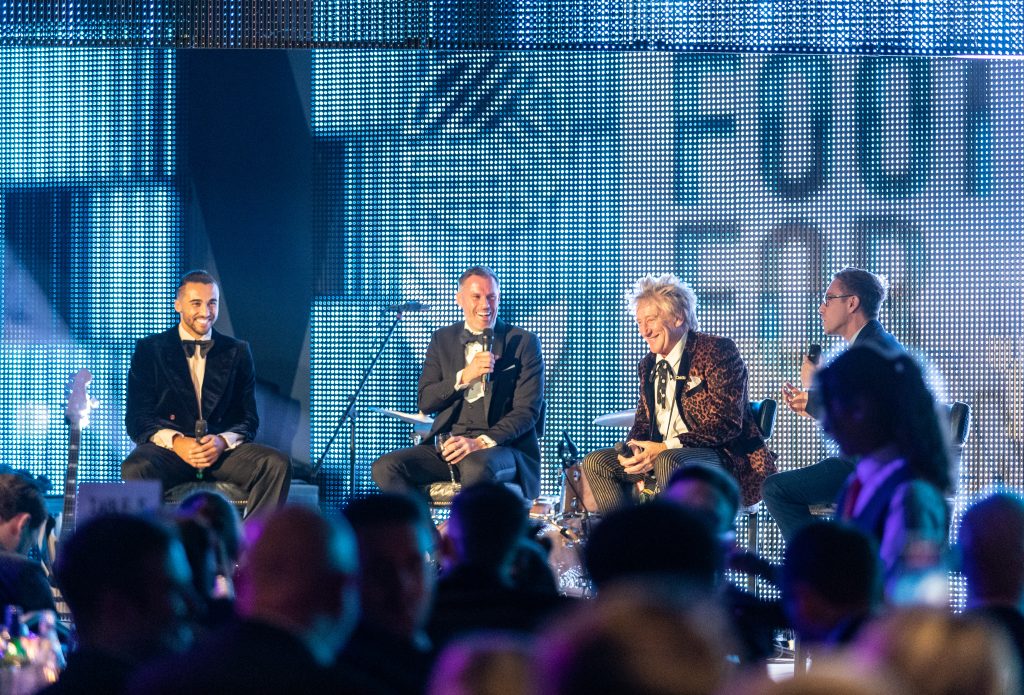 Football For Change gala dinner with Rod Stewart in 2021

Football for Change aims to lift young people from disadvantaged backgrounds out of poverty with life-changing opportunities in education and employment.

The inaugural Football for Change gala hosted in Liverpool last year raised £250,000, before a lunch event secured another £100,000 in March, with performances from Sir Rod Stewart and BRIT-nominated Tom Grennan.

Since then, Football for Change has sent over 40 disadvantaged children to the United States of America on sporting and educational retreats, with grants being distributed to organisations supporting youngsters in the most deprived areas of the country.

“This is a major homecoming for one of the world’s biggest music stars and his support will help improve the life chances of disadvantaged young people in the North West.”

The fundraising gala is being backed by Swinton Insurance, DAM Health, Together Money and Watches of Switzerland.

You can find out more about how to get involved on the website here.