Photographer appeals for help to track down dad and lad in super-cute LFC parade picture - The Guide Liverpool
Contact Us Advertise with The Guide Our Video Services Follow us:

An amateur photographer has appealed for help to track down a dad and lad who she captured in a super-cute picture at the LFC parade.

Emma Hawes spotted a young boy sitting on the man’s shoulders, half asleep and resting on his head, as she waited for the Reds bus to arrive on The Strand.

But the pair then disappeared into the crowds and now Emma is hoping to find them to give them a special memento of the day.

She was standing outside Capital FM with her own children Summer and Freddie when she saw them and couldn’t resist grabbing her camera and getting the shot.

“Usually with street photography I try not to show people’s faces and because of the event being what it was, I was mostly photographing the crowds,” she says. “I didn’t specifically photograph anyone other than a couple of people on traffic lights and this guy. I saw what I assume was his son nodding off asleep on his head and I thought, I can’t not take that picture, it’s so cute.

“I don’t think the little boy was fully asleep, he was just dozing off, and he had this lovely smile on his face. He was just so chilled, and I thought after all the negativity around what had happened at the final it was just nice to see something so positive and remember why we do actually love sport and football.

“They weren’t standing near where we were, they were actually walking past us, so it was just lucky that I managed to get the picture. It was still quite early on – we got there about midday and this was only about an hour later – but don’t know where they ended up going to watch the parade because I never saw them again in the crowds.” 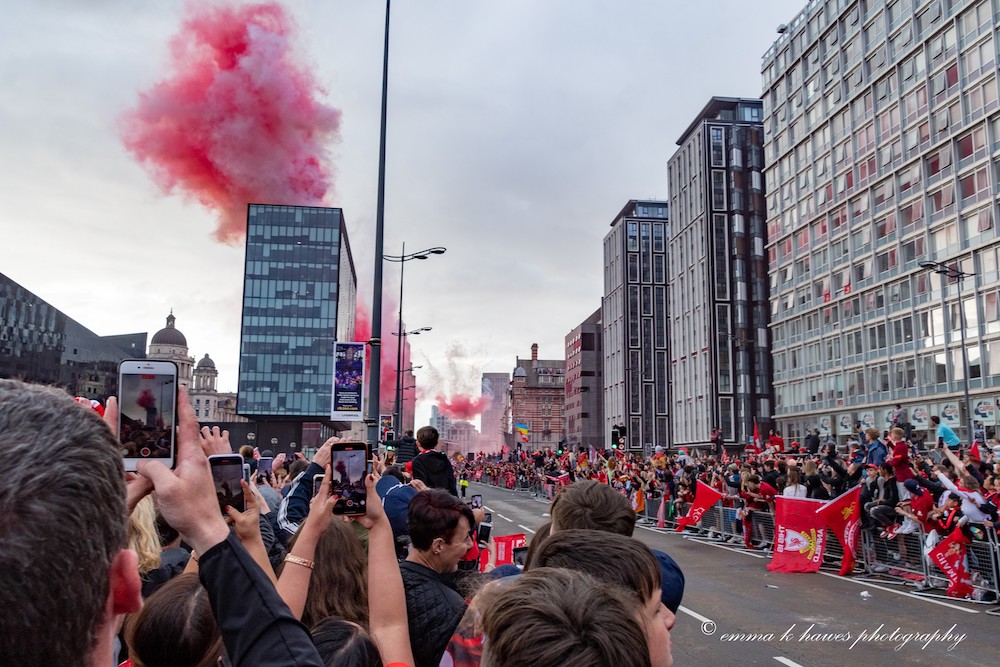 Emma, who’s from Formby originally but now lives in Wigan, says after spending hours capturiing crowd shots while they waited, she actually only managed to take a few as team bus went past.

“By the time the bus actually got to us I must have only got about three pictures of the players, the rest of the time it was just crowd pictures, but I took lots of those.

“I haven’t been through all of them yet, I’ve got about 200 to go through, but when I got home on the Sunday night there was a couple that I remembered taking that I really liked. I just wanted to have a look at those and see if they were as good as I thought they were when I took them, and this was one of them.

“As soon as I saw it I thought, if that was me I’d want a copy, because I think it really sums up how being a fan starts – going to the football with your dad or your mum or your family, and then it just goes on from generation to generation.”

After taking up photography more seriously a year ago Emma, who is a Reds fan herself, is currently building her portfolio of mostly sports images.

“I do a lot of horse racing, that’s probably my favourite sport to cover, I go to meetings and stable visits, but I love all sports and I take my camera with me everywhere just on the off-chance I might catch something cool.

“That’s what really got me into photography, it’s capturing those moments, something a bit different or a bit special.”

Since she put the photo on her social media, 34-year-old Emma says she’s been contacted by other fans, telling her about their own treasured keepsakes.

“I’ve had people reply sharing pictures of themselves at their first time going with their kids to matches and they’ve said they’re their favourite pictures so I hope I can find this man and that he feels the same about this photo.”

If anyone recognises him, or if it’s you and you’d like a copy, Emma can be contacted on email: [email protected] or via Twitter @emmakh46