Radio City Celebrates Freedom of the City Award & 44 years as Liverpool's daily soundtrack - The Guide Liverpool
Contact Us Advertise with The Guide Our Video Services Follow us: 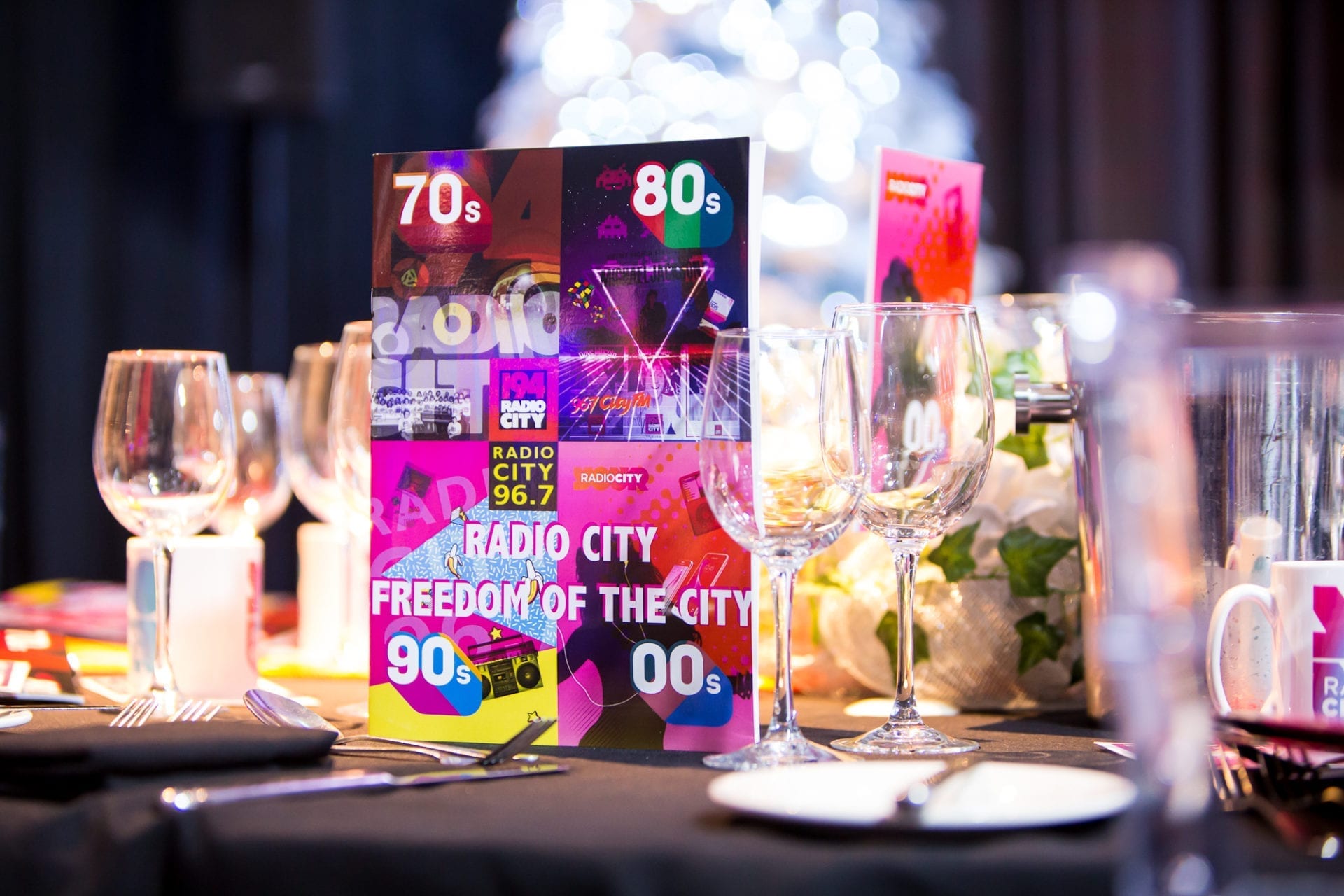 From its Stanley Street beginning to the top of the tower, Radio City is recognised with prestigious accolade at a glittering ceremony at Hilton Hotel.

Radio City was awarded the Freedom of the City on Thursday 15th November 2018 at Hilton Hotel Liverpool with staff and presenters, old and new in attendance. The honour, the highest accolade bestowed by the local council for those responsible for exceptional service to the city, recognises Radio City’s 44 years as the soundtrack to life in Liverpool. 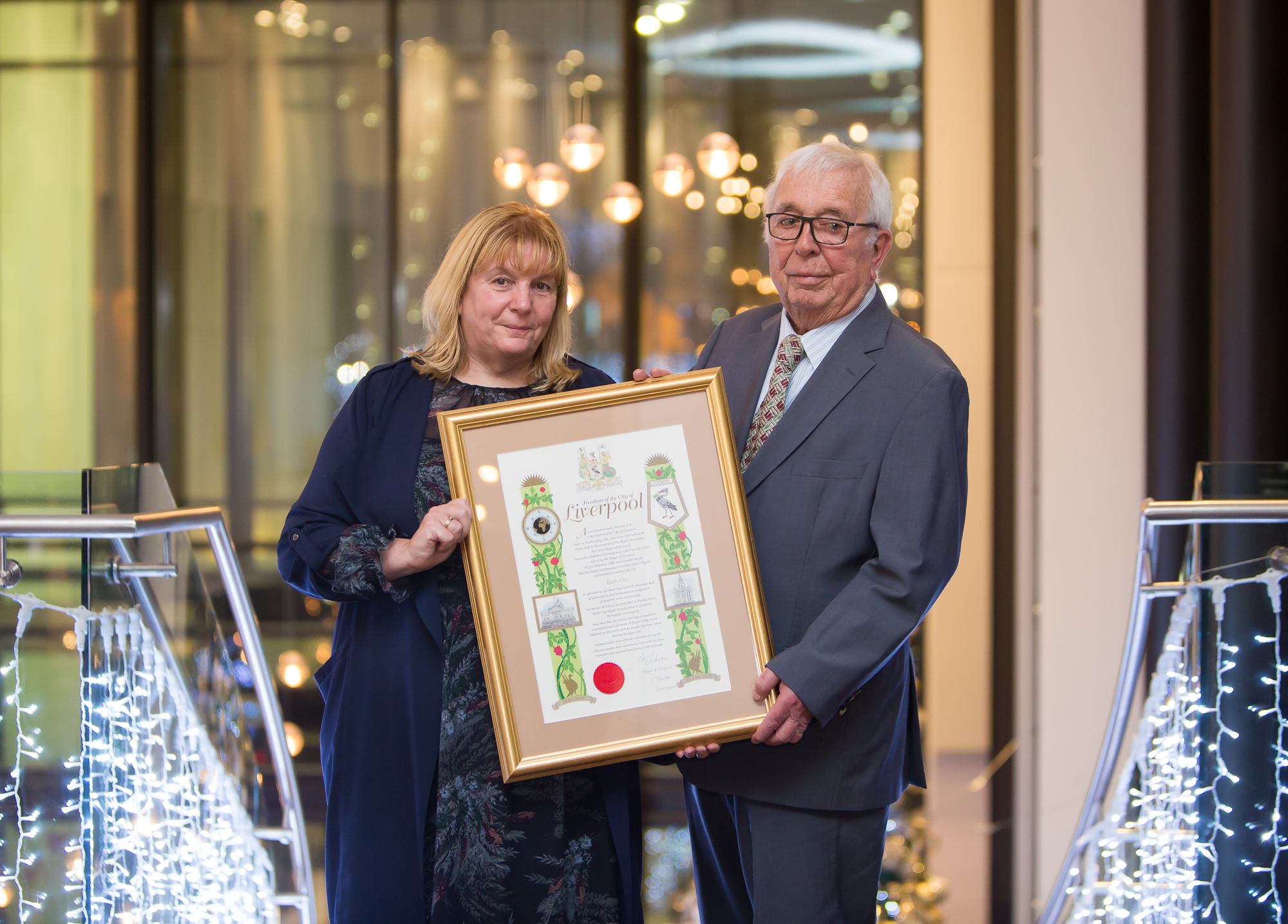 In October 1974 from its birthplace in Stanley Street, Radio City began broadcasting to Liverpool, Merseyside and beyond. Since that date, the station has kept its audience entertained and informed, 24 hours a day.

Radio City has reported on the events and the people that have made this city the place it is. A trusted voice; a best friend, a shoulder to cry on. This is a station that continues to cheer with the fans, champion the city and stand proud with its people. 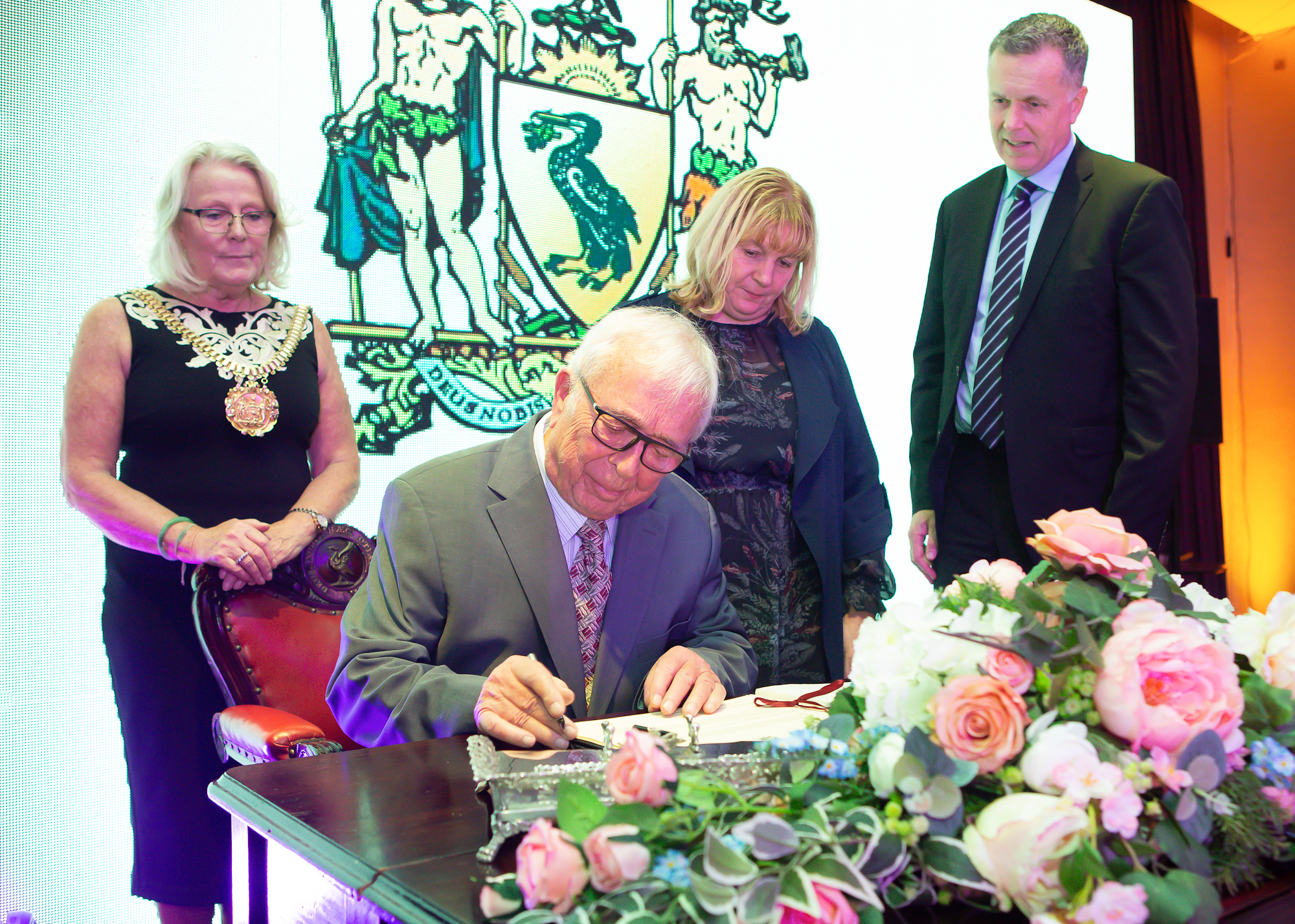 Many famous faces we know and love on local and national tv and radio, began their careers at ‘City’. The likes of comedian John Bishop, LFC TV’s Peter McDowall, Richard Keyes, Pete Waterman and of course, for 13 years, our very own Jay Hynd, he said: “Being surrounded by all my former colleagues who are now some of my closest friends, celebrating an incredible 44 years was really heart warming.

“Radio City will always be a massive part of my life the same as all those who’ve also grown up with the station as the soundtrack to their daily lives.” 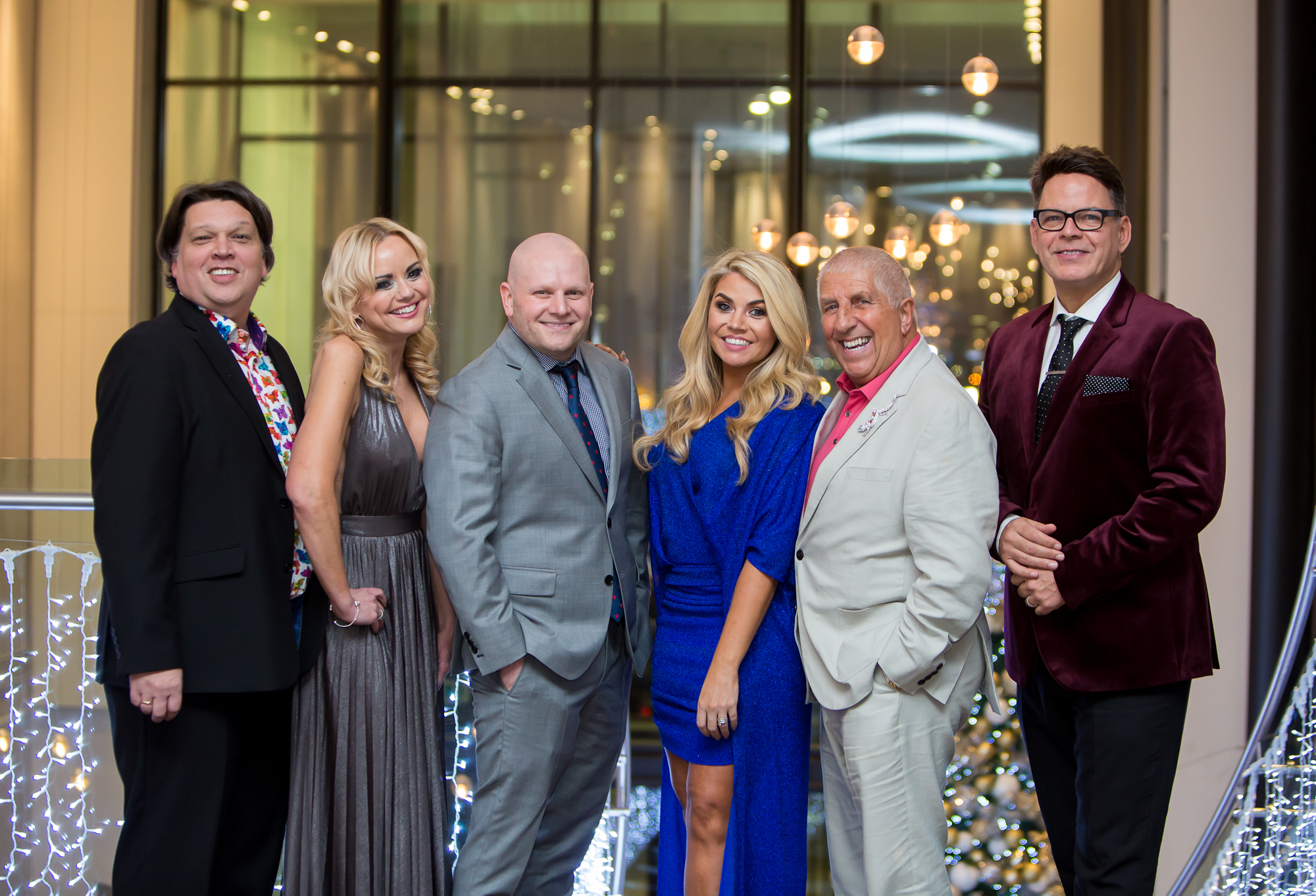 Guests were treated to a trip down memory lane as presenters and colleagues took to the stage to introduce the decades of Radio City past. Soprano Danielle Thomas performed stirring renditions of Adele’s ‘SkyFall’ and Coldplay track ‘Run’. Carol Clare from Radio City’s charity partner, Cash for Kids spoke passionately about the relationship and its vital work in the community, before Pete Price hosted a silent auction. 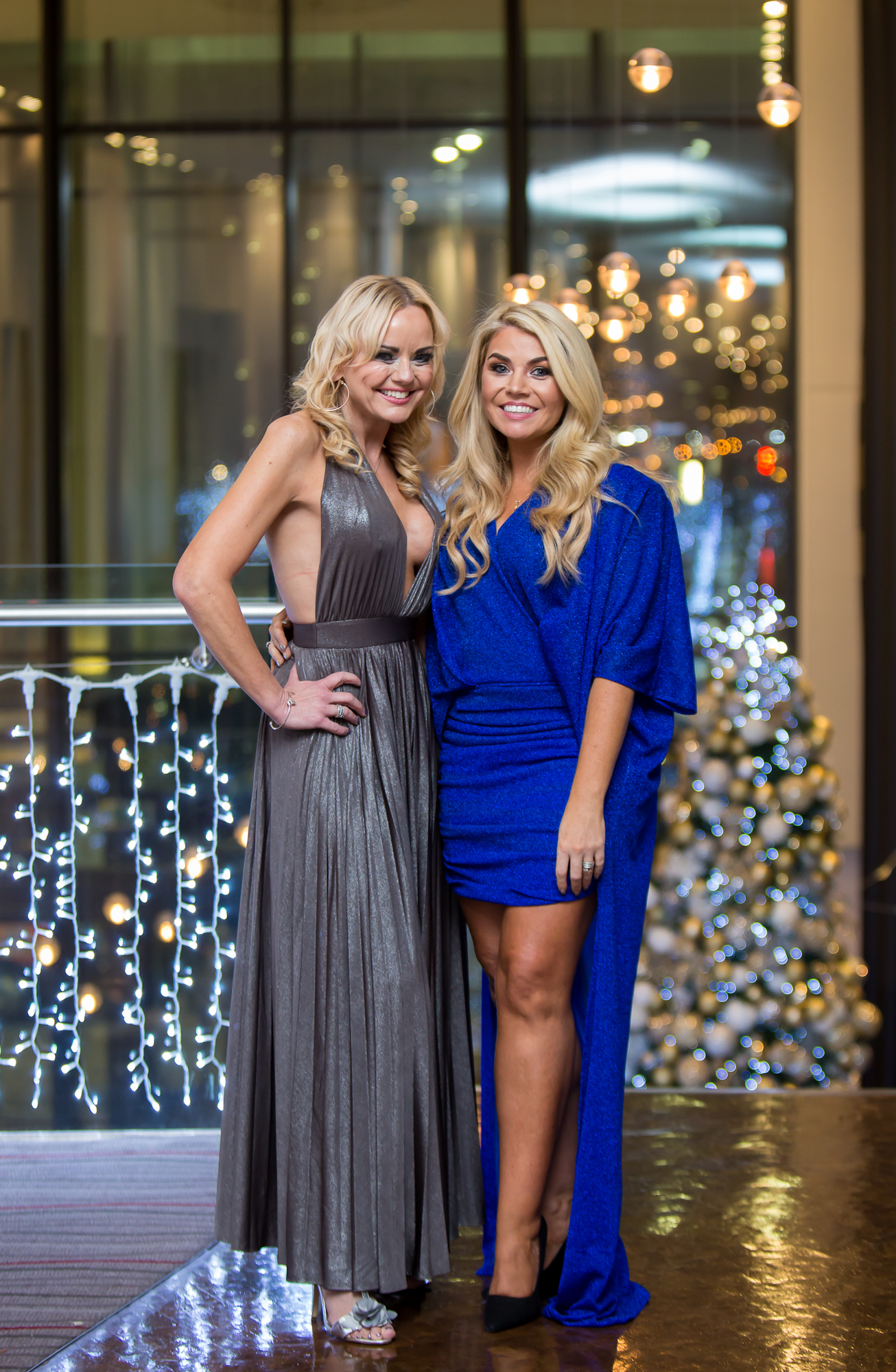 Radio City 2 and Guide Liverpool’s Claire Simmo presented the 90’s decade on the night and reflected on her time in the studio, she said: “Radio City has been a huge part of my life having grown up listening to it and always dreaming of being part of this station.

“To be part of the Radio City family for 20 years, working with some incredible people who are now lifelong friends. I cant imagine anyone or anything more worthy of this accolade.”

Radio City News & Sport Editor, Steve Hothersall concluded his speech with: “We promise that we will continue to wake the people of Liverpool from their beds, work beside them, drive them home, party with them and put them to bed.  We will be their company in lonely times, a messenger, a comedian, a campaigner, a teacher, a friend.

“And from high in the beacon, Radio City will continue to shine bright, shout loud and always be the soundtrack to Liverpool’s life.”

We’d like to offer our huge congratulations to everyone at Radio City on their, much deserved Freedom of the City Award. Here’s to many more years at the top of the tower.

We want to hear your favourite memories from Radio City’s 44 year history. Are you a Radio City comp winner? Have you pranked Pete? Have you been on air with Rossi? Drop us a line on Twitter, Facebook or Instagram and we’ll share the best on our socials.

This is the full speech delivered by Radio City Talk’s Steve Hothersall….

We’d all agree that Liverpool is a place like no other in the world.  In fact in 2008 as Capital of Culture we declared ourselves “the centre of the universe”!  That’s us scousers! Never shy.

To be fair though…Our city is graced with graces, heavenly cathedrals, stretching coastline and historic dockland, with a port that connects us to the world.   And as a radio station Radio City has been privileged to be the voice and song of this city for the last 44 years. I know I speak for all my colleagues past and present that pride does not come close to how we feel to receive this honour.

As I said, Liverpool is a city like no other. It is a pool of life.  Filled with passion and pride, it is a place that defies its hard times with humour and wit.  It had seen tragedy and heartbreak but remains always dignified and united.  It is resilient and strong, yet humble and kind.  And our station is deeply rooted here, right at the centre of this place.

Our city is who ‘we’ are.  The station merely reflect the city’s greatness.  So it is with thanks to our city ‘our audience’, that Radio City is one of the UK’s most successful and popular radio stations.  It truly is a partnership.  We recognise that Radio City is nothing without the people that listen. But also that the station would be nothing without ‘our’ people. Every member of our staff on-air and off, has spirit, talent, creativity, character and heart. We are ‘teamcity’ and to be here today is an honour that is shared by every one of us.

Our journey has been incredible. In 44 years we’ve enjoyed record listener figures!  We’ve been at the forefront of commercial music, and we’ve collected every single award the radio industry has to win. We’ve raised millions of pounds for our most vulnerable children. We’ve championed our communities. Revered and respected our journalists have broken ground breaking stories and campaigned for justice.

Our presenters have been legendary and loved by our audiences. We’ve held our plums with Billy and Wally, even seen the Butler dynasty turn house music scouse. Snelly, Seedy, Rossie, now ‘our’ Leanne & Dave.  No one serves up breakfast like Radio City!  Our presenter line up has always been the best, every show, every day!  And we’ve never been afraid to speak our mind – have we Mr Price!

Just like our listeners we wear our heart on our sleeve and speak with a ‘la’ in our lilt.  Welcoming and warm, everyone who tunes in becomes a part of the Radio City family.  It is not surprising then that Radio City is so successful.  We are a music station in the city where music was born.  It is in our blood.  And sport, I couldn’t not mention it could I!  Red or Blue, Radio City has made legendary sporting radio history too.  Our sports broadcasting has been recognised worldwide.

So, 44 years of Radio City. That’s nearly four hundred thousand hours of output alone.  That makes it impossible to recount every amazing, inspiring, magical moment we have broadcast.  A few we’ll all remember. Our work with the ‘Justice For The 96’ campaign for Hillsborough. Mental Health Monday and the 24 hour Mental Health Marathon. Bobby Zones a campaign to create slower speed limits around schools.

Perhaps the moment a winner cried live on air and announced the prize money she’d just won would go to pay funeral bills for her husband who had just passed away.  And in that moment Leanne and Dave were simply Leanne and Dave and we were all moved.  The time the studio was left empty as Pete Price sped from the tower to save a listener threatening his own life.  There have been incredible moments.

And the fun though.  Oh there’s been so much fun!! Our famous ‘Live In’s’. Bed. Car. Bath! Our sell out ‘LIVE’ arena gigs that bring the biggest artistes and the hottest music to Liverpool. Mission Christmas Toy Appeal.  Match days and derbies, Champion’s League Istanbul! The Legends Show Live. 24 hour Breakfast shows. The callers, the car stickers, the shout outs and wind ups.  The Radio City Jingles…I won’t sing!

On air we’ve had a ball, but it’s not just music, news and sport that makes Radio City the incredible station that it is.  Radio City has played its part in increasing the prosperity of the region.  In touch and influential in the economy, we are the leading advertising medium. We know businesses young and old, large and small, we’ve helped build them, support them and grow them.  In everything we do Radio City is creative, inventive and bold.

So from Terry Smith forging our beginnings in Stanley Street’s basement studios, today our home is the Beacon.  A tower that stands tall and constant in an ever evolving city.  Like a giant sundial the beacon casts its ever moving shadow across our magical city every hour of everyday. Just as we broadcast 24 hours. Over the years we’ve launched sister stations, and today the Radio City brand broadcasts the greatest hits on Radio City 2 and gives Liverpool rock, sport and talk with Radio City Talk.

We promise that we will continue to wake the people of Liverpool from their beds, work beside them, drive them home, party with them and put them to bed.  We will be their company in lonely times, a messenger, a comedian, a campaigner, a teacher, a friend. We will laugh with them, cry with them and above all we will make their world a more joyful place.

And from high in the beacon, Radio City will continue to shine bright, shout loud and always be the soundtrack to Liverpool’s life.  We thank you for this honour, it is both humbling and inspiring and we promise to continue to serve our beautiful city and its amazing people.