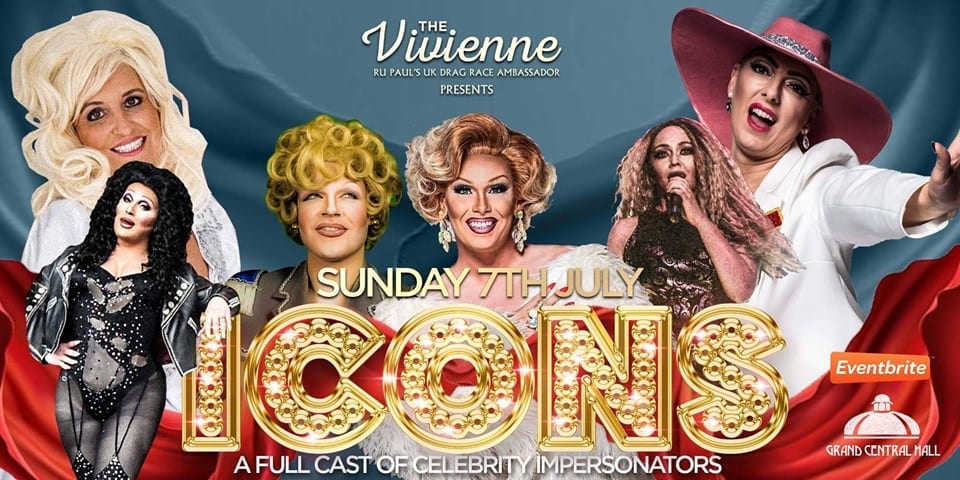 Drag Race fans get ready to get clicking as tickets for The Vivienne’s Liverpool tour go on sale.

RuPaul’s Drag Race has been a mainstay on TV for 10 years and has audiences of millions across the world, including right here on Merseyside. Now we’re getting our very own piece of the sassy action as UK Ru Paul Drag Race Ambassador, The Vivienne comes to Grand Central Hall in Liverpool for the new tour ICONS on Sunday 7th July 2019.

The Liverpool show will be The Vivienne’s biggest to date with 5 other, handpicked celebrity impersonators joining the line up. You’ll be able to see Cher, Lady Gaga, Bette Midler, Beyoncé and Dolly Parton, all under one, impressive domed roof. The showcase will be topped off by the North East’s Queen of Comedy; Miss Rory as your host and a host of fabulous dancers.

The Vivienne said: “I’ve done a few events here in Liverpool, mainly Drag shows and Comedy Roasts which have been a huge success, but I’m ready to take my shoes to a bigger stage and Grand Central Hall is just the perfect place.

“Being the UK ambassador of RuPaul’s Drag Race is just the best thing that ever happened to me. It was the pinnacle of my career and allowed me to take Drag further in the UK, to evolve and bring it more mainstream.”

Grand in nature as well as in name, this Grade II listed architectural gem of a building on Renshaw St, has been a go-to destination for eating, drinking and sleeping in the city centre since it’s relaunch in 2018.

A former Methodist church, former cinema and former home to the Liverpool Philharmonic orchestra, to name but a few of the building’s past iterations, Grand Central now houses a 47-room hotel, a bustling food bazaar and it’s crowning glory, the 1,100 capacity Grand Central Hall.

Ryan Edwards, Operations Director of Grand Central Hall said: “Here at the Grand Central Hall we are very excited to announce this show and the collaboration with The Vivienne. This is a show not to be missed and will become a monthly event, in the city, for all to enjoy. There are only limited tickets available so book now to avoid disappointment.”

To get your hands on tickets for The Vivienne’s Icons event at Grand Central Hall, head to www.eventbrite.co.uk or click here. You can also get more information about what’s on at Grand Central Liverpool here.